Accessibility links
Cementing Becomes One Focus In Gulf Oil Probe Just 20 hours before the accident, a team from Halliburton was pumping cement into the Deepwater Horizon well. The company says it did its job correctly, but a federal investigation is under way. 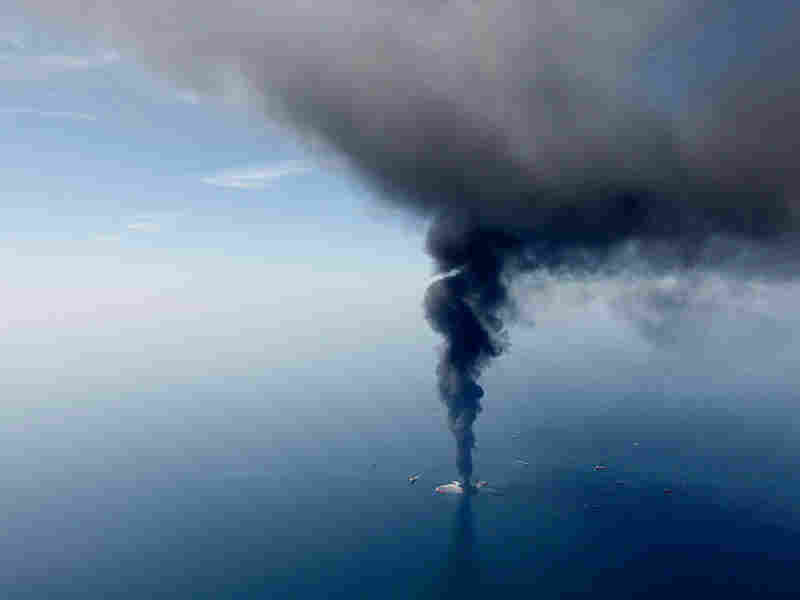 The Deepwater Horizon oil rig is seen burning on April 21 in the Gulf of Mexico. Federal investigators have turned their attention to the cementing process that occurred on the oil rig before the explosion. Gerald Herbert/AP hide caption 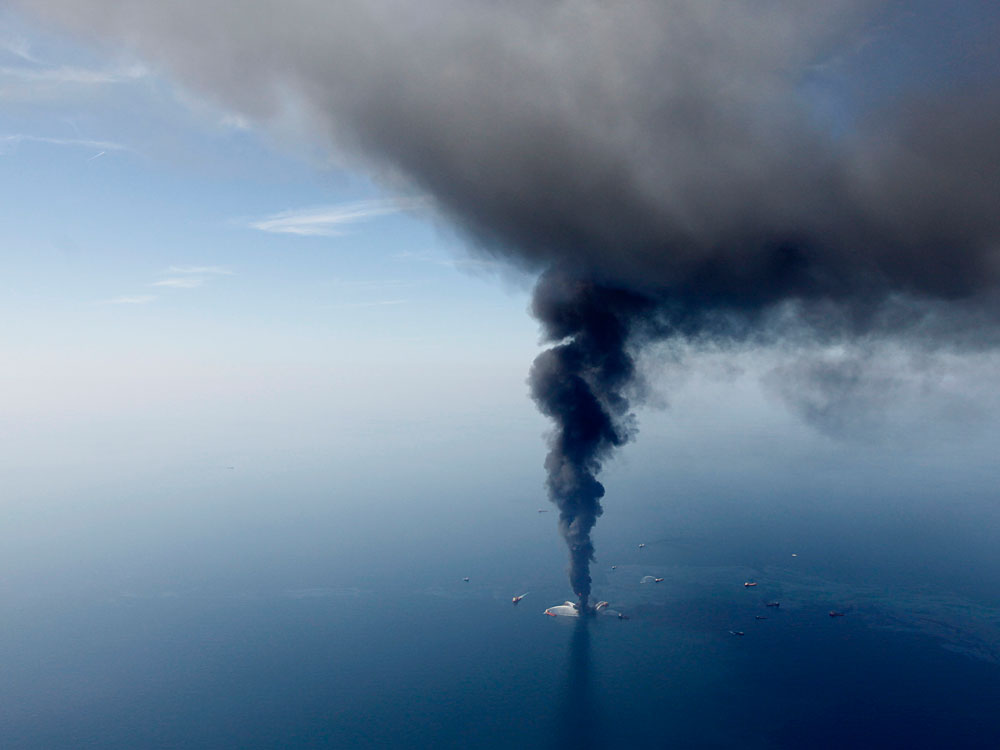 The Deepwater Horizon oil rig is seen burning on April 21 in the Gulf of Mexico. Federal investigators have turned their attention to the cementing process that occurred on the oil rig before the explosion.

A cementing job done by a Halliburton crew just hours before the oil accident in the Gulf of Mexico has emerged as a central focus of the investigation.

Bad cementing work has triggered leaks in the past, and some experts say it's hard to imagine a scenario where it was not part of the problem at the Deepwater Horizon well, too.

"That will certainly be a central part of the investigation," says Elmer "Bud" Danenberger, who recently retired as the chief of offshore oil regulations for the U.S. Minerals Management Service.

Still, experts say that even if cementing contributed, it was only one of a series of failures that resulted in an explosion that killed 11 people and sent millions of gallons of oil spewing into the Gulf of Mexico.

Halliburton, the company responsible for the cementing, told members of Congress that it did its job correctly.

And it probably will take a long time before investigators know what, if anything, went wrong with the cementing, but experts and lawmakers have a lot of questions.

"I am suspicious that the cementing job played a role in this," says Rep. Ed Markey (D-MA), who heads the House Energy and Environment Subcommittee.

But he says he will withhold judgment pending a government inquiry.

"This is going be the biggest investigation that's taken place since Three Mile Island," Markey adds, referring to the 1979 nuclear plant meltdown. "We will have to go back and ensure that whatever happened never happens again."

Cementing Before The Explosion

Just 20 hours before the accident, a team from Halliburton was pumping cement into the Deepwater Horizon well.

There was already a pipe in the well for the oil to flow through, but no oil was supposed to flow yet. Cementing, one of the last steps in well construction, seals the crack between the pipe and the wall of rock. Crews pump the cement through the pipe, but it ends up on the outside of the pipe, in the space between the pipe and the rock wall. The cement also caps the bottom of the pipe.

Experts say there are several ways to botch a cement job. For instance, you could mix it incorrectly or not pump enough of it into the well.

If oil and gas are pushing through the rock into the drill hole anywhere along the length of the pipe, it might create a pocket that the cement would not fill in.

If that was the case, operators should have known about it because they would have had cement left over. It is kind of like baking -- if the batter doesn't fit in the pan, it's a clue that something is amiss.

When drilling a well, the presence of leftover cement is a signal that pressure is rising back up the hole, probably from a mixture of oil, gas and other stuff.

"If some oil and gas were to invade the well, kind of get around the cement, if you will, before it dried, and then work its way up the well, then you could have a problem," says oil industry veteran Bruce Bullock, the director of the Maguire Energy Institute at Southern Methodist University.

If there are gaps in the cement or it does not set correctly, oil and gas could surge up and out of the well. And if there's enough of it, it will explode, like Deepwater Horizon did.

A blowout preventer should stop a surge from causing a leak, but in this case it did not.

Cementing Implicated In Other Accidents

Still, Danenberger, the former regulator, says a cementing job should not create such a problem to begin with, because cementing is a standard part of drilling a well, and not even one of the riskiest steps.

"It's pretty established technology, and if you follow the right precautions and you monitor your information, it should be straightforward," Danenberger says.

But in recent years, cementing problems have become more prevalent.

Cementing contributed to half of the 39 U.S. blowouts between 1992 and 2006, according to a report that Danenberger co-authored in 2007.

After that, the government pushed to change cementing standards, but let the industry write them.

A cementing job done by Halliburton is also implicated in an Australian oil rig disaster last year that gushed oil into the Timor Sea for 74 days.