Accessibility links
Launching a Life with $10 and a Dream Growing up in Tennessee in the 1940s, Larry Young was determined to get off his father's farm and do something else with his life. With $10 and a will to do whatever it took, Young set off for college.

Listen
Launching a Life with $10 and a Dream 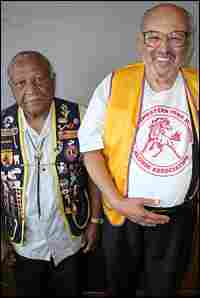 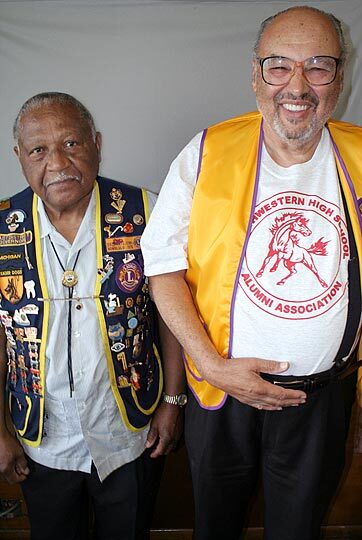 Larry Young (left) told his story to his friend Clyde Cleveland in Detroit.

Growing up in Tennessee in the 1940s, Larry Young was determined to get off his father's farm and do something else with his life. His father wanted him to follow in his footsteps and refused to help Young go to college.

So, with $10 in his pocket, Young set off for Tennessee State University, determined to register.

"I walked up to the bursar's office, threw my two $5 bills up there on the counter," Young says.

"I plan to make something out of myself," Young told the school official.

Young was taken to see the school dean, who asked if he could drive a truck. Young had never driven before, but said yes anyway.

He got a job hauling trash from a girl's dormitory to the incinerator.

"I didn't know what I was doing, but by the grace of God, I did it. That took care of my tuition, but they didn't know I didn't have a place to stay."

He found a place to sleep — between two mattresses in the dormitory.

"One morning, the matron of the dormitory came up and saw me, and it scared her. She took me before the discipline committee — two women. I shall never forget, both of them broke down and cried when I told them my story. And from that day forward, I never looked back — they gave me everything that I needed.

"That's why I've always felt that, as long as I live, I was going to use my life to reach out and touch another life with hope."

Young is proud to say he was the first African American to be the director of food sanitation for the Detroit Health Department.

Young remembers a female high school student who came to work at the department. "She was hostile. She didn't want to be anything. She came from a family of seven — some of them were on drugs — and she had every right to be mad. So I sit her down and I talk to her.

Young ended up hiring her. "It's been over 19 years ago. She has two teenage kids, has a wonderful husband. She's an executive secretary today. That is the greatest thing I've ever done in my life.

"If you just put your arms around people, they will go forward in life — and that's my mission."

Young recorded his interview as part of StoryCorps Griot, an initiative that travels the country collecting the recollections of black Americans. This segment was produced for Morning Edition by Selly Thiam. The senior producer for StoryCorps is Michael Garofalo.