Accessibility links
Will A Boycott Cause Arizona Real Pain? Arizona's new immigration law has launched a chorus of calls to avoid the state. Already, professional associations are canceling meetings and a few cities are banning official travel there But for a boycott to really work, observers say, it needs staying power.

Will A Boycott Cause Arizona Real Pain?

Will A Boycott Cause Arizona Real Pain? 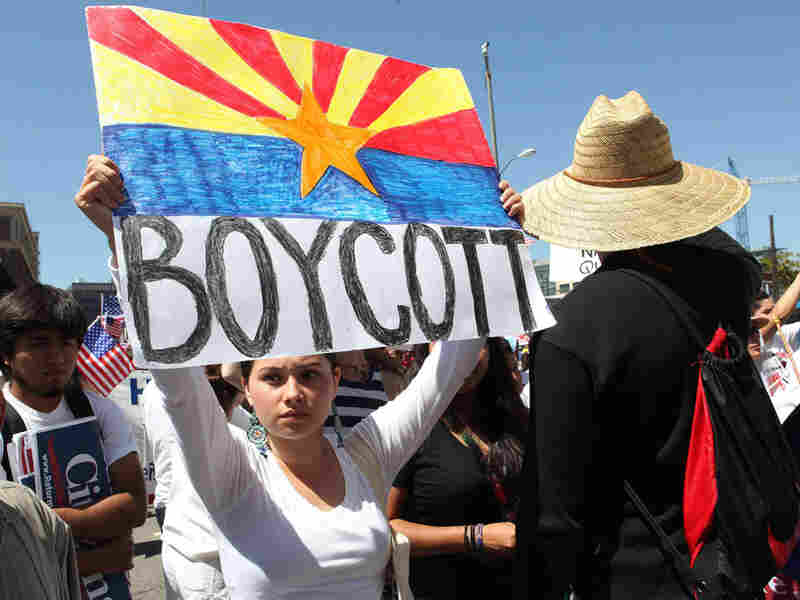 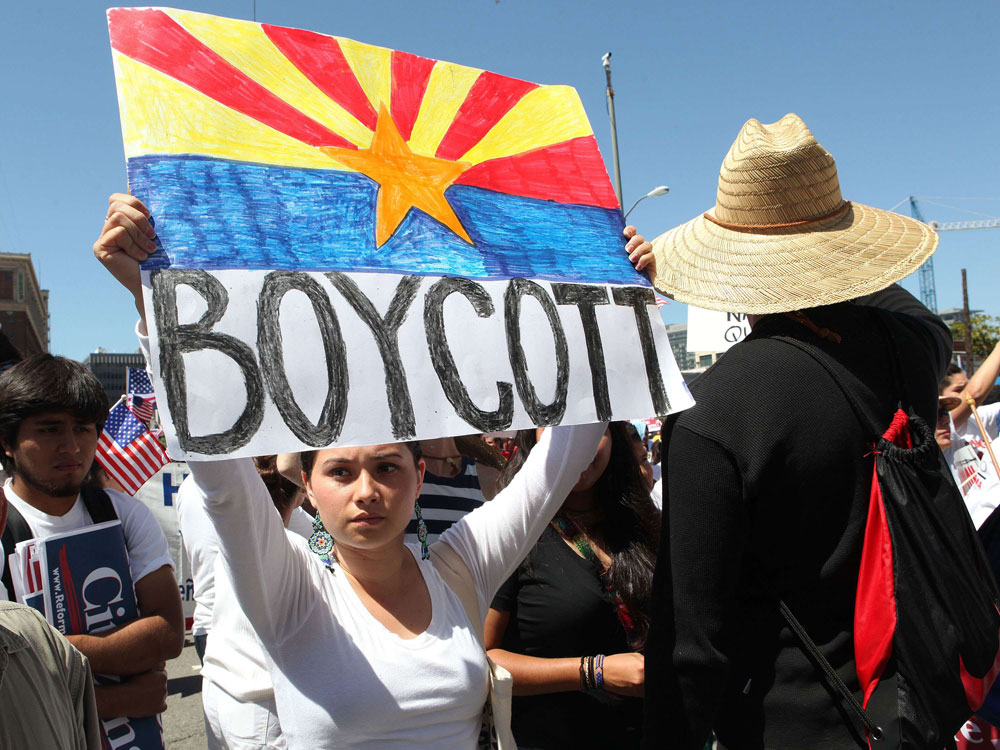 Angered by Arizona's crackdown on illegal immigrants, thousands of marchers rallied at Los Angeles City Hall during a May Day march to urge immigration reform.

The fraternity Alpha Phi Alpha is historically African-American, but it has members from all races, including Hispanics. After Arizona enacted a tough new immigration law, the fraternity says it was concerned those brothers -- or others visiting from abroad -- could be unfairly targeted during its annual convention in Phoenix.

So Alpha Phi Alpha moved its July meeting to Las Vegas -- making it one of at least 19 groups that have decided to take their business out of Arizona in the wake of the new legislation.

The law, which requires police to question the immigration status of anyone they have a reason to believe might be in the country illegally, has triggered calls for boycotts from numerous civil rights groups, as well as Raul M. Grijalva, a Democrat who represents Tucson and the southwest corner of the state in Congress.

Those calls, like similar protests in the past, have drawn considerable attention from the media. The question organizers face is whether a boycott will hurt the state sufficiently to change its policy. There's already evidence that the boycott is affecting behavior, but for boycotts to matter, observers say, they need staying power.

Hotel owners in Arizona have already expressed concern about the effects a growing boycott could have on tourism, which is an $18 billion business in the state. "We know that people are canceling because some of the chains have gotten hate mail saying they're canceling individual trips," says Joseph McInerney, president of the American Hotel & Lodging Association.

Several cities, including St. Paul, Boston and Oakland, have decided to ban official travel or business dealings with Arizona. And in the midst of Internet buzz about a boycott of its products, the makers of AriZona iced tea felt obliged to release a statement pointing out that the company is based in New York.

"Reputation is important to business, and if you get a bad reputation it drives people away," says Jeff Dumas, a professor of economics and political economy at the University of Texas at Dallas.

Losing Not Just Dollars But Face

But anger has to be sustained, not just widespread, for a boycott to put a noticeable dent in the bottom line. After all, hardly a day goes by without someone launching a protest petition on Facebook or elsewhere online, calling on people to express their ire by clicking on a link.

Technology makes it easier for people to offer an opinion, but also makes it easy to dismiss such gestures because they can be superficial, Dumas says.

"The Internet allows you to get more information to people, but it has to leave the virtual world for the real world in order to cause real pressure," he says. "If you start seeing major professional associations canceling meetings, then there seems to be teeth in it."

It's Meetings That Matter

The big meetings are what cost you when it comes to a travel boycott. While individuals and families might decide not to visit a targeted area, the effects of that are negligible and hard to measure, according to tourism officials. And most small groups of business travelers are going to make their trips regardless of their politics.

After the NAACP launched a boycott on travel to South Carolina in 1999 in protest over the display of the Confederate flag atop the state Capitol dome, hotels and other businesses immediately heard from meeting planners who were rethinking their plans, says Marion Edmonds, communications director for the South Carolina Department of Parks, Recreation & Tourism.

"If you're earning your living by planning meetings for a large, diverse organization, you're going to be concerned, rightly, that you don't make any decisions that are offensive to a significant portion of your membership," he says.

Perhaps it was not a surprise that the first group to announce it would cancel a scheduled meeting in Arizona was the American Immigration Lawyers Association. But to be successful, boycotts must go beyond groups with clear political leanings. It has to become embarrassing even for apolitical outfits -- a manufacturing firm, say -- to visit.

And a city or state knows it's really in trouble when a high-profile event gives way to boycott pressure.

It's happened to Arizona before. The state lost the 1993 Super Bowl out of protest of its failure to honor Martin Luther King with a paid holiday. That contributed greatly to an estimated $300 million loss of business to boycotts over the MLK Day issue. Arizona was awarded the 1996 game after voters approved a holiday in 1992.

Right now, groups targeting Arizona are lobbying Major League Baseball to move the 2011 All-Star Game out of Phoenix. They also hope to convince the two major political parties to look elsewhere when picking their 2012 convention cities this spring. (Phoenix is one of three finalists for the Republican convention and has been rumored to be in the running for the Democrats as well.)

If an event of real magnitude gets canceled, that may do the most to erode the image of the jurisdiction being boycotted. If you're in the tourism business, you don't want a negative association to come to mind when your state gets mentioned.

"Every state -- and if they say different, they're not telling the truth -- every state is concerned about incidents or events or issues that could negatively impact their invitation to people to visit," says Edmonds, the South Carolina official.

Immigration Law One Of Many Changes In Arizona May 6, 2010