Accessibility links
Stressful Decision? Washing Hands Could Help Soothe A new study finds that hand washing can help relieve the stress from inner conflict. When forced to choose between two good options, people often stress out about the decision. In the study, those who washed their hands afterward didn't express signs of being conflicted. It seems they didn't feel pressured to justify their choice. 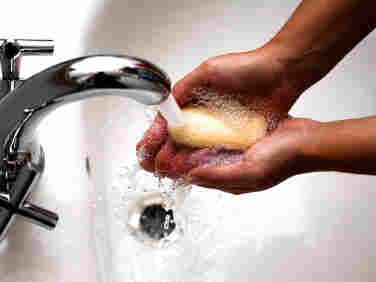 In the study, people who washed their hands after making a tough choice seemed less worried about it. iStockphoto.com hide caption

Soaping up your hands may do more than just get rid of germs. It may scrub away the inner turmoil you feel right after being forced to make a choice between two appealing options.

That's according to a new study on the psychological effects of hand washing in the journal Science. The study builds on past research into a phenomenon known as "the Macbeth effect."

It turns out that Shakespeare was really onto something when he imagined Lady Macbeth trying to clean her conscience by rubbing invisible bloodstains from her hands. A few years ago, scientists asked people to describe a past unethical act. If people were then given a chance to clean their hands, they later expressed less guilt and shame than people who hadn't cleansed.

This finding fascinated Spike W. S. Lee, a psychology researcher at the University of Michigan, Ann Arbor. He wondered if hand washing could restore more than just a sense of moral purity. After all, "cleanliness is next to godliness," but people also often talk about "starting over with a clean slate."

"Maybe there is a broader phenomenon here," says Lee. "Anything from the past, any kind of negative emotional experiences, might be washed away."

Washing Away The Stress Of Decisions

He and a colleague named Norbert Schwarz decided to test hand washing's effect on one kind of bad feeling: the lingering tension we feel after being forced to choose between two attractive options, because picking one option makes us feel that we've lost the other.

Psychologists know that people usually try to soothe this inner conflict by later exaggerating the positive aspects of their choice. "In other words, after they make the choice, they will like the chosen option more than before the choice," Lee explains.

To see if hand washing could ease people's tension and do away with the need for this after-the-fact justification, the researchers gave some students some mock "consumer surveys."

They had students rank 10 different music CDs. Then, as a token of appreciation, the researchers offered students one CD as a take-home gift -- they had to choose between their fifth- and sixth-ranked CDs.

Some students then lathered up with liquid soap, supposedly to evaluate this product. Others only looked at the soap or sniffed it.

Later, the students again had to rank all the music. People who didn't wash their hands had the normal response -- they scored their take-home CD higher than they had the first time around, suggesting that they now saw it as even more attractive than before.

But this wasn't true for the hand washers. They ranked the music about the same.

"They feel no need at all to justify the choice," says Lee.

Does Washing Help In Long Run?

The researchers did another version of this experiment and found the exact same effect after people selected a jar of fruit jam and then rubbed their hands with an antiseptic wipe. "Apparently, you do not need water and soap," says Schwarz -- any kind of hand cleaning will do the trick.

But the implications of all this just aren't clear. Schwarz says it's too soon to know whether people should head for a sink after making a tough choice.

He says washing may help decision-makers by scrubbing away mental turmoil. But perhaps if they don't go through the usual post-decision process of justifying their choice, they might feel more remorse in the long run.

"We may not do you a favor when you wash your hands and you're not doing that cognitive work to make your decisions appear in the best possible light," Schwarz explains, adding that this is something they want to investigate in future studies.