Accessibility links
Previous BP Accidents Blamed On Safety Lapses The Gulf of Mexico oil rig explosion and fire that killed 11 men and triggered a massive oil leak is not the first time BP has had to contend with a horrible accident or spill. In the past five years, two high-profile accidents have occurred at BP facilities -- one at a Texas refinery, another at a pipeline in Alaska's Prudhoe Bay. 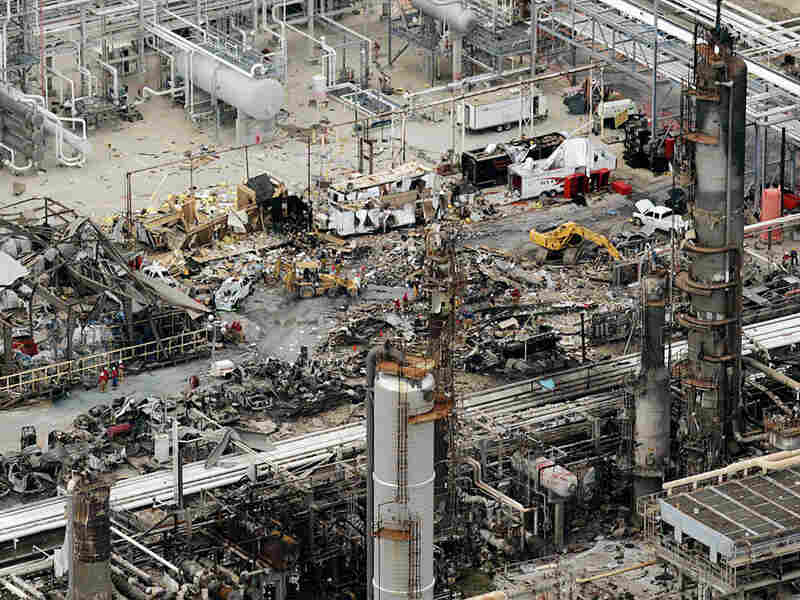 A view of the wreckage at the BP facility in Texas City, south of Houston, a day after the explosion on March 23, 2005. William Philpott/AFP/Getty Images hide caption 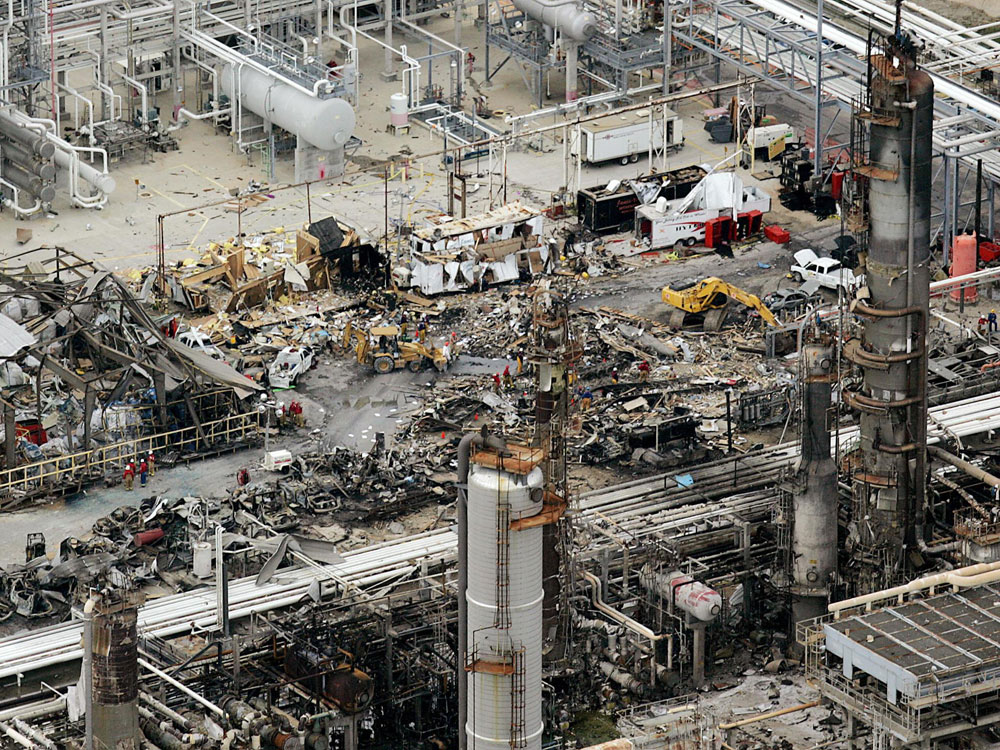 A view of the wreckage at the BP facility in Texas City, south of Houston, a day after the explosion on March 23, 2005.

The Gulf of Mexico oil rig explosion and fire that killed 11 men and triggered a massive oil leak is not the first time BP has had to contend with a horrible accident or spill.

In the past five years, two high-profile accidents have occurred at BP facilities -- one at a Texas refinery, another at a pipeline in Alaska's Prudhoe Bay.

In 2005, at a refinery in Texas City, Texas, 15 BP employees died and 170 were injured after a unit that manufactured jet fuel exploded. Temporary trailers had been placed as offices next to extremely volatile units. During the subsequent investigations, evidence emerged that BP management was focused on cutting maintenance and capital spending costs at the company's refineries.

In fact, BP managers' performance was measured in part by their ability to meet these goals. A blue-ribbon panel headed by James Baker III concluded that BP had a "false sense of confidence" about safety.

Brent Coon, who was the lead lawyer that sued BP on behalf of the families of the workers who were injured and killed, says that at the time of the accident in Texas City, the company's safety record in the U.S. was poor.

"The reality is that BP has a long history of underinvesting and reinvesting in their infrastructure," Coon says. "Deferred maintenance causes things to just wear out and not be replaced. And they're just a fix-it-as-it-breaks type company."

After the Baker report was released, John Browne, BP's CEO at the time, said: "BP gets it and I get it too -- I recognize the need for improvement." But in court, Coon says BP fought to deflect blame down the chain of command while denying there were any larger issues about the company's corporate culture and its approach to safety.

"They admitted it was their fault; they didn't have any way of denying it," Coon says. "But they blamed some low-level workers and said they didn't do their job well. And the reality was the low-level workers had very little to do with it. It all had to do with the fact that the plant was wore out and run down and they were operating it without the alarms and safety features other plants had in place."

This was not the only BP accident that called the company's approach to safety and commitment to maintenance into question.

In 2006, the BP pipeline at Prudhoe Bay in Alaska burst, spilling hundreds of thousands of gallons of heavy crude. After first denying culpability, BP eventually turned over internal e-mails to investigators that implicated the company. Instead of sending cylindrical probes called pigs through the pipeline to clean and inspect the pipes for corrosion, BP virtually abandoned the practice to cut costs.

After the spill, BP pleaded guilty to criminal negligence and paid a $20 million fine. But Bud Danenberger, former head of the Interior Department's Office of Offshore Regulatory Programs, says BP has done better in the past three years.

"My picture of BP comes from the safety and performance data that I looked at for many years," Danenberger says. "Especially in recent years they've had an outstanding safety record, very few violations and very few incidents."

But all that changed when the Deepwater Horizon rig blew up and sank two weeks ago. President Obama insisted that BP pick up the bill for the cleanup. Chief Executive Officer Tony Hayward says BP will compensate legitimate claims for damage.

But in the past few days Hayward has insisted that the blame for the accident and for the deaths of the 11 workers lies not with BP but with the contractor it hired to operate the drilling rig -- Transocean.

The blowout preventer, however, was not manufactured by Transocean but by a third company, Cameron, which specializes in this kind of highly complex deep-water-drilling equipment.

If Hayward's comments are an attempt to kick accountability away from BP management, it is an echo of the legal strategy the company adopted in the Texas City refinery case. Those legal actions ended with BP paying out over $1 billion in claims.