Accessibility links
For Sale: Michael Crichton's Pop Art Collection On May 11 and 12, Christie's will auction nearly 100 works of art from the collection of the late author. Well known for writing novels like Jurassic Park and producing television shows like ER, he was also an expert on pop artists like Jasper Johns. 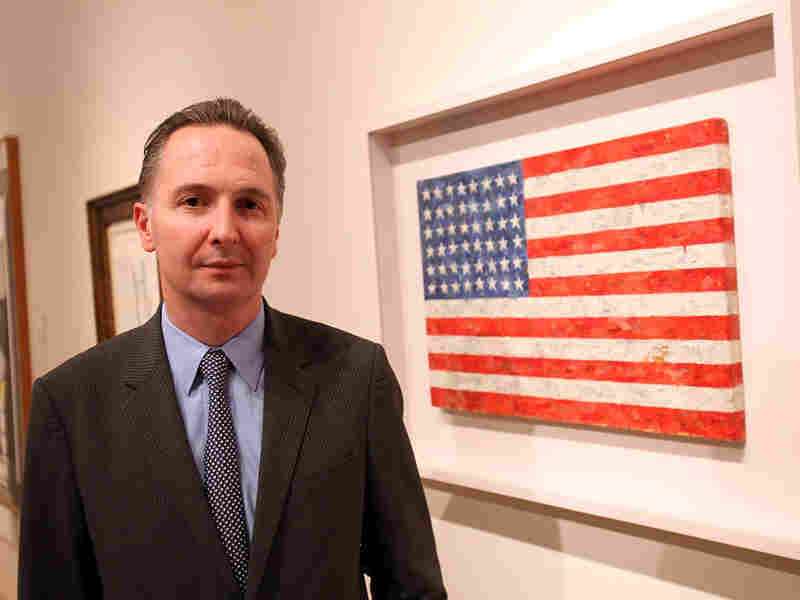 Brett Gorvy, deputy chairman of Christie's Americas, in front of the Jasper Johns painting Flag. The painting is part of late author Michael Crichton's collection, which will be auctioned off Tuesday and Wednesday. Jesse Grant/Getty Images hide caption 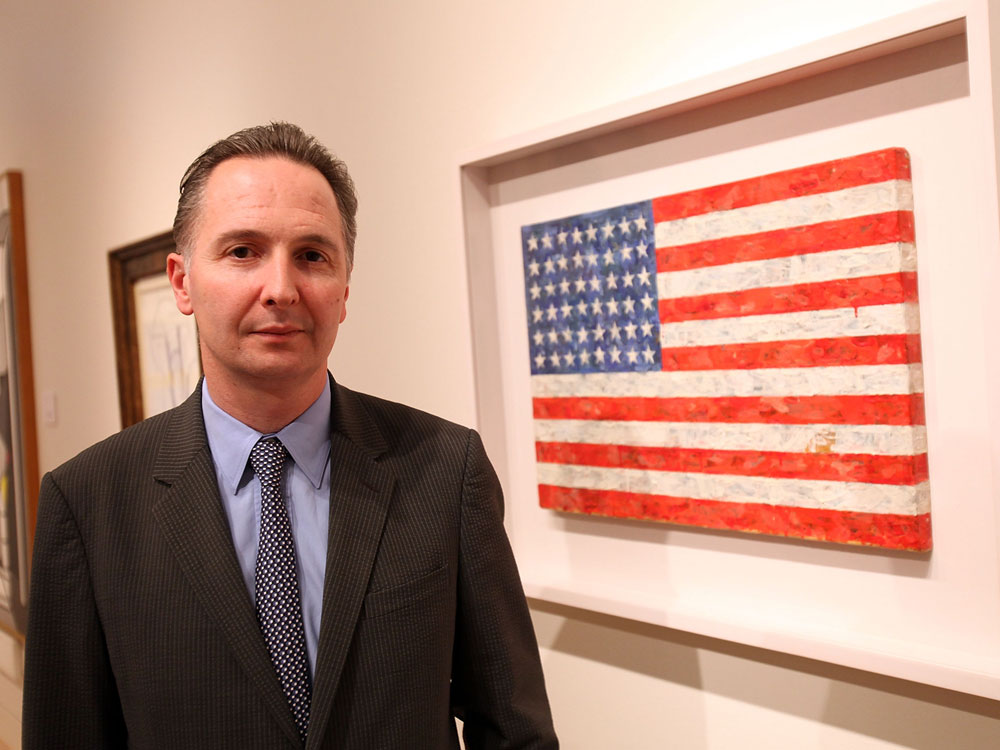 Brett Gorvy, deputy chairman of Christie's Americas, in front of the Jasper Johns painting Flag. The painting is part of late author Michael Crichton's collection, which will be auctioned off Tuesday and Wednesday.

The extraordinary art collection of author Michael Crichton, who died in 2008, is being auctioned at Christie's. Crichton wrote techno thrillers and created movies and television shows, but he was also a doctor. Included in the auction are more than 90 works by Jasper Johns, Robert Rauschenberg, Pablo Picasso and Roy Lichtenstein.

It turns out that the creator of Jurassic Park and ER had a very special relationship with modern artists and their work, especially with pop artists. Though Crichton's books, films and TV shows have been seen by hundreds of millions, very few people know that he was one of the foremost experts on the work of Johns and that he collected and befriended many artists.

Crichton became fascinated by modern art when he came to Los Angeles in the 1970s to direct movies. At the time, artists like Lichtenstein, Rauschenberg and Johns had teamed up with the printer Ken Tyler, who founded the print shop Gemini G.E.L. in 1966. Tyler says Crichton and these artists had something in common: a fascination with the way things work.

"The pop artists -- the Oldenburgs and the Johns -- were part of a new generation of artists," says Tyler. "They were interested in technology and process and as they became popular, one of the things that stood out was printmaking."

Tyler says these artists would spend two or three weeks at his print shop, and Crichton would often show up, too. Crichton established a particular relationship with Johns, whose American flag paintings are considered the first icons of pop art.

Crichton bought the most famous of Johns' flag paintings directly from the artist some 30 years ago; he kept it in his bedroom in Beverly Hills and rarely lent it out to museums. It was last seen in public 18 years ago at an exhibition in London. Crichton and Johns became good friends, and Crichton became such an expert in Johns' work that he wrote the liner notes for the Whitney Museum's exhibition of Johns' work in 1977. An expanded book published by Harry N. Abrams in 1994 is considered by many to be the definitive text on the artist.

"What they saw in each other was this amazing respect," Brett Gorvy, the deputy chairman of Christie's Americas, says. "Just two people with brilliant minds who could meet at this level, but they also saw in the way that they worked that everything was pushing the boundaries." Gorvy says that both Crichton and Johns looked at everything as a search, as a question. Every painting required the viewer to search. 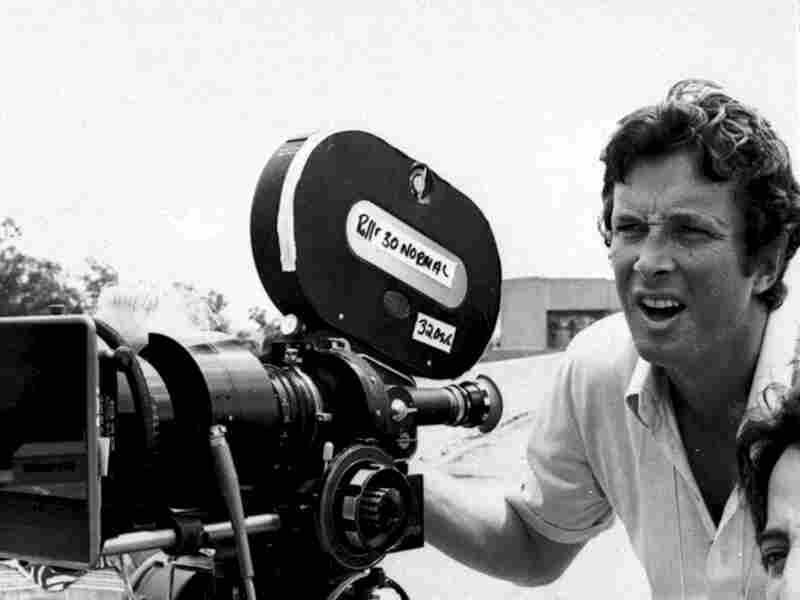 Michael Crichton, photographed on the set of the movie Coma in 1977. During the '70s, Crichton moved to Los Angeles, where he met pop artists like Jasper Johns. AP hide caption 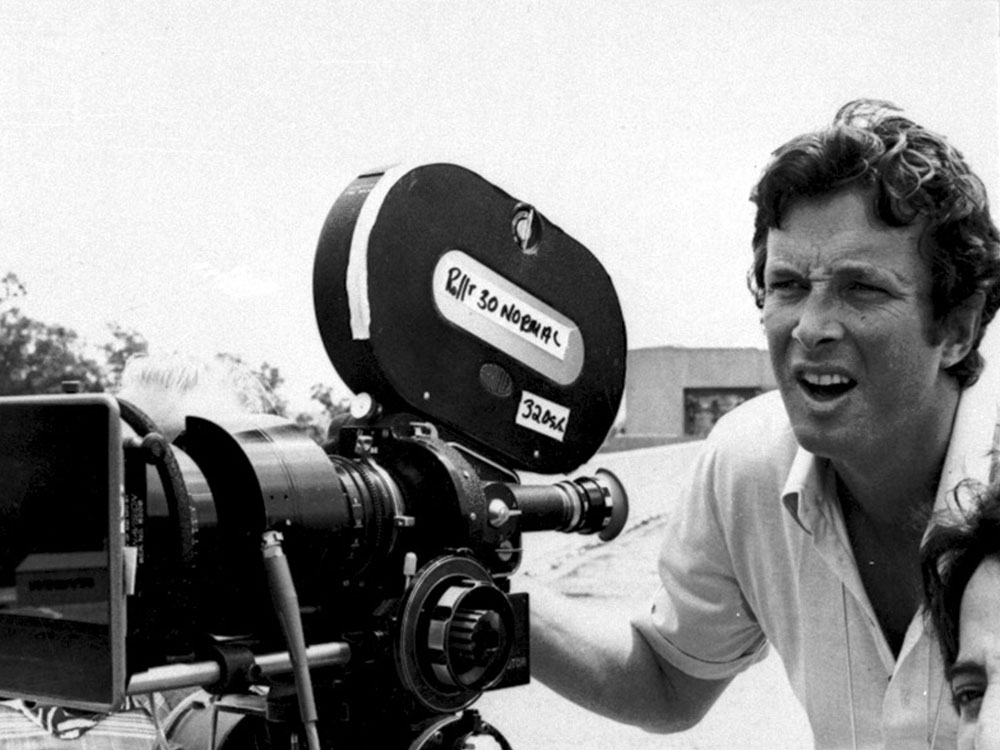 Michael Crichton, photographed on the set of the movie Coma in 1977. During the '70s, Crichton moved to Los Angeles, where he met pop artists like Jasper Johns.

"Even the most obvious image, such as the flag, raised so many different questions and so many paradoxes: Is this a flag? Is this a painting of a flag? Is this an object? It's three dimensional. Is this patriotic? Is this political?" Gorvy says. "[Johns] chose something which is ready-made, which is already in the public domain, that was an abstract image: It is stars, its stripes, its colors, bands. There was no political intention on his side, but what it did was unleash a whole new avenue for art. It allowed the pop artists to come into being. Without the flag you wouldn't see Warhol; you wouldn't see Lichtenstein. He truly moved the whole boundary as to where art was at that moment."

Tyler says Crichton bought what he liked and researched it thoroughly. He befriended many of the artists whose work he collected. He was not someone, Tyler says, "who collected to have a shrine built to him. He was a collector who got the art that he liked and lived with it and enjoyed it, and he constantly moved it around."

Crichton employed art handlers to change the placement of a painting in his house or to move it to a room with a different light. One of them, Owen Casey Rothstein, who works for Fine Art Shipping, remembers a painting by Claes Oldenburg that he moved at least seven or eight times. In Crichton's home, he said, "you would take a piece off the wall, and the whole wall is just Swiss cheese. There are so many nail holes in the wall from moving art around, but you start counting, and you realize that easily 30 paintings were hanging at this particular spot."

Everyone who knew him says Crichton moved the paintings to keep the works fresh in his mind, so they wouldn't become part of the background. Another unusual aspect of Crichton's collecting style, says Gorvy, was that when he would buy a work from a dealer, "he would ask if he could keep it over dinner. The delivery people were slightly confused by this, but his main motivation was that he wanted to see how to live with the objects, and he felt if he could sit and eat with the objects, he would know if he would enjoy it moving forward."

The collection to be auctioned by Christie's Tuesday and Wednesday has a cohesive, personal feel, one that will never be witnessed again. It includes paintings by Andy Warhol, Frank Stella and David Hockney and is estimated to be worth $75 million.