Accessibility links
Newark Mayor Re-Elected On Strong Crime Record Cory Booker was re-elected Tuesday night to a second term with a 59 percent majority. The victory came in the midst of tumultuous political and economic times in part because of his successful effort to reduce crime. Murders are down by nearly 60 percent since Booker took office, and in March, the city had its first murder-free month since 1966. 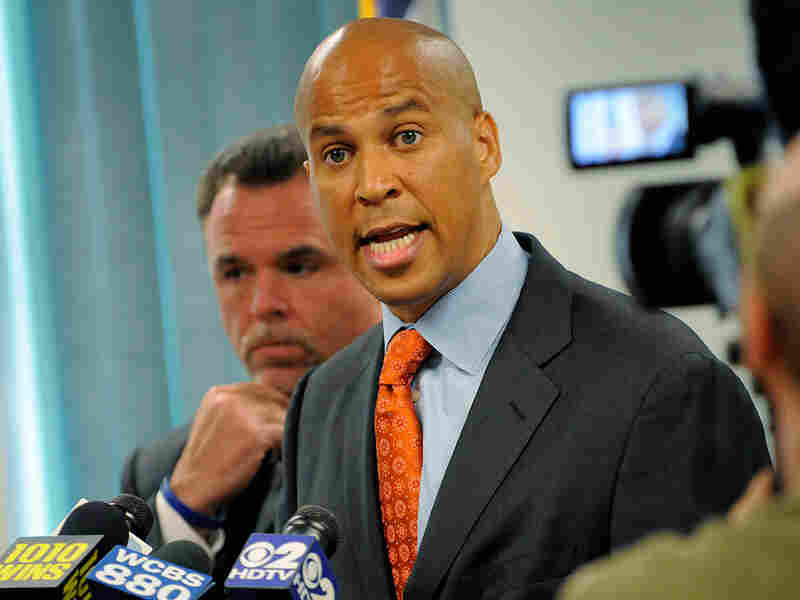 Newark Mayor Cory Booker, shown in 2008, was re-elected Tuesday to a second term. Although Booker's re-election coincides with the opening of the first trial in the 2007 murder of three college students, he is credited with creating successful programs to reduce crime. Jeff Zelevansky/Getty Images hide caption 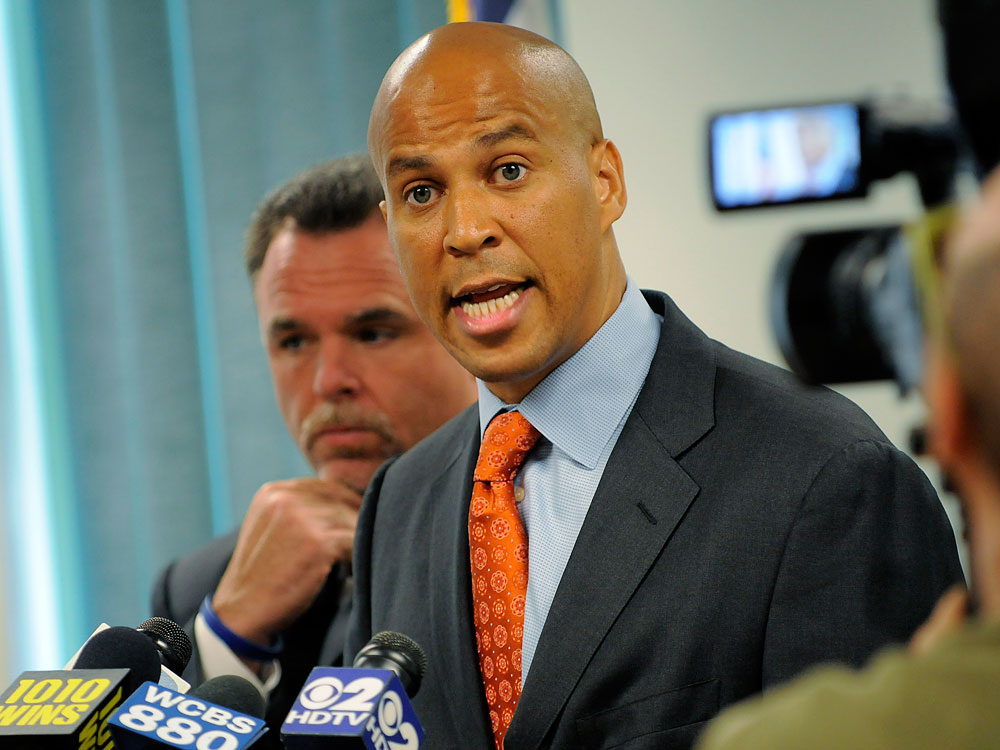 Newark Mayor Cory Booker, shown in 2008, was re-elected Tuesday to a second term. Although Booker's re-election coincides with the opening of the first trial in the 2007 murder of three college students, he is credited with creating successful programs to reduce crime.

Newark Mayor Cory Booker was re-elected Tuesday to a second term with a 59 percent majority.

It wasn't the same clean sweep of four years ago, when his entire slate unseated the 20-year-old power base of Sharpe James, but the victory came in the midst of tumultuous political and economic times.

Booker's re-election coincides with the opening of the first trial in the 2007 murders of three promising college students. The gruesome, execution-style murders were a low point in Booker’s first term that threatened to derail his efforts to transform New Jersey's largest city.

On a hot summer night in August 2007, four friends were hanging out behind a neighborhood school when they were set upon by a group of young men believed to be gang members. One female was hacked with a machete and one was sexually assaulted. Then the teens were forced to kneel against a wall and were shot in the head.

At the first trial for one of six defendants in the case, prosecutor Thomas McTigue described the students as good kids who did nothing to provoke the attack.

In the days that followed, it looked like Booker's plan for revitalizing Newark was about to come unglued. Protesters were circling City Hall calling for his resignation, and the horrifying crime was making national news. Then, the father of one of the victims stood before the TV cameras.

"Hello America. My name is James Harvey. My son Dashon Harvey was killed over the weekend. I don't blame Mayor Booker, it's not on Mayor Booker. It's on you guys; it's on the parents of the city of Newark or whoever you are in the world, when you raise your kids up, you teach 'em right from wrong."

Ron Rice, a city councilman from the ward where the murders took place, called the speech "a chilling national moment."

"I really think it got the community not only talking, but really interacting about how we could stop the senseless murders and the senseless killings," Rice says.

Newark Ahead Of Curve In Crime Fighting

In the days and weeks following the murders, Rice and Mayor Booker announced a dizzying number of programs. Booker persuaded a local foundation to fund $3.2 million worth of surveillance cameras. They improved recreation facilities for youth, boosted services for ex-cons and spent more on policing. Booker held press conferences almost daily.

"We have nothing short but the goal here in Newark, which is to rid our streets of illegal guns and resulting gun violence in the city of Newark," he said at the time.

It paid off. Murders are down by nearly 60 percent since Booker took office, and this March, the city had its first murder-free month since 1966.

Crime rates have been falling in large cities all over the Western world.

"We always used to map crimes by putting little colored pins on the wall, but now we look at crime, really, we try to identify the people surrounding that place and identify how we can get the people who live there to get involved in solving the crime-related problems," he says.

Clear says it's the combination of good policing and community outreach that is working in Newark.

Even a simple painting project is part of this mix. At an elementary school on a recent Saturday, Towanda McEachern and her organization, Supporting our Sisters, are painting murals in the gym.

"We may look at it as just painting the gym, or just painting the school, but the more kids in here, the less kids out there, on the streets. And in addition to that, they get an opportunity to do something for somebody else other than themselves," McEachern says.

It's not that community service is anything new here, but this is the first time in many years that local organizations, city agencies and the police are working together.

Booker is still distrusted by many Newarkers as a carpetbagger from the suburbs who spends too much time outside the city, hobnobbing with the rich and powerful. But those trips have resulted in more money, foundation support and attention.

Now Booker has another four years in office. And as he pledged in the days after the 2007 murders, Newark is no longer defined by the violent crime that has held back its promise.