Accessibility links
Terrorism In The U.S. Takes On A U.K. Pattern The car bombing attempt in Times Square has been a wake-up call for counterterrorism officials. For years, the U.S. seemed largely immune to homegrown terrorism, but experts think the recent attack is more proof that has changed. 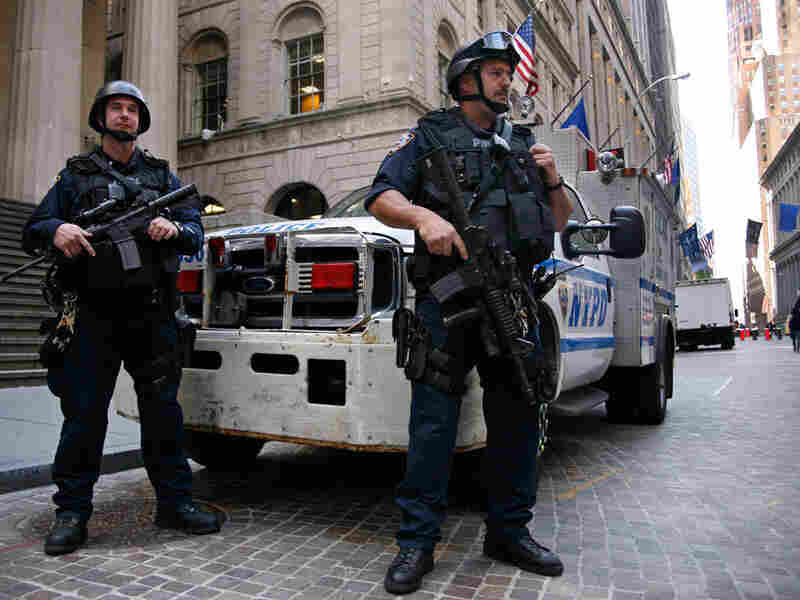 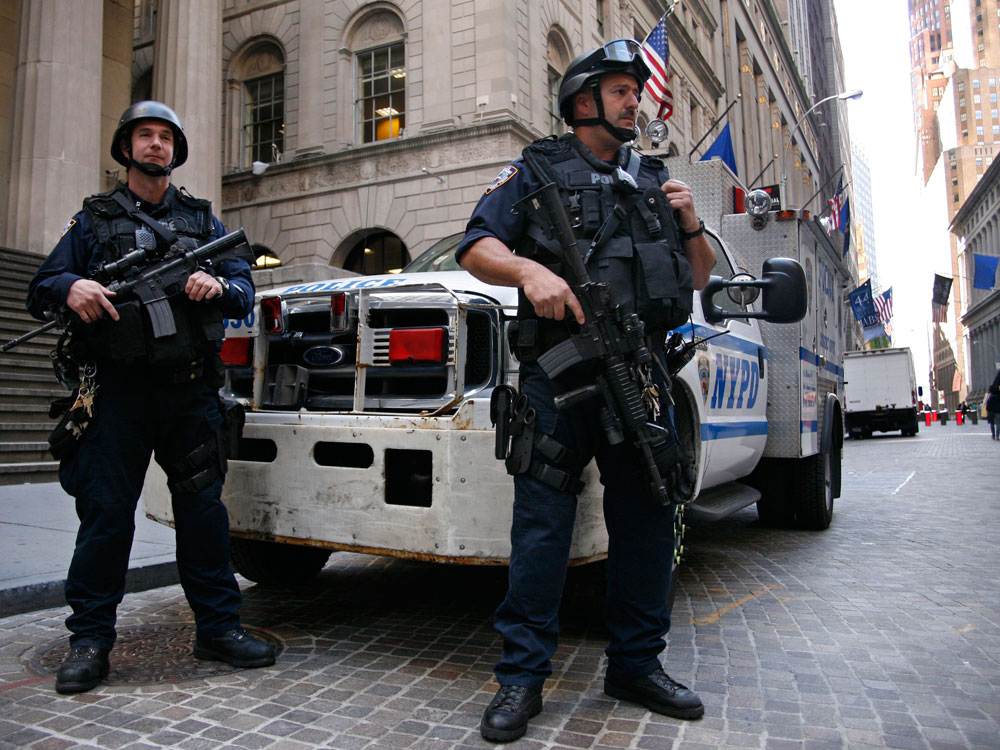 Officers from the New York Police Department's Emergency Service Unit make a routine appearance in the financial district in New York on Friday.

The car bombing attempt in Times Square has been a wake-up call for counterterrorism officials. For years, the U.S. seemed largely immune to homegrown terrorism, but experts think the recent attack is more proof that has changed.

The relative ease with which immigrants could better themselves in America convinced many experts that they were less vulnerable to radicalization. Increasingly, however, the terrorists who are seeking to attack the U.S. -- including the Times Square bombing suspect -- have been living in America for a while.

It's a problem that has haunted the U.K. for years. Now it appears to be an issue for the U.S. as well.

"What we're seeing is kind of a metastasized al-Qaida," says Phil Mudd, a senior researcher at the Center for American Progress. He was, until recently, the FBI's senior intelligence adviser.

"We've seen this in Europe, now we're seeing it here," Mudd says. “Slowly, you're not only getting al-Qaida operatives conducting operations, you're getting people who have absorbed the message -- who see reports, I am sure, of civilians dying in drone strikes in Pakistan; who see the Pakistani army putting incredible pressure, not only on al-Qaida, but on Pakistani villages -- and saying, 'I want to do something about it.' "

Some of those people have spent a long time in America. Najibullah Zazi, the man behind the New York City subway plot, was just a month away from applying for a green card. Faisal Shahzad, the Times Square bombing suspect, held an American passport.

"I think we are moving towards what we call the 'British' model, something that the United States has taken great pride in differentiating itself from over the past seven or eight years," says Karen Greenberg, the executive director of NYU's Center on Law and Security.

She says the British radicalization model typically involved someone from South Asia or Pakistan who went to the U.K. for an education, built a life there, and then for some reason -- personal, political or both -- made their way to terrorist training camps, usually in Pakistan. Then they returned to the U.K. to carry out terrorist acts.

The alleged Times Square bomber seems to have taken that very path. He came to the U.S. 11 years ago, went to college, earned an MBA, worked as a financial analyst and owned a house in Connecticut. About a year ago, he became a naturalized citizen. Then, just a short time after that, according to court papers, Shahzad traveled to Pakistan, where he got explosives training with a militant group. He may have met with leaders in the Pakistani Taliban before returning to the U.S.

Attorney General Eric Holder told NBC's Meet the Press on Sunday that the Pakistani Taliban was behind the Times Square attack.

There is also the possibility the training he got was so rudimentary because militants in Pakistan suspected he was a CIA plant. That might explain why the car bomb he rigged up -- with propane tanks and fireworks and fertilizer -- seemed so crude.

Whether Shahzad decided to attack on his own or not, terrorism expert Bruce Hoffman says the Times Square plot should end any complacency about how homegrown terrorism can't happen in the U.S. The U.K., he says, made the same mistake. They thought it couldn't happen to them either.

"They said, 'British society is very different,' " Hoffman says. "They said, 'This is a problem that only exists on the European continent and won't affect us.' "

"That was their rude awakening," Hoffman says. "Fortunately, there has not been the same tragedy [in the U.S.] that occurred in London five years ago, but if I have ever heard a resounding wake-up call, we're hearing it right now."

Hoffman says Americans should have seen it coming. The first indication came when young Somalis from Minneapolis started traveling to Somalia to train with an al-Qaida-affiliated group almost two years ago. At the time, it was seen as an isolated phenomenon. Now, Hoffman says, it's clear that radicalization has been occurring throughout the United States.

"Not taking this trend more seriously was really like ignoring a Pandora's box," Hoffman says. "Shahzad is just the latest guy to jump out of it."