Accessibility links
Elena Kagan Is Obama's Supreme Court Nominee The ranking Republican on the Senate Judiciary Committee says Elena Kagan, President Obama's new nominee for the Supreme Court, is likely to face questions about her lack of judicial experience, her academic writings and whether she can be "an objective adjudicator of the law and the facts."

Listen
Kagan Likely To Be Pressed On Writings, Experience

Kagan Likely To Be Pressed On Writings, Experience 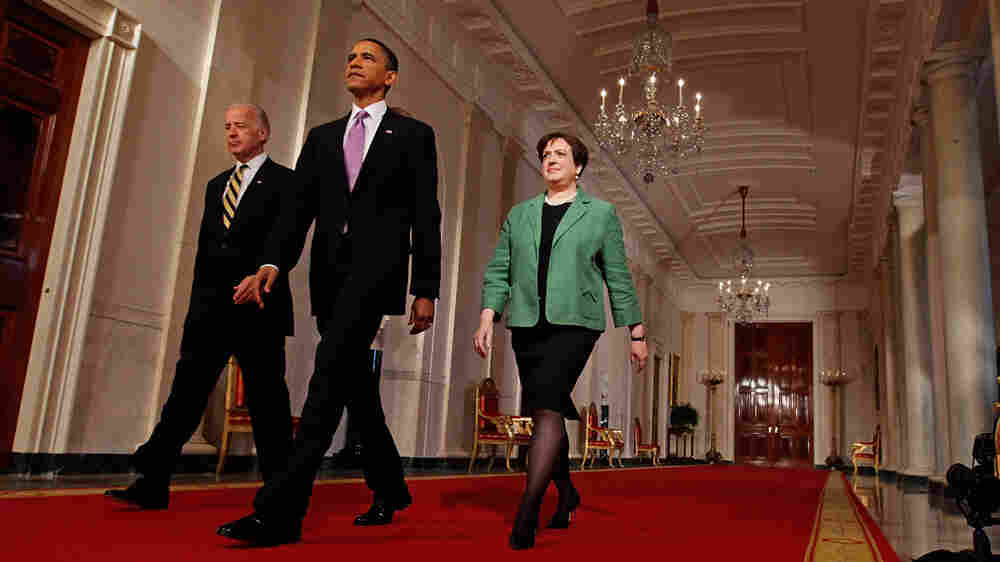 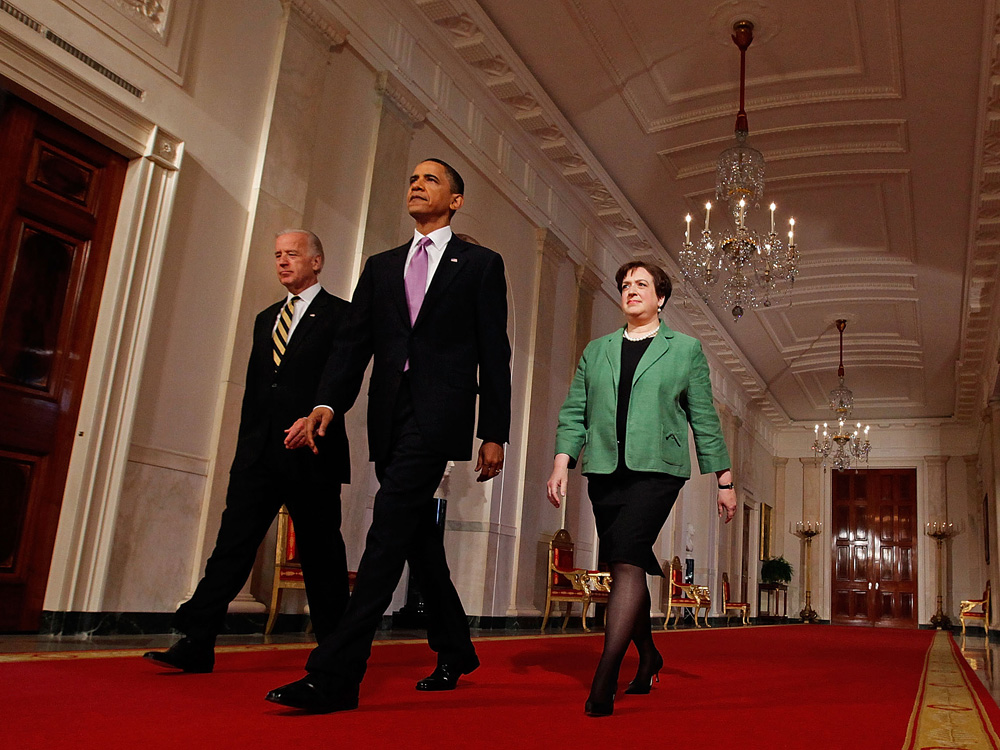 Vice President Biden, President Obama and Solicitor General Elena Kagan walk into the East Room before Obama announced Kagan as his choice to be the nation's 112th Supreme Court justice.

Supreme Court nominee Elena Kagan is likely to face questions about her lack of judicial experience, her academic writings and whether she can be "an objective adjudicator of the law and the facts," a key Senate Republican said Monday.

"I think this process will be interesting. How well she does will be very important -- and how well she allays concerns that she might be the kind of judge that are often quite favored in places like the Harvard faculty that show activism," Sen. Jeff Sessions of Alabama, the ranking Republican on the Senate Judiciary Committee, told NPR's All Things Considered. Kagan, currently the solicitor general, is the former dean of the Harvard Law School.

"Is she going to be the kind of judge who will faithfully follow the law, be satisfied to decide the disputes before her, or will she be the kind of judge that sets policy and move the country in one direction or another? That's not the appropriate role of a judge, in my view," Sessions said.

President Obama nominated Kagan earlier Monday, praising her as a consensus builder who would make an outstanding justice.

Kagan, 50, would be the youngest member of the current court if she is confirmed and the first justice who has not served previously as a judge in almost 40 years. Her presence would result in three female justices on the nine-member court for the first time in its history.

Obama called on Senate Republicans and Democrats to swiftly confirm Kagan, who he said had demonstrated "her openness to a wide array of viewpoints."

"Elena Kagan is widely regarded as one of the nation's foremost legal minds," the president said, flanked by Kagan and Vice President Biden in the East Room of the White House.

Kagan said she was "honored and humbled by this nomination" to replace retiring Justice John Paul Stevens, calling it the honor of a lifetime.

As solicitor general, she said she had been "blessed to represent the United States before the Supreme Court," which she described as an extraordinary institution that had the potential to change Americans' lives for the better.

Obama informed Kagan of his decision Sunday night and then phoned the three federal judges he did not choose for the position: Diane Wood, Merrick Garland and Sidney Thomas. The president began calling Senate leaders with the news early Monday as his White House team prepared to launch a broad campaign-style outreach designed to shape the national image of Kagan, an unknown figure to much of America.

Kagan's fate will be up to a Senate dominated by Democrats, who with 59 votes have more than enough to confirm her, though they are one shy of being able to halt any Republican stalling effort. Barring any surprises, Kagan is likely to emerge as a justice.

The chairman of the Senate Judiciary Committee, Patrick Leahy (D-VT), said Kagan should be confirmed before Labor Day. "Our constituents deserve a civil and thoughtful debate on this nomination, followed by an up-or-down vote," he said.

Sen. Chuck Schumer (D-NY) said Kagan would help "bridge the 5-4 splits that have become so routine on the court."

But Republicans cautioned against a rush to confirm. "Judges must not be a rubber stamp for any administration," said Sen. Mitch McConnell of Kentucky.

Sen. John Cornyn (R-TX) echoed McConnell, saying it is the Senate's duty to "give Ms. Kagan's record a full and fair review."

A Lack Of Judicial Experience

Kagan would be the first justice without judicial experience since William H. Rehnquist and Lewis F. Powell Jr. joined the court in 1972. The White House is expected to frame Kagan's lack of service as a judge in upbeat terms, underscoring that there are many qualified routes to the top of the judiciary.

As solicitor general, Kagan is the Obama administration's top Supreme Court lawyer -- the first woman to fill that position. Prior to that, she was the first woman to serve as dean of Harvard Law School, where she subsequently won widespread praise for ending long-standing faculty wars.

At a time when many people thought the law school's faculty had become too liberal, Kagan "sought to recruit prominent conservative scholars and spur a healthy debate on campus," Obama said.

Martha L. Minow, who succeeded Kagan at Harvard, described her as "a brilliant teacher, important scholar and astonishingly effective dean."

"Her decency, her skill at making almost anything better, her intellectual and interpersonal talents, and her integrity make this an outstanding nomination," Minow told NPR in an e-mail.

Kagan served in a number of top positions in President Clinton's White House until 1999, when Clinton nominated her to the federal appeals court in Washington. However, the Republican-controlled Senate never took up her nomination.

On Monday. Sen. James Inhofe (R-OK) became the first senator to publicly say he'll oppose Kagan's nomination, citing her "lack of judicial experience and her interpretation of the Constitution."

Although Republicans did not immediately signal that they would try to prevent a vote on Kagan, they are certain to grill her in confirmation hearings over her experience, her thin record of legal writings and her objections to the military's policy about gays.

As Harvard Law School dean, Kagan openly railed against the military's "don't ask, don't tell" policy regarding gay service members. She called it discriminatory and barred military recruiters over the matter until the move threatened to cost the university federal money.

Kagan later joined a challenge to a law allowing colleges to be stripped of federal money if they kept out the military recruiters. But the Supreme Court upheld that law unanimously.

When she was confirmed as solicitor general in 2009, only seven Republicans backed her.

She now faces the high task of following John Paul Stevens, who leaves a legacy that includes the preservation of abortion rights, protection of consumer rights, and limits on the death penalty and executive power. He used his seniority and his smarts to form majority votes.

If confirmed, Kagan also would become the third Jewish justice on the current court, which has six Catholics. With Stevens' exit, there would be no Protestants.

Obama's decision last year centered much on the compelling narrative of Sotomayor, who grew up in a housing project and overcame hardship to become the first Hispanic Supreme Court justice.

In 1988, she became a Supreme Court clerk for Justice Thurgood Marshall. Before that, she clerked for federal appeals court Judge Abner Mikva, who later became an important political mentor to Obama in Chicago.

Kagan said at the White House event that Mikva represents "the best in public service." And she praised Marshall, one of her legal heroes, as having done "more to promote justice over the course of his legal career than did any lawyer in his lifetime." The president joked Monday that the late justice reciprocated by calling her "Shorty."

In her current job, Kagan represents the U.S. government and defends acts of Congress before the Supreme Court and decides when to appeal lower court rulings.

The president noted that Kagan's first case as solicitor general was to argue for maintaining a cap on corporate donations to political campaigns in Citizens United v. Federal Election Commission. Although she lost that case, Obama said, the fact that she was willing to take it on "says a great deal about Elena Kagan."

NPR's Nina Totenberg and Scott Neuman contributed to this report, which contains material from The Associated Press