Accessibility links
BP Considers Options As Oil Keeps Pouring Into Gulf The oil giant is looking at new ways to try to stem the flow of an estimated 210,000 gallons of crude oil a day from the site of a deep-water-well fire. One option is to try to plug the leak with rubber and other debris -- a strategy known as a "junk shot." 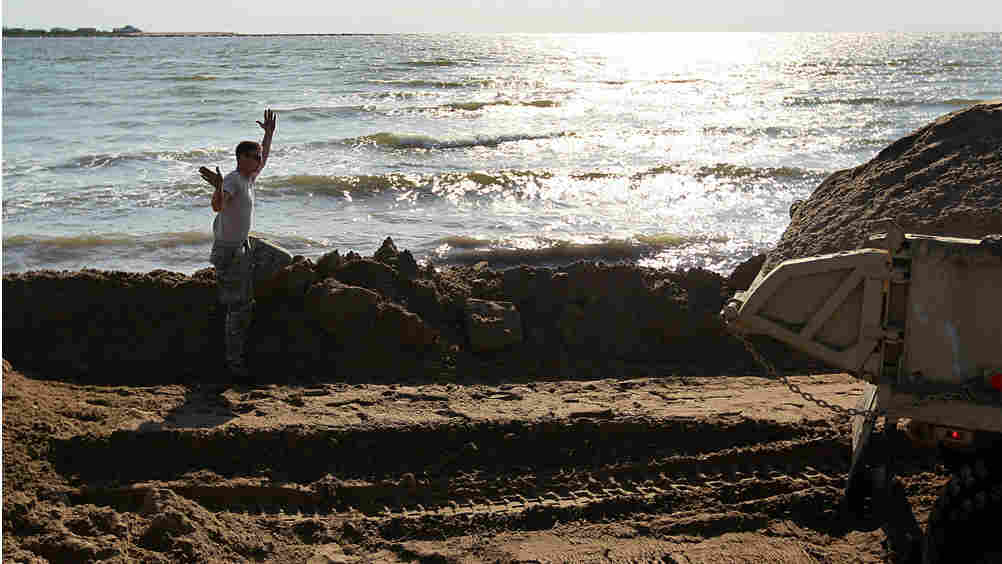 Louisiana National Guard members work Monday on creating an earthen barrier to protect an estuary in Lafourche Parish, La., from a massive oil spill. Efforts to contain the spill, including a 98-ton containment box to cap the leak, have done little to slow its flow. Joe Raedle/Getty Images hide caption

Weeks or months could pass before the flow of oil spewing into the Gulf of Mexico from a destroyed deep-sea well can be stanched, the head of oil giant BP told NPR on Monday.

In an interview for All Things Considered, BP Chief Executive Officer Tony Hayward said "it's certainly possible" that considerable time could pass before the flow can be stopped. Currently, an estimated 210,000 gallons of oil a day is gushing into the Gulf of Mexico from the well site off the Louisiana coast.

BP was looking for new ways Monday to stop the leak, after a containment structure placed over the leak clogged during the weekend.

Next, the company is considering using a smaller containment box, called a "top hat," or injecting shredded rubber and other debris to stop the well, a procedure known as a "junk shot."

On NBC's Today show, BP Chief Operating Officer Doug Suttles said none of the techniques has been tried on a well this deep, nearly a mile below the water's surface.

"I can't tell you if any one of them will work," Suttles said. "But as long as we have options, we'll keep trying. The goal here has to be to get the flow stopped."

The company's best hope for stemming the flow is a relief well. Drilling has begun but could take up to three months to finish.

An estimated 3.5 million gallons of oil has escaped from the well since the April 20 explosion on the Deepwater Horizon drilling rig. The resulting oil slick now threatens wildlife, fisheries and commerce all along the Gulf Coast.

On Monday, the companies involved in the oil rig explosion blamed one another for the disaster.

A top American executive for BP, Lamar McKay, said a critical safety device known as a blowout-preventer failed catastrophically, and blamed rig owner Transocean for the problem. Separately, Transocean said BP was responsible for all work conducted at the site. A third company, Halliburton Inc., defended work that it performed on the deepwater oil well as "accepted industry practice" before last month's explosion.

BP's and Transocean's comments came in testimony prepared for a Senate hearing Tuesday.

Menwwhile, the first patches of oil have reached barrier islands in Louisiana and Alabama. BP is working with state and local governments to protect fragile marshes and coastline. They’ve place more than 1 million feet of booms to either deflect or absorb oil.

In Louisiana on Monday, helicopters were dropping sandbags the size of elephants to keep the crude out of marshes. Oceangoing ships must be cleaned to make sure they are free of oil before entering the port of New Orleans and the port of Mobile.

At sea, skimming boats are collecting oily water from the Gulf’s surface. And the company is using chemical dispersants to break up the crude. BP says today it has begun using those chemicals at the site of the leak underwater, as a way to keep oil from reaching the water's surface.

The Environmental Protection Agency approved BP's spraying of the chemicals underwater for a 24-hour period.

"The effects of underwater dispersant use on the environment are still widely unknown, which is why we are testing to determine its effectiveness first and foremost," the EPA said in a statement. "If it is determined that the use of this dispersant underwater is effective and that BP may continue its use, the Federal government will require regular analysis of its impact on the environment, water and air quality, and human health."

The dispersants had never been tried at such depths before.

BP has spent $350 million to fight the spill so far, and its legal costs are mounting. A BP shareholder has filed a lawsuit against the company's top executives, accusing them of ignoring crucial safety issues on deep-water drilling rigs. Myriad other lawsuits have been filed by fishermen, tourism businesses and victims of the rig explosion.

The U.S. Coast Guard and the Minerals Management Service will hold a public hearing in Louisiana Tuesday and Wednesday as part of a federal investigation into what caused the drilling rig to explode and sink.

NPR's Debbie Elliott and The Associated Press contributed to this report