Accessibility links
Iraq's Interior Ministry: Still Feared, Still Corrupt Iraq's Interior Ministry has become as feared today as it was under Saddam Hussein. Before the U.S. invasion, the ministry served as the pervasive, terrifying intelligence arm of Saddam's Baath Party, which kept a file on every Iraqi. Now Iraq's political parties are fighting to control the ministry. 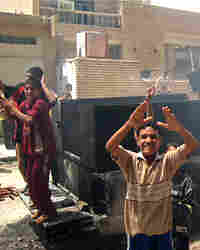 Iraq's Interior Ministry is as feared today as it was under Saddam Hussein despite being so fractured along sectarian lines.

Before the U.S. invasion of Iraq, the ministry served as the pervasive, terrifying intelligence arm of Hussein's Baath Party, which kept a file on every Iraqi.

Located outside of Baghdad's heavily fortified Green Zone, security around the Interior Ministry complex is stringent. Cars aren't allowed to stop near the entrance, and loiters are shooed away by twitchy police fearing suicide bombers.

Inside the outer gate, men in faded shirts walk single file — after getting pat down — carrying their belongings in see-through plastic bags. They're policemen, but they only change into their uniforms once they enter the ministry.

Once inside the ministry there are more security checks: mobile phones are confiscated to prevent anyone giving information on the movements of employees. And guns are everywhere. Adhering to standard procedure, a western official escorting reporters pulls out his handgun before he enters the building.

Iraqi police at the front desk stiffen at the sight of strangers. No one gets anywhere in the squalid 11-storey building without a permit.

A senior Shiite police officer, who calls himself Ali Kamil, said the ministry is split into hostile armed camps.

"The whole ministry is plagued — each floor represents a state of its own, a party or a certain group," he said. "The Shiite parties want to get rid of the Sunni ones. The Sunnis want to get rid of the Shiite ones. The Kurdish parties want the Sunnis and the Shiites to fight each other. They are all wrestling and sometimes they even liquidate their rivals."

It's practically impossible to walk the dusty hallways of the building without the shadow of former Interior Minister Bayan Jabr looming. He was leader of a Shiite paramilitary group, and he brought thousands of militiamen into the ranks of the police force.

People here say Jabr ran the ministry in a climate of fear, mistrust and corruption. Jabr was removed from the Interior Ministry in May 2006, and given the government's finance portfolio.

His successor at the Interior Ministry is Jawad Bolani, who said he has fired 16,000 employees of the ministry in the past year on charges of corruption and other crimes.

"It's a work in progress; we have thousands of cases we're investigating. We have a long way ahead of us to create a ministry that is balanced and structured fairly," Bolani said.

Bolani is a Shiite who served in Iraq's air force for 15 years. This is his first senior government position. He is reputed to be independent of any of the major political parties, but observers fear the Interior Ministry's divisions run too deep to be bridged anytime soon. It's a microcosm of Iraq and its conflicts.

Kamil said: "There are different groups and each one of them is holding a string. So what is happening now is no on can make decisions because everyone pulls his string in different directions. They are not united."

"There are negative things about government institutions like the Interior Ministry, but we shouldn't forget sacrifices made by the police and the suffering of their families," he said. "More than 15,000 policemen, including both Sunnis and Shiites have been killed in the violence here."

Inside the ministry, clusters of policemen in different uniforms watch warily as people go up and down the crumbling stairs. Despite the new minister's efforts at reform, Iraq's main political factions continue to battle for supremacy inside the ministry.

People like Kamil fear when U.S. forces will leave Iraq, every man with a gun here will stand and fight, but for his political party not for his country.