Accessibility links
'Don't Blame Me' Is Refrain At Gulf Oil Spill Hearing Executives of the three companies involved in one of the worst spills in U.S. history spent little time before trying to shift responsibility for the crisis, which has spewed millions gallons of crude and spurred the U.S. government to tighten oversight of the offshore oil and gas industry.

'Don't Blame Me' Is Refrain At Gulf Oil Spill Hearing

'Don't Blame Me' Is Refrain At Gulf Oil Spill Hearing 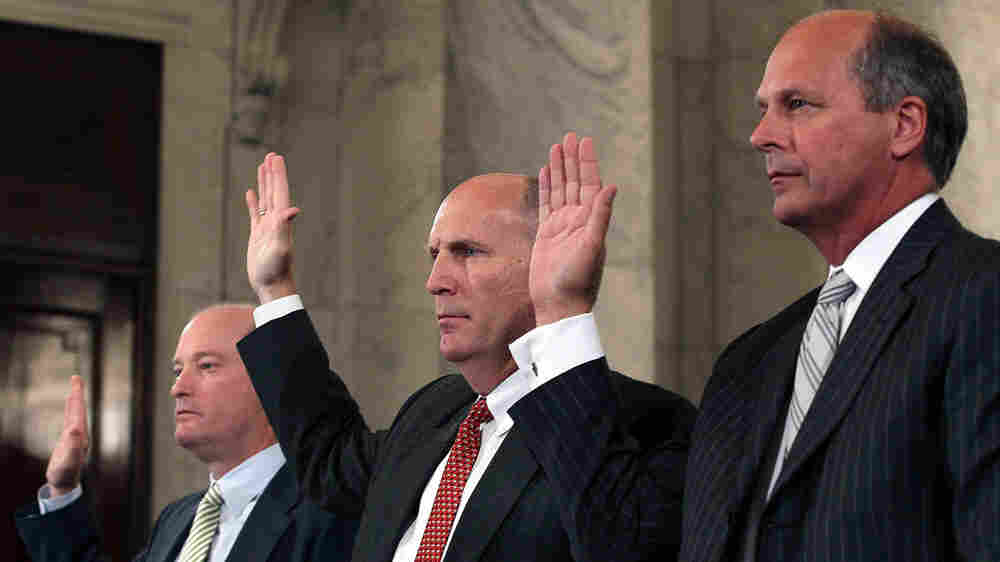 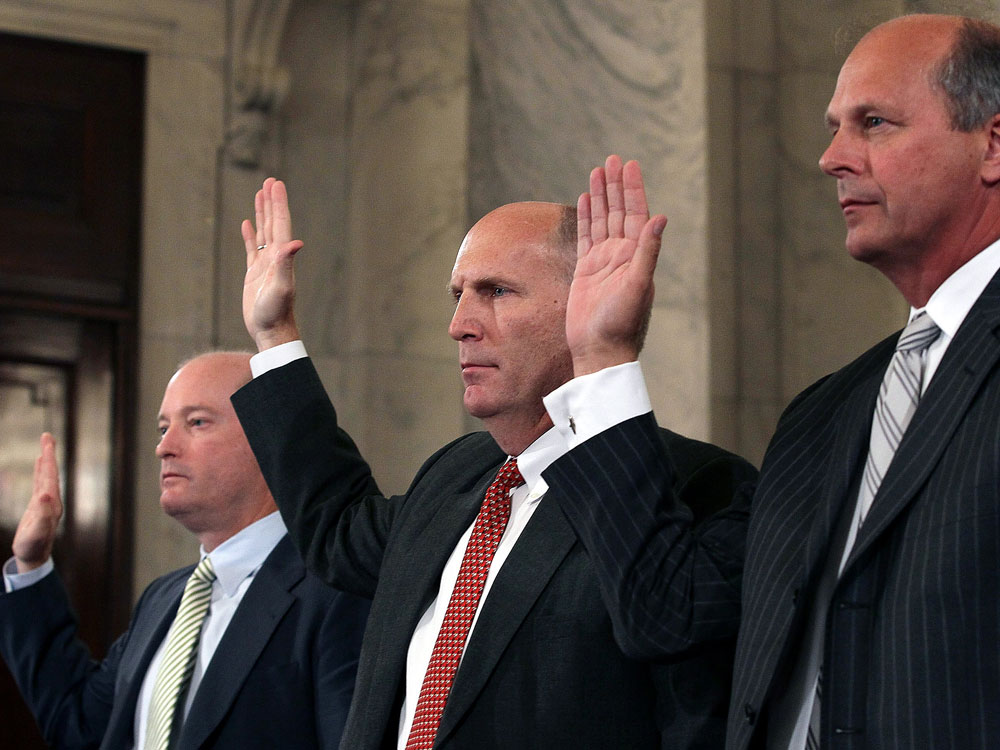 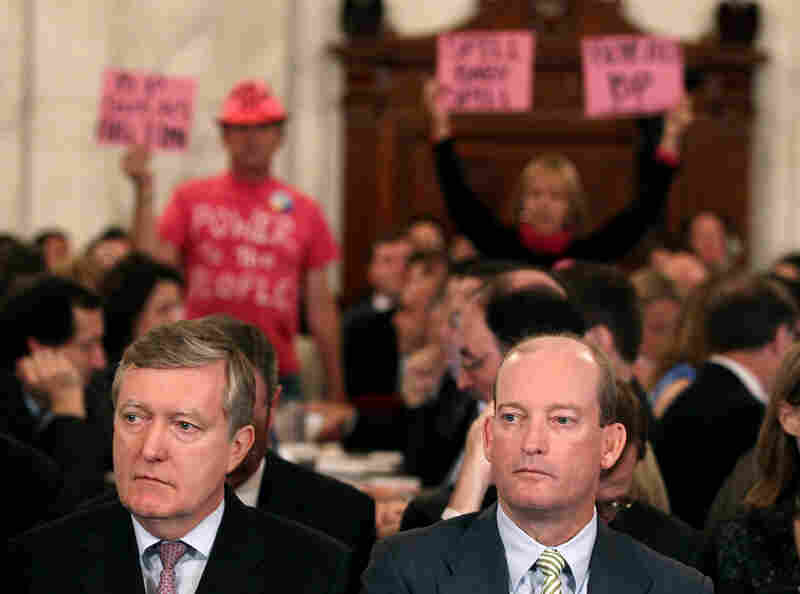 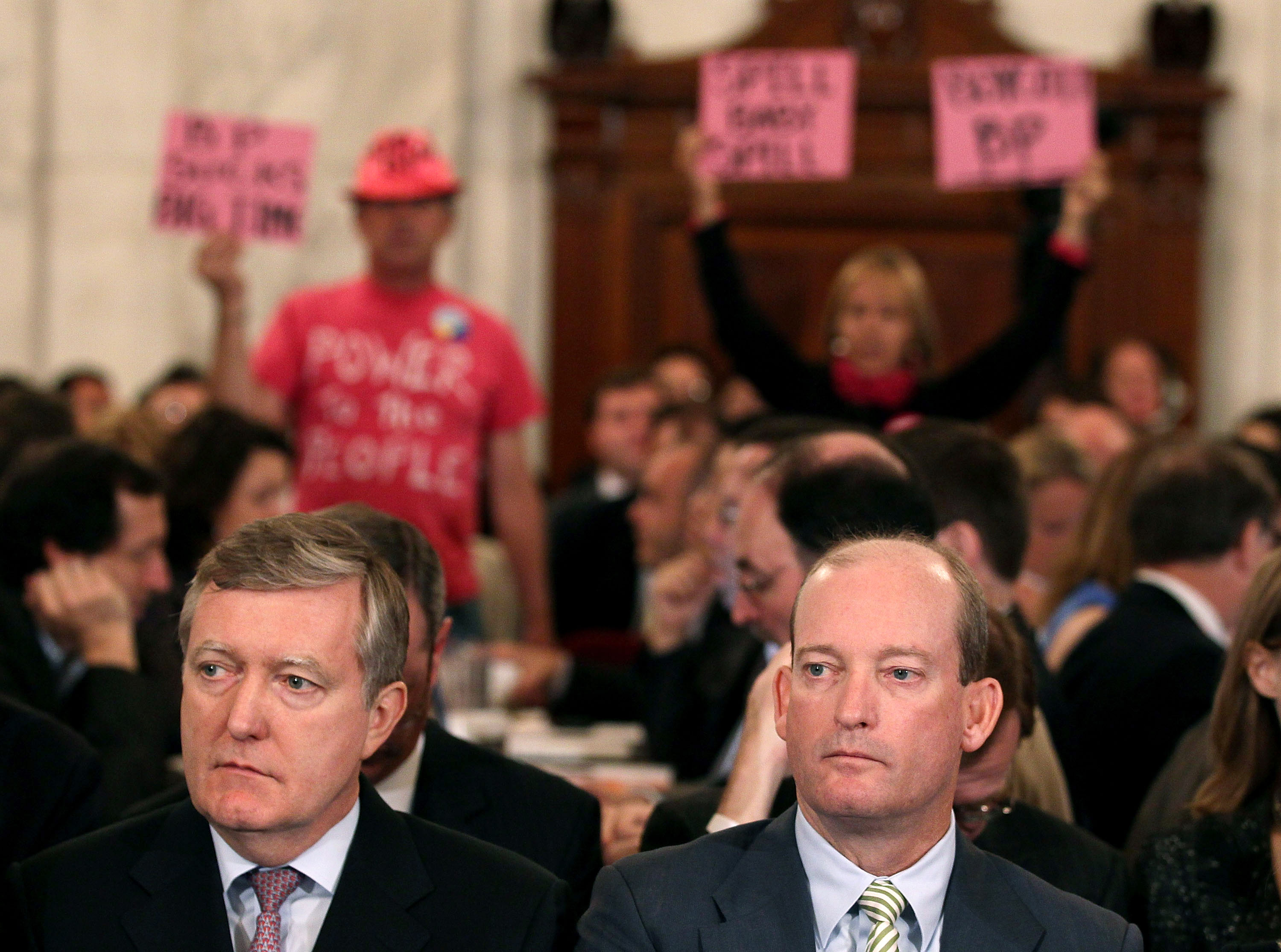 The company that owned the oil rig that exploded and sank in the Gulf of Mexico dismissed the possibility Tuesday that its failed safety mechanism caused the disaster, which has spewed millions of gallons of crude and spurred the federal government to tighten oversight of the offshore oil and gas industry.

Interior Secretary Ken Salazar urged Congress on Tuesday to approve splitting up the agency that monitors offshore drilling as a result of the leak and asked for millions of dollars to boost oversight.

Executives of the three companies involved in one of the worst spills in U.S. history acknowledged in testimony before a Senate panel that investigators have yet to pinpoint exactly what caused the disaster, but they spent little time before trying to shift responsibility for the crisis to each other.

Transocean CEO Steven Newman said the April 20 explosion of its Deepwater Horizon rig was unusual because it happened after construction of the well was essentially complete. He also said BP, which leased the rig, bore responsibility.

BP To Rely On 'Junk' To Stop Spewing Oil

BP To Rely On 'Junk' To Stop Spewing Oil

"Offshore oil and gas production projects begin and end with the operator, in this case BP,'' Newman told the Senate Energy and Natural Resources Committee.

But BP America Chairman Lamar McKay pointed the finger at Transocean, which owned the failed 450-ton blowout preventer that was supposed to shut off oil flow on the ocean floor.

"That was to be the fail-safe in case of an accident," McKay said.

Newman countered that there is "no reason to believe" the blowout preventer didn't work and that it might have been clogged by debris shooting up the well. Instead, he put the focus on subcontractor Halliburton, which was encasing the well pipe in cement before plugging it just hours before the deadly blast that killed 11 workers.

Halliburton executive Tim Probert, in turn, said his company completed its operations 20 hours before the rig went up in flames. He said the company's work was finished "in accordance with the requirements" set out by BP and with accepted industry practices.

The Senate panel's chairman, Jeff Bingaman (D-NM), opened the hearing by saying the oil rig explosion was likely due to a "cascade of errors, technical, human and regulatory."

Bingaman called the spill a catastrophic failure of technological systems and likened it to the sinking of the Titanic, the Three Mile Island nuclear disaster and the explosion of the space shuttle Challenger.

Sen. Lisa Murkowski of Alaska, the panel's ranking Republican, said the future of domestic oil development in this country rests with finding out what went wrong, correcting the failures and shortcomings and assuring the public offshore drilling can be conducted safely. 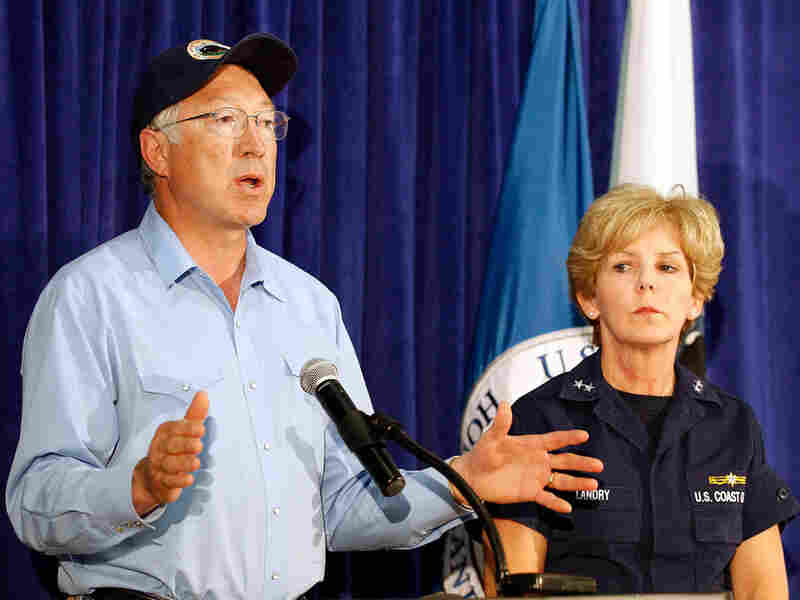 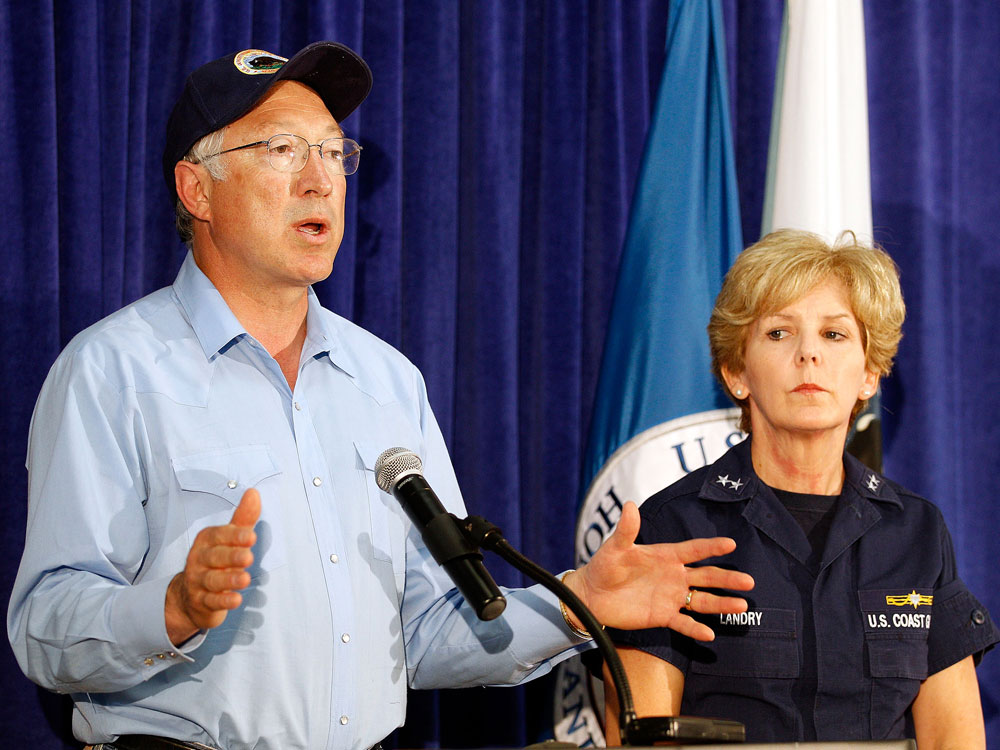 Interior Secretary Ken Salazar speaks during a news conference in Robert, La., about the response to the Gulf oil spill. At right is Coast Guard Rear Adm. Mary Landry.

The massive Gulf Coast spill has prompted the Obama administration to rethink the agency charged with oversight of offshore drilling.

Salazar wants to divide the embattled Minerals Management Service into two agencies: one charged with inspecting oil rigs, investigating oil companies and enforcing safety regulations, and another to oversee leases for drilling and collection of billions of dollars in royalties. He also asked Congress for $29 million to boost inspection and enforcement activities.

"I believe the job of ensuring that energy companies follow the law and protect the safety of their workers and the environment should be independent from MMS's leasing, revenue collection and permitting functions," Salazar said.

The American Petroleum Institute responded to the plan by saying that the oil industry, which it represents, has a priority "to provide safe, technologically sound and environmentally responsible offshore operators and remain[s] committed to working with Secretary Salazar to achieve this goal."

The Minerals Management Service, an arm of the Interior Department, is currently responsible for collecting more than $10 billion a year in royalties from oil and gas drilling as well as enforcing laws and regulations that apply to drilling operations. Some critics say the two roles present a conflict.

The agency has been severely criticized in recent years over allegations that it has become too cozy with the oil industry. In 2008, an inspector general report found that workers at the MMS royalty collection office in Denver partied, had sex and used drugs with energy company representatives. Workers also accepted gifts, ski trips and golf outings, the report by Inspector General Earl E. Devaney said.

Devaney decried "a culture of ethical failure" and an agency rife with conflicts of interest.

As the hearings were under way, BP engineers were moving forward on a "Plan B" to stop the spewing oil as representatives from the British oil giant and two other companies prepared to testify before the Senate Energy and Natural Resources Committee.

An estimated 210,000 gallons of crude oil have spilled into the Gulf of Mexico each day since the Deepwater rig exploded April 20.

Last week, BP lowered a 100-ton concrete dome known as a "cofferdam" to try to cap the rupture and direct oil to the surface in a controlled manner. The attempt failed when methane released with the oil caused ice to form inside the dome, creating a jam.

The company lowered a second, smaller oil containment box into the sea near the blown-out well. But it won't be placed over the spewing well right away. BP spokesman Bill Salvin said engineers want to make sure everything is configured correctly and avoid the same buildup of ice crystals that stymied their first attempt.

Engineers hope the gas will come in less contact with seawater. BP also planned to inject methanol into the new system to help prevent buildup of methane ice, and it said crews might be able to start siphoning the leaking oil up to a tanker by the middle of the week.

At best, however, it's only a partial solution. Over the next two weeks, BP said it will pump golf balls, rope knots and shreds of tires into a partially closed valve on the sea floor, to see if it they can jam it up and stop the flow of oil that way.

Winds have continued to push the massive oil slick toward the coasts of Louisiana, Mississippi and Florida.

Louisiana Gov. Bobby Jindal said he expected the crisis to have a long-term impact on his state.

The extent of the oil spill's impact on coastal fisheries was also not known, but most experts said it would be extensive. The National Oceanographic and Atmospheric Administration on Tuesday expanded the area of federal waters closed to fishing west to central Timbalier Bay, southeast of Houma, La.

NOAA said the expanded area means about 7 percent of federal waters in the Gulf will be off limits. The area extends east to Choctawhatchee Bay, Fla.

Louisiana has closed state waters east of the Mississippi and a portion west of the river.

So far, the U.S. Fish and Wildlife Service has rescued only two birds affected by the spill, a pelican and a Northern Gannet. Both were treated at the bird rehabilitation facility at Fort Jackson, La.

Boats and helicopters continued to scour the Gulf for more oiled-soaked birds, but it could take weeks -- even months -- before the impact on the area's birds is truly known, said Greg Butcher, director of bird conservation for the National Audubon Society.

"It's impossible to project right now," Butcher said. "It could be a few; it could be a very large number."

NPR's Jeff Brady, Debbie Elliott and Scott Neuman contributed to this report, which contains material from The Associated Press