Accessibility links
Fresh Air Interview: Journalist Spencer Ackerman, Covering Omar Khadr's Trial At Guantanamo Bay Omar Khadr has been held at Guantanamo Bay for eight years. He is accused of killing an American solider in Afghanistan at age 15. A pretrial hearing for Khadr started last month, and journalist Spencer Ackerman says it's likely to indicate whether President Obama's changes to the military commissions are substantive or simply cosmetic. 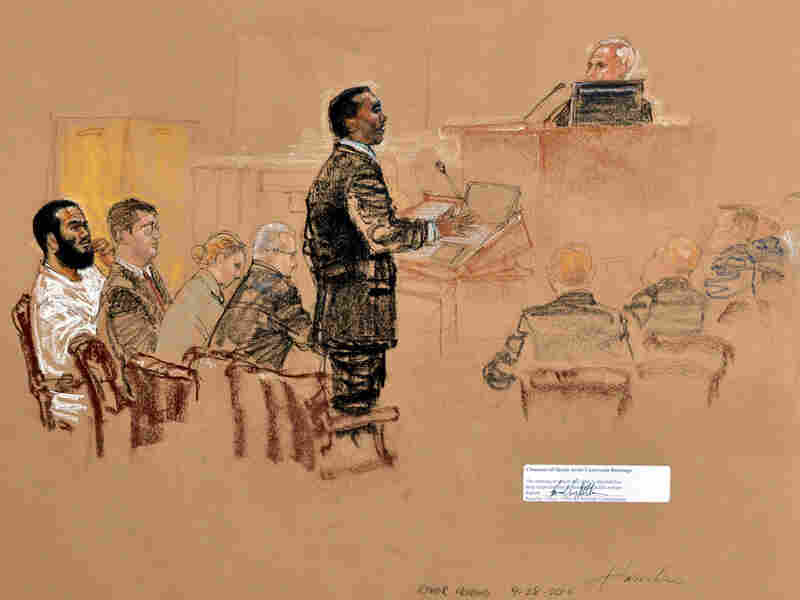 A sketch by courtroom artist Janet Hamlin shows Omar Khadr (left) at a hearing with his defense team in the courthouse for the U.S. military war crimes commission at Guantanamo Bay. Janet Hamlin/Pool/AP hide caption 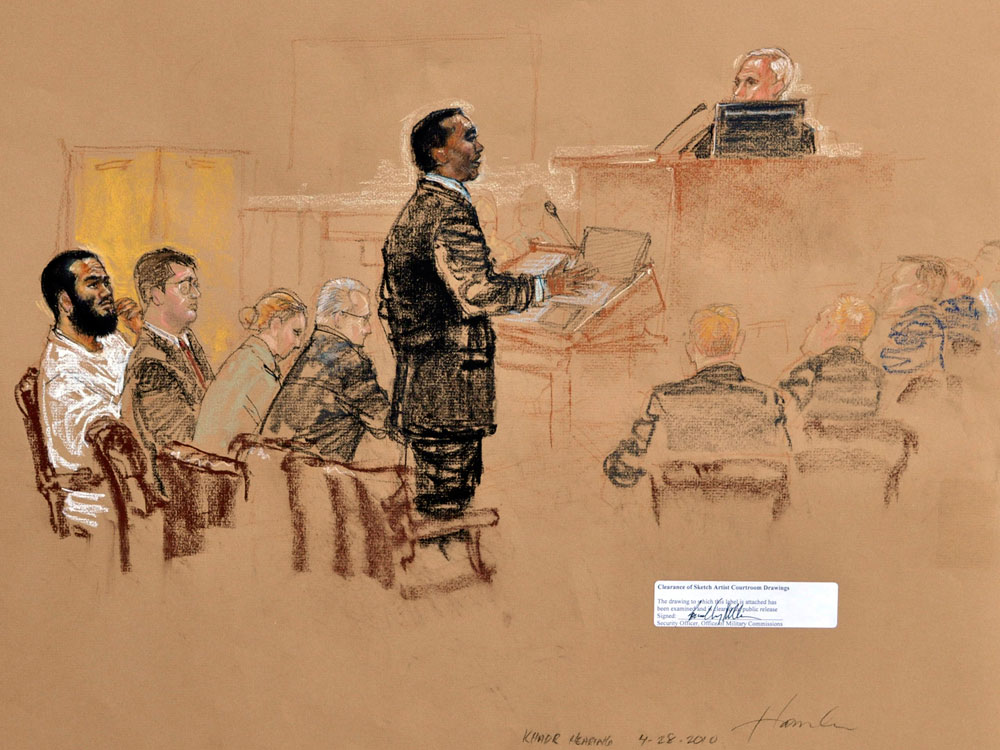 A sketch by courtroom artist Janet Hamlin shows Omar Khadr (left) at a hearing with his defense team in the courthouse for the U.S. military war crimes commission at Guantanamo Bay.

Stories By Spencer Ackerman From 'The Washington Independent'

A Photographic Tour Of Guantanamo Bay
Military Commission Hearing Adjourns With Mixed Results
Interrogator No. 1 To Testify For Khadr’s Defense Tomorrow
Khadr Was Told A Fictitious Story About A Young Afghan Being Raped And Killed

Spencer Ackerman is the national security correspondent for The Washington Independent.

Since late April, Ackerman has been covering the pretrial hearing of the youngest alleged enemy combatant held in Guantanamo Bay, 23-year-old Omar Khadr. Khadr, who has been held in Guantanamo for nearly eight years, is accused of killing a U.S. solider with a hand grenade in 2002, when he was 15.

The pretrial hearings will establish whether statements Khadr made to his interrogators as a teenager can be considered admissible before a military commission.

"There's a crucial issue underneath this hearing, which is about suppressing evidence obtained coercively," says Ackerman. "Omar Khadr's lawyers contend that from the very beginning -- first at Bagram [Air Field] in 2002 and then at Guantanamo -- [Khadr] was subjected to harsh enough treatment that it rendered everything he told his interrogators to ultimately be inadmissible before the commission. So the government can't use it ... [because] it was produced under some degree of coercion or even abuse."

The hearing is currently on an extended break while Khadr receives a mental health evaluation. Ackerman says that Khadr's trial before a military tribunal, expected to start in July, is likely to indicate whether President Obama's pledge to reform the military commissions is substantive or simply cosmetic. 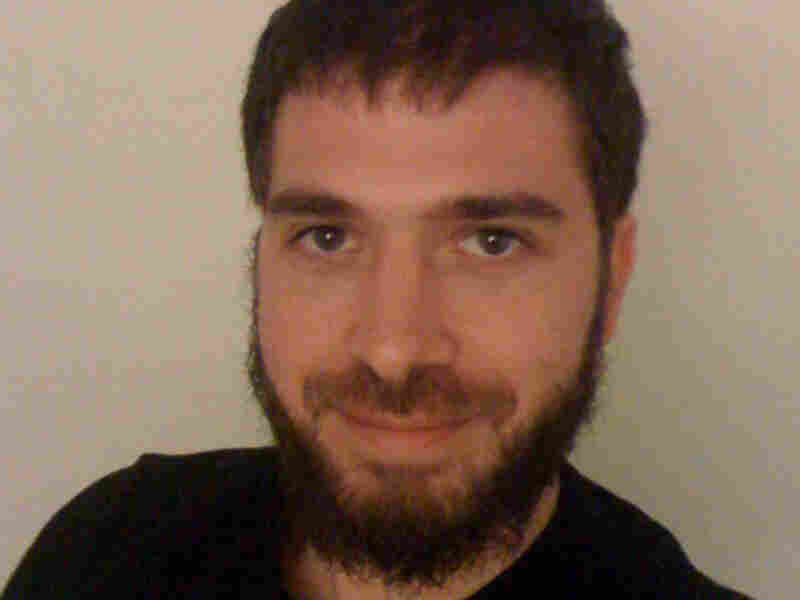 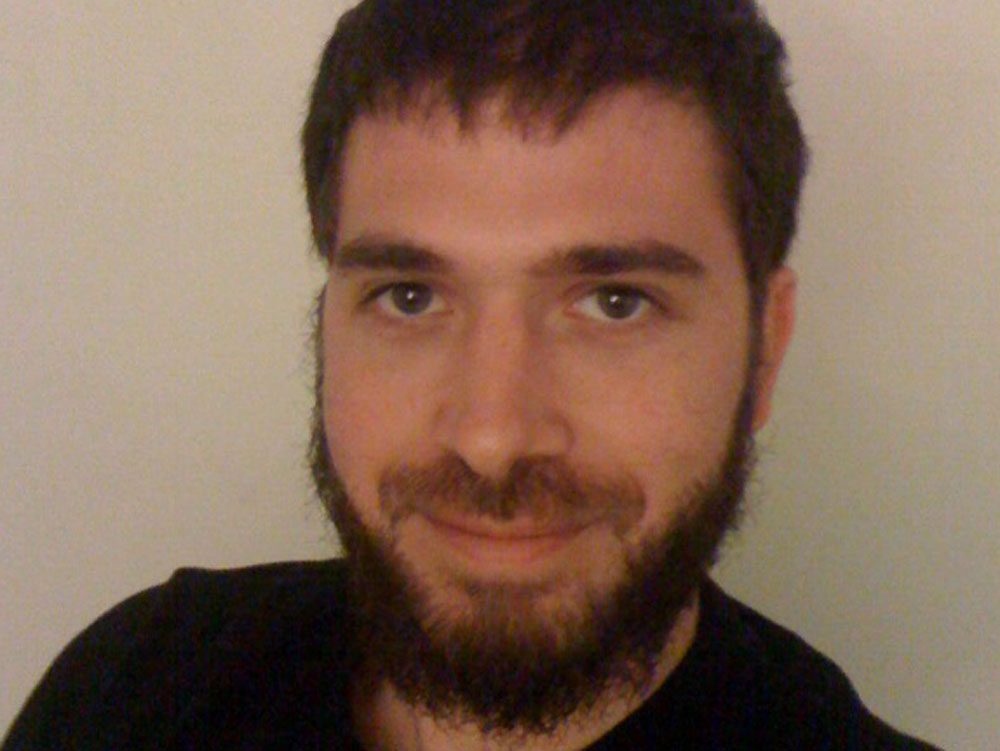 "Khadr's attorney's are trying to get all of his statements made to interrogators over his eight years in detention stricken from the government's case," he says. "And if that happens, while the military commissions don't exactly rely on the same kinds of precedential respect that civilian courts do, it would open the door for every other detainee who's going to be tried under the commissions to file a motion to suppress similar evidence that the government is using collected from interrogations of these detainees.

"So if Khadr ultimately wins this hearing [on the admissibility of evidence] the government is going to have a much harder time presenting a case for conviction in Khadr's murder trial before the commissions, but also, potentially, it could find itself subjected to a floodgate opening of motions from detainees [for] getting their own statements suppressed and thereby potentially jeopardizing the viability of the military commissions as a forum for prosecuting terrorism detainees in general."

On why four reporters were banned from Guantanamo Bay

"One of the witnesses in this case -- an interrogator, who was the first to interview Omar Khadr in 2002 -- was testifying under a shield of anonymity. We were supposed to call him Interrogator No. 1. But throughout the trial and even before the trial started, a number of facts were introduced into the public record that several of us decided to use to identify him -- as it didn't seem like the easiest or most intuitive decision to protect his anonymity. So several of us reported his name and even though more of us did, those four reporters were banned. It was a decision that let the air out of the room for a lot of us."

"They're worried that because they don't have the same sort of subpoena power that the criminal justice system affords to defense lawyers that they'll have trouble convincing other interrogators who talked with Omar Khadr ... to testify in a case that revolves very heavily around the conditions of his treatment while in detention, if anonymity from the bench is not respected."

On why the reporters decided to release the name of Interrogator No. 1

"His name and lots of identifying information about him -- including that he was court-martialed, the circumstances for which he was court-martialed -- had been public record already. And it seemed like a very questionable system to reclassify this, particularly in a hearing that the Defense Department was trying to ensure was as public and transparent as possible. There are some reasons why people's names have legitimately been classified -- among them, the prospect of redeployment and retaliation that might occur if a certain interrogator was associated with detainee abuse. But because this individual was court-martialed, that's not a circumstance he'll face. So a number of us made the judgment call that because it was so clear that this person's identity was already public, that the issues of transparency merited printing his name."

"We're obligated to cover essentially what the Defense Department allows us to cover. There's an extensive series of rules that we have to adhere to that can be unilaterally revoked. There's an appeals process -- it's cumbersome and we'll see how effective it ultimately is. The largest is among: where we can go during the hearing, what we can bring in, the ability for the Defense Department to revoke certain aspects of the proceedings after they occur if it turns out something classified has leaked. And at one moment during the trial, one of the defense attorneys accidentally spoke the last name of one of the witnesses who had been placed under anonymity as well ... and we were asked after that leaked not to report it. So there are a number of considerations that reporters covering the military commissions have to adhere to as a condition of attending them."

On the interrogation methods used on Omar Khadr

"One of the things that we heard in Omar Khadr's pretrial hearing was a parade of interrogators, most of whom testified under a cloud of anonymity that they did not subject Khadr to that type of abuse, particularly at Guantanamo Bay. We heard a lot about how he was seemingly interested in building a rapport with interrogators, particularly a very young and attractive woman interrogator, who described herself as being assigned to Khadr's case because she was a motherly figure ... but all of his Guantanamo interrogators talked rather openly about how they sought to build rapport with him, how they endeavored very strongly not to abuse him and to establish that the statements Khadr gave in an affidavit that he had been abused at Guantanamo were not true.

"But then we heard, that before any of them had interviewed Khadr or interrogated Khadr, we heard testimony that Omar Khadr was subject at Bagram, shortly after his capture -- in which he suffered nearly fatal gunshot and shrapnel wounds -- to a stress position, in which his hands were elevated to the height of his forehead and shackled to the outer door of his cell for a prolonged period of time in which his medics found him crying underneath a hood that was placed over his head. We also heard a story from the first person who ever interrogated Khadr ... that part of Khadr's interrogations featured Interrogator No. 1 telling the then-15-year-old detainee a quote 'fictional story' according to Interrogator No. 1 about a different young detainee, who didn't cooperate with his interrogators, who was taken to a prison in the United States [and] who was raped and ultimately killed."