Accessibility links
Movie Review - 'Robin Hood' - Not Entirely On Target Following in the footsteps of Errol Flynn and Cary Elwes, Russell Crowe is yet another Robin Hood. This new version tells the archer's origin story -- but critic Kenneth Turan says it's a messy mix of geopolitics, repressed-memory plot twists, human-rights advocacy and more. 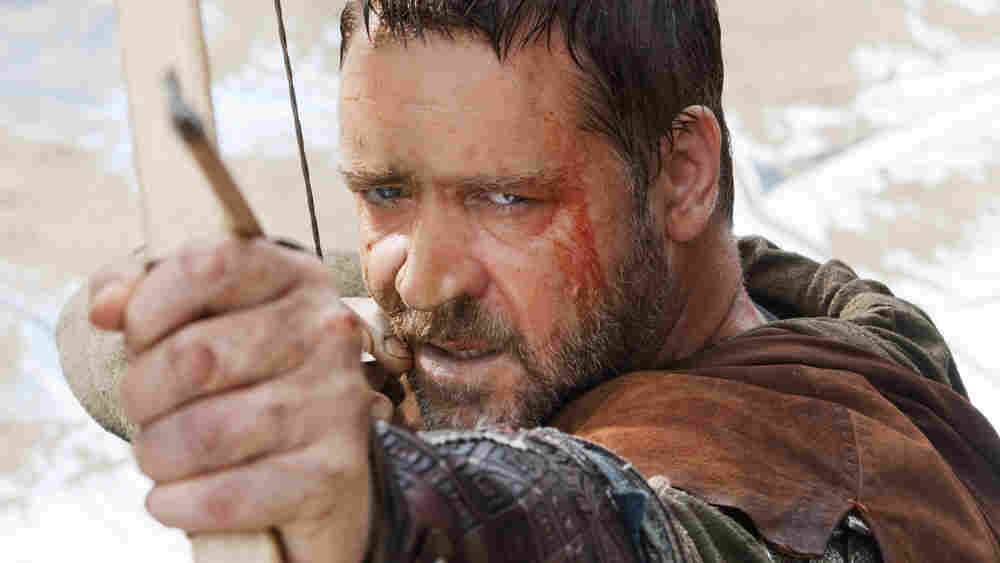 'The King Does Not Bargain'

When you call a movie Robin Hood, you set up expectations: a gallant archer, a band of Merry Men, and a certain criminal camaraderie in Sherwood Forest. But as is the Hollywood vogue with iconic characters these days, the newest film of that title is an origins story -- a kind of Robin Before the Hood -- and it turns out to be a cumbersome, too-complicated tale.

With Russell Crowe in the title role, it's an awkward mix of international geopolitics, repressed memory, old-fashioned villainy, human rights advocacy, the Magna Carta and pigeons that send secret messages.

This Robin Hood does have a Marion, but as played by Cate Blanchett she's no maid -- and doesn't take kindly to a plot twist that has Robin pretending to be her husband.

Blanchett is an actress who is always involving, and Crowe is very much in his element as an intrepid, laconic archer who lets his arrows do the talking. (He apparently spent untold months learning to shoot like someone raised in the Hood, firing as many as 200 arrows a day in a relentless quest for accuracy.)

Director Ridley Scott's facility with spectacle makes everything he does worth investigating, but this film lacks the clarity of his work in Blade Runner and Black Hawk Down.

And while every generation, it seems, is fated to have an arboreal English outlaw to call its own, this take on the tale misses the joy of the earlier films starring Errol Flynn and Douglas Fairbanks that captivated previous generations. Once the buckles have all been swashed, it's hard not to wish that this Robin Hood was as nailed-down as all those on-target arrows.