Accessibility links
Neil Armstrong Criticizes Obama Space Plan The first man to walk on the moon said Wednesday that plans to revamp the human space program would cede America's longtime leadership in space to other nations. Armstrong made his remarks at a Senate Commerce Committee hearing, where he questioned President Obama's new vision for the future of human spaceflight. 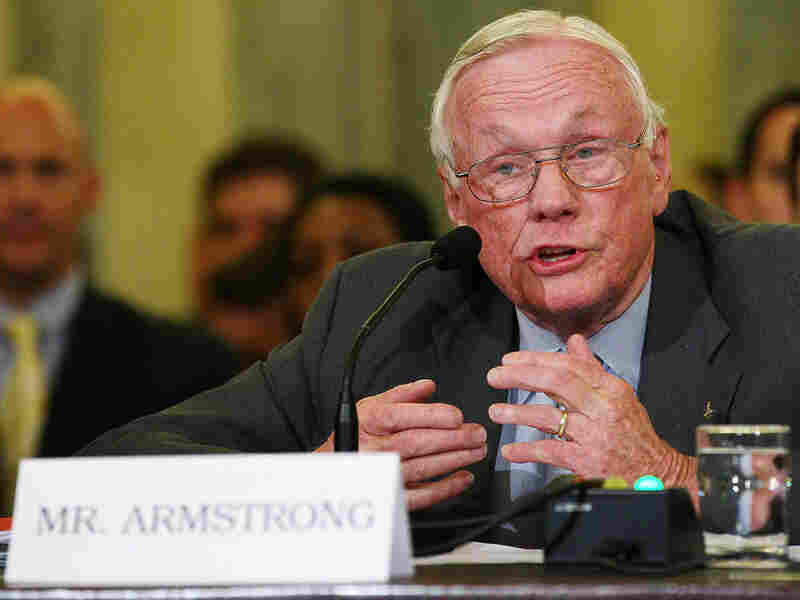 Neil Armstrong, commander of the Apollo 11 mission, was the first man to walk on the moon. Win McNamee/Getty Images hide caption 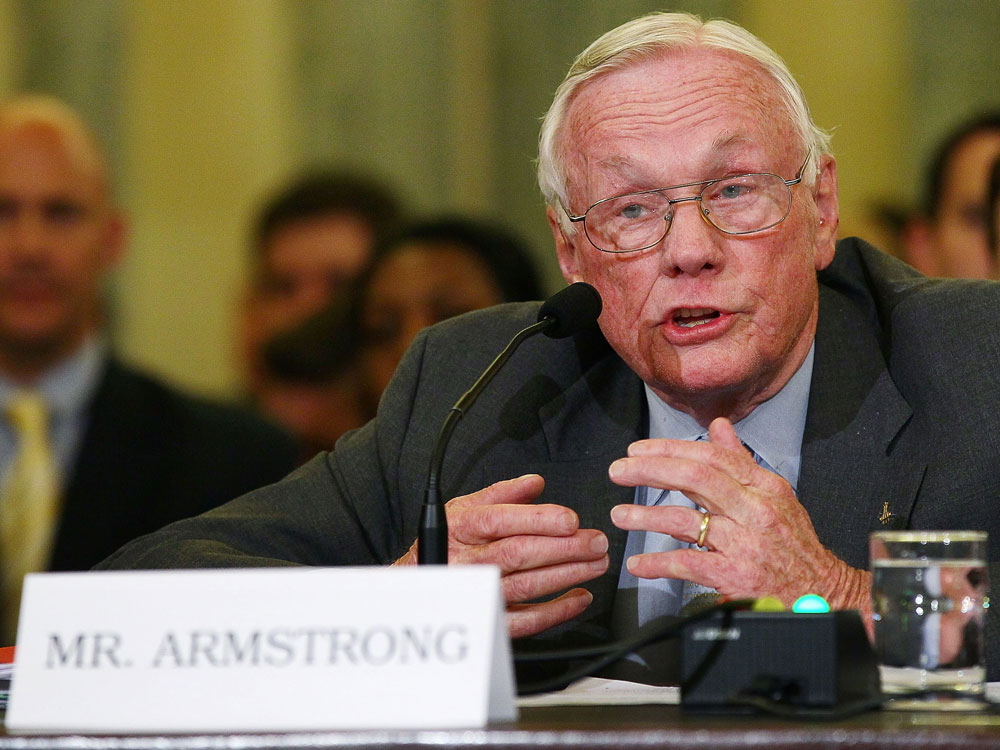 Neil Armstrong, commander of the Apollo 11 mission, was the first man to walk on the moon.

The first man to walk on the moon, Neil Armstrong, went before a Senate hearing Wednesday afternoon to question President Obama's new vision for the future of human spaceflight.

Armstrong told lawmakers that he worries about the possibility that NASA would lose its edge in spaceflight, if it spent years without its own way of flying astronauts.

"If the leadership we have acquired through our investment is simply allowed to fade away, other nations will surely step in where we have faltered," said the Apollo 11 commander. "I do not believe that this would be in our best interests."

Armstrong was skeptical of Obama's plan to rely on new space taxis developed by private companies after the space shuttles are retired. And while Obama has argued that NASA should be aiming for new destinations -- like asteroids -- Armstrong said he believes that there would be real benefits to returning to the moon, as NASA had planned.

Armstrong and Eugene Cernan -- the last astronaut on the moon -- told a Senate Commerce Committee hearing that the Obama plan was short on ambition, including the decision to alter the Bush administration's goal of establishing a permanent presence on the moon.

Cernan said that he, Armstrong and Apollo 13 Commander James Lovell agreed that the administration's budget for human space exploration "presents no challenges, has no focus, and in fact is a blueprint for a mission to 'nowhere."' Lovell, while not present at the hearing, issued a statement opposing Obama's NASA budget.

Last month, Obama told NASA workers in Cape Canaveral that he was committed to manned space flight and foresaw sending astronauts to an asteroid and, by the mid-2030s, sending humans to orbit Mars.

Speaking in the administration's defense, John Holdren, head of the White House Office of Science and Technology Policy, cited a blue-ribbon report that found that President George W. Bush's Constellation program was unexecutable because of budgetary constraints. The administration "is steadfast in its commitment to space exploration," he said.

Buzz Aldrin, who partnered with Armstrong in the Apollo 11 moonwalking mission in 1969, has supported the president's plan. 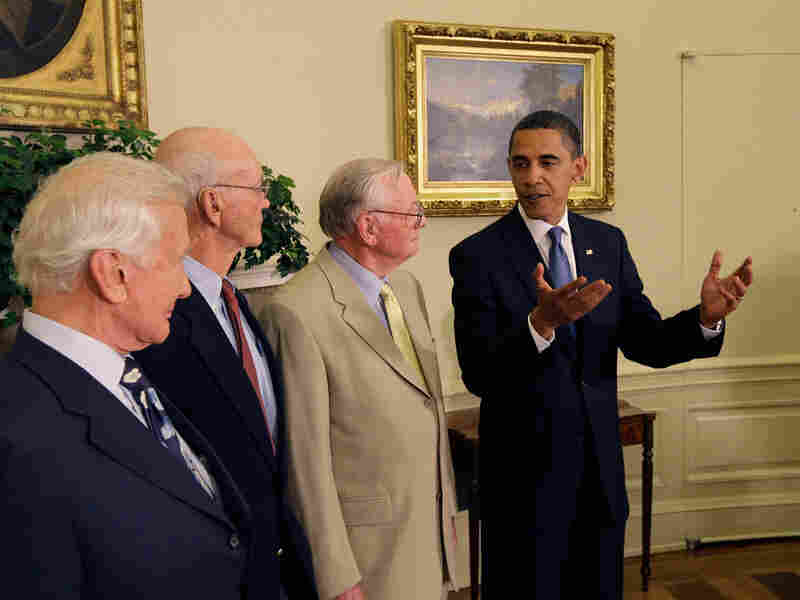 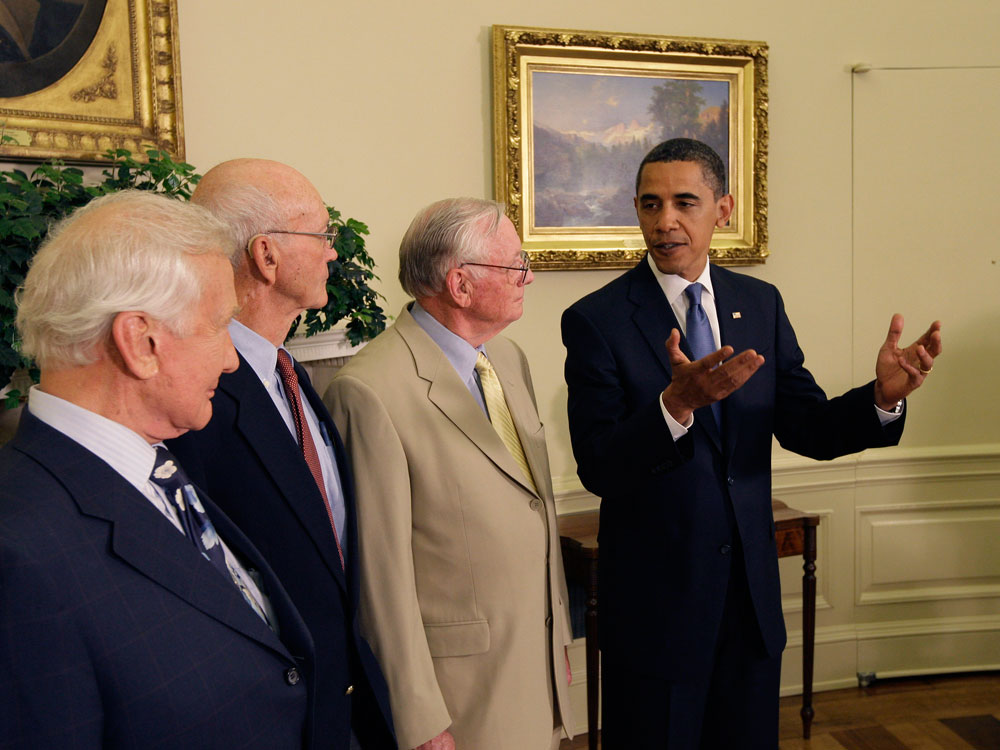 Committee Chairman Sen. John D. Rockefeller, a West Virginia Democrat, reminded critics that NASA's current budget of $18 billion may be a high water mark because of budget constraints and "defenders of the status quo for NASA seem to justify their views solely because of the impact of jobs."

The Bush plan called for termination of the International Space Station, development of a new rocket that would support lunar missions, and establishing a permanent station on the moon that could be the jump-off spot for future trips to Mars.

Obama would extend the life of the space station until at least 2020, promote privately built craft to fly to the space station as the shuttle ends its service, make a decision no later than 2015 on a heavy lift rocket and plan for a trip to an asteroid by 2025 and then on to Mars.

Armstrong acknowledged that the Bush space blueprint had not been adequately funded. But he said waiting for the private aerospace industry to develop low-earth-orbit spacecraft would result in limiting the United States to buying passage to the space station from Russia.

He said the Obama plan was "contrived by a very small group in secret" who persuaded the president that this was the way to put his stamp on the space program. "I believe the president was poorly advised," he said.

Cernan was even harsher in his criticisms, predicting it will take as long as a decade for the private sector to access low Earth orbit safely. Obama's space budget projects either show extreme naivete or a willingness to accept a "plan to dismantle America's leadership in the world of human space exploration," he said.

Holdren said the plan was devised after an extensive and open process. It was based on findings of the U.S. Human Space Flight Plans Committee, also known as the Augustine Committee, which had six public meetings.

Cernan said NASA administrator Charles Bolden warned in a briefing last week the failure of the private sector to provide spacecraft in a timely way could result in a bailout equal to that given the auto industry.

Bolden, who also testified at the hearing, said he did not recall making that remark.

The top Republican on the panel, Sen. Kay Bailey Hutchison of Texas, also queried Bolden about the ability of the private sector to meet its goals. "You are putting all of our dreams and hopes and taxpayer dollars into this commercial investment."

Bolden said the target was to have the first manned commercial flight to the space station by 2015.

Armstrong and Cernan last month joined other astronauts and space officials in writing a letter protesting the canceling of the moon program.

With reporting by NPR's Nell Greenfieldboyce and The Associated Press