Accessibility links
On U.S. Visit, Karzai Gets Red-Carpet Treatment President Obama and Afghan leader Hamid Karzai meet at the White House in hopes of easing recent tensions and settling on a way forward in Afghanistan, where U.S. troops are preparing for a major military operation. 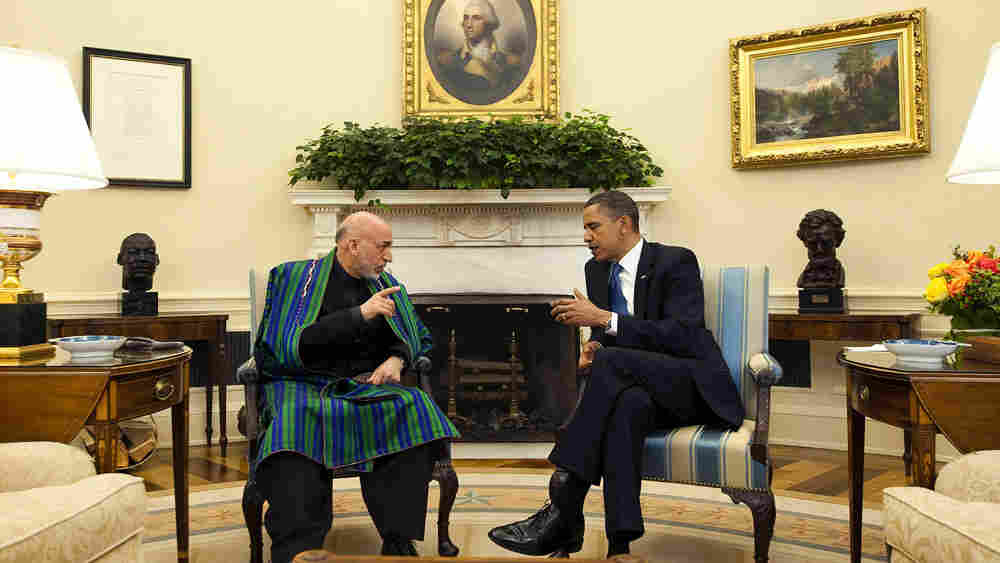 President Obama speaks with Afghan President Hamid Karzai on Wednesday during a meeting in the Oval Office at the White House. Jim Watson/AFP/Getty Images hide caption 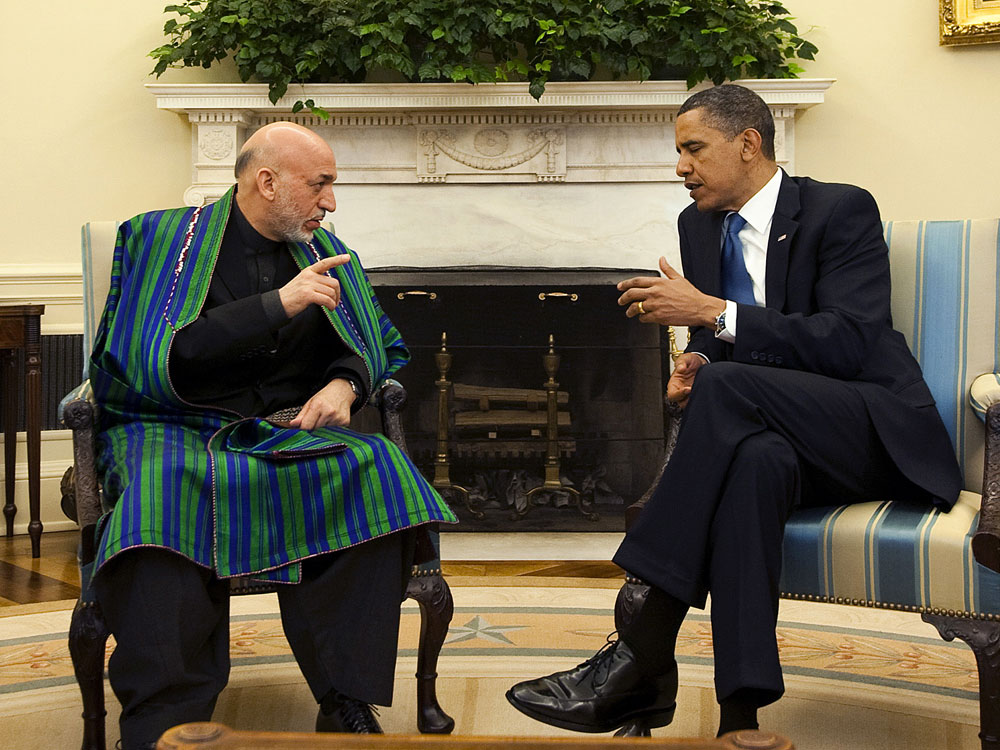 President Obama speaks with Afghan President Hamid Karzai on Wednesday during a meeting in the Oval Office at the White House.

President Obama and Afghan President Hamid Karzai sought to set aside their recent differences during a White House meeting Wednesday and decide on a way forward in Afghanistan, where U.S. troops are preparing for a major military operation.

Several weeks ago, it seemed doubtful that Karzai's trip to Washington would even happen. The Obama administration angered the Afghan leader by pressuring him to crack down on government corruption. Karzai, in turn, accused the West of meddling and made a series of statements that alarmed U.S. officials.

Speaking at a joint appearance with Karzai at the White House, Obama said the differences between the two nations had been "overstated" but that "obviously there are going to be differences in a complicated and difficult environment."

Karzai said ties between the U.S. and Afghanistan are "not an imaginary relationship. It's a real relationship."

In a reference to ongoing U.S. concerns over corruption in Afghanistan, Karzai said, "We will work with dedication and extreme care" to use resources wisely.

"There are, of course, issues that are of concern to all of us," he said. "There are still shortcomings in Afghanistan. It’s still a very poor country."

The conciliatory talk is part of the new approach the White House has taken during the four-day visit. Karzai will get red-carpet treatment, with receptions, dinners and high-level meetings with U.S. officials.

The fact that Karzai will be moving within the inner circles of Washington gives him a certain amount of respect among the Afghan people, Gilles Dorronsoro, a visiting scholar with the Carnegie Endowment for International Peace, told NPR's Jackie Northam.

The president acknowledged the desire of his Afghan counterpart to "open the door to Taliban who cut their ties to violence" but said that it had to be part of an Afghan-led effort. He also said the U.S. was "committed" to transferring detention facilities it now runs over to the Afghans, something Karzai said he welcomed.

Secretary of State Hillary Clinton stressed the importance of U.S.-Afghan relations Tuesday after intensive talks with Karzai at the State Department.

"By deepening that strategic partnership, we will make progress on our shared vision and we will deepen the bonds between our nations and peoples," Clinton said. "And those bonds will endure long after the last combatant has laid down his arms."

With Karzai at her side, Clinton told an evening reception that the enormous sums of military and international humanitarian assistance offered to Afghanistan were a "great vote of confidence" in the Afghan leader and his government.

The shift in approach comes from a realization that the type of pressure Washington has put on Karzai has backfired, according to Nathaniel Fick, head of the Center for a New American Security.

"I think one of the great lessons is [that] the approach that the United States took last year of really publicly criticizing Karzai on corruption and governance and other issues didn't work," Fick told NPR. "Now we have both come to the conclusion that we are each other's best possible partner, and now we have to find a way to work together."

Karzai acknowledged the U.S. sacrifice in his country during a visit to wounded soldiers at Walter Reed Army Medical Center. "The visit to the wounded ... was once again a stark reminder that we together have a difficult journey to make," he said afterward.

The meeting with Obama comes as the White House prepares to send more troops to put down a resurgent Taliban and meet its goal of beginning a troop drawdown in July 2011. Some 60,000 U.S. troops are currently in Afghanistan, where a major military push is expected this summer in Kandahar, the spiritual birthplace of the former Taliban regime.

Clinton sought to reassure Karzai on Tuesday that the withdrawal would be a "responsible, orderly transition in the international combat mission in Afghanistan." She said the U.S. "will not abandon the Afghan people."

While Clinton and Karzai stressed the positive aspects of their nations' relationship, they acknowledged that sharp differences remain.

The ability to disagree on issues of importance to our respective countries and peoples is not an obstacle to achieving our shared objectives," Clinton said Tuesday. "Rather, it reflects a level of trust that is essential to any meaningful dialogue and enduring strategic partnership."

Karzai agreed it was natural for Kabul and Washington to see the situation differently while working together toward the same goals.

"As two mature nations and two mature governments -- by now the Afghan government is mature, too -- we will be having disagreements from time to time," he said.

Karzai is likely to urge U.S. officials to support his proposed political reconciliation with the Taliban -- ousted from power after following the U.S. invasion in December 2001 -- back into government. The Obama administration has backed efforts to reintegrate low- and midlevel Taliban fighters back into Afghan society but is wary of any plan that includes Taliban leaders.

In Afghanistan, motorcycle-borne attackers gunned down the No. 2 prisons official in the southern province of Kandahar, according to government officials on Wednesday. Two officials say Kandahar deputy prisons administrator Nabi Gul was killed in the Dand Chawk neighborhood of the provincial capital shortly after dawn. The Taliban claimed responsibility.