Accessibility links
Website Editors Strive To Rein In Nasty Comments It's easy to lose your temper on the Internet. Anyone who reads -- or writes -- comments on blogs and news sites knows that the conversation can quickly digress into scathing personal attacks. For years, many sites just let users go at it, but now editors are requiring people to keep their comments civil. 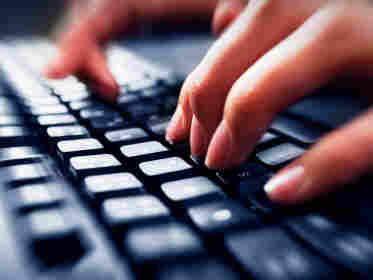 It's easy to lose your temper on the Internet. Anyone who reads -- or writes -- comments on blogs and news sites knows that the conversation can quickly stray from civil discourse to scathing personal attacks. For years, many websites just let users go at it, and free speech reigned. But now editors are rethinking just how open their sites should be.

Many people who want to participate in online discussions are quickly turned off by the nastiness. Miki Hsu Leavey, a resident of Napa, Calif., wrote a heartfelt, thankful letter to her local paper, The Napa Valley Register, after the health care bill passed. In the letter, she described her own struggle with lupus, her son's difficulties getting insurance owing to his pre-existing heart condition, and her husband's liver cancer diagnosis.

"My thank you note was really about the relief I had mentally," says Leavey.

When Leavey looked at the site the morning her letter was published, she was shocked at many of the comments.

"Oh, my poor baby is sick only the great Obama can save him," wrote one sarcastic reader. "Makes me sick just reading it."

Leavey couldn't believe how personal the attacks were. "I guess I wrote a personal story so maybe that's what I asked for," she says. "I just didn't think people would say what they said."

Researchers who study human behavior say it was predictable that it would turn out this way. Clifford Nass, a communications professor at Stanford University, says when you have an environment where thousands of people are vying for attention, people know intuitively that it's the nasty stuff that jumps out.

"Ironically and tragically, if you want people to respond to what you say, say something outrageously negative," says Nass.

There are still plenty of sites out there that encourage this kind of dialogue, says Scott Rosenberg, author of Say Anything: How Blogging Began, What It's Becoming, and Why It Matters.

"What they really wanted was to boost traffic on their websites," says Rosenberg, "because the more pages that are viewed, the more ads can be sold."

But, he also believes many sites were simply naive and bought into the early open zeitgeist of the Web.

"Many media companies simply opened the doors to their websites and said: 'Anybody come post whatever you want' and expected that they would have brilliant conversations and exchanges of ideas."

Now that sites are discovering that openness doesn't necessarily translate into meaningful conversations, they are starting to change and adapt.

Religion Dispatches, a site that features long-form articles by scholars and academics, had an angry funder on its hands when offensive comments were posted on an article by an expert on Islam. Religion Dispatches has a drastic solution: It is getting rid of comments. Readers have to send a letter or e-mail to the editor, and only the best letters get published.

Editor Lisa Webster says the goal is to cultivate a site that's more like The New York Review of Books, where the letters are often as interesting as the articles. Webster suspects that the site may lose some traffic initially, but she's "hoping it will be sort of a dip of the roller coaster ... and then it'll tick back up eventually once people discover how fascinating the letter section really is."

Other sites are taking a different approach -- they want to keep that fast-paced reader response and clean up the comments. At the San Diego Union Tribune, site content director Tom Mallory says he's seen the benefits of open comments.

Recently, the Tribune posted a headline on the site that angered users. It was about a man who was murdered by young men who were spray painting a wall. "The headline unfortunately referred to 'graffiti artists,' which made it seem that they were van Gogh with a spray can," Mallory explains.

Overnight, while no one at the Union Tribune was watching, commenters accused the paper of having a agenda.

When Mallory came in the next morning, he considered the users' comments, and decided that he agreed with them: "I said that's a good point; I'll fix the headline."

Then Mallory began to have a dialogue with the readers. "It was a valuable reader exchange," he says. "I'm glad it happened."

He realized that having someone on the staff be part of the conversation could change the tone. Unfortunately, he says, they don't always have the staff available. So the Union Tribune -- and many other sites in similar circumstances -- are using software to help out.

"With software you can ban certain words and phrases," Mallory explains.

Mallory thinks that letting commenters be anonymous can also be problematic. The Union Tribune is using software called Disqus, which lets the staff track users, keep a record of their comments -- and then ban them if necessary. The makers of Disqus say that their two-year-old product is now being used by 350,000 sites.

Lila King, a senior producer at CNN.com, doesn't think that forcing commenters to reveal their identity is going to resolve the problem. She says CNN has always checked that the e-mails or comments belong to real people. She thinks the only real solution is to have a real, live human being curate and participate in the discussion.

"Really, it's the human touch," she says. "It's actually staying inside the conversation and being active and highlighting comments that we think editorially are really interesting or significant. Set the tone for what you hope the conversation will be."

King thinks if you reward people for thoughtful comments, the site will be more likely to get more of them -- and fewer of the hateful sort of comments that were posted on Leavey's health care letter.

Leavey says she didn't mind that people disagreed with her letter -- she just wanted the conversation to be more civil.

"I think it would be wonderful if we could challenge people who really disagree to have a really great conversation about it," Leavey says.

If all of these changes, both technical and personal, can manage to raise the level of discussion, many site editors are hoping more people will feel comfortable wading into the conversation -- instead of just looking on as it explodes.