Accessibility links
Life On An American Campus In The UAE The United Arab Emirates has attracted a slew of U.S. schools that are eager to scoop students who want an American degree. Michigan State in Dubai has about 100 students who come from all over South Asia and the Arab world. And in Abu Dhabi, an NYU outpost could change the definition of an overseas campus.

These students represent a sampling of the many countries who have sent residents to UAE for work and study. From left: Kubatbek Alimbekov from Kyrgyzstan; Shafaq Mirza from Pakistan; Suzah Tasleem from Tunisia and Pakistan; Saeed Yadolaki from Iran; and Der Rajeeth from India Larry Abramson/NPR hide caption

These students represent a sampling of the many countries who have sent residents to UAE for work and study. From left: Kubatbek Alimbekov from Kyrgyzstan; Shafaq Mirza from Pakistan; Suzah Tasleem from Tunisia and Pakistan; Saeed Yadolaki from Iran; and Der Rajeeth from India

For decades, American universities have experimented with "branch campuses" in remote outposts of the world. The latest magnet is the Middle East, and the United Arab Emirates has attracted 40 outposts from schools based all across the globe.

At the Dubai International Academic City in the UAE, a typical group of students is sitting and chatting in a common area of this new education development. Dubai Academic City opened in 2006 and houses schools from around the globe, including Michigan State University. These students represent just about every ethnicity in this multicultural country: Pakistan, Tunisia, Iran, India, Pakistan, Kyrgyzstan.

Students come to Dubai International Academic City from all over South Asia and the Arab world, drawn by the chance to attend Western universities while living with family in Dubai. Noncitizens here cannot attend local universities, and since 70 percent of the population is foreign born, the demand for schools that accept noncitizens is huge.

"We are a major American university. The parents see a major advantage in being able to capitalize on an unrestrained American education, locally," Mullan says.

Mullan, who originally hails from Northern Ireland, used to teach at the East Lansing campus of Michigan State, where many of the 47,000 students live on campus. Here, there are only about 100 students in total, but only 20 or so live in dorms that are located half an hour away in an anonymous housing block. So, in addition to setting up this campus and luring faculty to this part of the world, Mullan has to create some social glue here. "We don't want to be a commuter school. We want the students to engage in school activities," Mullan says. "We already have established student athletic teams. We have a football team, an aspiring cricket team."

Michigan State also faces huge competition here. Twenty-eight schools based in countries from Pakistan to Australia have branch campuses in Dubai Academic City. So this Midwestern school has to differentiate itself.

Brendan Mullan, dean of Michigan State University in Dubai, says that although so many students live off campus, he does not want it to be a commuter school. Student athletic teams, he hopes, will create some needed social glue. Larry Abramson/NPR hide caption

One recent afternoon, students and faculty gathered to hear Mike Devereux, president of Middle East operations for General Motors. He came to speak to students about GM's stake in the region. Devereux noted that GM sells more cars abroad than it does in the U.S., so growth in the region is key to the company's success. And of course, the health of MSU's home state depends on GM's future.

Mullan says that MSU's roots in a struggling manufacturing state make it even more important for the school to expand overseas.

This campus has itself been hit by the downturn, which slowed expected enrollment here. But Michigan State says this is the place to be, and it's here to stay. The school hopes one day to accommodate 800 students in Dubai. As bold as that plan is, just up the road, a rival U.S. school is working on something even grander.

Downtown Abu Dhabi, one emirate over from Dubai, is full of construction cranes. But in the midst of the din, there is an island of peace: the green space of the exquisitely groomed and generously watered garden belonging to New York University, Abu Dhabi. Starting in the fall, says campus vice chancellor Al Bloom, this will be the site, not simply of a branch campus, but of something that he believes is totally new.

"I really believe it will be a global university. It will be connected to NYU New York and to NYU's other 15 sites around the world," Bloom says.

The brand new facility was built and paid for by the local emir. These are just temporary digs until the government here builds an even more splendid home on Saadiyat Island, where the neighbors will be local versions of the Guggenheim and Louvre museums. As an example of the potential of NYU's global connections, Bloom points to the professor who designed the garden for the new campus. 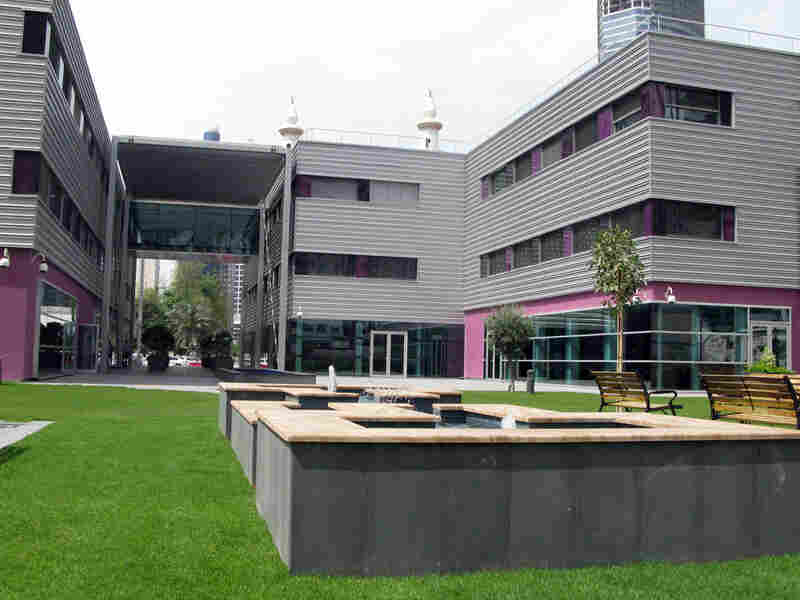 NYU's Abu Dhabi campus, built and paid for by the local emir, is actually a temporary arrangement. The government is building the permanent campus on nearby Saadiyat Island. Larry Abramson/NPR hide caption 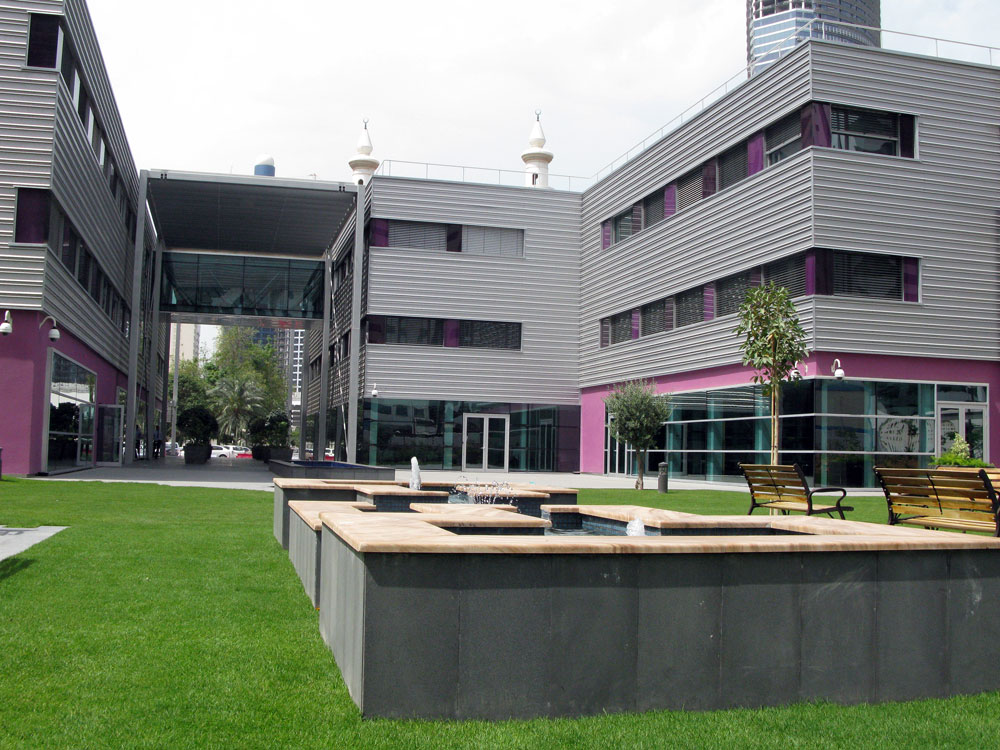 NYU's Abu Dhabi campus, built and paid for by the local emir, is actually a temporary arrangement. The government is building the permanent campus on nearby Saadiyat Island.

Many branch campus aficionados speak of the way these undertakings broaden students' experience. They say these transnational schools will build bridges to a part of the world that is the source of many misunderstandings. But by having a base here, NYU will have to cut itself off from at least one country -- students and faculty from Israel cannot get visas to the UAE.

NYU's vast vision might scare off some competitors with less money from building in the region -- and that might be wise. Many American schools moved into Japan in the 1980s; most failed and had to fly back home. And just last year, George Mason University abandoned an effort in the UAE. So while the Middle East remains fertile ground for these experiments, the risk of failure is still high.