Accessibility links
With Manzari Brothers, Hines Taps A New Generation When Maurice Hines was young, he and his brother Gregory were sibling tap dancing sensations. Now Maurice has discovered another pair of young brothers who tap: John and Leo Manzari. The Manzari brothers perform with Hines in a production of Duke Ellington's Sophisticated Ladies at the Lincoln Theater in Washington, D.C.

When Maurice Hines was young, he and his brother Gregory were sibling tap dancing sensations. Now Maurice has discovered another pair of young brothers who tap: John and Leo Manzari. The Manzari brothers perform with Hines in a production of Duke Ellington's Sophisticated Ladies at the Lincoln Theater in Washington, D.C. 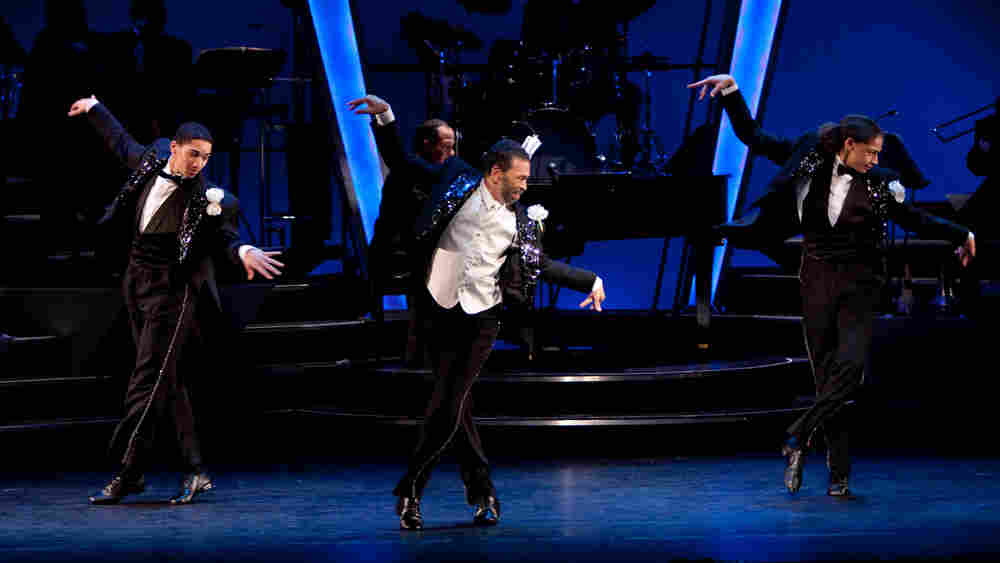 Maurice Hinds with John (at left) and Leo Manzari, from the Arena Stage production of Duke Ellington's Sophisticated Ladies at the Lincoln Theater in Washington, D.C. Scott Suchman hide caption

In Washington, D.C., the birthplace of Duke Ellington, a theater production celebrates the life and the music of the great jazz composer and big band leader. It's a revival of "Sophisticated Ladies," the Broadway musical that wrapped up a raft of Tony Awards in the early '80s.

NORRIS: Gregory and Maurice Hines, the sibling tap dancing sensations, were both in the original run of "Sophisticated Ladies." This time around, the older brother, Maurice, is on his own. Gregory Hines died of liver cancer in 2003. Maurice is now 66 years old, but you wouldn't know it as you watch him slide and saunter and tap across the stage. At one point, he even does a carefully choreographed cartwheel.

Hines is like the master of ceremonies in a journey through Ellington's amazing catalog of music. In the midst of all the tap dancing and torch songs, a torch is also being passed. In the same way that the fabulous dancing Nicholas Brothers inspired and mentored the Hines siblings, Maurice Hines has discovered a new sibling sensation: the Manzari Brothers - John, age 17, and Leo, age 15.

NORRIS: What you're hearing there are the Manzari Brothers tearing up the stage - bodies bent forward, feet flying in unison. Leo's mane of Raggedy Ann curls is also airborne. In his tuxedo, the older brother, John, looks years beyond his age until he grins the way only teenagers do. Their mix of athleticism and artistry bring down the house at every single show.

NORRIS: After a matinee performance, I spent time backstage with Maurice Hines and asked him how he found the Manzaris.

Mr. MAURICE HINES (Actor, Singer, Dancer): Teaching a class at Duke Ellington, and I was teaching this jazz-hip-hop choreography that I had done for "Hot Feet," which was a musical that was here at the National for Maurice White of Earth, Wind and Fire, of course, and I noticed Leo because of his curls. And every time he would jump up, you know, and then I said, well, jeez, he's really doing this jazz, he's older.

Mr. HINES: Yeah, of curls. But he was doing the choreography fantastic. Well, it was very difficult. I said, how old are you? And Leo at that time was 14 and John was 16. So, I said, really? And a lightbulb went over my head. I said, well, can you guys tap? So, John said, yeah, we can, with an attitude. So I said, well, come to the audition at the Lincoln tomorrow and we'll see what you can do.

And when they came and they did everything and then sang too, I said, oh. And they reminded me so much of Gregory and myself when we were that age. They're much greater than Gregory and I were at that age though, 'cause we didn't do everything then. I went to ballet and jazz later in my life. But they are there now and they are spectacular.

I mean - so it was a joy to put this number together for them. So, especially after I tapped, to bring them out and pass the mantle. And my brother, I can feel his presence when they're dancing and looking at them. It's very emotional for me.

NORRIS: That must be bittersweet.

Mr. HINES: It is 'cause Gregory would be so proud. 'Cause I had discovered Savion Glover, had come to my school in New York - Frank Hatchett, my teacher, and I started a school and he came. And I knew once I talked to him, I knew Savion didn't want to do anything but tap, so I knew Gregory was the right one for him and I wasn't, 'cause I wanted the dancer to do everything. And, of course, Gregory was the right one for him.

And Gregory said to me, well, one day you're going to find the dancers for you, and I did. Just wait long enough and things happen, and I did. And I found these Manzari Brothers and I'm thrilled. And they're going to be big, big stars, big stars.

NORRIS: There's something circular about this, because you know that they started while watching you and your brother on television in "Sesame Street."

Mr. HINES: Today, my brother and I are going to be talking about near and far.

NORRIS: Years ago, the Hines Brothers danced their way through a "Sesame Street" segment to help teach children the concept of distance.

Mr. HINES: And this is far.

NORRIS: Though it was years ago, the Manzari boys still remember every bit of that sequence. Once they got out of their tuxes and into their sweatpants, I spent some time with John and Leo. For all their showmanship on stage, the two are actually kind of shy. We talked about how they balanced rehearsals and homework, and I asked John if he actually did throw a little attitude when Hines asked him if he knew how to tap.

Mr. JOHN MANZARI (Dancer): If I did, it didn't mean to come out that way. It just kind of came out that way. I might have thrown attitude accidentally when he didn't believe me. I was just like, yes, I could tap, I could tap. So that -but that was an accident. I wasn't trying to be a jerk. So...

NORRIS: What size shoe is that?

NORRIS: Okay. So, you're 15 years old and you're holding on to that shoe and you're talking about how much you love that shoe but that shoe is not going to fit you much longer 'cause you're still growing.

NORRIS: John, you're a senior.

NORRIS: Do you know what you're going to do next year?

Mr. J. MANZARI: I thought I did. If I go to college, I'm going to Marymount Manhattan, but it all depends on what happens with the show. Because when you go to college for dance, you're not allowed to audition or perform until you're a senior. So, I don't want to turn down an opportunity like this to do that. I will definitely go back to school after this, but I think right now if something were to happen with the show, I will do the show and then go back to college.

NORRIS: This must be a difficult moment for the two of you, though. You've been dancing together since you were standing in front of the television bopping around to "Sesame Street." How will the brother act continue when one of you goes off to college?

Mr. L. MANZARI: I look at it as a pause. It's not like it's stopping, you know, never going to reconnect. And plus, he comes home - I mean, Marymount Manhattan is only, like, four hours away. We can still maintain the brother act when we get back together a little later.

NORRIS: It's clear that John and Leo are very close and breaking up, even temporarily, will be tough. That's something Maurice Hines knows all too well.

Mr. HINES: It's funny. I'll tell you a quick story. We were doing the "Cotton Club" movie, and we had separated by that time as far as he was doing movies and I was still in the theater. And I had a dance company with Mercedes by that time. And we were leaving the set and we had just done our big dance number for Francis Coppola, and Gregory asked me, he said, Maurice, do you still like dancing with me?

It came out, but it was so charming. And I said, Gregory, why so silly? I'm like, what are you talking about? He said, well, you have a dance company now. You know, I'm doing this and we haven't danced together. I said, Gregory, it's an honor to dance with my brother. It's not just - I love it, I love it. When Gregory and I danced together, it was magical.

And we had this thing, and that's what the Manzari Brothers have. They have the thing.

NORRIS: And that Manzari thing can be seen and heard at the Lincoln Theatre in Washington, D.C., until June 6th.