Watch the video of the Gulf of Mexico oil spill

The amount of oil spilling into the Gulf of Mexico may be at least 10 times the size of official estimates, according to an exclusive analysis conducted for NPR.

At NPR's request, experts examined video that BP released Wednesday. Their findings suggest the BP spill is already far larger than the 1989 Exxon Valdez accident in Alaska, which spilled at least 250,000 barrels of oil.

BP has said repeatedly that there is no reliable way to measure the oil spill in the Gulf of Mexico by looking at the oil gushing out of the pipe. But scientists say there are actually many proven techniques for doing just that. 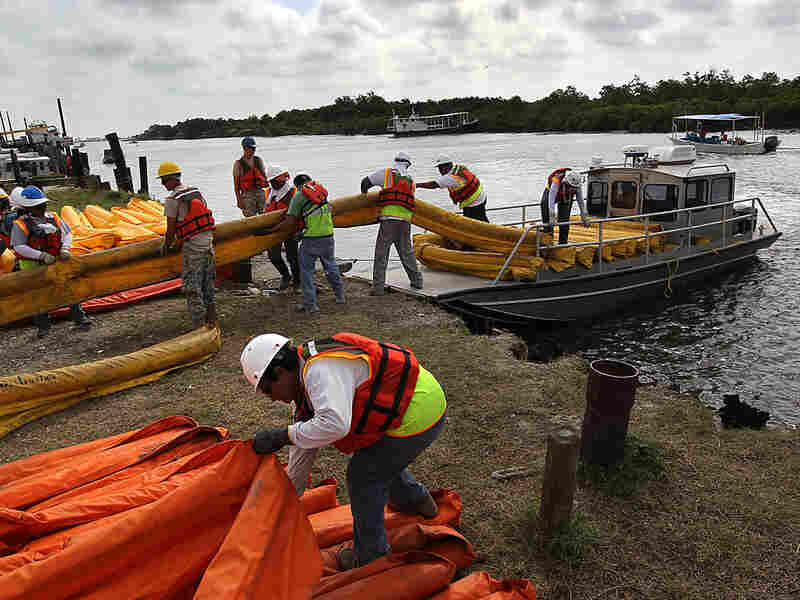 Contract workers load oil booms onto a boat to protect marshlands from the massive oil slick in the Gulf of Mexico on May 13, 2010 in Hopedale, Louisiana. The BP Deepwater Horizon oil rig continues to leak what may be an unprecedented amount of oil and gas into U.S. waters. John Moore/Getty Images hide caption 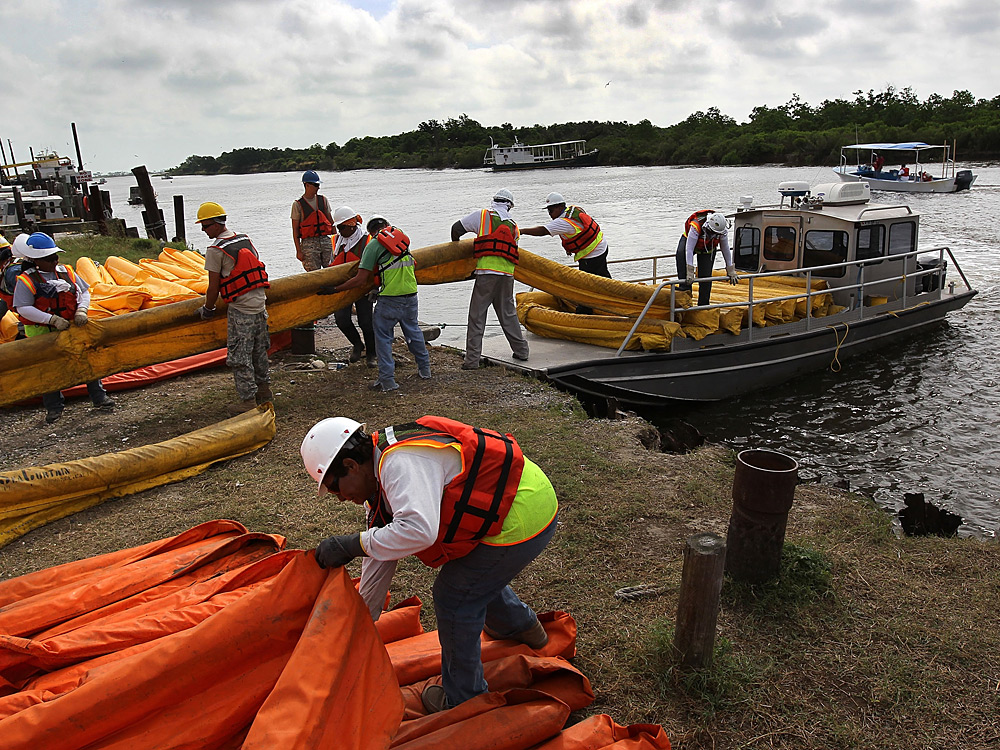 Contract workers load oil booms onto a boat to protect marshlands from the massive oil slick in the Gulf of Mexico on May 13, 2010 in Hopedale, Louisiana. The BP Deepwater Horizon oil rig continues to leak what may be an unprecedented amount of oil and gas into U.S. waters.

A computer program simply tracks particles and calculates how fast they are moving. Wereley put the BP video of the gusher into his computer. He made a few simple calculations and came up with an astonishing value for the rate of the oil spill: 70,000 barrels a day -- much higher than the official estimate of 5,000 barrels a day.

The method is accurate to a degree of plus or minus 20 percent.

Given that uncertainty, the amount of material spewing from the pipe could range from 56,000 barrels to 84,000 barrels a day. It is important to note that it's not all oil. The short video BP released starts out with a shot of methane, but at the end it seems to be mostly oil.

"There's potentially some fluctuation back and forth between methane and oil," Wereley said.

But assuming that the lion's share of the material coming out of the pipe is oil, Wereley's calculations show that the official estimates are too low.

"We're talking more than a factor-of-10 difference between what I calculate and the number that's being thrown around," he said.

At least two other calculations support him.

Timothy Crone, an associate research scientist at the Lamont-Doherty Earth Observatory, used another well-accepted method to calculate fluid flows. Crone arrived at a similar figure, but he said he'd like better video from BP before drawing a firm conclusion.

Eugene Chiang, a professor of astrophysics at the University of California, Berkeley, also got a similar answer, using just pencil and paper.

Without even having a sense of scale from the BP video, he correctly deduced that the diameter of the pipe was about 20 inches. And though his calculation is less precise than Wereley's, it is in the same ballpark.

Given this flow rate, it seems this is a spill of unprecedented proportions in U.S. waters.

"It would just take a few days, at most a week, for it to exceed the Exxon Valdez's record," Chiang said.

"We've said all along that there's no way to estimate the flow coming out of the pipe accurately," said Bill Salvin, a BP spokesman.

Instead, BP prefers to rely on measurements of oil on the sea surface made by the Coast Guard and the National Oceanic and Atmospheric Administration. Those are also contentious. Salvin also says these analyses should not assume that the oil is spewing from the 21-inch pipe, called a riser, shown in the video.

"The drill pipe, from which the oil is rising, is actually a 9-inch pipe that rests within the riser," Slavin said.

But Wereley says that fact doesn't skew his calculation. And though scientists say they hope BP will eventually release more video and information so they can refine their estimates, what they have now is good enough.

"It's possible to get a pretty decent number by looking at the video," Wereley said.

This new, much larger number suggests that capturing -- and cleaning up -- this oil may be a much bigger challenge than anyone has let on.