Accessibility links
Anti-Incumbent Mood Hovers Over Senate Primaries Voters in high-stakes Senate primary races Tuesday in Pennsylvania, Kentucky and Arkansas are expected to provide the most forceful display yet of the deepening anti-incumbent sentiment settling over the nation. Looking most vulnerable? Pennsylvania Sen. Arlen Specter. 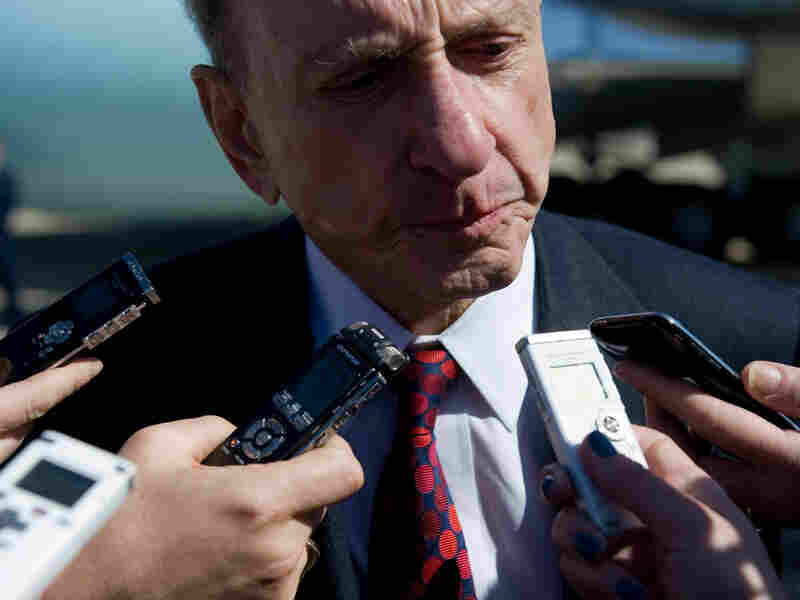 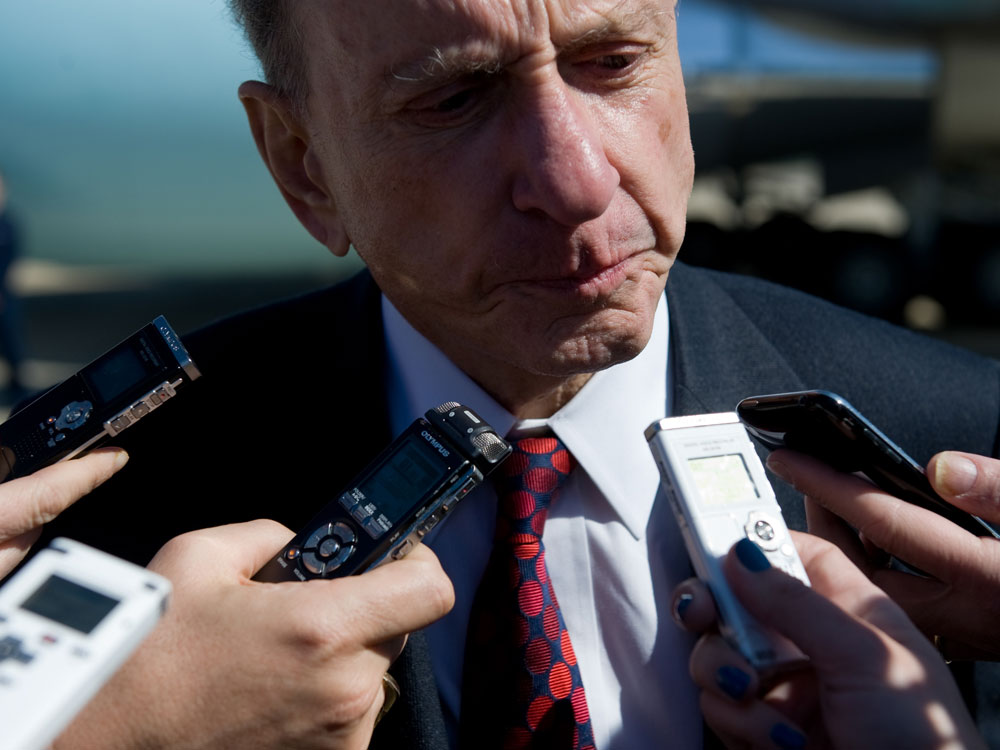 The pundits have dubbed it Super Senate Tuesday. And it's hardly an oversell.

Voters in high-stakes Senate primary races Tuesday in Pennsylvania, Kentucky and Arkansas are expected to provide the most forceful display yet of the deepening anti-incumbent sentiment settling over the nation and both major parties.

"It's out with the old and in with the new," says J. Brad Coker, director of the Mason-Dixon poll. "I don't know that this has ever happened before -- when an anti-incumbency mood has come from within both parties at the same time."

— In the Pennsylvania Democratic primary, five-term incumbent Sen. Arlen Specter, who until last year served as a Republican, faces a stiff challenge from Rep. Joe Sestak. Specter has been endorsed by Obama, but the momentum in recent weeks has been in Sestak's favor.

— Kentucky voters will go to the polls to pick a Republican to run for the seat being vacated by retiring Sen. Jim Bunning. Tea Party favorite Rand Paul, an eye doctor and son of conservative Texas Rep. Ron Paul, has been leading Secretary of State Trey Grayson. Grayson has been endorsed by Senate Minority Leader Mitch McConnell and the U.S. Chamber of Commerce. Paul counts Sarah Palin and Bunning among his supporters.

— Incumbent Sen. Blanche Lincoln faces two challengers in the Arkansas Democratic primary — Lt. Gov. Bill Halter and businessman D.C. Morrison. Lincoln has maintained a lead, but could face a June runoff if she doesn't get 50 percent of the vote.

On Tuesday, the sour state of mind threatens the three-decade Capitol Hill career of Pennsylvania Sen. Arlen Specter, the Republican-to-Democrat party-switcher who, despite President Obama's endorsement, is locked in a dead-heat battle with challenger Rep. Joe Sestak.

Tuesday's results also have the potential to weaken a politician not on the ballot: Senate Minority Leader Mitch McConnell, a Kentucky Republican.

And in Arkansas, polls show that two-term incumbent Sen. Blanche Lincoln is leading her Democratic primary challenger, Lt. Gov. Bill Halter. But union-funded attacks on Lincoln, and a third candidate siphoning off a small percentage of the vote, may deny her the 50 percent plurality she needs to avoid a June runoff.

"The Democratic Party here isn't changing as much as the nationalization of the race would suggest," says Janine Parry, a University of Arkansas professor and director of the Arkansas Poll. "We continue to be Southern Democrats here, and Blanche Lincoln fits that mode.

"But she's still been a victim of the stronger-than-usual anti-Washington mood," Parry says. 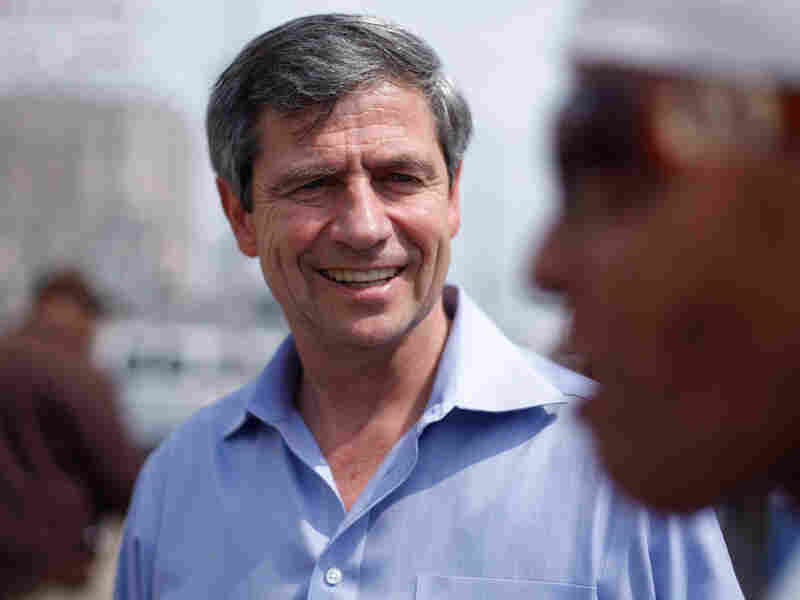 Rep. Joe Sestak, who is challenging Specter in the Democratic primary, is seen during a campaign stop near the Olney Transportation Center in Philadelphia, on May 14. Matt Rourke/AP hide caption 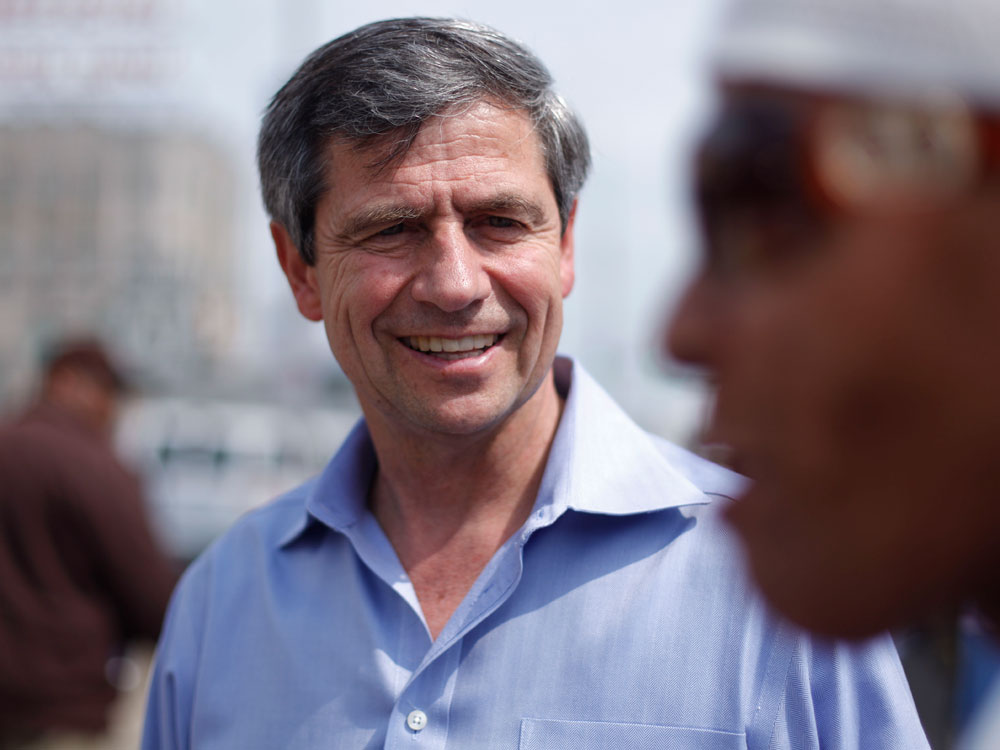 Rep. Joe Sestak, who is challenging Specter in the Democratic primary, is seen during a campaign stop near the Olney Transportation Center in Philadelphia, on May 14.

When Specter switched parties a year ago after being courted by Obama and other Democrats salivating at a potential 60-vote Senate supermajority, the longtime Republican didn't mince words.

He switched, he said, because he didn't believe he could survive a likely GOP primary challenge by former Rep. Pat Toomey. Anointed by Obama, Specter clearly never imagined that a Democrat would rise up to challenge him in Pennsylvania.

But the once-obscure Sestak, 58, a retired admiral endorsed Friday by MoveOn.org, has climbed in the polls. He has erased a 20-point deficit and turned the race into what pollster G. Terry Madonna of Franklin & Marshall College characterized last week in the Philadelphia Daily News as a "nail biter." And though Specter supporters have been touting the senator's ability to finish strong and his fresh endorsements from black leaders, the momentum in the past three months has been all Sestak.

Given the fed-up-with-Washington climate, Specter's campaign has struggled to make a case for the five-term 80-year-old who openly admits he signed on with the Democrats out of political expediency.

Specter has also been put on the spot by Obama's nomination last week of Solicitor General Elena Kagan to the Supreme Court. Specter, considered a moderate, voted against Kagan last year when she was up for confirmation for solicitor general and he was still a Republican. He has said he won't decide how to vote on her high-court nomination until after her hearings before the Senate Judiciary Committee, of which he is a member.

The two-term congressman, no firebrand on the campaign trail, is seen as having benefited from the guidance of legendary adman Neil Oxman of Philadelphia. Oxman's Campaign Group produced a recent ad that shows then-President George W. Bush supporting Specter during his last re-election campaign, along with footage of the senator explaining his party switch as a way to avoid a primary.

The ad has been viewed as an effective counterpoint to one Specter began airing a week ago. In it, Obama is shown addressing a cheering crowd with Specter at his side. "I love you," Obama tells the crowd, "and I love Arlen Specter." 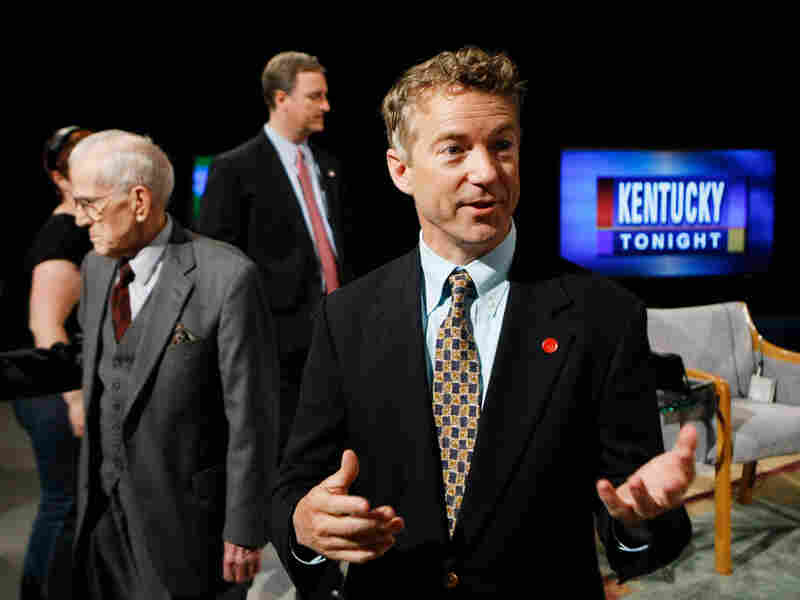 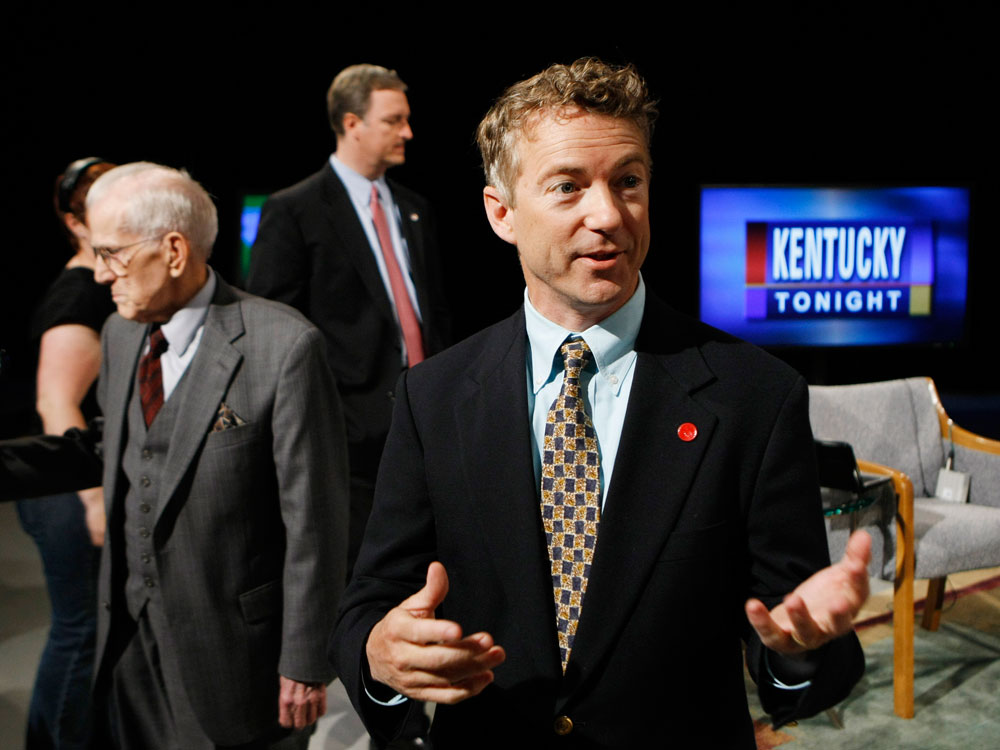 Republican Senate candidate Rand Paul awaits the beginning of a candidate forum in Lexington, Ky., on May 10.

The Republican primary in Kentucky between the former Democrat Grayson, 38, and Paul, 47, has been widely characterized as the first true test of Tea Party movement strength.

After all, Paul, an eye doctor, has pulled in the big Palin endorsement and has drawn on the movement's grass-roots network.

But the race seems just as much about McConnell, 68, and his endorsement of Grayson, as it is about Paul or the Tea Party.

"The Tea Party plays a big role, but people on the inside don't view Grayson as a true conservative," says Jack Richardson IV, a member of the state's GOP executive committee and a Louisville lawyer. "He couldn't establish his conservative bona fides."

To Republicans like Richardson, the former Jefferson County party chair, McConnell's endorsement of Grayson had a deja vu quality: The longtime Kentucky political powerbroker also strongly backed then-Republican Specter in Pennsylvania when he was challenged by the conservative Toomey in 2004. And last year, he endorsed Florida Gov. Charlie Crist for U.S. Senate. Crist has since lost his party's support and recently announced he'd run for senator as an independent. 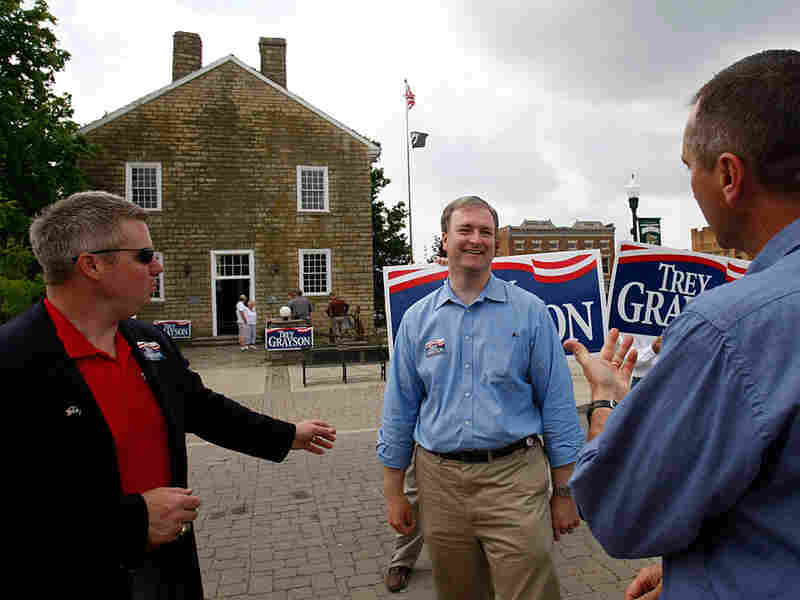 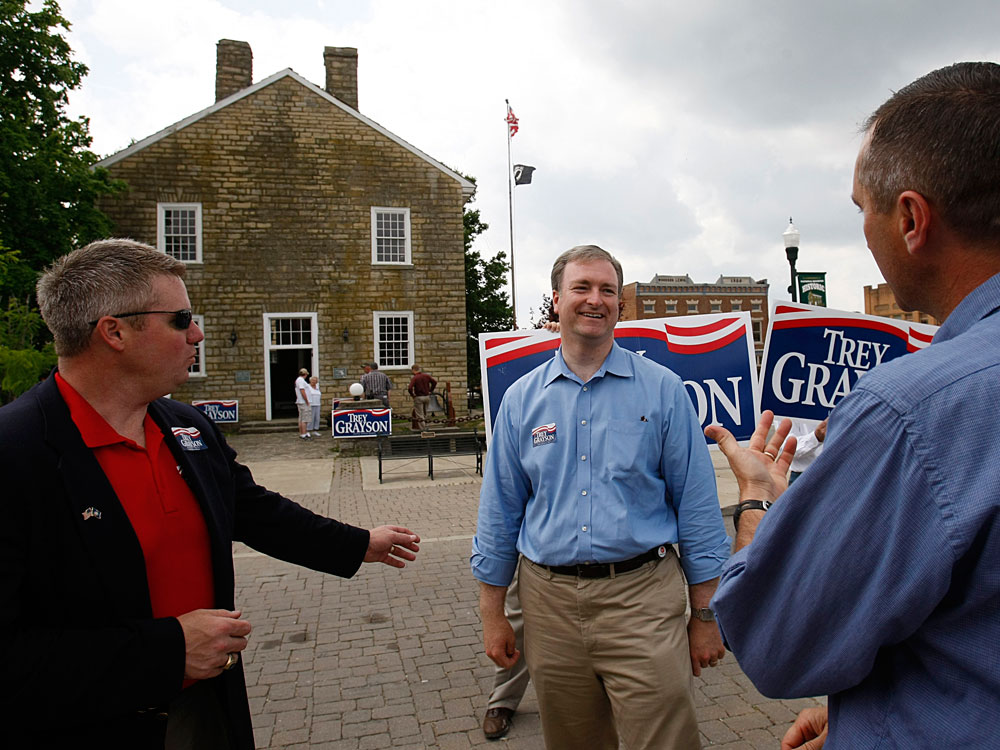 Republican Senate candidate Trey Grayson (center) talks to supporters during a campaign stop in Greensburg, Ky., on May 13.

Grayson's history as a Democrat -- he was a Bill Clinton delegate at the Democrats' 1992 presidential nominating convention -- has given party members pause.

"McConnell has been kingmaker to the wrong candidates," Richardson says.

Paul has continued to maintain a healthy lead in the polls. But what might have sealed it for him is a recent controversy involving influential Christian conservative leader James Dobson. Dobson says he was duped into endorsing Grayson after he was given incorrect information on Paul's position on abortion by a senior Kentucky Republican. Paul, like Grayson, opposes abortion rights.

Dobson, considered influential in the state, has since rescinded the endorsement, and is being featured in radio ads for Paul that are getting big play in the state.

Results in Kentucky are likely to reflect voter sentiment toward the Tea Party movement, McConnell's leadership and Dobson's pique.

"All of this stuff is layered," Coker says. "The Tea Party is influential, but they really haven't won anything yet." 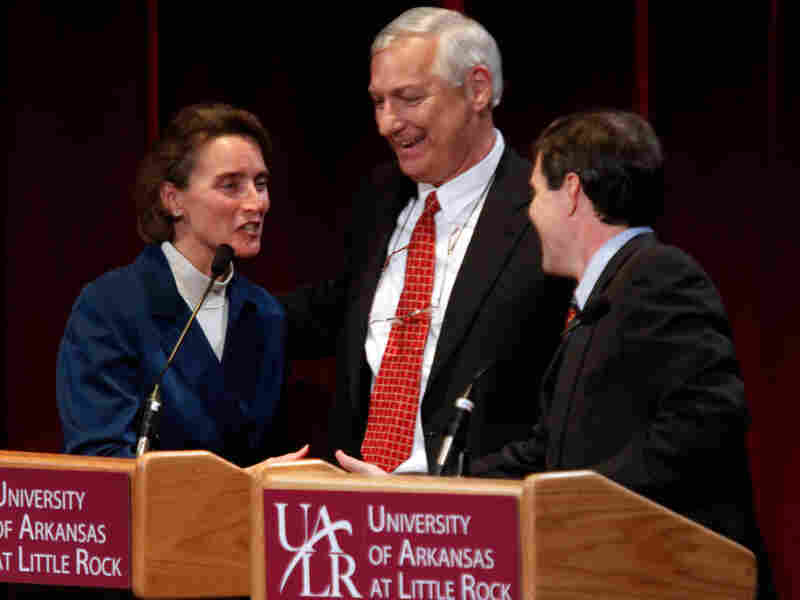 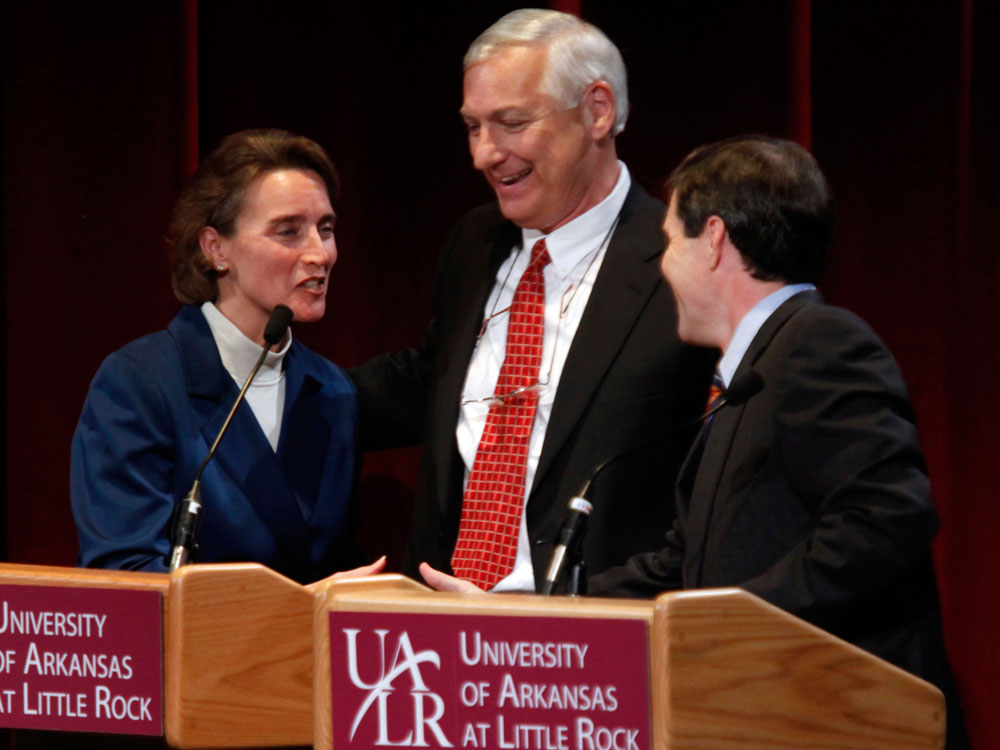 Unions -- including the Obama-friendly SEIU -- have pumped millions into Arkansas to take down Lincoln, 49, seen as unfriendly to organized labor for her support of NAFTA and her opposition to a proposed law that would allow unions to organize new units through a sign-up process, rather than a vote.

New SEIU President Mary Kay Henry told The Hill newspaper last week that the union would not back Lincoln if she wins the nomination over Halter, 49.

Battered by the onslaught, Lincoln has brought in former President Bill Clinton, a past Arkansas governor, to record two radio ads in which he defends her NAFTA vote and touts her hard work to "preserve our rural way of life."

But while Lincoln, who chairs the Senate Agriculture Committee, has maintained a comfortable lead over Halter in the polls, a third candidate, businessman D.C. Morrison, could pull enough votes to push the match into a runoff. National pollsters say that no matter who wins the Democratic nomination, it will be a tough road to victory over the eventual Republican nominee. Eight Republicans are vying for the nomination, including Rep. John Boozman, the frontrunner.

Parry, the University of Arkansas professor and poll director, says that the nationalization of the primary has caused Lincoln to struggle. "Her approval ratings are low, and they've been depressed by national money and influence," Parry says.

"But those numbers, I would argue, may not say a lot about the status of Democrats in Arkansas because just about everybody hates what's happening in Washington," she says. "And she's just the one who drew the short straw and is up for re-election this year."

Parry is among those who say they believe that, if Lincoln prevails in the primary or runoff, her chances in the fall are actually better than predicted now. The polls will narrow after the primary, Parry says, and "Arkansas is still so thoroughly Democratic below the presidential line." Obama captured just 39 percent of the vote in 2008, but the top state offices are held by Democrats.

Coker says he's been puzzled by the attacks from the left on Lincoln, who opposed a public insurance option during the health care debate. "From where I'm sitting, she stayed pretty loyal to Obama," he said.

"But the big picture here," he says, "is that voters in both parties are not being shy about kicking their incumbents out."

A previous version of this story incorrectly stated that the Kentucky GOP primary is open to any registered voter, not just Republicans.