Accessibility links
Homicide Blog Shows Who Victims Really Are With few exceptions, most of the violent deaths in the Los Angeles area simply become statistics. The Los Angeles Times set out to dig beneath those numbers, and, as the blog's founding editor sees it, discovered a disturbing truth about murder in America. 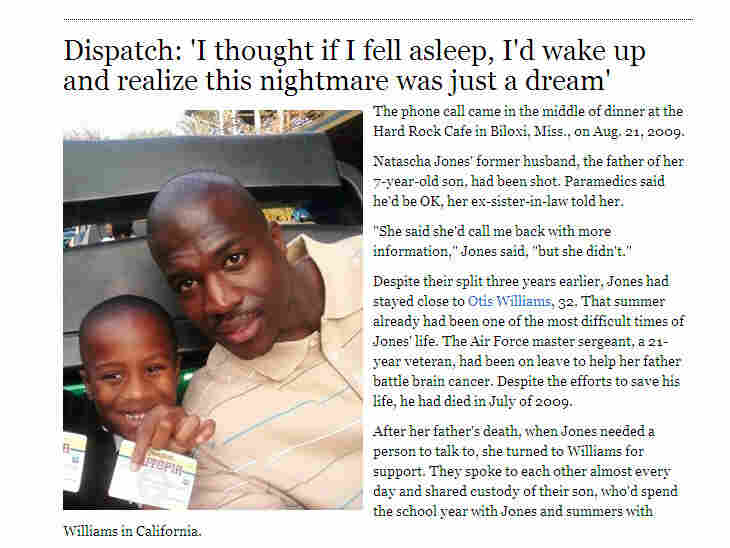 An entry from The Homicide Report. hide caption 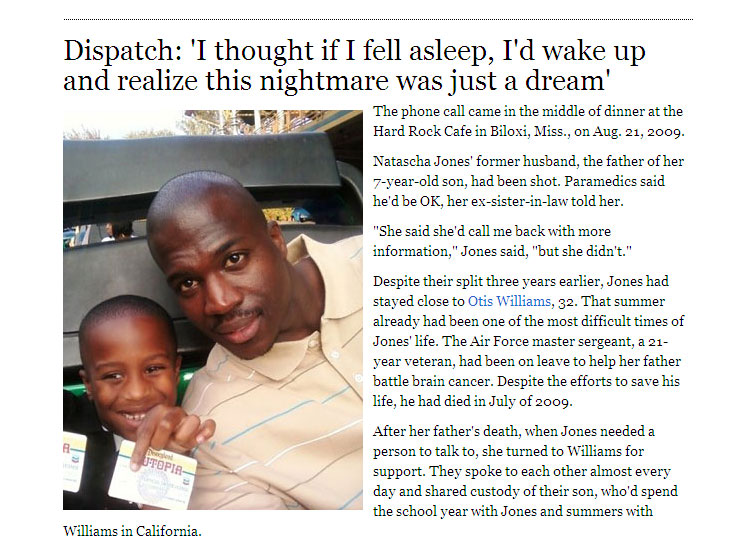 An entry from The Homicide Report.

Take A Look At The Homicide Report

But in 2007, the Los Angeles Times set out to dig beneath those numbers and tell the story of each and every person on a blog called The Homicide Report.

Each week, a blogger checks in with several city and county agencies -- the LAPD, the county coroner, whoever can tell the stories of who died and why.

"Brandon Garrido, a 16-year-old Latino, died Monday, May 10, on the 3200 block of East 1st Street in Boyle Heights," one entry begins. Another starts with "Marques McNeil, a 28-year-old black man, was shot and killed Sunday, May 9, on the corner of 78th Street and Avalon Boulevard in Florence."

The names go on and on and on. A photograph is attached to almost all of the entries.

"If you're in a smaller place, you know, there's a local paper and a homicide is big news. In L.A., it isn't always big news," says Megan Garvey, who's been running The Homicide Report for a more than a year.

"There are people who, if it wasn't for The Homicide Report, probably would never be acknowledged in print, whether that's online or in a newspaper," she says. "When Jill [Leovy] created this blog, I think that's part of what people really responded to."

'The Truth About Homicide'

Now a senior reporter at the L.A. Times, Jill Leovy started The Homicide Report in 2007 after noticing the huge disparity in the way murders were covered by the news media. The sensational stories, mostly the outliers and anomalies, got the most attention. But the majority of homicides were largely ignored.

"The first year I was in the Watts homicide unit, that unit had 60 murders that year," she tells NPR's Guy Raz. "I was shadowing the detectives, and we were running on murders every other day. Every morning they had CNN on, or something on, and it would have the latest installment of the Laci Peterson murder." The sensational case of a pregnant wife murdered by her husband enthralled the nation for months.

"The detectives in that unit were fascinated with it. Every day, we would have a moment of discussing the newest development in that case, and then they'd go on to do the 60 other murders that year -- and that is homicide in America.

"The money needs to go to black male argument violence," she continues. "Anything else … you're dealing with the margins of the problem, statistically, and it's not right."

Nobody Deserves To Be Murdered

Leovy wants to give a name, an identity and a story to every person who was murdered in L.A. County. She wants society to get away from "medieval notions" of deserving or not deserving to be killed.

"I don't care if they're the worst thug in the world," she says, adding, "some of these guys are really, really deeply, criminally involved characters. Many of them have killed people."

"You don't have it coming in a gang shooting," she says, "you need to be arrested and prosecuted.

"A lot of the money we spend is based on the presumption that the victims are guilty in some ways," Leovy explains. She hears all the time how terrible it is that young men are killing each other, how they need to shape up. She argues the discussion needs to be reframed.

"When we talked about domestic violence, we never talked about how these women were so delinquent and terrible and they needed to get their heads together and be taught right. We talked about protecting them from people who are trying to hurt them. We don't talk about men that way."

Leovy acknowledges that murder rates are way down in recent years, but says it's never been about that.

"The real homicide problem is not the numbers that everybody focuses on, it's the disproportion."

The Victim Almost Nobody Cared About

It seems easy for all the names on The Homicide Report to blur into a crowd of faceless victims for a reporter. Leovy says that's not so.

While on the beat at The Homicide Report, Leovy says, she was always waiting to find the one guy who was so bad, so despised, that nobody cared about him. One day she thought she'd finally found him: schizophrenic, in his 40s, a black man living in a very bad part of town.

"I think he was homeless, and he was nothing but trouble for everybody in his life," she recalls. Even his mother's grief was unconvincing.

"She kind of worked me over for favors, and I thought, 'This is it, I finally found the guy who nobody cared about."

But a week later, Leovy got a call from one of his sisters, despondent over the death of her troubled, homeless, violent brother.