Accessibility links
The Rolling Stones' Mick Jagger: Old 'Exile,' New Lyrics For the re-release of Exile on Main Street, The Rolling Stones went to the archive and searched through a trove of old tracks and outtakes. Some of the songs didn't even have lyrics, which allowed Mick Jagger to fashion new songs out of 40-year-old tunes. 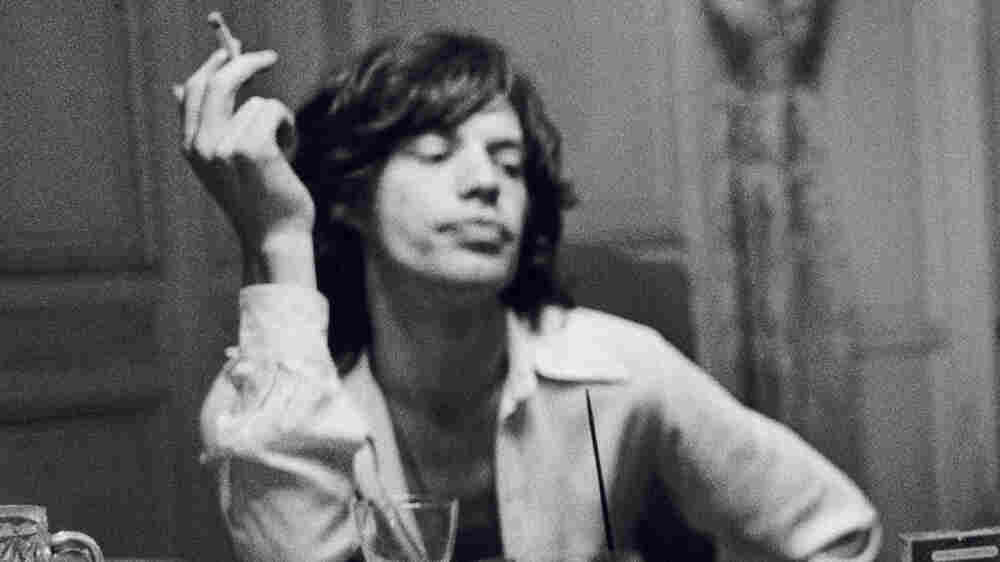 Mick Jagger says he can only write words from today's experience, but still captures the original tone on these old tunes with new lyrics. Dominique Tarl hide caption

The "exile" began in 1971, when The Rolling Stones' members owed more taxes than they could pay in England, so they picked up and left the country. Of course, it was The Rolling Stones, so that meant quite a luxurious lifestyle. In the basement of a sprawling mansion in the south of France, the band recorded Exile on Main Street.

Upstairs, as legend has it, was a constant party.

"Decadent, degenerate behavior all around," Mick Jagger says. "The south of France is pretty much known for that. Still goes on."

But as Keith Richards said Monday, they didn't do too much partying themselves.

"People didn't come down to the basement much. I don't think people found the basement very interesting," Jagger says. "It was rather damp and unpleasant. It wasn't a peanut gallery kind of studio -- there was nowhere to see from. There wasn't a control room with nice glass and lots of soft drinks. If people came down, they'd stay a couple minutes and go, 'Euh.' "

Jagger has been looking and listening back to the songs recorded during that chaotic summer. For the new re-release of Exile, The Rolling Stones went to the archive and searched through a trove of old tracks and outtakes. Some of the songs didn't even have lyrics, which allowed Jagger to fashion new songs out of 40-year-old tunes.

"When I started looking at this unreleased material, like 'Plundered My Soul,' I was quite impressed by how together the band was on something that was actually an outtake. An outtake is quite often about the stuff you haven't used," Jagger says. "It's very unfinished; it's a bit slovenly. Though it was a relatively undisciplined bunch of sessions, when we actually got into the sessions, I think the playing was quite disciplined."

In reworking this old material, Jagger had to write completely new lyrics for "Following the River." The words are quite reflexive and even a bit elegiac.

"It's what they call in the business a 'kiss-off song,' " Jagger says. "It's a regretful goodbye. It's not a nasty goodbye. It's saying goodbye and knowing you're going to miss her."

But Morning Edition host Renee Montagne wonders if these lyrics are four decades' worth of emotions, or if Jagger would have written them in 1971.

"I can only write from today," Jagger says. "Having said that, it's not that much different in tone from 'Angie' in a way, which is another kiss-off song. And until we started talking about this just now, I never thought of comparing them."

As mentioned above, The Rolling Stones' members were avoiding tax problems in Britain, which is why they "exiled" to the south of France. But did they really feel like they were in exile?

"I think so, yeah. It was a bit of a wrench to give up our home lives in England," Jagger says. "At the time, it was a bit of a laugh for the first few months. After a while, you realize that from a comfortable English life, you've moved into a different kind of life. I mean, musicians of every stripe, they tend to be cosmopolitan kind of people. Perhaps musicians were the first cosmopolitan people. In the 18th century, they would move where the patronage was. In that way, it wasn't a satch of wrenches it might be for some other people."

But The Rolling Stones adjusted to life in France anyway. In the new liner notes to Exile on Main Street, guitarist Mick Taylor writes, "I'm not having any problem with the language here, because I don't speak French." Jagger then mentions what Bill Wyman says in the documentary -- that the band was in the part of France where people went specifically for its food, yet he can't find his favorite tea bag.

In working on the reissue, Jagger spent half a year digging through that creative period of his life. Jagger writes in the liner notes that this album includes songs "you probably have second thoughts about," but was glad he did.

"Would I have changed Exile on Main Street if I could? I easily could have. This is a good opportunity," Jagger says, laughing. "No, I just wanted to add to it. I was asked by the record company if there was anything else of interest. I was trying to find things that stood up, and I think we managed to find things that did hold up, things that gave it extra depth. I was quite pleased with them."