Accessibility links
Bobby Sanabria's Latin Jazz Hybrid Percussionist Bobby Sanabria grew up in the musical melting pot of the South Bronx in New York City. Now, as the leader of a big band, it's no wonder that his brand of Latin jazz mirrors a panoply of Afro-Western styles from all over the Americas. 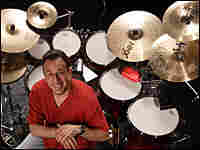 Percussionist Bobby Sanabria's new CD reflects the musical diversity of the South Bronx where he grew up. hide caption

My thing has always been to show the commonalities we have ... It's not strange that I'm a big fan of maestro Tito Puente, but I'm also a big fan of Frank Zappa.

Growing up in the South Bronx, Bobby Sanabria was exposed to a wide range of music: Latin, Afro-Cuban, blues, jazz, funk, rock. He became a fan of Tito Puente, Dizzy Gillespie, Buddy Rich, James Brown and Mario Bauzá, among others.

Later, Sanabria performed alongside many of those legendary musicians. Now his name is included in the short list of renowned drummers and percussionists, and he's determined to make sure that the musical mélange of his past continues in the future.

His ensemble, which just released a new CD called Big Band Urban Folktales, brings together musicians from ages 18 to nearly 80. Together they forge a fresh, youthful style with deep respect for the old school.

"I was very fortunate that when I came on the scene, I would ... usually be the youngest person in these ensembles," Sanabria says. "One thing I always have cherished is respect for the history of the music, and respect for elders in the music."

When Sanabria speaks of "the music," he refers to many Afro-Western musical hybrids at once. He demonstrates how a certain rhythmic mantra – the so-called 3-2 clave pattern – is the backbone to Afro-Caribbean music, and underpins styles as diverse as funk or reggaeton.

"My thing has always been to show the commonalities we have," Sanabria says. "We have many more things in common than differences. It's not strange that I'm a big fan of maestro Tito Puente, but I'm also a big fan of Frank Zappa."

A Zappa composition called "The Grand Wazoo" appears on Big Band Urban Folktales. Years after encountering it in college, Sanabria had the tune rearranged for his large Latin jazz ensemble.

"I said to myself, 'I love that song,'" Sanabria says. "'One day I'm going to re-record it, but add the elements that Frank Zappa only hinted at in the original arrangement.' And those are the elements, the rhythmic elements from my culture: Afro-Cuban, Afro-Caribbean culture."

Sanabria pinpoints the roots of his all-encompassing aesthetic in his father, who, he says, listened to anything and everything.

"He used to sit in his La-Z-Boy chair, smoke a cigar, drink some Schaefer beer after he came home from work, and listen to all these different styles of music," Sanabria says.

He also credits Max Salazar, former host of The Musician's Show on New York's WKCR-FM, for exposing him to many Afro-Latin music traditions indigenous to his native city.

Sanabria continues to represent his hometown. In 2006, he was inducted into the Bronx Walk of Fame with a plaque on East 153rd Street.

"Somebody e-mailed me from Canada the other day saying, 'Where's your street sign? I want to steal it,'" Sanabria says.

These days, Sanabria spends much of his time teaching at the Manhattan School of Music and the New School. But on stage, he continues to present his blend of musical traditions with what he calls "aché," or positive energy.

"It's cool, it's intelligent, it's sacred, it's profane, it's all of that and a bag of chips, as we would say in the Bronx," he says.