Accessibility links
Tradition with a Twist at Chinese Weddings From singers dressed as Red Guards to underwater ring ceremonies, young brides and grooms in China are electing to fuse old and new on their big day.

Listen
Tradition with a Twist at Chinese Weddings 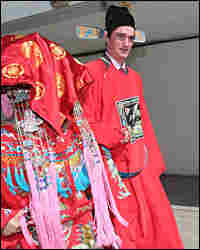 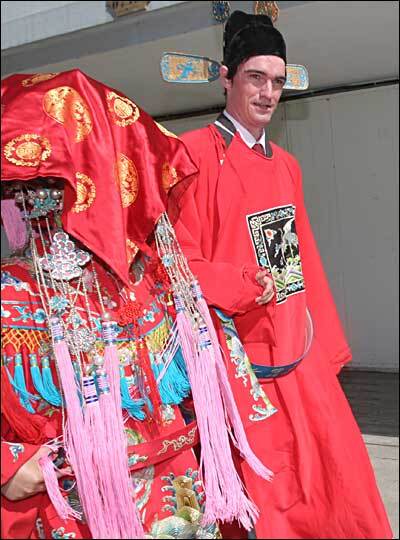 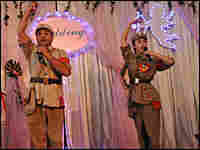 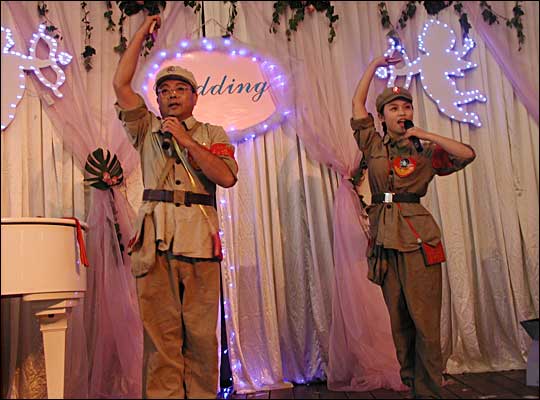 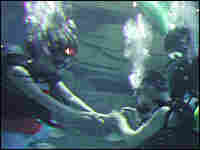 The families of six couples watched from outside an aquarium as they exchanged rings underwater. Joy Ma hide caption 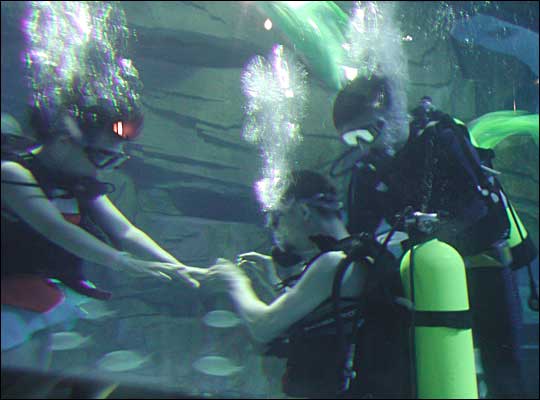 The families of six couples watched from outside an aquarium as they exchanged rings underwater.

The children of China's postwar baby boomers are getting married, and as a result, China has seen a surge in marriages since 2005. While most Chinese people still hold traditional weddings, others are eager to do something different.

My wedding was a fusion of Chinese and American culture. I wore a Chinese wedding dress and a veil over a traditional hat decorated with phoenix patterns. Later, I changed into a white wedding gown for a sort of Western ceremony.

We lit candles, and kowtowed to my parents and my American fiancé's parents. We formally started to call our in-laws "Mom" and "Dad" and then ... we kissed. Kissing at a wedding is not as strange as it used to be to Chinese people, but some guests were still embarrassed and even a bit shocked.

It is traditional at Chinese weddings to set off fireworks in hopes that the noise will drive away evil spirits. We wanted to update the tradition and used propylene cannons to make a louder noise.

Taking highly posed wedding photos is another popular custom, adopted from Taiwan and taken at least one month before the wedding — where the photos will be displayed. My friend's fiancé was browsing through photo albums in a studio before his wedding.

"I opened up the book, and they had sort of the pages with a watermark on them that I immediately recognized as the CD cover and lyrics from a Prince album," he said. "But I'm not really quite sure I want to celebrate my love and my wedding with the lyrics to "Darling Nikki" scrolling in the background."

The families of the couple often have more say than the couple does about how the wedding is planned.

Law student Gao Simin shopped for a Western-style dress in a Beijing wedding supply store. She wanted a sleeveless white gown, but her family preferred that she wear a red one with long sleeves to represent a long-lasting union in keeping with Chinese tradition.

"To some extent, a wedding is not like what people think — a completion of two peoples' love," Gao said. "It is mostly a coordination between two or three generations. I don't feel it is a conflict for me, though. I respect my family's wishes and try my best to compromise."

Some couples try to spice things up with themed weddings. Office clerk Su Wenjuan hired a group to perform songs and dances from the Cultural Revolution for the guests at her wedding.

As a song dedicated to Chairman Mao played, actors dressed as Red Guards performed a dance to declare their loyalty to Mao and bless the newlyweds.

"Down with landlord Wang," they screamed. The actors also re-enacted the class struggles and picked out audience members to play the evil landlord and kind peasant. The guests laughed, many enjoying familiar scenes from their youth.

Most of them were Red Guards themselves, but they seem to have forgotten the beating, torturing and killing the Red Guards did during the Cultural Revolution.

A few days later, six couples in Shenyang, in Northeastern China, held their weddings in an aquarium instead of a hotel. After being kissed by a barking sea lion, the couples dove into a big tank where they exchanged rings.

Some could not swim, and two instructors dragged them to the bottom of the tank. The couples bowed to their families, who were watching outside the tank and exchanged rings with awkward underwater movements.

Most of them will also have traditional wedding ceremonies with feasts, gifts of money in red envelopes and other fancy traditions, but they are having a great time.

"It is so exciting," said Yang Yang, one of the grooms. "I feel that our love is so pure in the water."

In China, young people's weddings are very much influenced by their parents' experience. My parents had a wedding-less marriage in the 1970s. Instead of a ceremony, they registered at a government office and bowed to a big picture of Mao. The only gifts were seven or eight copies of Mao's little Red Book.

My mom noticed the contrast and said, "To some extent, my daughter's wedding feels like making spiritual amends for me and my husband."

When I heard that, it made all the efforts and even the annoyances of preparing my wedding worthwhile.

Joy Ma is an assistant at NPR's Beijing Bureau.