Accessibility links
Corporate Bucks Increasingly Behind 'Citizens' Initiatives In California California voters have used ballot initiatives to rewrite the laws on everything from taxes to medical marijuana. But increasingly, large corporations are behind the initiatives. The state's largest for-profit electric company and a major auto insurer have poured millions into questions on the ballot this June. 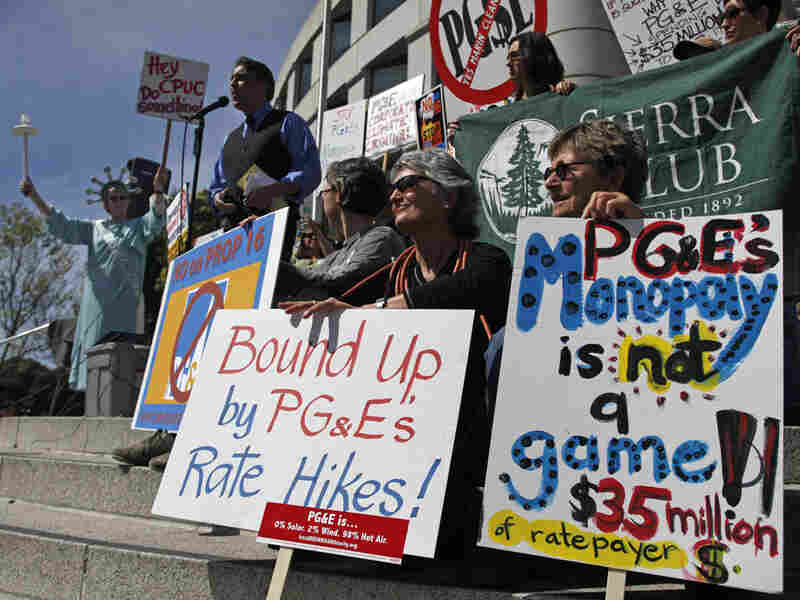 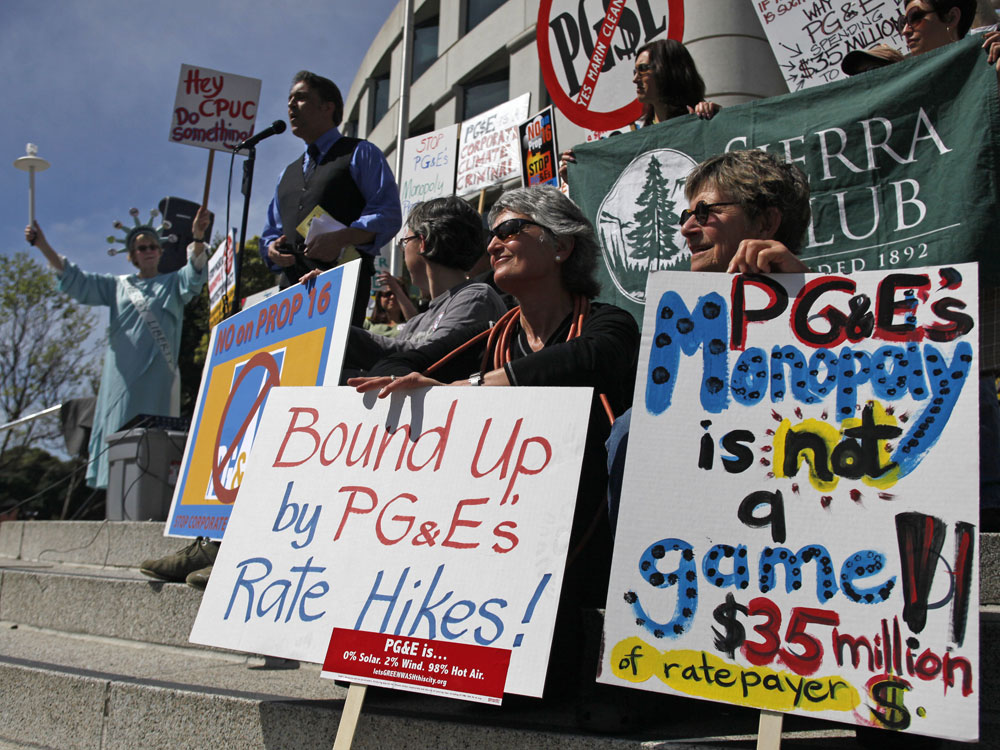 Some of the most closely watched contests in California's June primary election are for ballot initiatives. In the past, voters have used them to rewrite the laws on everything from taxes to medical marijuana to raising chickens. But increasingly, these "citizens initiatives" are being sponsored by corporations.

Take Proposition 16, for example. The initiative, which proponents call the "Taxpayer's Right to Vote Act," would require a city or county that wants to start a municipal utility or expand an existing one to get approval from two-thirds of its voters. The backer of all this extra democracy is Pacific Gas and Electric, California's largest private, for-profit electric company.

"Prop 16 puts the power back in the hands of the people," says Robin Swanson, spokeswoman for the "Yes on 16" campaign. Pacific Gas and Electric, she says, isn't afraid of competition from publicly owned power providers.

"If our opponents can provide cheaper, greener, better electric service, then they shouldn't be afraid to go to the people and sell it to them," she says.

Except those municipal power providers are forbidden by law from spending a dime on electioneering. PG&E, on the other hand, has already put about $44 million into the campaign for Proposition 16.

Jerry Geesman, a spokesman for the "no" campaign and a former member of the California Energy Commission, says that PG&E is breaking new -- and dangerous -- ground with the initiative.

"This is an effort to lock into the state constitution a perpetual monopoly," he says. "That's never been done before."

Proposition 16 isn't the only measure on the June ballot that's financed by a large corporation.

Mercury Insurance is the money behind Proposition 17, a measure that would allow drivers to keep the "loyalty discount" from their insurance companies even if they disloyally opt to buy insurance from a different provider.

Mercury Insurance has poured nearly $16 million into the campaign. But the Alliance of Insurance Agents and Producers also supports the measure.

"We love this initiative," says Mike D'Arelli, executive director of the group.

The reason, he says, is because it creates competition between companies.

"And as independent agents, we work with consumers to shop for the best deal," D'Arelli says. "And we think when there's more competition between insurance companies ... it's going to lead to lower rates."

But opponents of Proposition 17 say the measure is really an excuse to raise rates on drivers who've let their insurance lapse.

Jamie Court, the head of Consumer Watch, says, "The people who are most likely to be hit are college students, military personnel stationed domestically on a base where they don't need a car -- anyone who decides the economy is just too tough and they're just going to put their car in the garage. When they come back into the market, they're going to be facing surcharges of up to 70 percent in many cases."

'Money Does Not Buy Victory'

There are a couple of reasons that the initiative process is increasingly dominated by special interests. First, it costs at least $1 million just to gather enough signatures to qualify for the ballot. But money isn't everything, cautions conservative political consultant Joel Fox.

"If you have the money, you're almost guaranteed to qualify a measure for the ballot," says Fox. "But you are not guaranteed to pass the measure. Money does not buy victory."

But for corporations, it's worth rolling the dice, says political analyst Sherry Bebitch Jeffe.

"You might as well put the money into the initiative process [and] get exactly what you want on the ballot," she says, "as opposed to investing in a legislator who might go off the reservation, and [then] you will not have control over what that policy looks like."

That philosophy is behind a measure headed for the November ballot that would suspend California's landmark clean air law.

Major funding for it has been provided by oil companies.