Accessibility links
Coming Attractions: Summer Of Combative Primaries Tuesday's big primaries are over, but in just a few weeks, what promises to be a long summer of combative and telling Senate primary contests begins in earnest. Here's what to look for in California, Nevada, Colorado and Arizona. 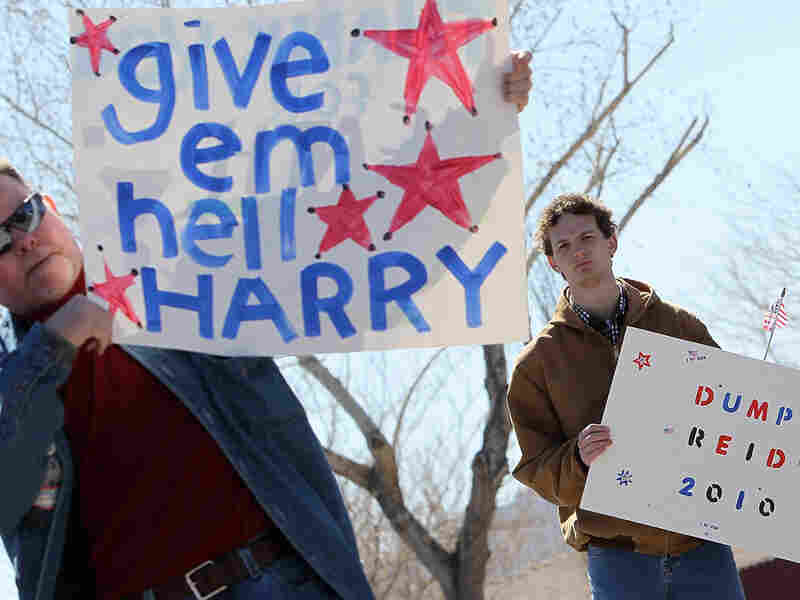 Supporters and opponents of U.S. Senate Majority Leader Harry Reid jockey for position outside an April campaign event in Fernley, Nev. With a slew of combative primary races, the summer is shaping up to be a hot one on the political scene. Justin Sullivan/Getty Images hide caption 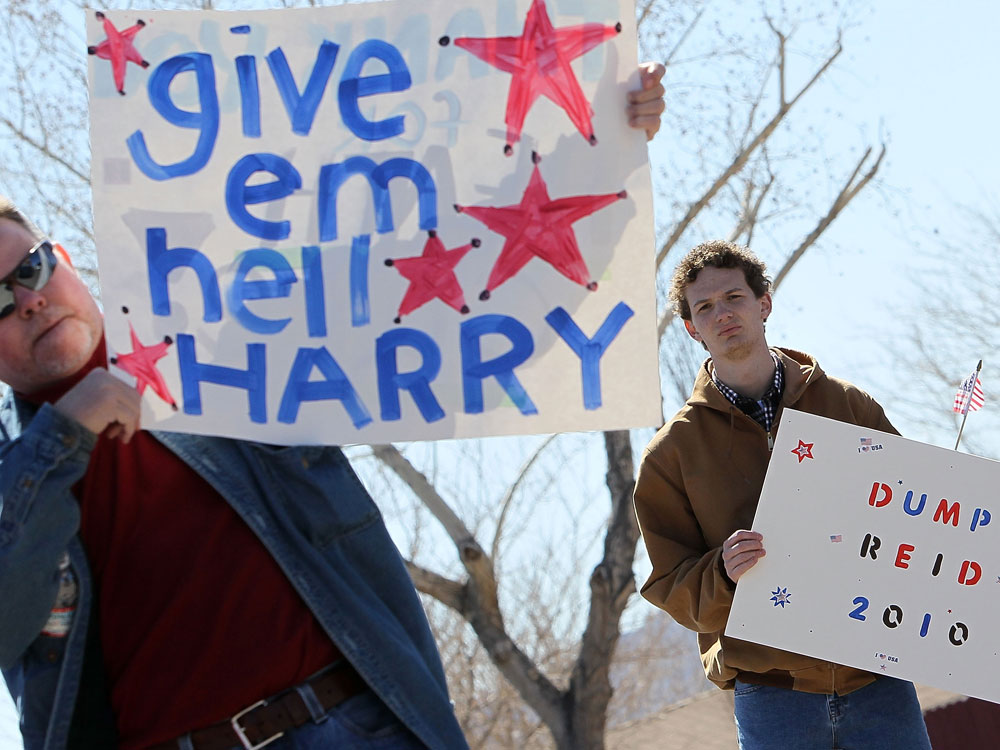 Supporters and opponents of U.S. Senate Majority Leader Harry Reid jockey for position outside an April campaign event in Fernley, Nev. With a slew of combative primary races, the summer is shaping up to be a hot one on the political scene.

Tuesday's primary races stoked the flames of what is shaping up to be a very hot spring and summer on the U.S. political scene.

And much more drama awaits. In just a few weeks, what promises to be a long summer of equally combative and telling Senate primary contests -- including a roller-coaster GOP battle to take on Senate Majority Leader Harry Reid in Nevada -- begins in earnest.

On the line in the hot-month primaries will be the 23-year Senate career of Republican John McCain of Arizona, the GOP's 2008 presidential nominee. And the 15-month tenure of Democratic Sen. Michael Bennet of Colorado, the Denver school superintendent appointed last year to serve out former Sen. Ken Salazar's unexpired term.

In addition, a closely watched clash of potential GOP kingmakers has been developing in both California and Colorado: Sarah Palin, McCain's 2008 running mate, and Sen. Jim DeMint of South Carolina, an emerging right-wing force, have backed different candidates in those states' Republican primaries.

Count those in the Tea Party movement confused.

These on-deck races present unique circumstances, and their own compelling story lines, say political experts such as Jon Ralston of Las Vegas and Gary C. Jacobson of the University of California, San Diego. Scouring Tuesday's results for clues as to how the coming big primaries may play out, they say, may be a fool's errand.

"I always wonder how you can translate results from one place to another, and especially to a place as anomalous as Nevada," says Ralston, a Nevada political columnist and blogger.

Says California political scientist Jacobson: "There's not the upsurge of populist anger here as in some other states, and the Tea Party is not playing here.

"The big problem here," he says, "is the state budget, and our own divided government."

So, whether the summer primaries in 29 states end up reinforcing larger national themes, or more simply reflect the particular local mindset, here's a look at some of the most-watched races on tap: 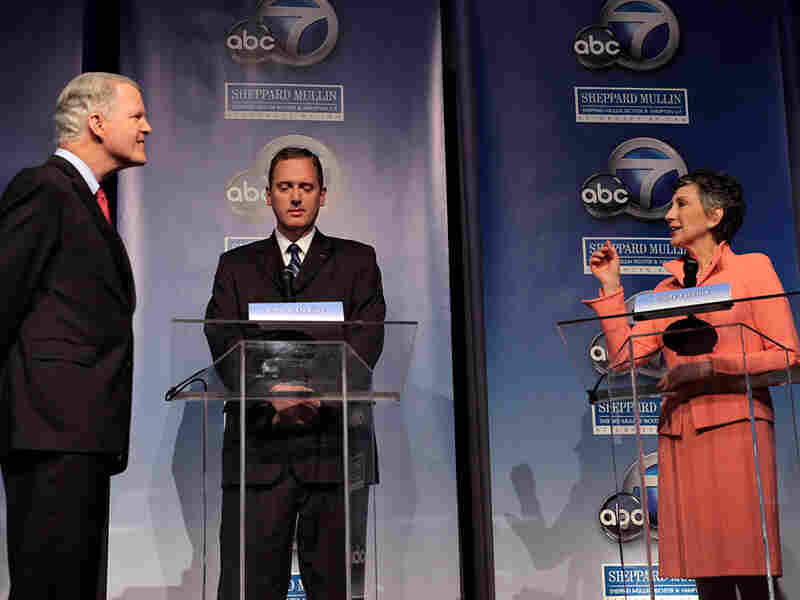 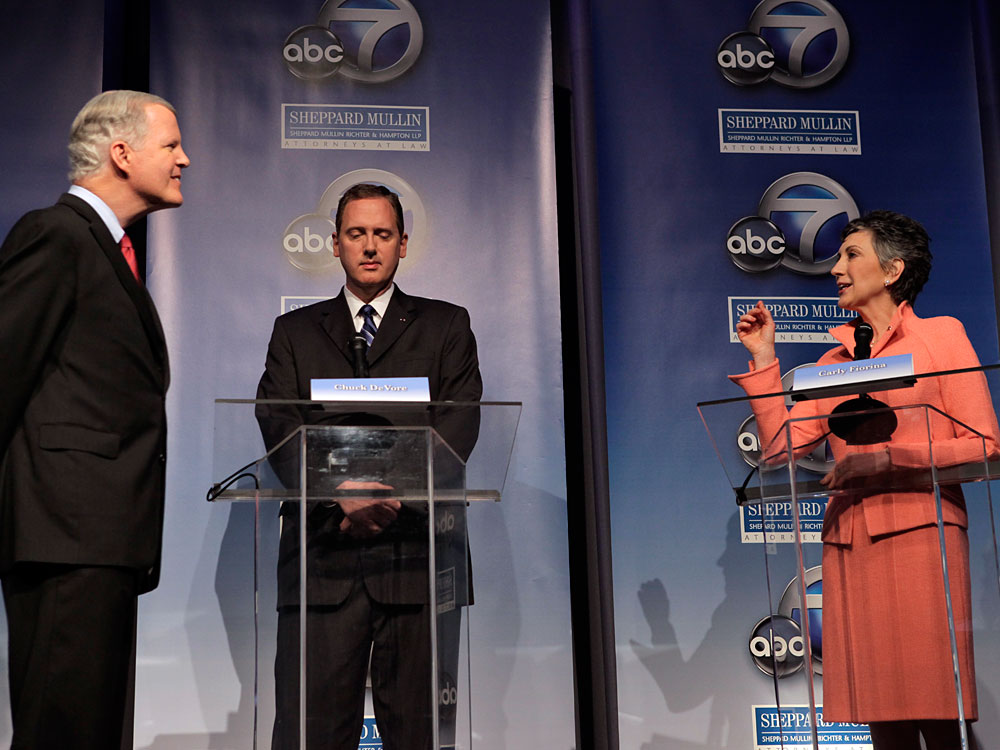 On June 8, conservatives may find they've outsmarted themselves in the race to take on incumbent Democratic Sen. Barbara Boxer in the fall.

But it's the race's most moderate contender, former U.S. Rep. Tom Campbell, who has been leading in the polls, and not uncomfortably, since he entered the race in January.

Recent poll averages show Campbell with the support of 35.4 percent of those surveyed, Fiorina with 24.9 percent and DeVore at 15.5 percent.

"DeVore and Fiorina are fighting over the conservative vote, and if only one were in the race, that candidate would be leading," Jacobson of UCSD says.

Democrats privately fret that Campbell, a former Stanford Law School professor who is considered socially moderate -- he opposed the state's anti-gay marriage initiative -- could mount the best challenge against Boxer. His appeal, they say, would be to moderate, fiscally conservative Democrats.

Palin surprised some Tea Party adherents by endorsing Fiorina. At an event last week in Washington, Palin defended her choice as "the real deal," saying she has the best chance of winning in "deep-blue California." DeMint picked Tea Party favorite DeVore as a "tested conservative."

Boxer, who has amassed a nearly $9 million war chest, is not considered invulnerable. But, as Palin noted, she's running in a blue state where Obama is still popular.

The Silver State GOP free-for-all on June 8 has something for everyone.

A bona fide Tea Party Express-endorsed candidate in former state Assemblywoman Sharron Angle. A son-of-a-legend contestant in Danny Tarkanian, a real estate businessman whose father is a well-known former college basketball coach. And, in Sue Lowden, an anointed powerhouse wounded by her suggestion that patients should trade chickens for medical care.

Though at least a dozen candidates had filed to run, it's come down to a three-way race for the chance to take on Reid, an extremely vulnerable Democratic incumbent who just happens to lead the U.S. Senate. And Angle has been surging -- up from a negligible showing in the polls to what the Las Vegas Sun characterized as a dead heat with Lowden -- since she got the Tea Party endorsement.

"She's very, very conservative," says Ralston, the political columnist. "She's the only one in the race who can say she is and back it up with a voting record."

The Republican Party establishment, aligned with Lowden, is increasingly alarmed -- especially because early voting in Nevada starts May 22 and continues through June 4. Angle has the momentum going into the weekend, and votes can be cast at grocery stores, malls, community centers, government buildings and libraries -- diluting the power of traditional Election Day get-out-the-vote efforts.

When Nevada politicos are asked what happened to Lowden, they point to her public comments last month advocating a barter system for medical care. She specifically suggested offering chickens to doctors.

Late-night comedian Jay Leno had a field day, as did the Democratic Senatorial Campaign Committee, which launched a "Chickens for Checkups" website with barter forms.

"A minor gaffe," Ralston says, "turned into an international incident."

He's among those who still consider Lowden a slight favorite, especially if turnout is higher than usual, but acknowledges that "once you start falling, it's hard to stop the falling."

Reid may be crossing his fingers for an Angle victory: Though most consider the senator "more gone than not," in the words of political analyst Stuart Rothenberg, Angle is not well-known in Las Vegas' Clark County, which has the state's richest lode of votes.

On Aug. 10, Ken Buck, the DeMint-endorsed Republican Weld County district attorney, will face off against the woman Palin is expected to endorse this weekend, former Lt. Gov. Jane Norton.

And on the Democratic side, Bennet is working to stave off a challenge from Andrew Romanoff, the former state House speaker who eked out a victory over Bennet in the March caucuses.

The race has been targeted by the National Republican Senatorial Committee as a potential Senate seat pickup, and party money has flowed to Norton, who was McCain's 2008 state chairwoman. But recent polls show that her lead over Buck and a third candidate in the race, Tom Wiens, has been eroding. And the Palin/DeMint/Tea Party drama has been playing out in recent days, as Norton and Buck traded barbs over Palin's planned visit.

Conservative blogger Erick Erickson suggested on his RedState site this week that the Republican establishment is "trying to send us back to 1992" -- the "Year of the Woman" in politics.

Norton, he says, is "most properly identified" as conservative, but not someone who would eschew solidarity "with the GOP establishment."

Public Policy Polling reported Tuesday that Buck's favorability ratings have been rising, and that polls show that he has pulled within 5 percentage points of Norton.

In the Democratic race, challenger Romanoff has had some difficulty defining his positions as any different from Bennet's. Indeed, state progressive leaders say the race, which had the potential for being disruptive, has been nothing of the sort.

Romanoff had been considered for the Senate appointment that went to Bennet. A new Public Policy poll shows him sliding in the polls and now trailing Bennet 46 percent to 31 percent.

On Aug. 24, McCain, the party's presidential pick just two years ago, will have to stave off a challenge from arch-conservative radio talker and former U.S. Rep. J.D. Hayworth.

The race has seen McCain tack right on immigration, border control, climate change and other issues where he was once considered a moderate voice but earned the scorn of the party's right flank.

And his shift -- including a recent staff shakeup -- seems to be working: Since March, McCain appears to have stalled his persistent slide in the polls and stabilized. Hayworth has been losing support and now trails by double digits, 48.3 percent to 34 percent, according to a poll average compiled by Pollster.com.

Last week, in an interview with Think Progress, Phoenix Mayor Phil Gordon, a McCain supporter, described Hayworth as "full of racism" and said he stands behind McCain despite his flip-flop on supporting the state's border fence.

McCain, who has fashioned himself as a crusader against government pork over the years, launched a new line of attack on Hayworth this week for voting for earmarks while he was in Congress.

It's been an ugly race, and one that has left many longtime McCain supporters shaking their heads. The primary is still three months away, but as of this week, the "Maverick" -- who has even attempted to disown that once-embraced moniker -- looks to be out of the woods for now.

TWO-WAY BLOG: With 'Tea Party Mandate,' Rand Paul Looks Ahead To General Election May 19, 2010
POLITICAL JUNKIE: Anti-Establishment Vote Hits Both Parties May 19, 2010
WATCHING WASHINGTON: A Specter Retrospective: Will The Senate Now Miss Its 'Great Survivor'? May 19, 2010