Accessibility links
Filling In The Blanks On Senate Hopefuls Paul, Sestak The race is on to define Pennsylvania Democrat Joe Sestak and Kentucky Republican Rand Paul, two previously little-known politicians who both toppled party-endorsed opponents and whose victories are being viewed as a window into the souls of the disgruntled American voter.

Filling In The Blanks On Senate Hopefuls Paul, Sestak

Filling In The Blanks On Senate Hopefuls Paul, Sestak 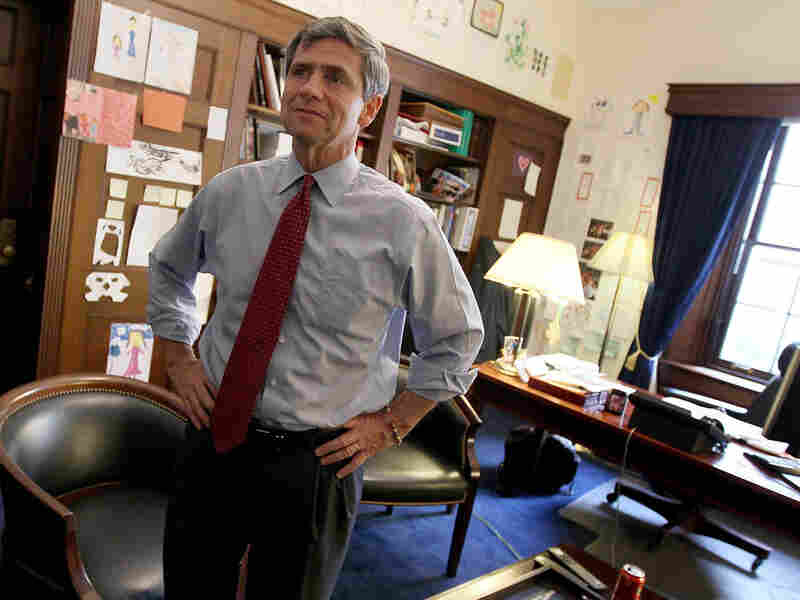 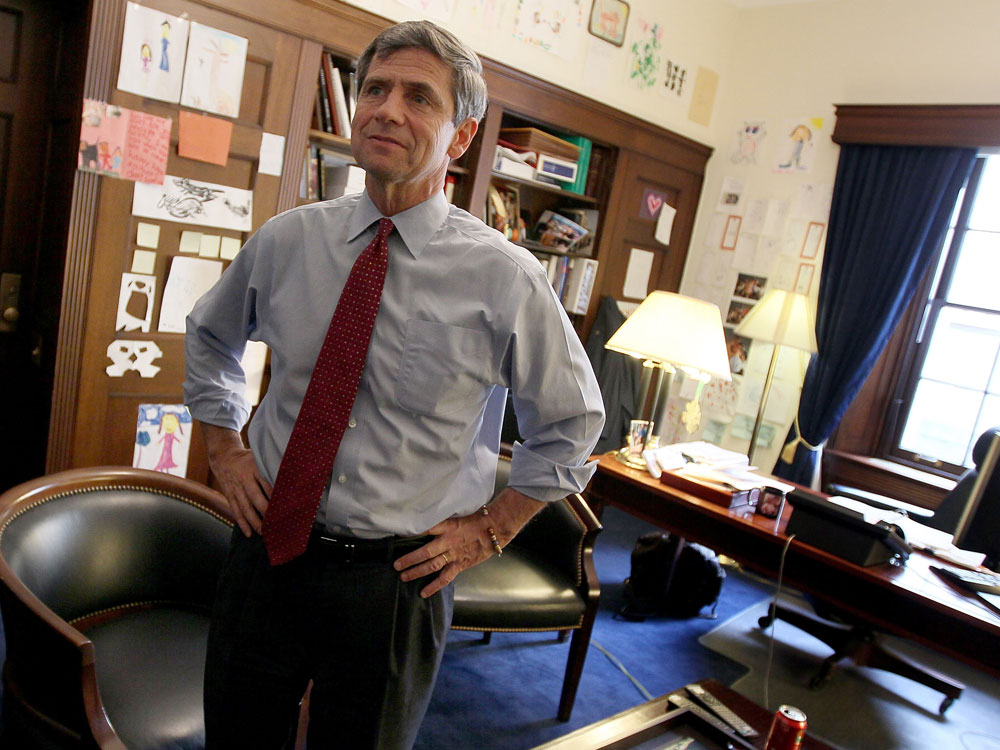 And now the race is on to define the previously little-known politicians, who both toppled party-endorsed opponents and whose victories are being viewed as a window into the souls of the disgruntled American voter.

Sestak, a two-term congressman, and Paul, son of libertarian favorite and one-time presidential candidate Rep. Ron Paul of Texas, have been making the media rounds, working their story lines and signaling themes they will take into their general election campaigns. 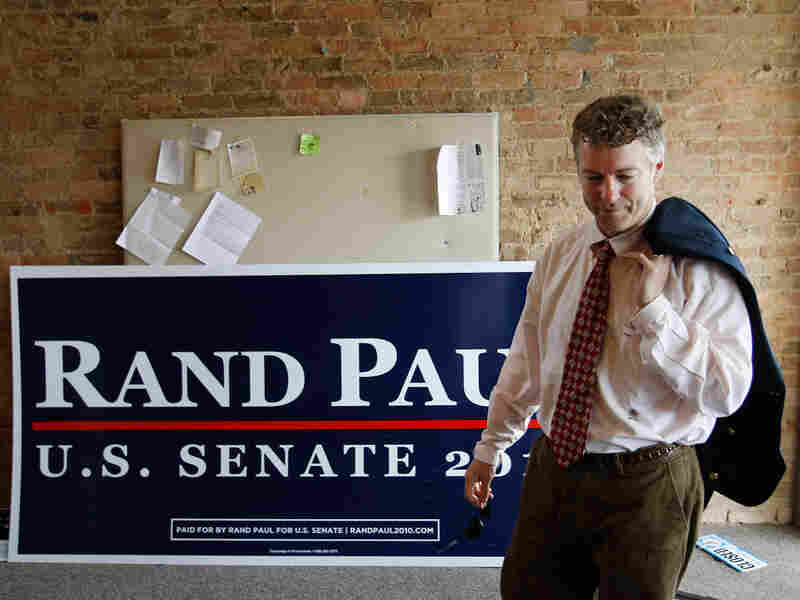 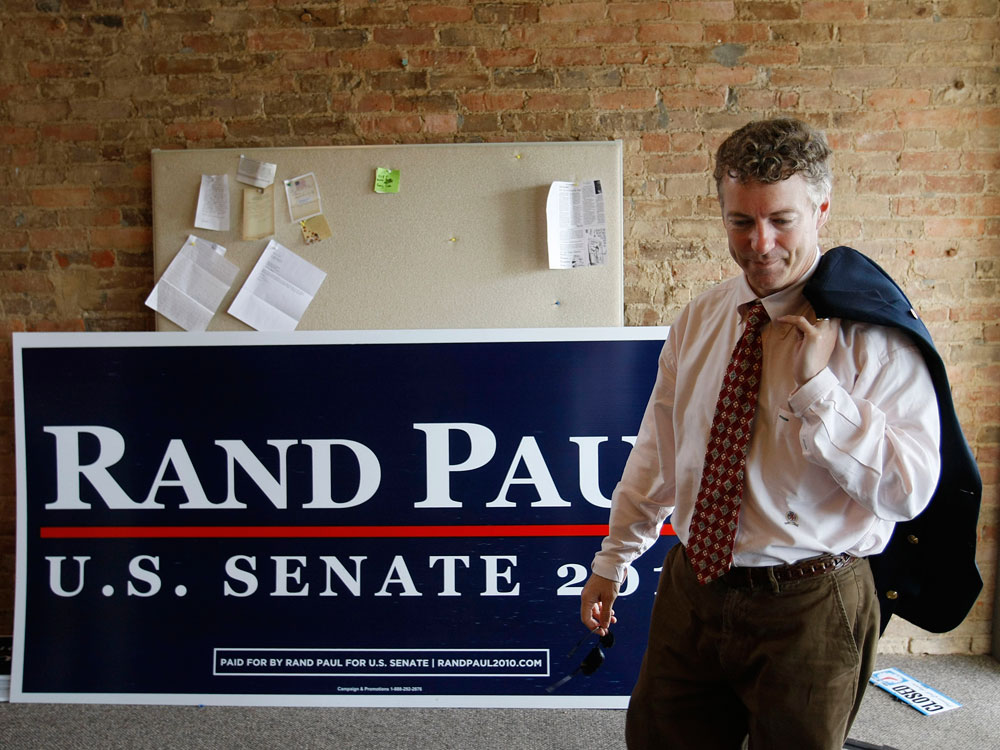 Initial volleys from their November opponents also make it clear that, despite their high-profile primary wins, the nominees still have big -- and expensive -- battles ahead in their quest for a desk in the Senate.

Democrats have tweaked Paul for holding his victory party at a country club, and they've launched an online ad portraying the nominee, an eye doctor, as a pseudo-libertarian interested in cutting government programs -- except the ones that benefit physicians. Paul was also taking heat Thursday for avoiding direct answers to questions about whether he would have voted for the 1964 Civil Rights Act. Paul told NPR he's against "institutional racism" and told MSNBC that the issue was a "red herring."

On Thursday, Paul issued a statement saying he would not support any effort to repeal the Civil Rights Act.

In Pennsylvania, GOP Senate nominee Pat Toomey, a former congressman who breezed to a win against a nominal candidate in Tuesday's Republican primary, characterized Sestak as a liberal with views that run to the left of "not only the consensus of Pennsylvania, but even to the left of the mainstream of the Democratic Party."

As all eyes turn to the November elections in those two states, here's a look at new nominees Paul and Sestak:

Politically, Sestak and Toomey -- who lost to Specter in a 2004 Republican Senate primary -- couldn't be more different. 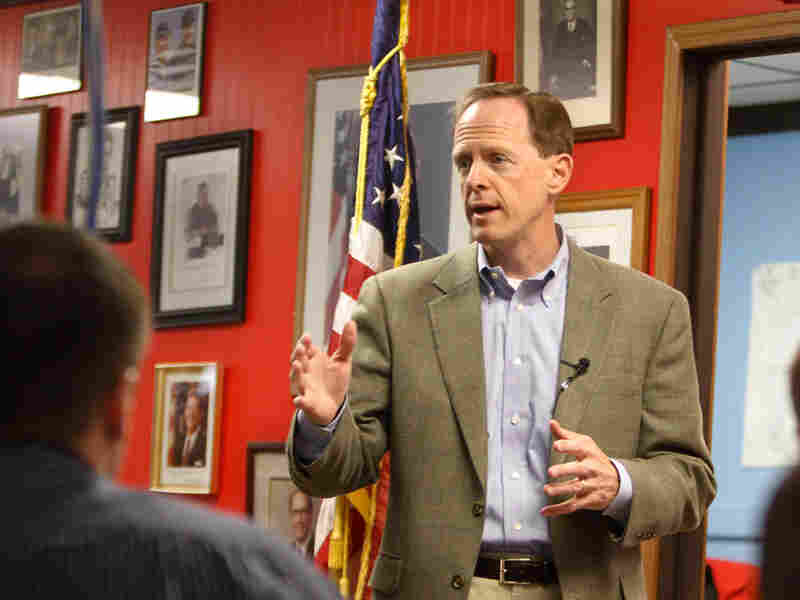 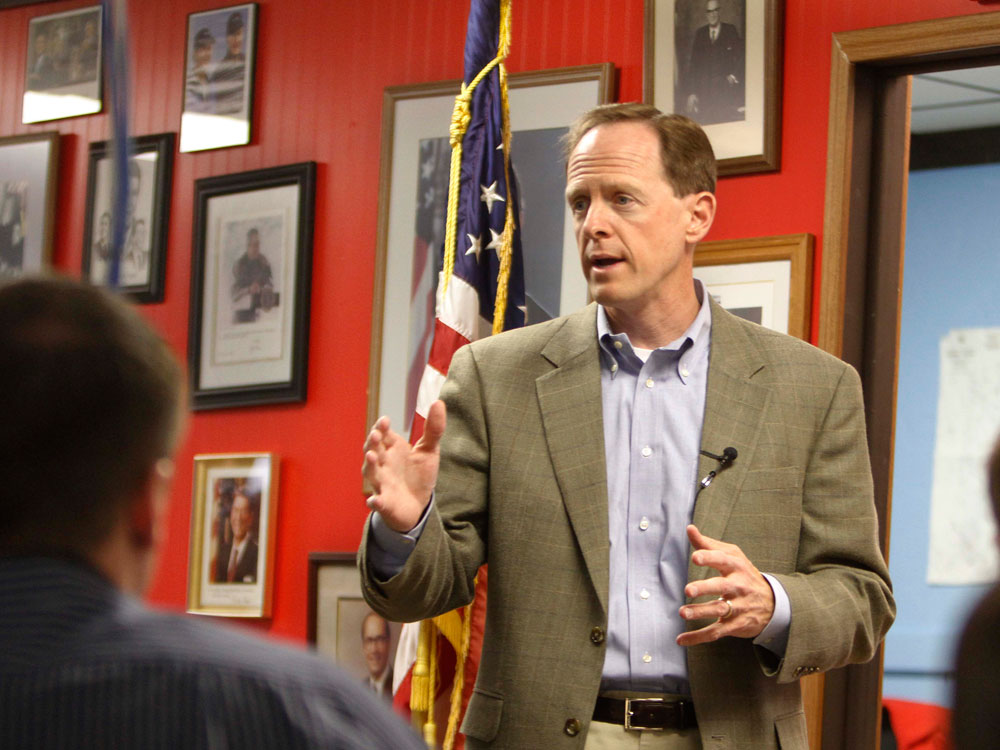 Pat Toomey, Republican hopeful for U.S. Senate, talks with supporters at the party office in Johnstown, Pa., on Tuesday.

Sestak, 58, supports abortion rights, stem-cell research, gay rights and most of the president's agenda, from the health care overhaul bill -- though Sestak says he wanted one with a public option -- to the bank bailout and comprehensive energy legislation.

He's a loyal supporter of labor and has earned an "F" grade from the National Rifle Association.

The 48-year-old Toomey? Plug in opposite positions, add a strong Wall Street deregulation/tax cut history -- he's a former head of the limited-government advocacy group Club for Growth -- and you'll have a pretty good picture.

But the two men, both of whom have promised a "clean" campaign, do have something in common: degrees from Harvard. In fact, Sestak has two.

After graduating second in his class from the Naval Academy in 1974, Sestak earned master's and doctoral degrees from Harvard in the 1980s. A career military man, he's a son of a World War II naval captain and is the highest-ranking former military officer ever elected to Congress.

During the Clinton administration, Sestak was the National Security Council's director for defense policy and worked on anti-terrorism efforts after the Sept. 11 attacks.

Following his retirement from the military, he toppled 10-term Republican incumbent Curt Weldon in the 2006 race to represent Pennsylvania's 7th Congressional District in suburban Philadelphia. In Congress, he supported increasing the minimum wage, expanding government health care coverage of children and raising standards for allowable car emissions, and opposed barring foreign abortion aid and the repeal of Washington gun laws. In 2007, he advocated bringing troops home from Iraq, but eventually voted for funding that kept them there.

The Almanac of American Politics says that on key votes, Sestak typically sides with liberals more than two-thirds of the time.

In an interview Wednesday with NPR's Michele Norris, however, Sestak said that in taking on Specter, "I stood up to my party." And he acknowledged that the White House had, indeed, encouraged him not to run against the incumbent senator.

But on primary night, Sestak said, the president called him with a congratulatory message and said, "I'm here to support you." The new nominee said he thanked the president but told him he would not come to the Senate as a "yes man."

In his NPR interview, Sestak hit themes that provided a preview of how he'll run against Toomey this fall: He repeatedly referred to Toomey as "Congressman Toomey," a Washington insider who spent time on Wall Street. He made frequent reference to Pennsylvania's "working families," as well as his own 31-year Navy career. And he provided a staunch defense of the recent health care overhaul legislation, noting that hundreds of Pennsylvanians are losing coverage every day.

When asked by Norris what he meant when, on the campaign trail, he referred to himself as a "real Democrat," Sestak said he was referring to someone who believes America's character is based on the "great alliance" of rugged individualism and common enterprise.

Sestak, who has earned a Capitol Hill reputation as a demanding boss who cycles through staff, downplayed characterizations of Tuesday's primary results as purely a reflection of anti-incumbent fervor. It's more, he told Norris, about Americans' loss of trust and faith in government.

Until he emerged as darling of the anti-big government Tea Party adherents, his experience had largely been confined to his medical office and to volunteer work in the vision care area.

But he began his small-government, low-tax advocacy in 1993 when he founded the Kentucky Taxpayers United watchdog group.

But it's a call that may bring some surprises. Paul has proposed eliminating the federal departments of Education, Energy and Commerce. He's called for audits of the Federal Reserve, supports a balanced federal budget, wants congressional term limits, and has advocated an electric fence for security on the nation's border with Mexico.

In an interview Wednesday with NPR's Robert Siegel, Paul downplayed the GOP rift in Kentucky, saying he has a "lot of things in common" with McConnell, and will join him at a unity rally this weekend.

Siegel pressed Paul on past comments he's made about government overreaching with laws such as the Civil Rights Act and the Americans with Disabilities Act.

"I think a lot of things could be handled locally," Paul said. "If you have a two-story office and you hire someone who is handicapped, it might be reasonable to let them have an office on the first floor rather than the government saying you have to have a $100,000 elevator."

He also proclaimed himself as opposing "institutionalized racism." 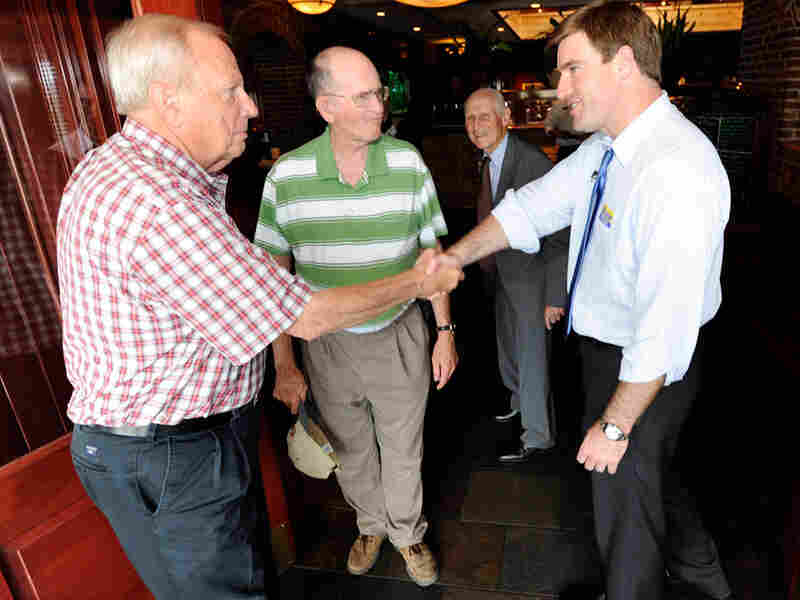 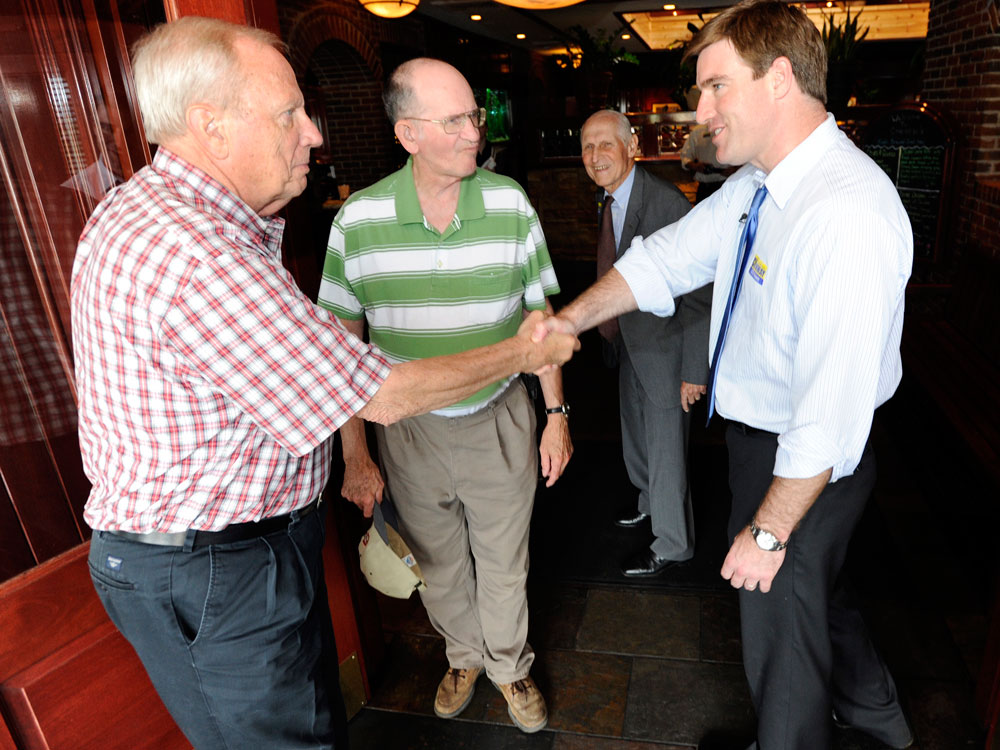 "I would've, I think, had the courage to march with Martin Luther King to overturn institutional racism, and I see no place in our society for institutional racism," Paul said. "I haven't really read through [the Civil Rights Act] because it was passed 40 years ago and hadn't really been a pressing issue in the campaign."

Paul has been pressed on his views about the Civil Rights Act since last month, when, in an interview with the Louisville Courier-Journal, he said: "I like the Civil Rights Act in the sense that it ended discrimination in all public domains, and I'm all in favor of that. ... I don't like the idea of telling private business owners -- I abhor racism ... I do believe in private ownership."

In the NPR interview, Paul repeated a theme he carried on the campaign trail: that there is risk in life, and when accidents happen, it doesn't always follow that someone is to blame and has to pay. Referring specifically to the recent deadly mine explosion in West Virginia, Paul said, "I don't think that I see some evil business out there that's trying to harm people."

Paul also told NPR he has a "Tea Party mandate" that is for "good government type of things."

"Things like maybe Congress should only pass legislation that they apply to themselves as well," he said. "Also, that each piece of legislation they pass should point to where in the Constitution they get the authority for it."

Paul's fall opponent, Jack Conway, 40, has staked his candidacy on his family's long presence in Kentucky and work he's done as the state's lawyer -- particularly efforts to crack down on online child pornographers and illegal prescription drug use. He, like Paul, holds a degree from Duke University, and he earned his law degree from George Washington University.

Like Kentucky Republicans, state Democrats also are straining to unite their party after a bruising primary. Conway, who defeated Lt. Gov. Daniel Mongiardo by fewer than 3,600 votes, said Wednesday that he was encouraged that both he and his opponent outpolled Paul in the primary.