Accessibility links
BP Recasts Spill Size As Oil Fouls Louisiana Marshes A spokesman for the British oil giant says its figure of 5,000 barrels a day leaking into the Gulf of Mexico has always been just an estimate, and that more oil is spewing out than BP has previously acknowledged. Heavy oil from the massive slick has reached marshes in Louisiana, which Gov. Bobby Jindal said represents a worst-case scenario. 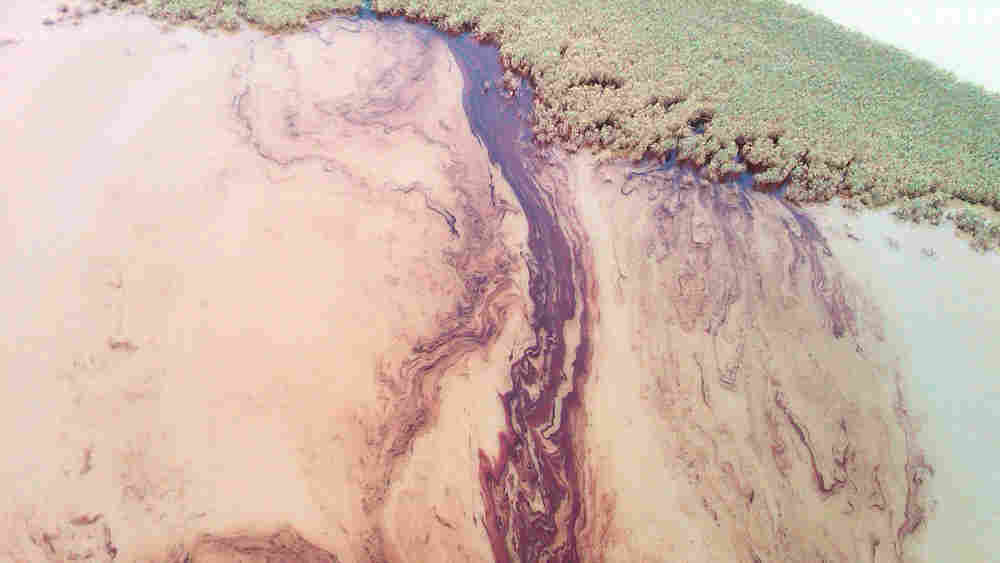 An aerial photo provided by the Louisiana governor's office this week shows thick, rust-colored ribbons of emulsified oil encroaching on the shores of the Pass a Loutre Wildlife Management Area in Louisiana. AP hide caption 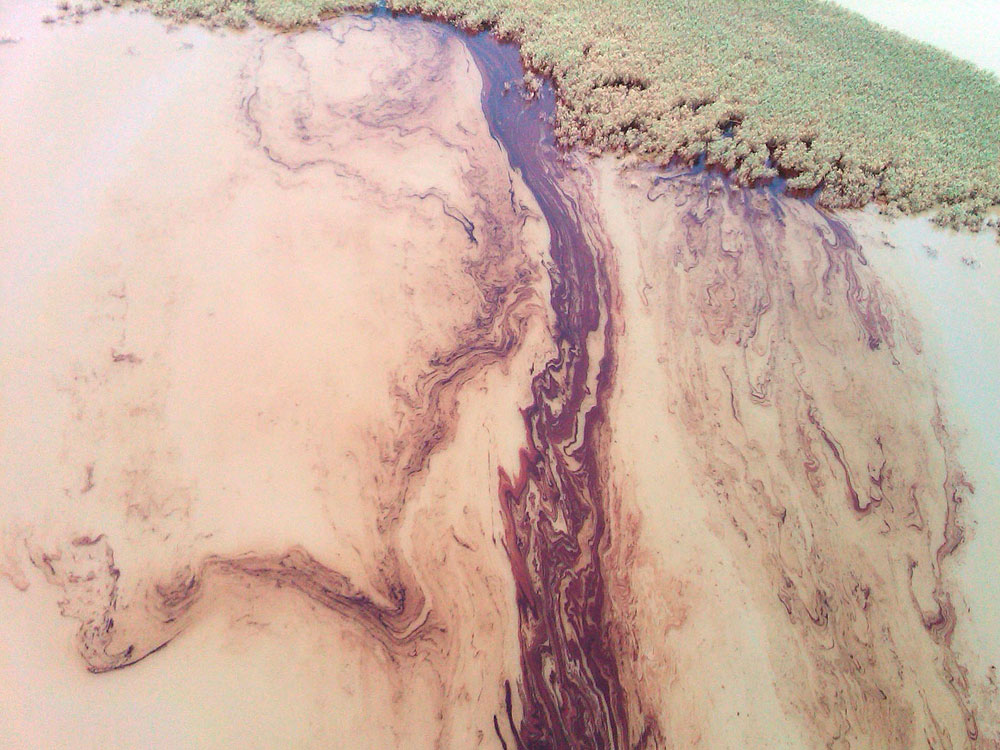 An aerial photo provided by the Louisiana governor's office this week shows thick, rust-colored ribbons of emulsified oil encroaching on the shores of the Pass a Loutre Wildlife Management Area in Louisiana.

A BP official conceded Thursday that more oil is spewing into the Gulf of Mexico than the company had previously acknowledged, as crude from the massive spill seeped into coastal areas from Louisiana to Alabama.

Company spokesman Mark Proegler said about 5,000 barrels of oil a day are being diverted by a mile-long tube inserted into the leaking pipeline -- equal to the amount that BP and the government have estimated is gushing out. But Proegler said some oil is still escaping into the water, though he would not say how much. 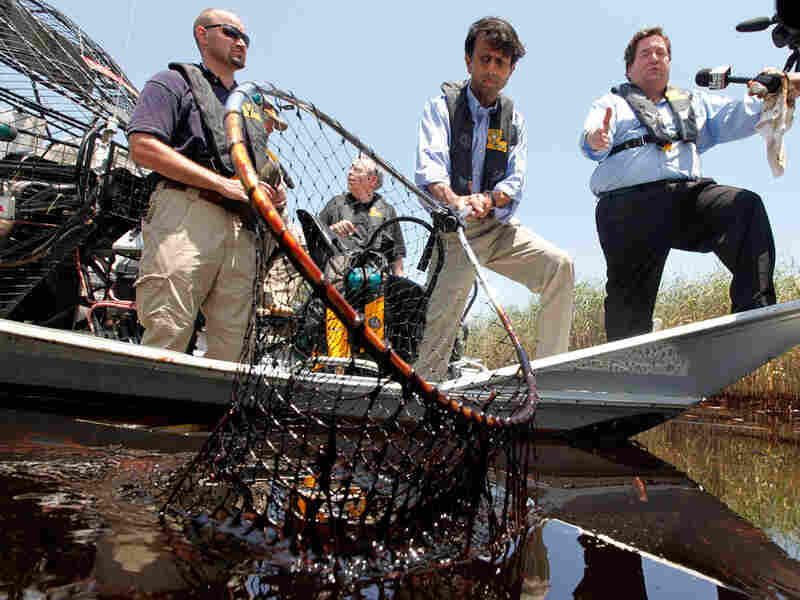 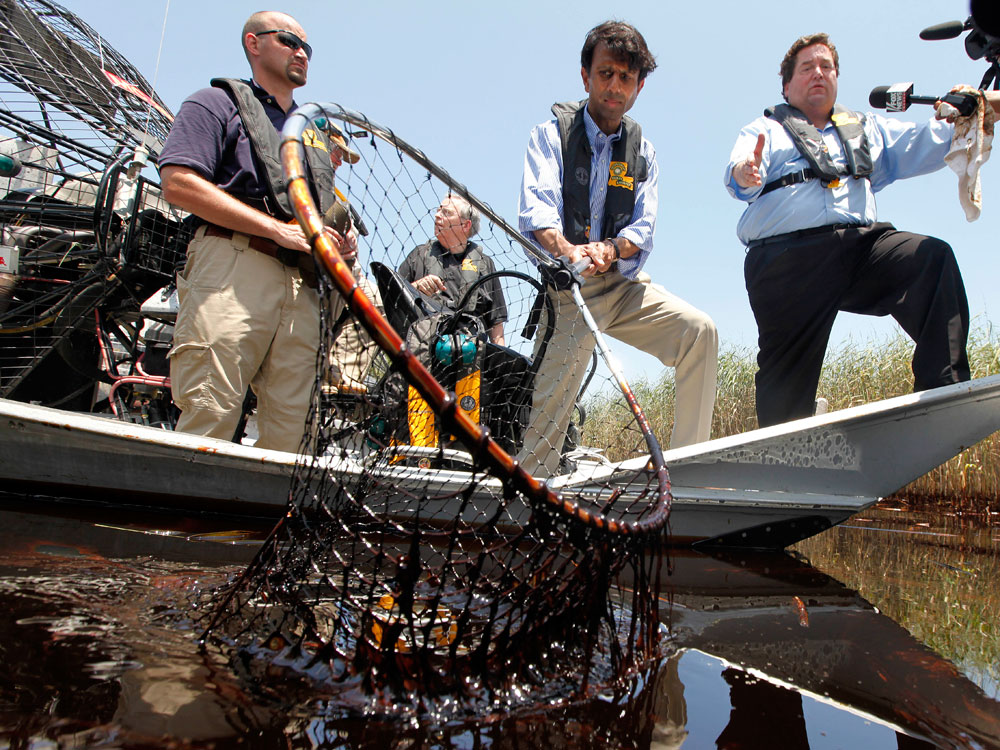 Louisiana Gov. Bobby Jindal (center) used a net to show the penetration of oil as he and Plaquemines Parish President Billy Nungesser (right) toured the marshes of Pass a Loutre, La., on Wednesday.

Proegler said the 5,000-barrel figure has always been just an estimate. The British oil giant's admission comes a full month after the Deepwater Horizon rig exploded and sank -- and after scientists' reports of vastly larger estimates.

But White House press secretary Robert Gibbs said Thursday that the White House is asking the company to put more information about the Gulf oil spill -- including measurements of the size of the leak -- on its website and be more transparent about its response.

A live video feed of the leak posted online Thursday at the insistence of lawmakers shows what appears to be a large plume of oil and gas still spewing next to the tube that's carrying some of it to the surface.

"What you see are real-time images of a real-world disaster unfolding 5,000 feet below the surface of the Gulf," said U.S. Rep. Edward Markey (D-MA). "These videos stand as a scalding, blistering indictment of BP's inattention to the scope and size of the greatest environmental catastrophe in the history of the United States."

Watch Video Of The Spill On The House Committee's Website

As chocolate-thick crude penetrated Louisiana marshes, the National Oceanic and Atmospheric Administration said a small part of the slick had drifted into the Gulf Stream's "loop current." The powerful north-flowing Gulf Stream could act as a conveyor belt for the oil, carrying it around Florida and up the Eastern seaboard.

Louisiana Gov. Bobby Jindal said the presence of thick oil, instead of the light sheen that had already penetrated areas along the Gulf Coast, represented a worst-case scenario.

"This is serious -- this is the heavy oil that everyone has been fearing. It is here now," Jindal said Wednesday as he toured the Mississippi Delta by boat and swept a fishnet through water, holding up dark, dripping glop. The region is home to rare birds, mammals and a wide variety of marine life.

"This is one of the oldest wildlife management areas here in Louisiana, and now it is covered in oil," Jindal said.

Billy Nungesser, the president of coastal Plaquemines Parish, La., said the oil "has laid down a blanket in the marsh that will destroy every living thing there." 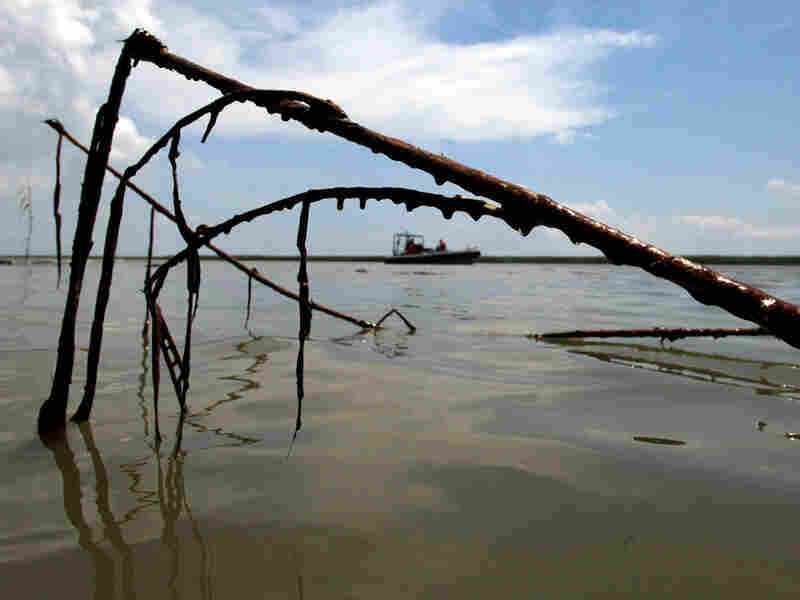 A Greenpeace boat floats close to oil-soaked cane near the mouth of the Mississippi River south of Venice, La. Charlie Riedel/AP hide caption 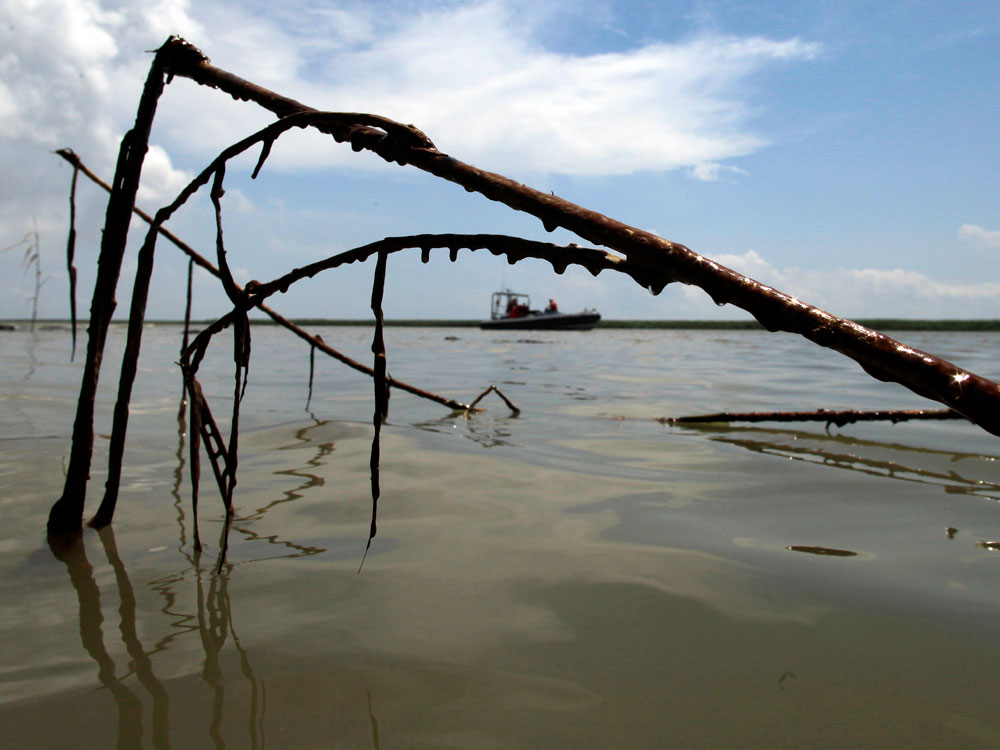 A Greenpeace boat floats close to oil-soaked cane near the mouth of the Mississippi River south of Venice, La.

A young brown pelican, one wing and its neck matted with oil, was found dead Thursday morning on a sand spit in Louisiana's Breton National Wildlife Refuge. Scientists said it's likely that oil killed it.

Meanwhile, the Environmental Protection Agency directed BP to use a less toxic form of chemical dispersants to break up the oil spill.

In a notice to BP, the EPA said that while it initially approved the current dispersant being used, much about the effects of the chemical remains unknown. One of the chief agents being used, called Corexit 9500, is identified as a "moderate" human health hazard that can cause eye, skin or respiratory irritation with prolonged exposure, according to safety data documents.

Under the order, which BP received Wednesday night, the company has 24 hours to identify at least one approved dispersant product that is effective, available in large quantities and meets specified toxicity limits.

The notice says BP must begin using only the approved alternative within 72 hours of submitting its list of alternatives to the EPA and getting EPA approval.

Florida's state meteorologist said it would be at least another full week before the oil reaches waters west of the Keys, and state officials sought to reassure visitors that its beaches are still clean and safe.

U.S. officials were also talking to Cuba about how to respond to the spill should it reach the island's northern coast, a State Department spokesman said.

Even by BP's initial leak estimates, more than 140,000 barrels have already poured into the Gulf since the April 20 rig blast that has created the worst U.S. environmental disaster in decades. The Exxon Valdez tanker spilled 260,000 barrels in Alaska in 1989.

An independent scientist who analyzed underwater footage of the gusher for NPR says the spill appears to be even larger than he previously thought.

Purdue University engineering professor Steven Wereley originally estimated the flow rate could be as high as 70,000 barrels a day -- far outpacing the official figure of 5,000 barrels. After examining newly released video of the well rupture, he told a House panel this week that he now believes the spill is 100,000 barrels daily.

Interior Secretary Ken Salazar said Thursday that scientists will be using that live video, along with satellite imagery, to check BP's estimates.

"The government will be making its own, independent verification of what those total numbers are," Salazar said on CBS' The Early Show.

The president of the National Wildlife Federation told the House Transportation and Infrastructure Committee this week that BP had not been adequately forthcoming with information on the spill.

"Too much information is now in the hands of BP's many lawyers, and too little is being disclosed to the public," said Larry Schweiger. "The Gulf of Mexico is a crime scene, and the perpetrator cannot be left in charge of assessing the damage."

BP has received thousands of ideas from the public on how to stop the oil gusher, but some inventors have complained that their efforts are being ignored. Company spokesman Mark Salt said that while BP wants the public's help, considering the proposed fixes takes time.

"They're taking bits of ideas from lots of places," Salt said. "This is not just a PR stunt."

Over the weekend, BP engineers succeeded in hooking up a mile-long tube to the broken pipe and channeling some oil to a ship on the surface. On Thursday, they were marshaling equipment and conducting tests ahead of a new effort to choke off the oil's flow.

BP said it hopes to start what's known as a "top kill," which involves shooting heavy mud into the blown-out well, by Sunday. The procedure has never been tried at a depth of 5,000 feet below sea level, so scientists and engineers have been preparing for some time for the complex operation, according to BP Chief Operating Officer Doug Suttles.

"The philosophy from the beginning is not to take any action which could make the situation worse, and those are the final steps we're doing," he said.

If that fails, engineers are considering a "junk shot," which involves shooting knotted rope, pieces of tires and golf balls into the blowout preventer. Crews hope the debris will lodge into the nooks and crannies of the device to plug it.

Greenpeace activists scaled BP's London headquarters Thursday and hung up a banner accusing the oil company of polluting the environment. BP spokesman Robert Wine called it "a very calm and genteel protest" and said no employees had been prevented from getting to work.

Environmental groups in Washington also criticized how the British company has handled the response since the Deepwater Horizon rig exploded and sank, and urged the U.S. government to take greater control of the situation.