Accessibility links
Homeboy Industries, A Priest's Antidote To Gang Life, Falls On Hard Times For more than 21 years, Homeboy Industries has helped thousands of Los Angeles gang members remove their tattoos, get counseling, find jobs and move away from violence. Now the organization founded and run by the Rev. Gregory Boyle is in serious financial trouble. 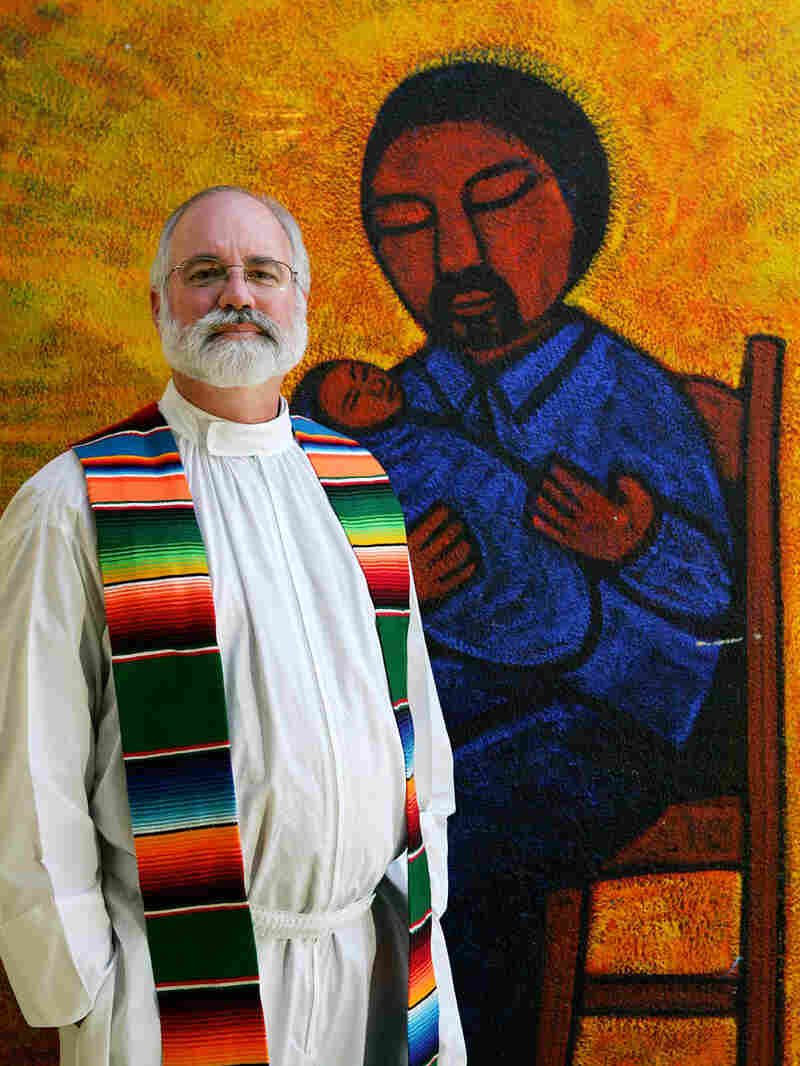 When this photo was taken in 2004, the Rev. Gregory Boyle had been at work in East Los Angeles for 20 years. The mural was painted by artist Jose Ramirez at the Delores Mission. Kevork Djansezian/AP hide caption

In Los Angeles, generations of ex-gang members have found jobs and new lives, thanks to Homeboy Industries.

It's the largest gang rehabilitation program in the country, founded and operated by a Jesuit priest, the Rev. Gregory Boyle.

But the organization is in a financial crisis that could spell its end.

For more than 21 years, Homeboy Industries has helped thousands of gang members remove their tattoos, get counseling, find jobs and move away from violence.

In fact, the nonprofit's motto has been: "Nothing stops a bullet like a job."

But nothing stops 300 jobs like a $5 million deficit. Recently, Boyle tearfully told his staff of ex-gang members he'd have to let them go.

"We hope that someone will rescue us," Boyle said. "But maybe it won't happen. Is there another place in the county of L.A. where people with records and with a gang past can go and jump-start their life? No, there isn't."

Boyle says the program's successful Homeboy bakery, silk-screening and the Homegirl Cafe remain open for business. But with very little government funding and no major donations, there's simply no money for services. After Boyle announced the layoffs, many of his workers vowed to stay on as volunteers.

"I couldn't get from my car to here without people hugging me and [saying] we're staying, we're not going anywhere, you don't have to pay us," Boyle said. "But they can't do this forever. ... We're probably in denial a little bit, but we're hoping ... the fat lady hasn't sung yet."

Civil rights attorney and gang prevention expert Connie Rice said the layoffs are a tragedy for what she calls the best gang recovery program in the country. "Greg Boyle is doing what our $8 billion corrections system fails to do, which is rehabilitate people so they don't go back to crimes," Rice said.

Homeboy Industries has been criticized for helping criminals. But it's also been praised by law enforcers and city leaders. To the homeboys and homegirls he helps, Boyle is affectionately known as Father G, G-Dogg or simply "G." 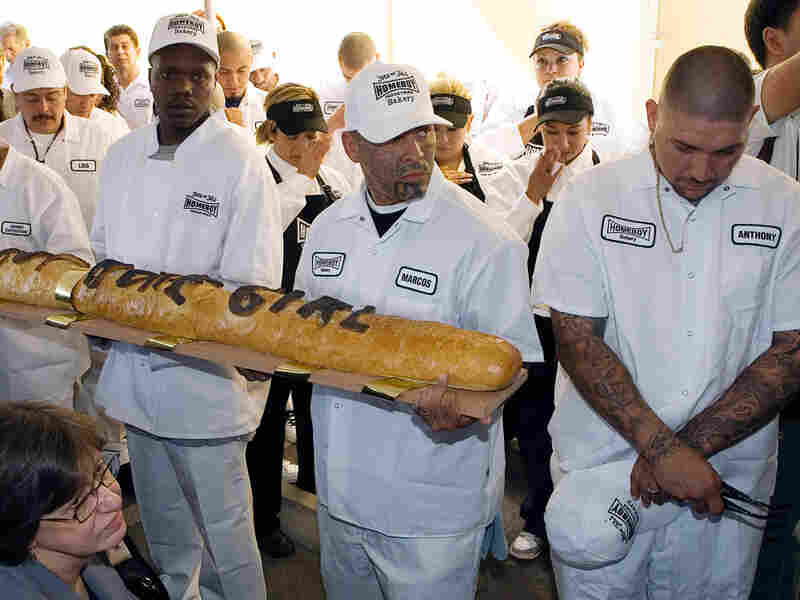 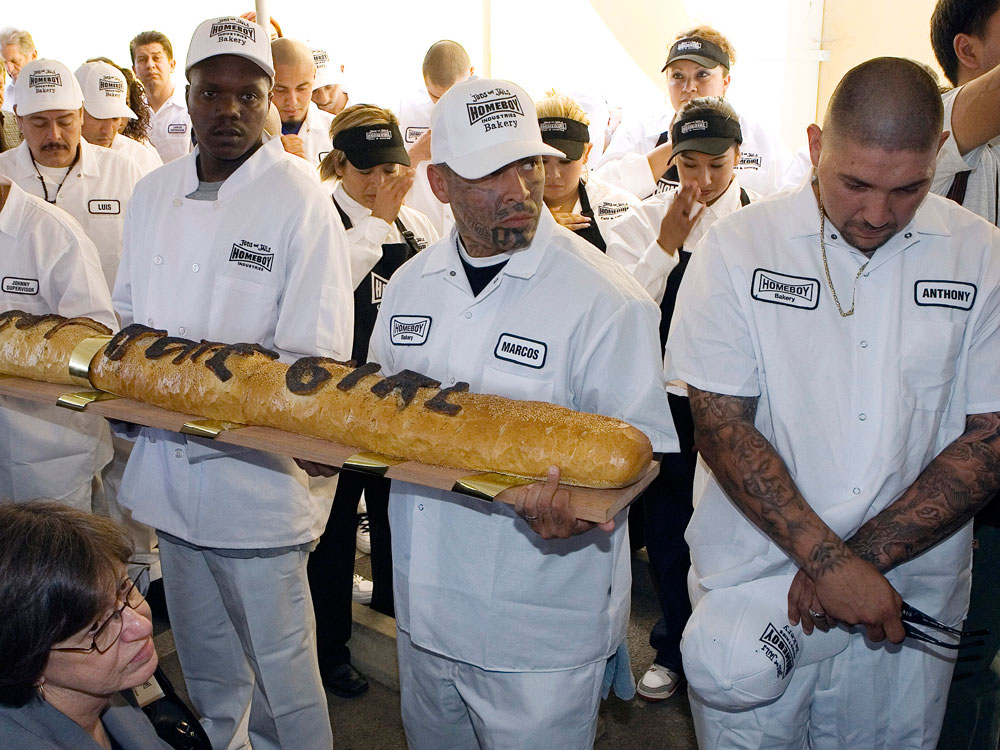 When Homeboy Industries Bakery reopened in October 2007, workers celebrated by baking a giant loaf of bread.

"The gift that Father G has given us is he sees the best in all of us," said Vance Webster, a former member of the Crips gang.

Webster was serving a life sentence for accessory to murder when he met Boyle. After helping Webster get paroled, Boyle hired him as a security guard and gang prevention speaker.

Compassion seems to be Boyle's key. Agustin Lizama is an anger management and domestic violence counselor for Homebody Industries. He first met Boyle while in juvenile hall.

"I remember the first time he ever told me he loved me," Lizama said. "To me, it was, like, uncomfortable because I'm here looking at him like, 'Man, how's this white man gonna tell me he loves me when not even my own mom tells me that.' But he just started showing me how to love, how to be loved."

Jocelyn Esparza, 22, has been going to Homeboy Industries to remove the obscene tattoos she scrawled under her eyes.

"There's generations and more generations that need help, you know? If Homeboys was to close, man, there'd be no more hope," she said.

Hoping for a miracle, the homeboys and homegirls are now appealing to everyone with money they can think of. They even have a Facebook campaign to get Father G on Oprah.

"We're gonna stick by Father G's side," Esparza said. "He helped us when we needed him, and now he needs us and we'll be here till the wheels fall off."