Accessibility links
Anger Simmers Over Spreading Gulf Oil Slick Frustration over the thick, oozing crude tainting Gulf Coast marshland has been building in the month since the Deepwater Horizon disaster. Oil companies blame one another, state and local officials say the federal response has been lacking, and ordinary residents have expressed outrage over the impact on their home states. 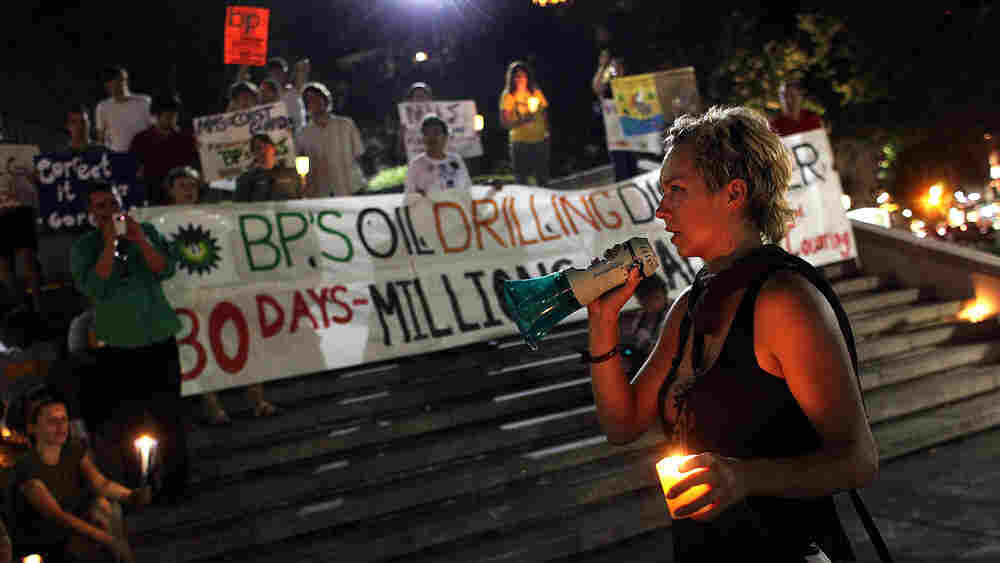 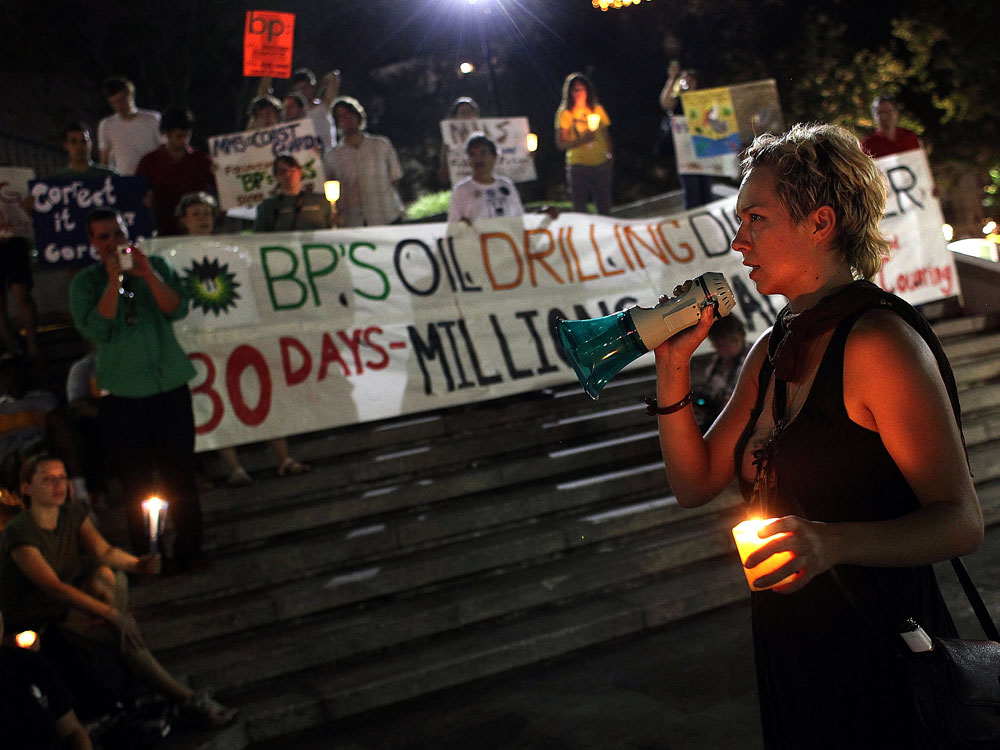 Protesters gathered for a candlelight vigil Thursday in New Orleans to mark the one-month anniversary of the BP oil spill.

Gulf Coast residents are expressing increasing anger and frustration over BP's inability to plug an undersea leak that has sent an oily slick washing ashore, threatening ecosystems and livelihoods from Louisiana to Florida.

In Louisiana, thick oil from the April 20 Deepwater Horizon rig blowout has crept into delicate marshes, feeding and breeding grounds for much of the state's famed seafood, as well as for birds and other wildlife.

"This is just heartbreaking," said Emily Guidry Schatzel of the National Wildlife Federation as she examined stained reeds in a particularly devastated marsh.

Why wouldn't they have any contingency plan? I'm not a genius, and even I would have thought of that.

Until now, only tar balls and a sheen of oil had come ashore in Louisiana. But chocolate brown and vivid orange globs and sheets of foul-smelling oil have begun coating the reeds and grasses of the state's wetlands. Fishing boats loaded with oil booms have been going in and out of a command center in the St. Bernhard parish of New Orleans in recent days trying to contain the slick.

"We send the boats out on a daily basis in different rotations to either do boom repair work or put new booms in strategic places where we think the oil might be coming in," Pat Touchard, an oil and chemical spill contractor hired by BP, told NPR.

In Florida, where the main slick has yet to reach, E.J. Boles said he was angry because BP and federal authorities didn't seem to have had a plan for preventing such a disaster.

"Why wouldn't they have any contingency plan? I'm not a genius, and even I would have thought of that," said the 55-year-old musician from Big Pine Key.

The Gulf of Mexico slick is also spreading fear among potential tourists, with resorts in the Florida Keys reporting waves of cancellations ahead of the financially important Memorial Day weekend. 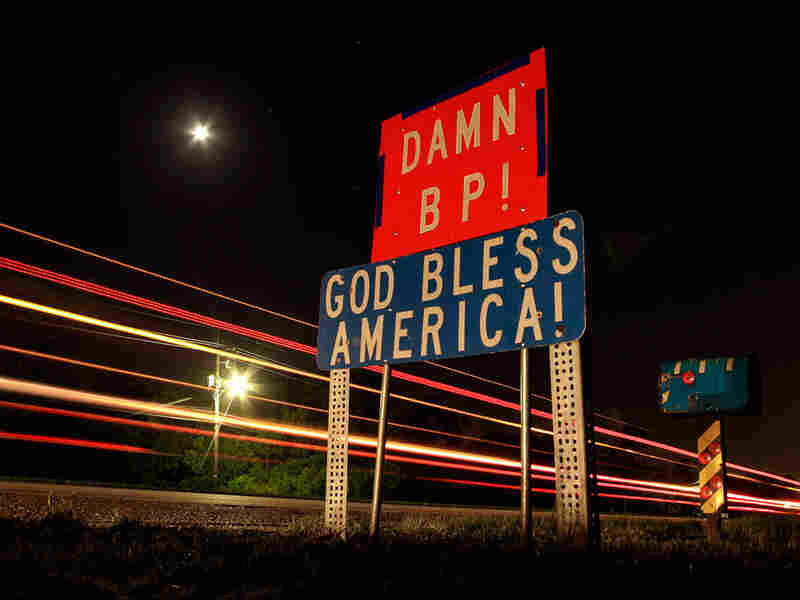 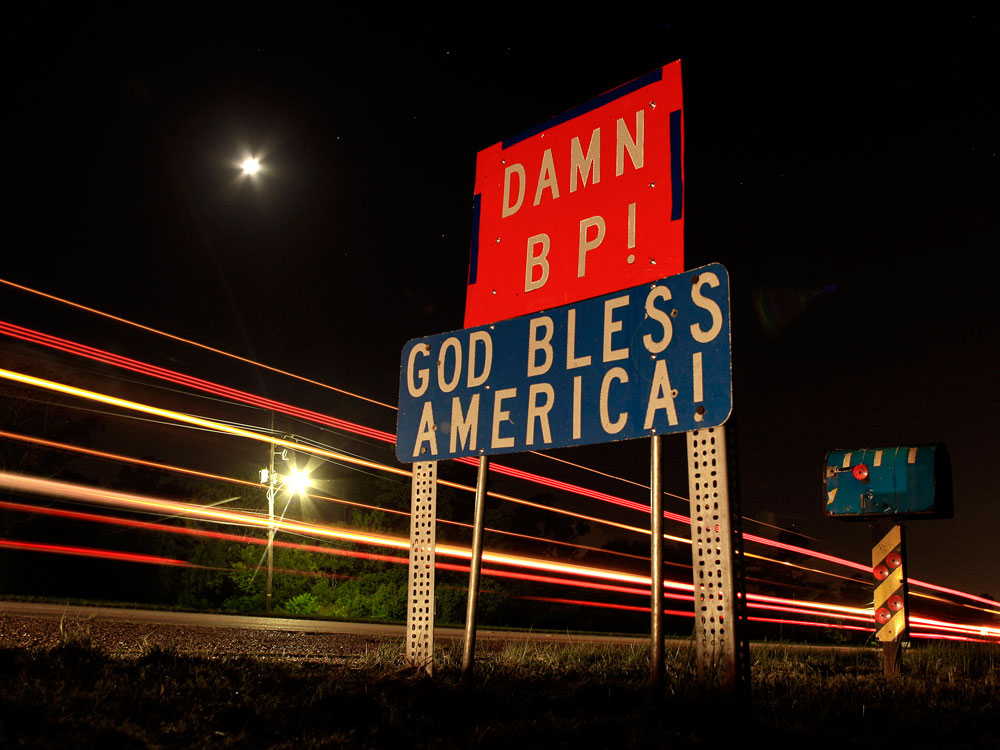 A sign chastising BP is seen along a highway south of Belle Chasse, La.

"We've seen a tremendous amount of phone calls, we have got some cancellations, primarily because of the news reports of the tar balls that showed up at a couple Key West beaches," said Andy Newman of the Florida Keys tourism council.

A month after the Deepwater Horizon exploded and sank, BP has conceded that much more oil is coming out of the well than it had acknowledged. The company originally estimated the leak at 5,000 barrels a day, but independent analyses, including one done for NPR, show the flow rate is much higher.

BP said Thursday what some scientists have been saying for weeks: More oil is flowing from the leak than either the company or the Coast Guard had estimated. But it wouldn't say how much.

In a statement released by the company on Friday, BP said it "has, and will continue, to support the government's work to determine the rate of flow from the well."

"Throughout the process, BP has made it a priority to quickly and consistently provide the National Oceanic and Atmospheric Administration and the Coast Guard with requested information," it read.

NOAA said it is working on a new estimate of how much oil is gushing from the well. Agency officials would not speculate on how big the leak might be, either.

The oil giant's chief operating officer, Doug Suttles, said he understands the public frustration. "I know people want more information. ... I can tell you we're supplying information. We're trying to give the data as quick as we can," he told CBS' The Early Show on Friday.

In the worst-case scenario, he said, the gusher could continue until early August, when engineers may finish a new well being drilled to try to permanently cap the flow. But Suttles said he believes the rich Gulf environment will recover, in part because it is a large body of water that has withstood other oil spills.

"I'm optimistic, I'm very optimistic that the Gulf will fully recover," he said.

A live video feed of the underwater gusher, posted online after lawmakers exerted pressure on BP, is sure to fuel public anger. It shows what appears to be a large plume of oil and gas still spewing into the water next to the stopper-and-tube combination that BP inserted to carry some of the crude to the surface. The House committee website where the video was posted promptly crashed because so many people were trying to view it.

"I think now we're beginning to understand that we cannot trust BP," said Rep. Edward J. Markey (D-MA). "BP has lost all credibility. ... It's clear that they have been hiding the actual consequences of this spill."

The Environmental Protection Agency directed BP on Thursday to employ a less toxic form of the chemical dispersants it has been using to break up the oil and keep it from reaching the surface.

BP is marshaling equipment for an attempt as early as Sunday at a "top kill," which involves pumping heavy mud into the top of the blown-out well to try to plug the gusher. If it doesn't work, backup plans include a "junk shot" -- shooting golf balls, shredded tires, knotted rope and other material into the well to clog it up.

Steve Newborn of member station WUSF in Tampa, Fla., contributed to this report.