Accessibility links
Decades After Its Heyday, Disco Fever Grips Cuba Young Cubans in the 1970s tuned their radios to faint signals from Florida to get their disco fix. Now, as Communist authorities have relaxed the rules, middle-aged Cubans are flocking to discos -- including the bar at Havana's Karl Marx Theater -- to dance to the tunes of the Bee Gees and Kool & The Gang. 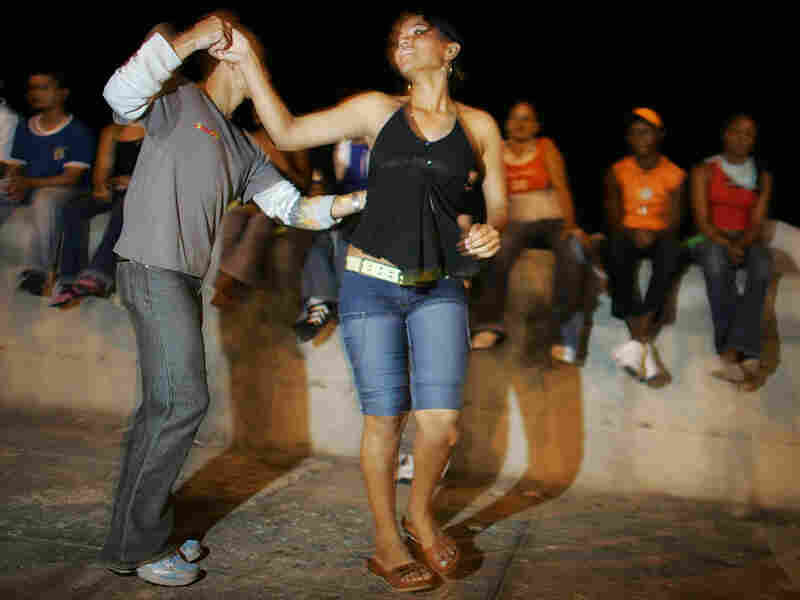 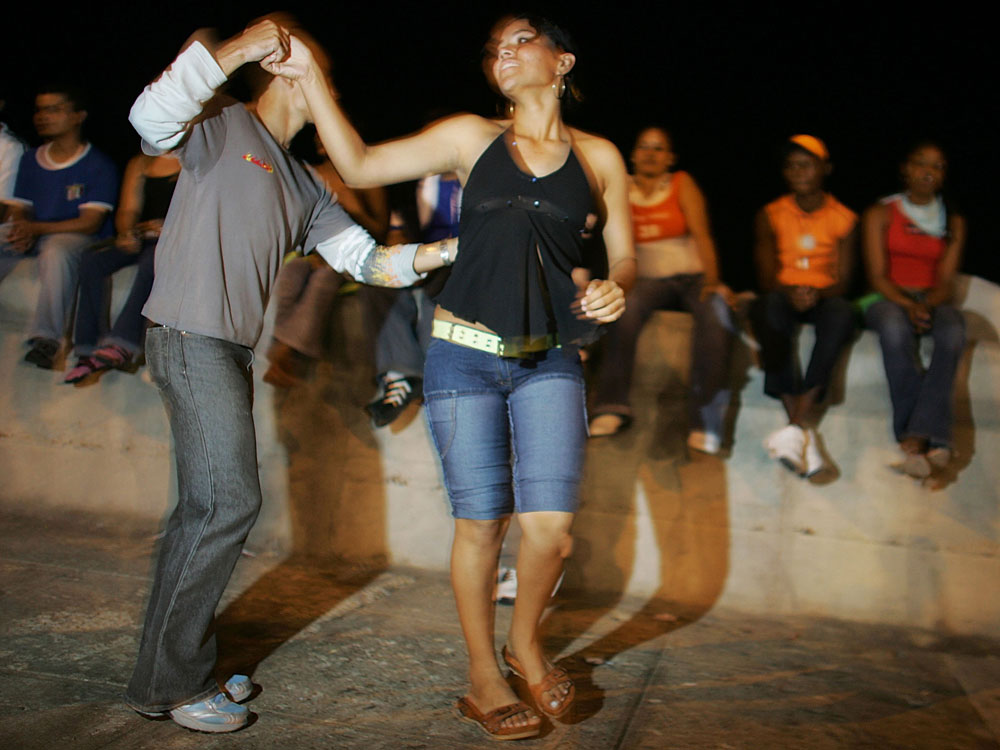 More than 30 years after the disco craze, middle-age Cubans are finally living the era in discotembas — bars and public gatherings playing 1970s disco hits and attracting a graying crowd of dancers.

But some things in Cuba have changed since then. These days, Havana is back in the throes of disco fever.

A resident of Havana, Ricardo Fragela is a huge, lumbering man with a warm smile and an impressive music collection. His living room is an archive of American pop and rock 'n' roll.

He holds an autographed CD case as if it were a bar of gold. The pop disco ensemble KC and the Sunshine Band sent it to him from Florida after he wrote a fan letter.

As a teenager in the late 1970s, Fragela would tune his radio to the faint signals of radio stations out of Miami and Key West. He wrote down Casey Kasem's Top 40 countdown every week, filling entire notebooks.

"It wasn't illegal to listen to that music," Fragela says. "We were just decent young people, who studied and went to school, and weren't hurting society in any way. We just loved the music."

More than 30 years later, on a recent Saturday afternoon in the bar of the Karl Marx Theater, a crowd of 100 or so is writhing in the darkness, dancing in choreographed rows like on an episode of Soul Train.

There's a big disco ball on the ceiling, and music videos pirated from VH1 are playing on a huge TV screen. Kool & The Gang hits like "Get Down On It" and "Celebrate" are pulsing from a wall of speakers. 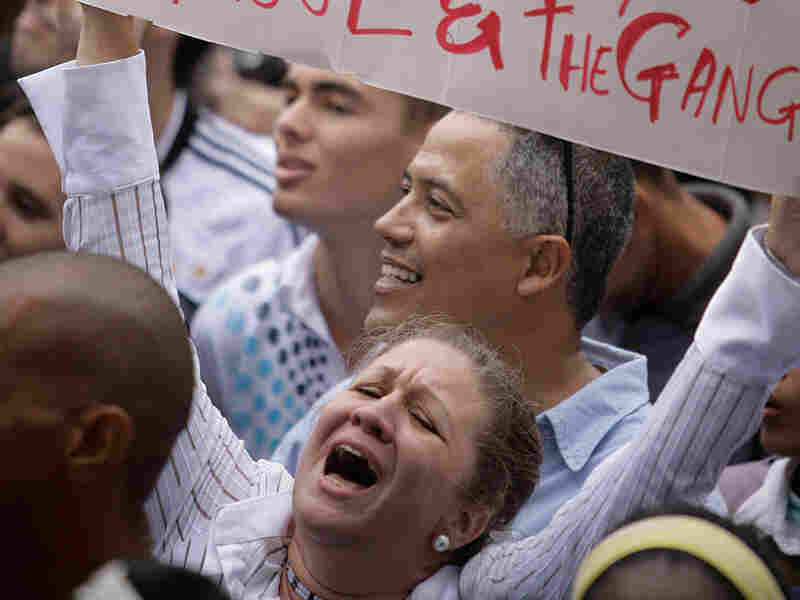 A fan of Kool & the Gang shouts during the band's concert in Havana in December. Cuba's Communist authorities no longer frown on American pop music and rock 'n' roll. Franklin Reyes/AP hide caption 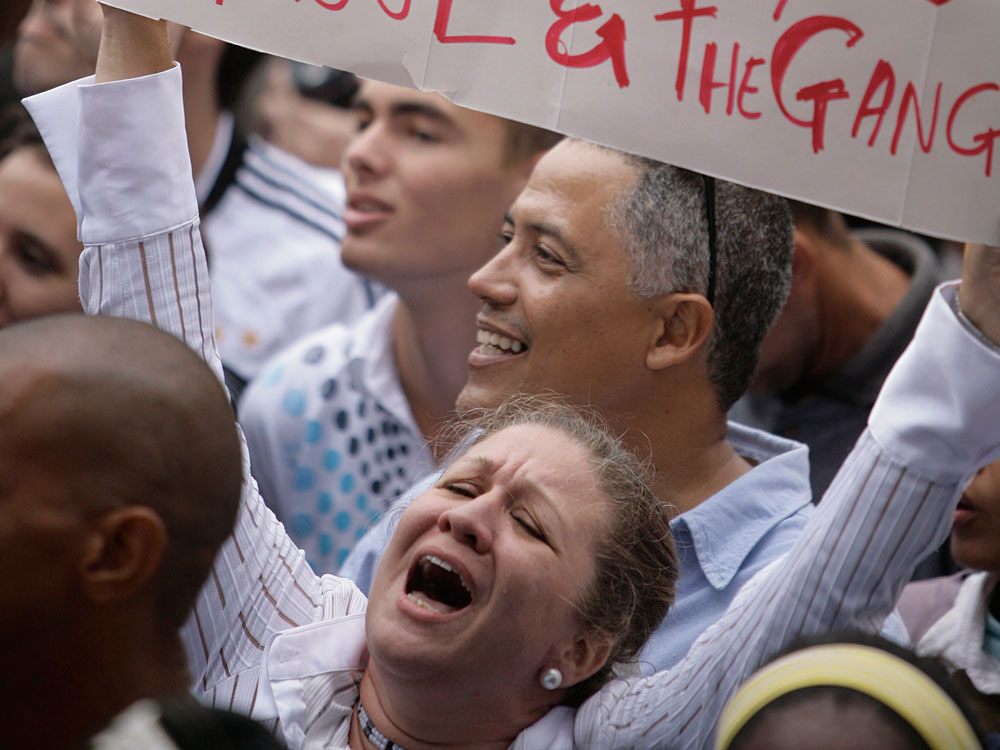 A fan of Kool & the Gang shouts during the band's concert in Havana in December. Cuba's Communist authorities no longer frown on American pop music and rock 'n' roll.

In the 1990s, at the height of Cuba's post-Soviet economic crisis, Communist authorities opened new discotecas all over the country, mostly to appeal to foreign tourists. The venues were too pricey for most Cubans, and they sat empty for much of the day.

Fragela and his friends had families of their own by then, but their musical tastes hadn't changed. So they persuaded some of the state-run-club managers to hire them as DJs for afternoon dance parties that would appeal to an older, more Cuban clientele. They were dubbed discotembas -- temba is Cuban slang for a middle-aged person who's a bit past his or her prime.

As disco fan Samira Reyes explains it, temba is more of a term of endearment than an insult. Pot bellies, wrinkles, a receding hairline -- that's temba.

The discotembas take place on weekend afternoons, making it easier for parents to get child care. And they are often over by 9 p.m., so it's not hard to get up for work the next day.

Harry Otero is a disco lover -- and a grandfather.

He says discotembas are different from the discotecas that play popular salsa and reggaeton music. People are polite enough not to smoke, they don't drink much, and there are no drugs, he says.

"We're grandparents now," he says, "so we have to set a good example."

Otero was on the balcony of the Karl Marx discotemba with Ibis Garcia, a 56-year-old actress with heavy eyelashes and tall heels. She said the music makes her nostalgic, and the nostalgia is what keeps her young.

"This music makes me feel young because I am young," Garcia says.

"And there are other things that keep me young, too," she adds with a wink. "Like men. How do you like that answer?"

And with that, Garcia went back to the dance floor, the Bee Gees "Stayin' Alive," and a party no Marxist could resist.