Accessibility links
Hurricane, Oil Spill Could Be Troubling Mix Scientists say the massive oil spill in the Gulf of Mexico will mean any hurricane in the Gulf could inflict extra damage on the coastline. They also worry that the presence of oil could actually lead to more powerful hurricanes. Forecasters already expect the approaching Atlantic hurricane season to be busier than usual. 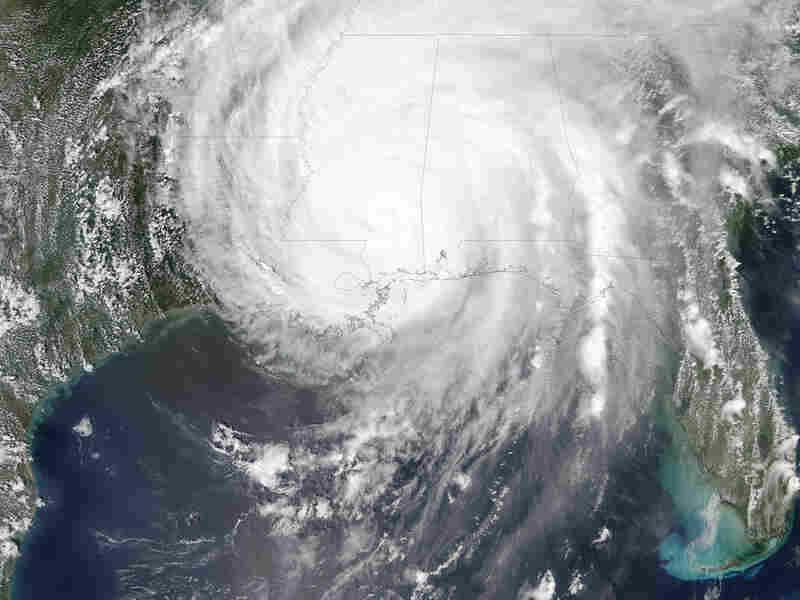 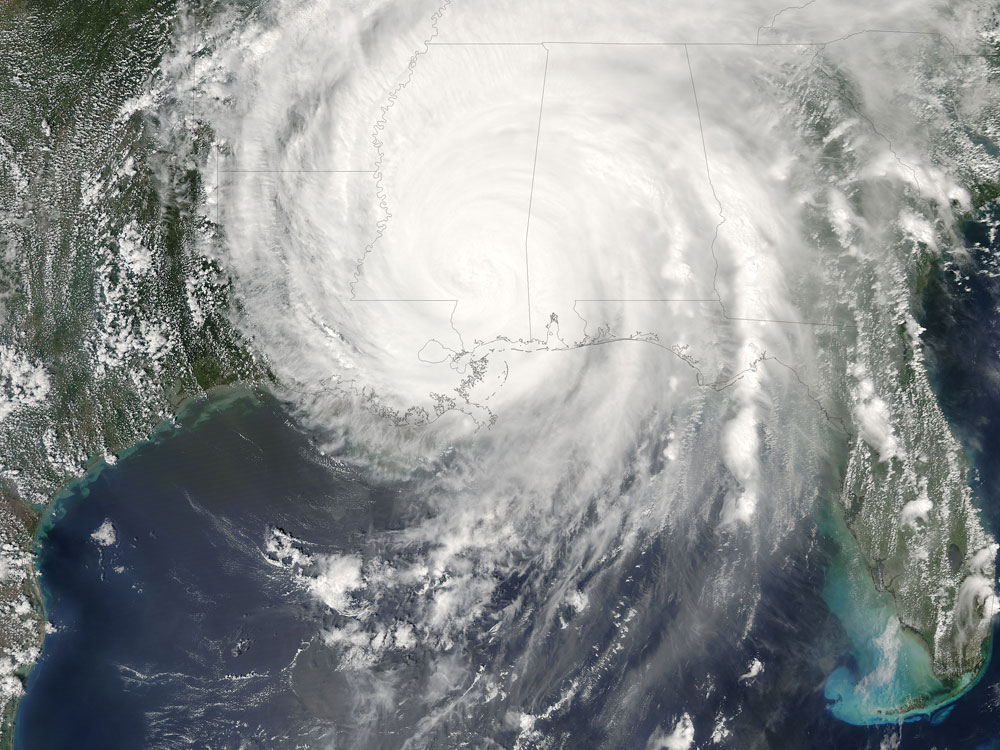 If a hurricane encounters the oil slick now covering parts of the Gulf of Mexico, the result could be devastating, scientists say. Not only could any hurricane increase the damage that oil does to coastal wetlands, but the presence of oil could lead to a more powerful hurricane, they say.

Nobody knows for sure, though, because there's no record of a hurricane ever crossing paths with a large oil spill.

The Atlantic hurricane season begins June 1, and forecasters expect it to be busier than usual. Meanwhile, oil continues to gush into the Gulf of Mexico from the site where the Deepwater Horizon rig exploded on April 20 and sank two days later in 5,000 feet of water.

Since then, oil has been accumulating at the surface. And that could be raising the temperature of the surrounding water, says Kerry Emanuel, a hurricane expert at the Massachusetts Institute of Technology.

"You have this black surface, and it's doing two things," Emanuel says. "First of all it's absorbing sunlight. And secondly, it is curtailing evaporation from the Gulf."

"So theoretically, the Gulf underneath this oil slick should be getting hotter than it normally would be." And hotter water helps create more powerful hurricanes.

It's hard to know if the water is actually getting hotter, though, because oil prevents satellites from taking accurate temperature readings.

Impact On The Environment

Environmental scientists are already predicting that oil from the spill will damage the vegetation in coastal marshes. And the damage could be worse if a hurricane pushed oil deep into a wetland, or into currents that would carry it down Florida's west coast. 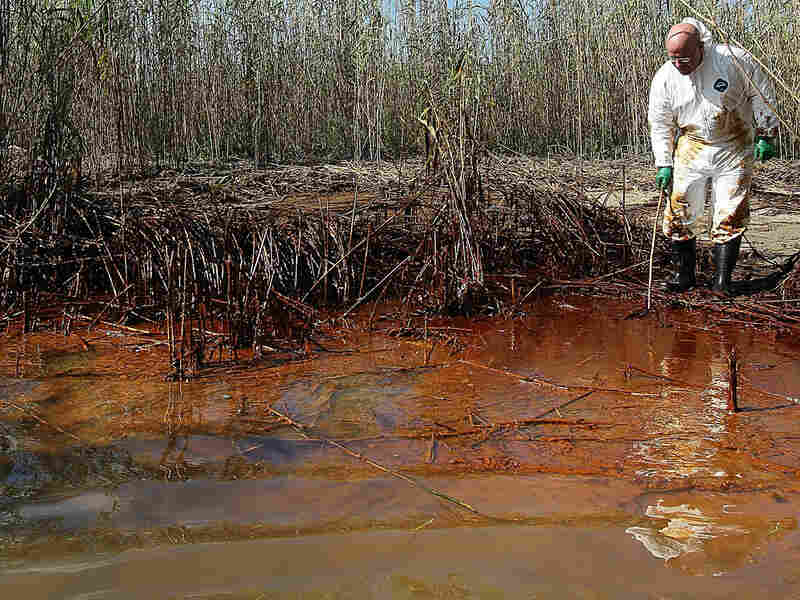 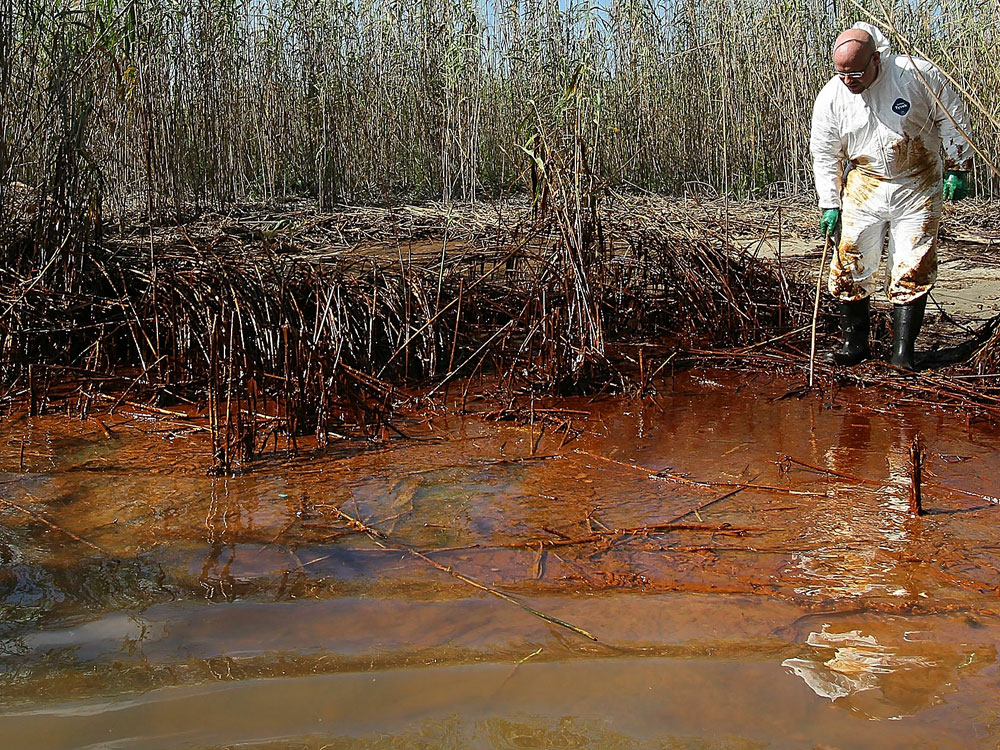 Phil Radford, executive director of Greenpeace USA, inspects oil-covered reeds along the Gulf of Mexico while visiting the disaster site on May 20.

"That's a big concern," Emanuel says. "Hurricanes would be pretty effective at dispersing [the oil] and pushing it around."

Other scientists say the amount of damage may depend on timing.

A hurricane might even be beneficial if it arrives before oil has a chance to damage coastal marshes, says Irving Mendelssohn, who studies coastal plant ecology at Louisiana State University.

"It's very possible that the hurricane will tend to both dissipate and break up the oil faster," he says. That could dilute the toxic substances and result in minimal damage to plants, he says.

But Mendelssohn says there could be more damage if the hurricane arrived after oil had reached the coast.

"Then the hurricane results in greater erosion of the wetland," he says, "because the wetland has already lost its vegetation and is already in a degraded state."

Marsh plants are hardy, and usually recover from a single encounter with oil, especially the less toxic type involved in this spill, Mendelssohn says. His great fear is that some combination of hurricanes, ocean currents and the ongoing spill will cover the same marsh plants with oil repeatedly.

"That type of re-oiling will completely kill the plant," he says, destroying the wetland, and leaving the coast without a key defense against hurricanes.