Accessibility links
'Dangerous Book' Intended To Inspire Heroism Conn Iggulden teamed up with his brother, David, to share tales of men and women who responded to difficult moments with grace and pluck to save themselves and others. Their book doesn't attempt to hide the dark side of many of these heroes, whose daring deeds are better remembered than their misconduct. 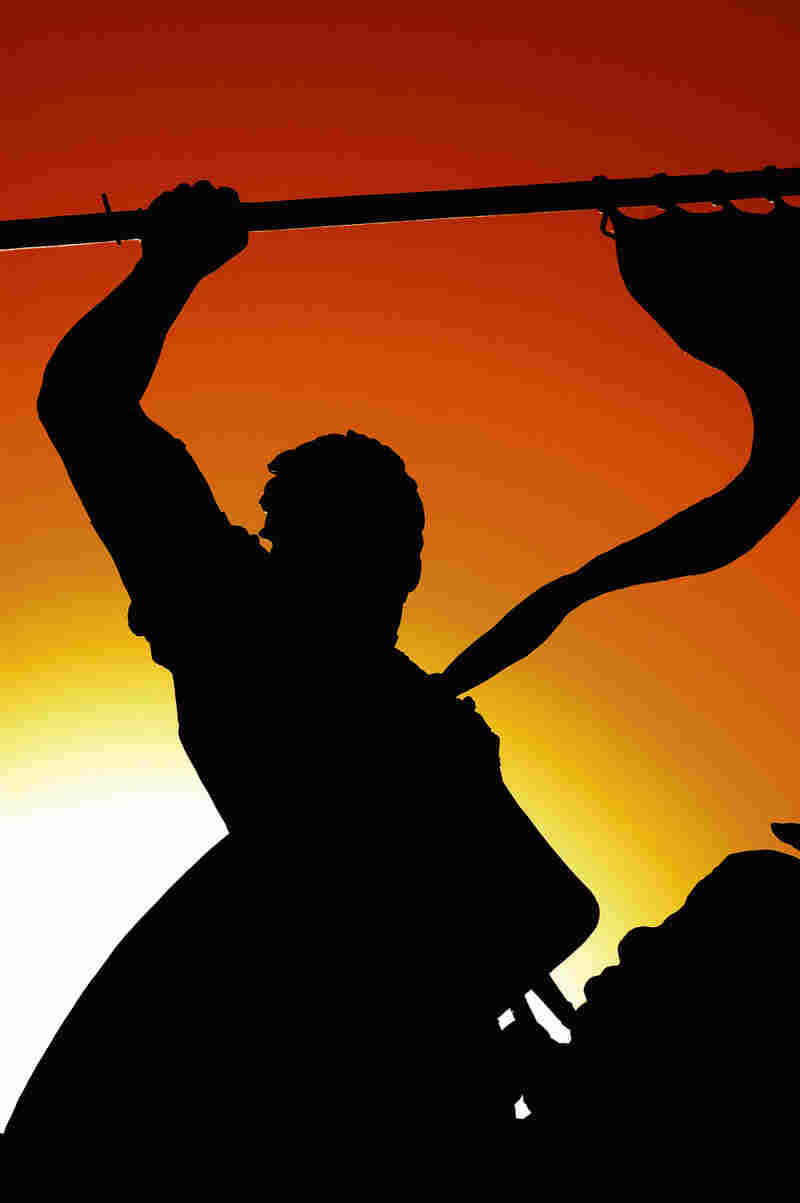 At the beginning of his book The Dangerous Book of Heroes, author Conn Iggulden writes, "There is a moment in some lives when the world grows still and a decision must be made ... at such moments, there is no one to save you."

Iggulden wrote the best-selling, "Dangerous Book for Boys" -- which offered instructions on how to build a tree house, tan a hide and build a soapbox racer -- with his brother Hal. He wrote his latest with another brother, David, and says he intended to inspire young boys and girls with tales of men and women who -- when history and circumstance called upon them -- responded to difficult moments with grace and pluck.

But before anyone could be inspired, criteria had to be laid down. A hero, in Iggulden's estimation, is "one who inspires us. One who has courage and possibly just a bit of style." What a hero didn't need to be, he says, was faultless. "They had to have an unusual life, to be part of great changing times, and to some extent show what you can do with a single life."

To that end, The Dangerous Book of Heroes includes many fighters, with chapters on George Washington (perhaps a curious selection for a British author), Daniel Boone and the Royal Air Force fighters who won the Battle of Britain against the Germans in 1940. 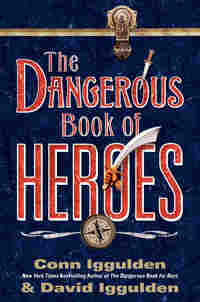 The women of the Special Operations Executive, a covert military organization sometimes known as "Churchill's Secret Army," might be less well known, but their inclusion is a highlight of The Dangerous Book of Heroes. "They were often parachuted into France during World War II to act as radio operators and to liase with resistance people on the ground," Iggulden says. "They carried code books and if they were caught they were guaranteed to be tortured for that information and they knew this. ... This was a very sad one to write because there is no happy ending for this. These are young women, these aren't young male soldiers carried away on dreams of glory. It was often difficult, unpleasant work, in terrible fear of the knock on the door at any point, and then finishing in a very grim way for many of them. But they did it, and I wanted to keep that aspect of courage in the book."

One person who was selected for something other than his fighting prowess was Harry Houdini.

But Houdini finally made the cut, perhaps, for more nostalgic reasons. "He was a personal hero of mine when I was a boy," Iggulden says. "I absolutely loved the idea of escapology and had a good go at it and ended up like a lot of children, tied up in ropes and having to call for help."

Others in the book were included to demonstrate the unusual circumstances under which they excelled. Florence Nightingale brought new innovations to the field of nursing under horrific conditions, but Iggulden says that her inclusion was based partly on her own bravery, but also on the bravery of everyday people who fought in wars of her time. "If you were lucky enough not to be killed but only to be wounded, you were entering a horrific world, which she did her best to improve, and I thought that was worth putting in," Iggulden says.

The chapter on the passengers of United Airlines Flight 93, which was hijacked on Sept. 11, 2001, and then brought down in a field in Pennsylvania, made it into the book because taking the plane back from the terrorists was an act of "extraordinary courage by a group of people who were completely ordinary. They were just passengers on a plane and almost all of us have been passengers on a plane at some point." Their particular circumstances, Iggulden says, made their actions even more remarkable.

"The thought of having 35 minutes to realize that you're in serious trouble, realize it's a hostage situation, but you're not going to be taken down and negotiated for, and in fact if you don't act, everyone is going to die and possibly the plane will be used as a weapon. They were the only flight in the air that day that had that information in time to act on it. That is an extraordinary thing and it's inspiring because they were flying on that particular day without realizing it was the last day of their lives." 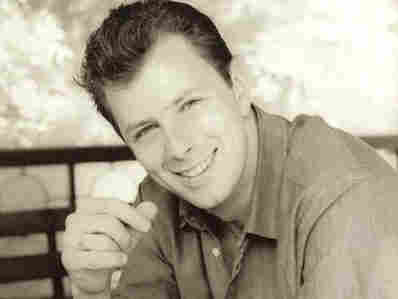 Conn Iggulden is the author of The Dangerous Book for Boys and other best-sellers including Wolf of the Plains. He lives in England. Nigel Spalding hide caption

Iggulden says that in an era -- and a part of the world -- where we are not often confronted with dangerous circumstances (note the prevalence of the phrase "exit strategy") the meaning of heroism has changed -- but it hasn't disappeared.

"It's a different world now, in many ways. The value of a human life, has, frankly, gone up in the West. And that has to be a good thing. That has to be something we can be proud of. So that when we lose a single soldier, his name is on the news across the land, across the world," Iggulden says. "Thankfully, we still do value bravery as an essential characteristic. It's almost the oldest human activity to sit around a campfire and say, 'This is a story of a brave man, we value this. If you grow up to be cowards, you will be less than an impressive human being.' And I think that if we are cowards, then it does rather shame the memories of those people who weren't, if they were able to hear us."

The Almighty created in the Gurkha an ideal infantryman, indeed an ideal Rifleman, brave, tough, patient, adaptable, skilled in fieldcraft, intensely proud of his military record and unswerving loyalty. Add to this his honesty in word and deed, his parade perfection, and his unquenchable cheerfulness, then service with the Gurkhas is for any soldier an immense satisfaction.
-- Field Marshal William Slim

The father of the authors of The Dangerous Book of Heroes flew in Bomber Command during World War II and later in the Fleet Air Arm. One of his jobs was training parachutists, and he tells a story of a group of Gurkhas, fresh to England from Nepal to begin their training. The Gurkha soldiers spoke no English, and their senior officer only understood a few words. After a final lecture, they were taken up in a plane for the first practice drop. Even at that late stage, the RAF crew weren't at all sure the soldiers had understood what was going on. One of them went back to the waiting Gurkhas and tried to explain once more.

"We are rising to an altitude of five hundred feet," he said, "at which point, a green light will come on and you and your men will jump." He mimed jumping.

The Gurkha officer looked worried but went back to his men to explain. When he returned, he said: "Five hundred feet is too high. We are willing to try three hundred feet."

The RAF officer went pale. "You don't understand," he said. "At three hundred, your parachute will barely have time to open. You'll hit the ground like a sack of potatoes."

The Gurkha officer beamed at him and went to tell the men. They all beamed as well. They hadn't realized they would be allowed to use the parachutes at that stage of the training.

Now that story must surely seem apocryphal, but it was told at the time and it demonstrates how the British armed forces saw the regiments from Nepal-keen, tough, uncomplaining, and unbelievably courageous. They have always been held in the highest regard, a respect they have earned time and time again in their history.

The Gurkhas have been part of the British army for almost two hundred years, beginning in 1816 when the British East India Company signed the peace treaty of Sugauli with Nepal, which allowed them to recruit local men. Gurkhas had fought them to a bloody standstill on a number of occasions, and the company was very keen to have such a martial race on its side. Lieutenant Frederick Young was one of those fighting the Gurkhas in 1815. His troops ran away, and only he refused to run as he was surrounded. The Gurkhas admired his courage and told him: "We could serve under men like you." He is known as the father of the Brigade of Gurkhas. He later recruited three thousand of them and became the commander of a battalion, later named the Second King Edward VII's Own Gurkha Rifles. They still serve today as part of the Royal Gurkha Rifles.

Gurkhas are drawn from a rugged and inhospitable land, the sort of herdsmen who must once have formed the backbone of Genghis Khan's armies. They are famous for carrying the kukri, a curved knife that, once drawn, must be blooded before it can be sheathed. 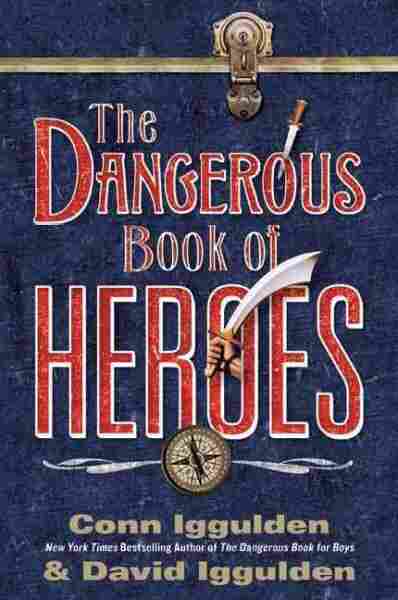 The Dangerous Book of Heroes

by Conn Iggulden and David Iggulden