Accessibility links
Drilling Advocate Frustrated By Handling Of Oil Spill Environmental consultant Tom Hutchings thinks BP and the government should be doing more to live up to the assurances that convinced him to support offshore oil and gas development. But despite the environmental disaster, he says it's unrealistic to stop offshore drilling now. 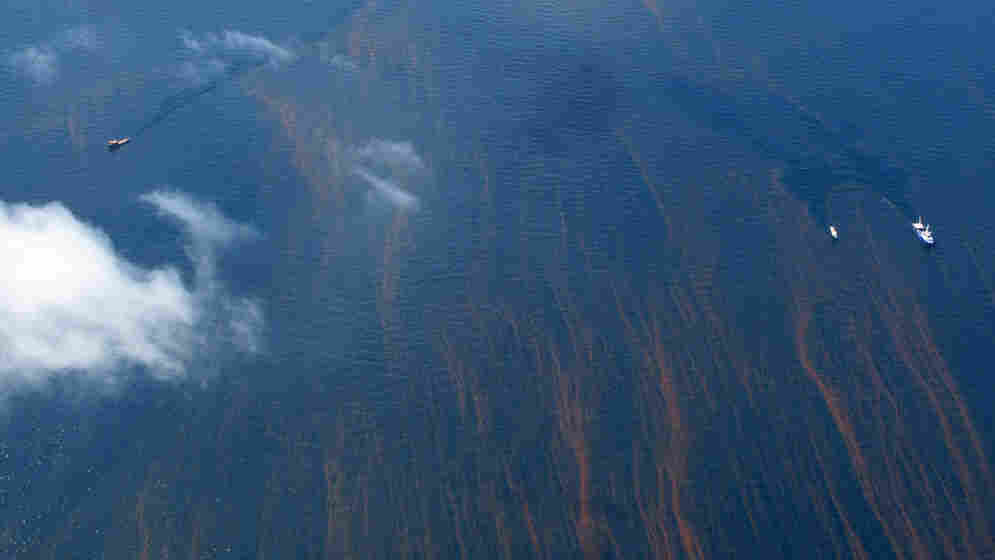 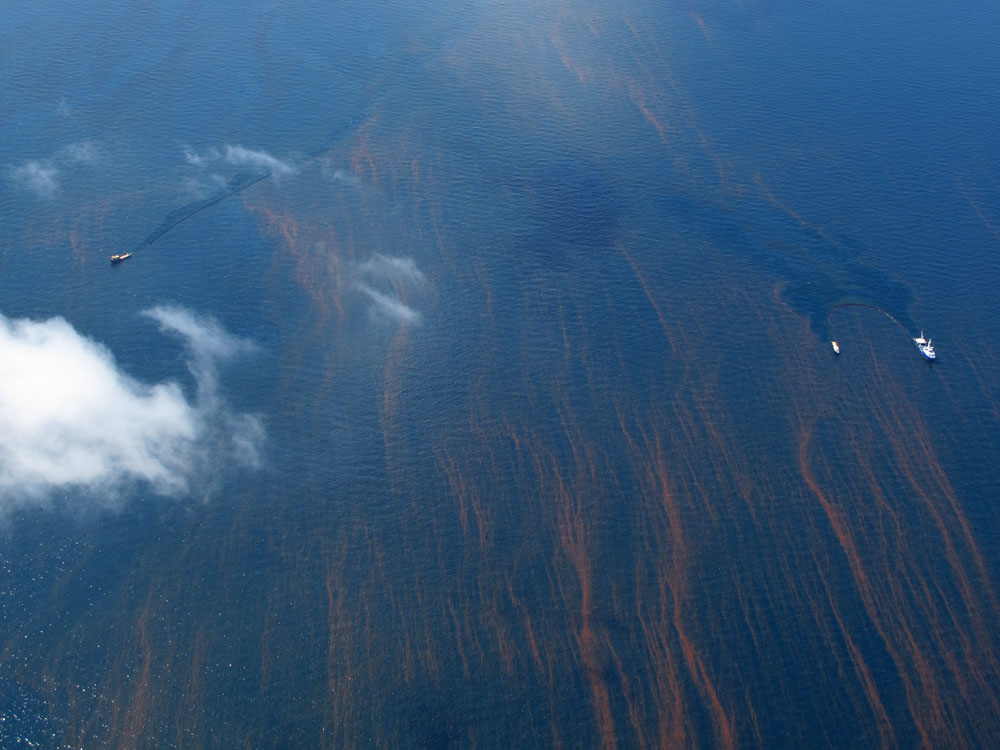 The Gulf's blue waters are streaked with reddish tendrils of oil.

As thick oil coats Louisiana's fragile marshlands, there's growing frustration with BP's inability to stop a gusher in the Gulf of Mexico and the government's oversight of the environmental disaster. Fed up with the response, one man who pushed for offshore drilling is rethinking his role in the tragedy. 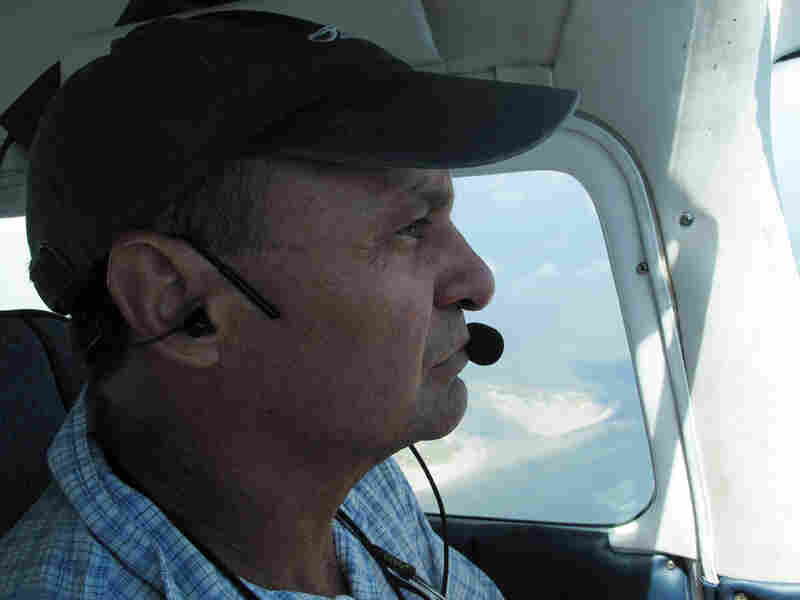 "I was kind of on the bandwagon," environmental consultant Tom Hutchings says. "I was drinking the company Kool-Aid." Debbie Elliott/NPR hide caption 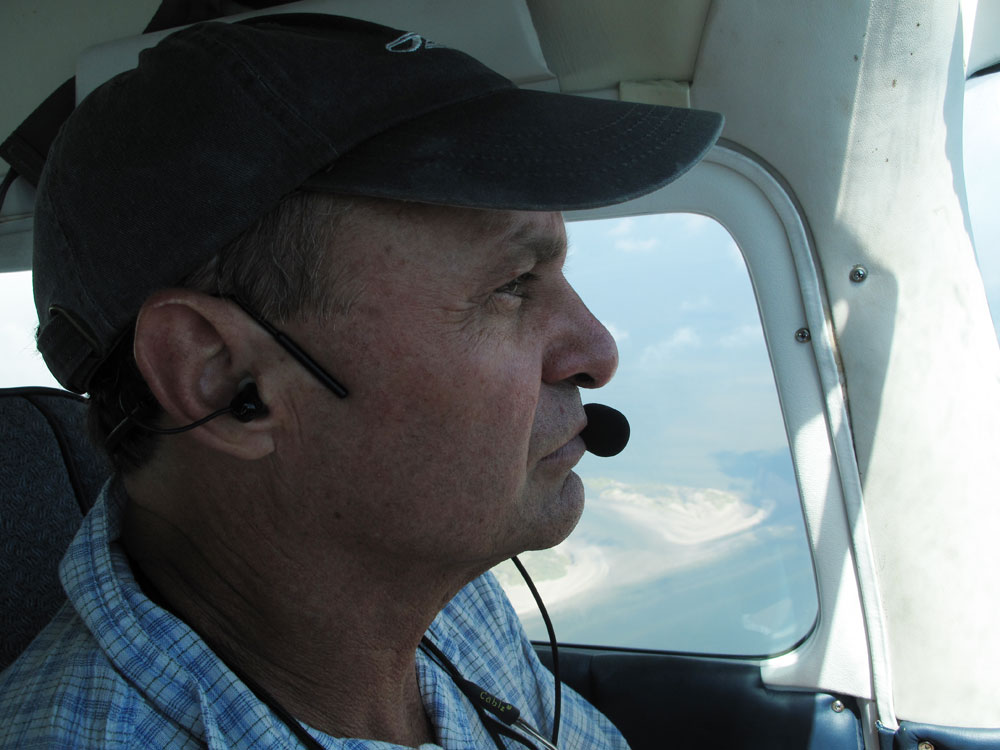 "I was kind of on the bandwagon," environmental consultant Tom Hutchings says. "I was drinking the company Kool-Aid."

Tom Hutchings is flying south over Mobile Bay, into the Gulf of Mexico. It's his sixth such flight since the Deepwater Horizon oil rig sunk more than a month ago.

About 40 miles south of the Alabama coast, he points to a line of sheen glistening in the morning sun. It turns brighter, becoming strands of pinkish crude as his plane nears the site of the oil rig explosion. The strands get thicker and darker.

"What I'm seeing now is different from what I've seen before," Hutchings says. "These large, dark, almost burgundy spots of oil. They look like blood, really."

Early on he saw a frothy mix. Now, pools and streams of the red oil streak the deep blue water.

"The whole sea is nothing but a reflection of the oil on top of it," he says. "That is not what the Gulf of Mexico should look like."

Hutchings is an environmental consultant who typically works with industries to manage environmental risk. He's spent his career forging the middle ground between economic and environmental interests. He lives in Montrose, Ala., on the red clay bluffs that line the eastern shore of Mobile Bay.

"Stories go back to where people supposedly sat on this particular bluff and watched Admiral Farragut and his troops come up the bay," he says. "I'm really hoping the defenses at the mouth of the bay are a little better than they were in the Civil War. But it's distressing, it's permeating. It's touched me from the moment I saw that rig on fire."

And ever since, his frustration has grown in proportion to the amount of oil that's spewing from the sea floor. He doesn't understand why BP can't stop the leak.

BP's first attempt to curtail the flow with a containment dome failed. A tube inserted into a leaking pipe has diverted some oil, but it's not clear what proportion of the daily spillage that is. BP and the Coast Guard have said 5,000 barrels a day are spewing into the Gulf, but scientists tell NPR it could be 10 times that amount or even more.

Last week, BP Chairman Tony Hayward told Sky News that the company was having success getting control of the spill. "Everything we can see at the moment suggests that the overall environmental impact will be very, very modest," he said.

Hayward also told the Guardian that the Gulf of Mexico is "a very big ocean, and the volume of oil we are putting into it is tiny in relation to the total water volume."

Hutchings disagrees. "If a BP exec wants to call something tiny," he says, "call the effort tiny."

Hutchings thinks BP and the government should be doing more -- living up to the assurances that convinced him to support offshore oil and gas development.

"I was kind of on the bandwagon," he says. "'Hey, it's safe.' I was drinking the company Kool-Aid. They had the safety regulations in place. Everybody was touting no risk to this, no risk to that."

Even with the looming threat, Hutchings says it's not realistic to stop offshore drilling now. But he doesn't think the industry should be able to push the frontier in such deep water until the safety technology catches up. He says that's where the government has failed.

"We've not been able to say no to apparently any oil industry request," he says. "That's not what I think EPA is for, Coast Guard is for, that's not what our government is for."

Administration officials are defending BP's response to the disaster. White House Press Secretary Robert Gibbs had a lengthy and somewhat testy exchange with reporters on Friday.

"There's nothing that we think can and should be done that isn't being done," Gibbs said. "Nothing."

From his plane over the oil-streaked Gulf of Mexico, Hutchings is disheartened. "This thing is huge. Out of control," he says. "The truth is, they don't know how to stop it."