Accessibility links
Mental Health Apps: Like A 'Therapist In Your Pocket' Sophisticated phone apps being developed for the mental health field can serve as a bridge between periodic therapy sessions. They're a sort of 24-7 mobile therapist that can help with everything from quitting smoking to treating anxiety to detecting relapses in psychotic disorders. 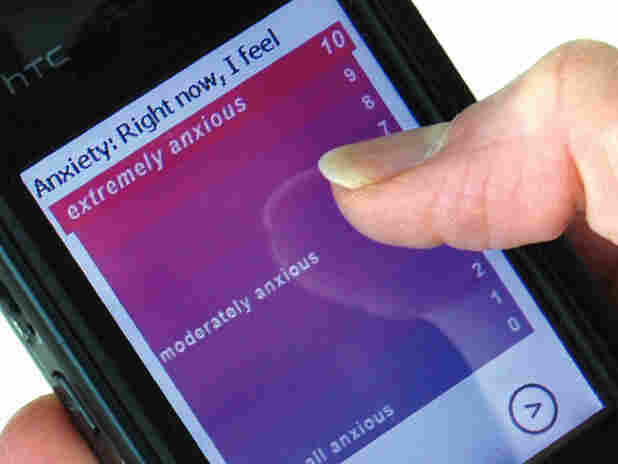 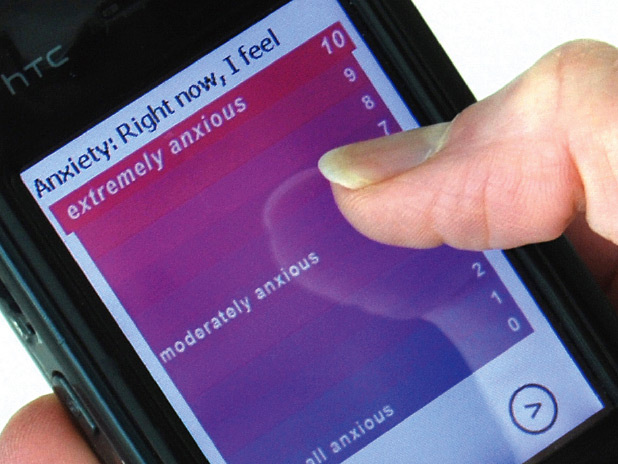 As the computing power of cell phones increases, more and more sophisticated mobile apps are being developed for the mental health field. They're seen as a way to bridge periodic therapy sessions -- a sort of 24-7 mobile therapist that can help with everything from quitting smoking to treating anxiety to detecting relapses in psychotic disorders.

These mobile technologies let users track their moods and experiences, providing a supplemental tool for psychiatrists and psychologists.

"It gives me an additional source of rich information of what the patient's life is like between sessions," says University of Pennsylvania researcher Dimitri Perivoliotis, who treats patients with schizophrenia. "It's almost like an electronic therapist, in a way, or a therapist in your pocket."

Here's how one of the apps, called "Mobile Therapy," works: Throughout the day at random times, a "mood map" pops up on a user's cell phone screen. "People drag a little red dot around that screen with their finger to indicate their current mood," says Dr. Margaret Morris, a clinical psychologist working at Intel Corp. and the app's designer. Users also can chart their energy levels, sleep patterns, activities, foods eaten and more, she says.

Morris designed the app, which can be downloaded onto most cell phones, to try to help people manage the stress of everyday life, to improve their mental health and reduce the risk of cardiovascular disease.

Based on the information entered by the user, the app offers "therapeutic exercises" ranging from "breathing visualizations to progressive muscle relaxation" to useful ways to disengage from a stressful situation, Morris says. And the information the app captures can later be charted, printed out and reviewed. The idea is that users can look at a whole week of mood data to see if there are any connections between their mood and other factors happening in their lives, and record it into the app.

Morris' Mobile Therapy app has been beta-tested in 60 people, and "everyone who used it described new insights about their emotional variability" and said it helped reduce their stress, she says.

Her research was recently published in the Journal of Medical Internet Research, where she writes that by using the app, participants were able to increase "self-awareness in moments of stress, develop insights about their emotional patterns and practice new strategies for modulating stress reactions."

Typically, patients will bring their paper charts into their therapist to discuss them during their weekly therapy session. But many patients -- especially teens -- balk at doing the CBT homework, and many stop doing it.

Knowing this, researchers Gavin Doherty and Mark Matthews at Trinity College in Dublin developed a cell phone app that's being tested by a couple of dozen therapists throughout Ireland.

Delahunty, one of the testers of the "mobile mood diary," says it's a very useful tool.

"From a clinical point of view, I've found it a huge improvement over the pen-and-paper technique," Delahunty says. He adds that his young patients love the app and rarely miss doing their daily homework. They're pleasantly surprised that they can use their cell phones to help themselves in therapy. And when they come into therapy, he says, "You get a complete printout of their mood, their energy level, their sleep patterns, and any comments they've made over the week or two. And then you can put that down on the table in front of you, and use it to discuss the therapy with the young person."

Because teens are so comfortable with texting, Delahunty adds, "I'm getting more comments. And in some cases, it's really like narrative therapy, where you'd be getting a paragraph of text for each day, which brings out a richness in the therapy situation that you can explore then."

Another mental health app under development, called CBT MobilWork, is tailored to adults with severe depression.

It's a collaboration between Judy Callan, a researcher at the University of Pittsburgh, and computer scientists at Carnegie Mellon University that Callan hopes to adapt for use in mental health programs for anxiety, phobias, eating disorders and more.

Callan describes how a typical patient might use this app, which tailors CBT homework to each user: "Say a patient just starts therapy and they're really depressed and they can hardly get out of bed. One of their homework assignments might be to, each day, just make your bed," Callan says.

Once the patient has successfully accomplished that task, the homework on the phone app will change, prompting and coaching the patient to take the next step.

There's also an app for one of the most intractable mental disorders: schizophrenia, which affects 1 percent of the U.S. population. It's for these patients that the University of Pennsylvania's Perivoliotis is developing innovative mobile technologies: palm-sized computers that chart a patient's moods and activities, for example; and a digital watch that has personalized scrolling messages. The messages on the watch can instruct a patient who hears voices, for example, to do exercises like deep breathing or muscle relaxation "to reduce the stress triggered by their voices," he says.

"One of our patients came in with chronic, constant auditory hallucinations that really controlled his life," Perivoliotis recalls. "The voices would threaten him that if he would go outside and do fun things, then terrible, catastrophic things would happen to him. He felt really enslaved by them. He felt no sense of control whatsoever."

So the therapist taught the patient a few simple behavioral exercises to reduce the severity of the voices. It's an exercise called the "look, point and name technique," Perivoliotis explains. "When a patient starts to hear voices, he applies the technique by looking at an object in the room, pointing to it and naming it aloud. He repeats this until he runs out of things to name."

Perivoliotis says "the technique usually results in reduced voice severity [i.e., the voices seem quieter or pause altogether], probably because the patient's attention is redirected away from them and because speaking competes with a brain mechanism involved in auditory hallucinations."

So the mobile therapy watch that this patient wore was programmed to remind him a few times a day to practice this technique to control the voices.

"It really did the trick," Perivoliotis says. The voices were dramatically reduced. "It kind of broke him out of the stream of voices and his internal preoccupation with them."

Exercises like these not only give the patient temporary relief from distressing symptoms but also, importantly, "they help to correct patients' inaccurate and dysfunctional beliefs about their symptoms -- from, 'I have no control over the voices,' to, 'I do have some control over them,' " Perivoliotis says.