Accessibility links
Citizenship-By-Birth Faces Challenges The Constitution says all persons born in the U.S. are American citizens. But some lawmakers say that shouldn't apply to children of parents here illegally. They've introduced bills meant to trigger a legal battle about the issue. 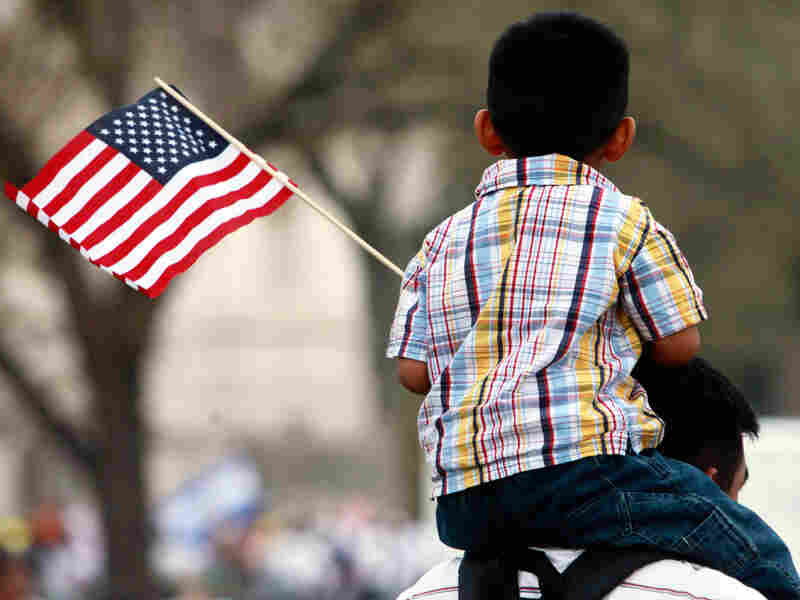 A child is held above the crowd as people march by the U.S. Capitol during a rally in support of overhauling immigration laws on March 21. Jacquellyn Martin/AP hide caption 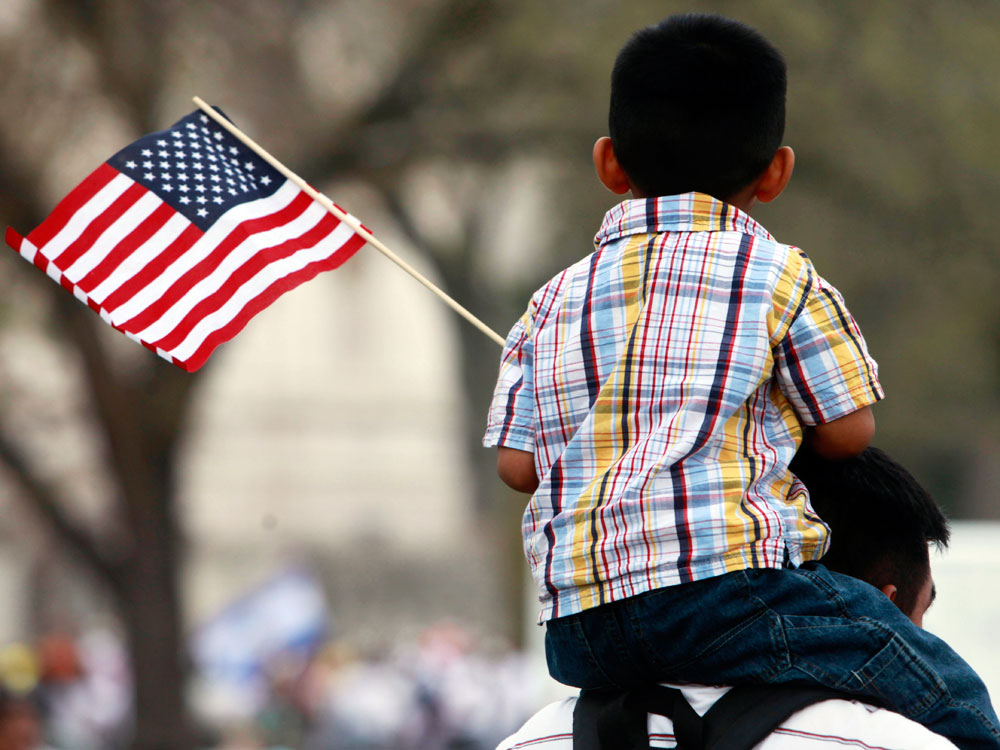 A child is held above the crowd as people march by the U.S. Capitol during a rally in support of overhauling immigration laws on March 21.

If you're born in the U.S.A., you're an American citizen. Some lawmakers, however, plan to challenge that basic assumption.

In what might be the next great flash point in the nation's ongoing debate about immigration policy, legislation has been introduced in Congress and a pair of states to deny birth certificates to babies born of illegal-immigrant parents.

"Currently, if you have a child born to two alien parents, that person is believed to be a U.S. citizen," says Randy Terrill, a Republican state representative in Oklahoma who is working on an anti-birthright bill. "When taken to its logical extreme, that would produce the absurd result that children of invading armies would be considered citizens of the U.S."

Bills to challenge the fact that citizenship is granted as a birthright in this country have been perennial nonstarters in Congress, although the current legislation has 91 co-sponsors. As with other issues surrounding immigration, however, some state legislatures still might act, if only in hopes of bringing this issue before the Supreme Court.

"That was the primary purpose of the bill, for someone to sue us in federal court, and let's resolve this issue once and for all," says Texas state Rep. Leo Berman, a Republican who has introduced a bill to deny birth certificates to the newborn children of illegal immigrants. "I believe we are giving away 350,000 citizens a year to children born to illegal aliens."

What The Constitution Says

Berman faces an uphill battle. For more than a century, courts have held that citizenship is granted to anyone born within the territory of the United States.

The 14th Amendment, which was ratified in the wake of the Civil War, overturned the Dred Scott decision, clarifying that the children of former slaves were citizens and entitled to constitutional protections: "All persons born or naturalized in the United States, and subject to the jurisdiction thereof, are citizens of the United States and of the State wherein they reside."

Since then, courts have made it clear that this applies to the children of American Indians and Chinese guest workers, among other groups. The principle of birthright citizenship has never been successfully challenged, according to immigration lawyers.

But the federal courts have never specifically addressed the question of whether children born to those in the country illegally should be entitled to citizenship, says Michael M. Hethmon, general counsel of the Immigration Reform Law Institute, which favors tighter restrictions on immigration and has advised the state legislators on their efforts.

Berman says the 14th Amendment was meant to clarify the status of freedmen and "does not apply to foreigners. The 14th Amendment, which is being used to provide citizenship, is the last thing that should be used."

Subject To What Jurisdiction?

The authors of the 14th Amendment, he argues, intended to make citizenship contingent on allegiance to the country. The congressional debate at the time makes it clear that this did not apply to foreigners, Berman says.

"There cannot be a more total or forceful denial of consent to a person's citizenship than to make the source of that person's presence in the nation illegal," Lino A. Graglia, a professor at the University of Texas law school, wrote in a law review article last year. "This would clearly settle the question of birthright citizenship for children of illegal aliens."

Many other lawyers say that's a false reading. "Of course they're under our jurisdiction," says Michele Waslin, senior policy analyst with the American Immigration Council, which works to protect the legal rights of immigrants. "If they commit a crime, they're subject to the jurisdiction of the courts."

'Who Is An American?'

Not every nation grants citizenship as a birthright. Sometimes it is an inheritance from one's parents, based more on blood than land.

But challenging the traditional expectation that anyone born within the physical territory of the U.S. is automatically a citizen represents a "major change in a bedrock principle that has lasted for decades," says Karen Tumlin, managing attorney for the National Immigration Law Center, a public interest legal group based in Los Angeles.

"It's a core American belief that those who are born here get integrated into our society, no matter where your parents are from," she says. "This would be an erosion of the core principles about who belongs in this country."

That's precisely the argument opponents of birthright citizenship want to start. If a law denying birth certificates to the children of illegal immigrants passes -- and it's written in such a way that it gets argued in federal court, rather than being dismissed out of hand -- it will have more of a "galvanizing effect" than the recent passage of a strict anti-immigration law in Arizona, says Hethmon, general counsel of the Immigration Reform Law Institute.

"All the interested parties, which in the case of birthright citizenship includes everyone in the country, would have to respond to it, either supporting it or opposing it," Hethmon says. "Who is an American? If that question can't be answered, it's hard to conceive of a greater constitutional crisis for a democratic republic."

A previous version of this story incorrectly said courts have ruled that the children of visiting diplomats are eligible for U.S. citizenship if they are born in the country. Such children are in fact not granted citizenship.