Accessibility links
Cut Him Some Slack: Dudamel's Hype Turns To Drubbing Gustavo Dudamel, the charismatic new music director of the Los Angeles Philharmonic, just capped his first U.S. tour with the orchestra. For the most part, critics have not been as ecstatic as the sold-out crowds.

Cut Him Some Slack: Dudamel's Hype Turns To Drubbing

Cut Him Some Slack: Dudamel's Hype Turns To Drubbing 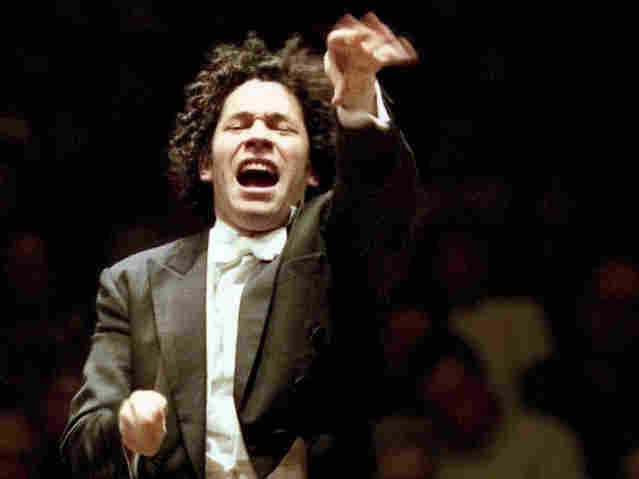 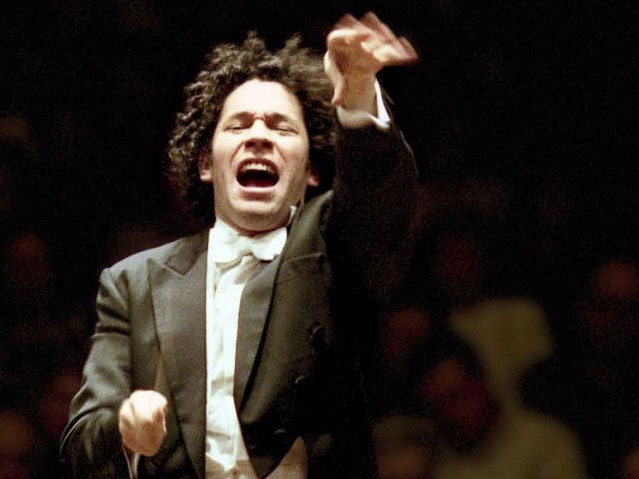 Gustavo Dudamel leads the L.A. Philharmonic in music by Mahler from the opening-night concert at Walt Disney Concert Hall, Oct. 8, 2009.

Well, the critical votes are in, and they're not so favorable for Gustavo Dudamel, the charismatic young music director of the Los Angeles Philharmonic. Dudamel just capped off his first U.S. tour with the orchestra.

Even before Dudamel, 29, took over the reins of the L.A. Phil last fall, the Venezuelan "wunderkind," as he has been repeatedly labeled, was touted as "the savior of classical music." The hype has been impressive, even earning him a feature spot on CBS's 60 Minutes, in a piece titled "Gustavo the Great."

But great also are the expectations.

The critics in San Francisco, Chicago, D.C., Philadelphia and New York -- cities where the "Dude" (another nickname) and his orchestra touched down -- were mostly unanimous in pointing out significant problems.

Dudamel's performance of the war horse Symphony No. 6 by Tchaikovsky received the most drubbing. Anthony Tommasini, of the New York Times, called it "rough and unfocused," while the San Francisco Chronicle's Joshua Kosman noted its "rhythmic and balance problems" and John von Rhein, from the Chicago Tribune, said it was simply "a disappointment." The one positive view came from the Washington Post's Anne Midgette. She identified "slurs" and "stumbles" in the performance, but nevertheless characterized it as one of the "most involving and compelling" performances she'd ever heard.

And, while there was praise for Dudamel's expressiveness and charisma, and his ability to handle big, complex scores (he also took John Adams' City Noir on tour), a darker notion was also lurking, which Peter Dobrin of the Philadelphia Inquirer chose to highlight in his review.

"The most cynical listener," he writes, "figures that the Los Angeles Philharmonic has recalculated aspects of the [conductor's] job once considered ancillary (community relations, education, fund-raising) as primary now, and a winsome persona is more important than revelatory interpretations."

Dobrin goes on: "I'd rather think that the Los Angeles board, administration and players really believe they have a great musical thinker on their hands. But that's not who Dudamel is -- not now, at 29, and not Wednesday night in Verizon Hall."

At this early stage, I prefer to be more hopeful. I, too, was amid the screaming throng at Dudamel's sold-out Washington concert. And, while less enthusiastic about the Tchaikovsky than Midgette, I scored it a win for Dudamel in Leonard Bernstein's "Age of Anxiety" Symphony. He made as good a case as one could possibly make for a troublesome, rambling score of many flavors that came to life brilliantly. Full disclosure here: NPR Music webcast Dudamel's opening-night L.A. Phil concert last fall, and has featured other concerts by the orchestra.

The real test, I suppose, will come in time, as Dudamel chooses, balances and performs a variety of standard repertoire and new pieces week in and week out.

"The savior of classical music" has only been on the job for seven months. Give him a break. He hasn't yet learned to walk on water.