Accessibility links
Some Recent Grads Face Health Care Coverage Gap Despite a health care overhaul provision that allows young adults to stay on their parents' health plans until age 26, many 20-somethings and their families are discovering that when that coverage begins varies. It creates what the new health care legislation was supposed to eradicate: health care haves and have-nots. 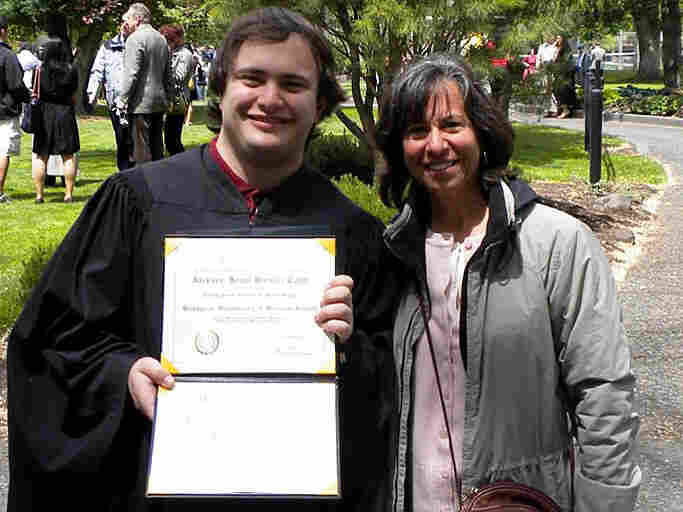 June Blender found out that her employer wasn't going to enroll newly eligible young adults like her son Jackson Cahn until the next open season for benefits this fall. Courtesy of June Blender hide caption

When it comes to health care, even the simplest things can get very confusing.

So it is with the new health law's requirement that young adults be able to remain on their parents' health plans until they turn 26. But when exactly the new benefit begins, who exactly is eligible and who decides all have the same answer: It depends.

It depends who your insurer is, who your employer is and who makes the decision about what kind of benefits you get on the job.

Robin Byrne is one of the lucky ones. She's getting to stay on her mother's plan with no break.

The 22-year-old just graduated from Gettysburg College in Pennsylvania, with a degree in economics and international affairs. She's off to do a Fulbright fellowship this fall, studying in Muscat, Oman. But between now and then, she'll need health insurance.

"I have asthma," she says. "It's very mild, but it does mean I have to buy inhalers. And they're not terribly expensive. But out of pocket they would certainly be more expensive than with our prescription coverage."

The good news for Byrne is that her mother's health plan -- which comes from a local government job in New Jersey -- is going to continue to cover her both before and after her fellowship. Byrne says the security of knowing she'd be able to stay on her mom's plan gave her more freedom to pursue her career goals.

"Knowing I would be covered, I felt a little bit more comfortable applying to not necessarily riskier programs, but programs that may or may not have extended health insurance, rather than just looking for traditional employment," she says.

That was true for some of her friends as well, she added.

But things haven't gone quite so smoothly for everyone finishing college this spring. Jackson Cahn graduated last weekend from Whitman College in Walla Walla, Wash. The biochemistry and biophysics major is taking a year off to teach before pursuing graduate studies.

Jackson's mom, June Blender, says she was delighted when the provision letting young adults stay on their parents' health plans remained in the bill that was signed into law. But then she found out that her employer, Microsoft, wasn't going to enroll newly eligible young adults like Jackson until the next open season for benefits this fall.

While her benefits are great, says Blender, that gap left the family in a bit of a bind.

"The open season begins in November. But he graduates on the 23rd of May, so there's a significant gap in his insurance," she says.

And because Jackson, like Robin Byrne, has asthma, buying even temporary insurance on the open market probably isn't an option.

But this story has a happy ending, too. It turns out that Jackson can qualify for his stepfather's insurance starting in June, until he can get back on his mom's plan next January.

Who Makes The Call

Still, what looks like a fairly simple element of the new health law -- letting young adults stay on their parents' health plans -- turns out to be anything but.

Young Adults Among The Most Likely To Need Insurance

Young adults between ages 19 and 29 have the highest rate of uninsurance among any age group, according to census figures. In 2008, they accounted for 30 percent of the 46 million Americans under age 65 without health insurance, even though they make up less than 20 percent of that population.

And despite their relative good health, the consequences of going without insurance can be serious, according to a new report by The Commonwealth Fund.

The report, which surveyed a nationally representative sample of 19- to 29-year-olds in 2009, found that more than three-fourths of those without insurance reported not getting needed medical care because of the cost.

Of those who did seek care, about 60 percent of those without insurance reported problems paying medical bills, and an estimated 11.3 million young adults — both insured and uninsured — said they were paying off medical debt. Of those, half had turned to parents or other family members for help, nearly a third were forced to put off education or career plans, and 39 percent were unable to meet other debt obligations, such as paying off school loans.

One reason the whole thing has gotten so confusing is that the decision about when to start the new benefit is being made by lots of different players in the health system.

For example, many health insurance companies have decided to begin offering the coverage to graduating college students in June. That's earlier than the law requires. But for most people with insurance at work, it's not the insurance company that decides what their benefits are. It's the employer.

"For all of the Americans that have coverage through an employer -- and that's about 160 million Americans -- roughly two-thirds of that number are with a self-insured employer," says Paul Dennett, senior vice president for health care reform at the American Benefits Council, a trade group for large employers.

As a result, "the card that's in their wallet may be indistinguishable from a card that looks like a card from an insured plan," Dennett says.

Most of the time, he says, "it's a distinction without a difference" in terms of how benefits are delivered.

Falling Into The Gap

According to the new law, health plans are required to start offering coverage to young adults who are no longer students starting on the first policy renewal date after Sept. 23. For many plans, that will mean Jan. 1 of next year.

That will leave a multimonth gap for a lot of graduating college seniors. But Dennett says employers that decide to wait may be concerned about the requirement that they offer coverage to every young adult up to age 26, not just this year's graduating class.

Big Health Insurers Have A Gift For College Grads April 19, 2010

"The law will also apply to individuals who aren't on the plan right now because they graduated a year or two ago, and lost coverage under their family's plan -- or maybe never elected it at all -- who will have that new opportunity to do so," he says.

He adds, "So as a matter of simplicity and fairness to everyone who'd be eligible for coverage up to age 26, many employers are figuring the best way to do that will simply be this fall, when open enrollment is available to all of those individuals and they can do it all at once."

Of course that means that, at least in the short run, it will create exactly what the new law is suppose to get rid of: health care haves and have-nots.