Accessibility links
As BP Backlash Grows, So Do Calls For Boycott Oil has gushed into the Gulf of Mexico for more than a month, and public anger at BP has taken the form of a nascent but growing campaign to boycott its products. But such efforts might not put a dent in company coffers. Experts say boycotts can be "a very loaded tactic."

As BP Backlash Grows, So Do Calls For Boycott

As BP Backlash Grows, So Do Calls For Boycott 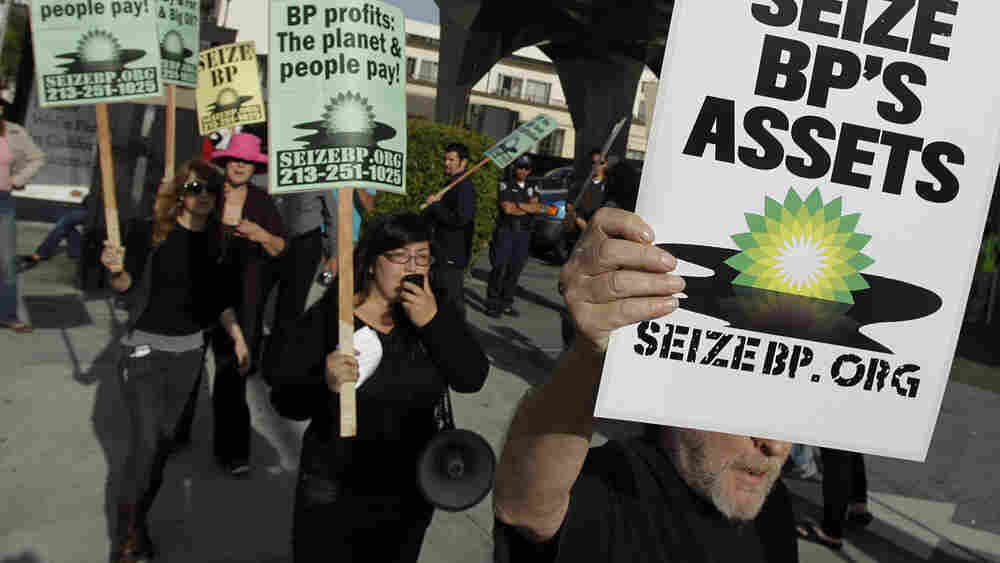 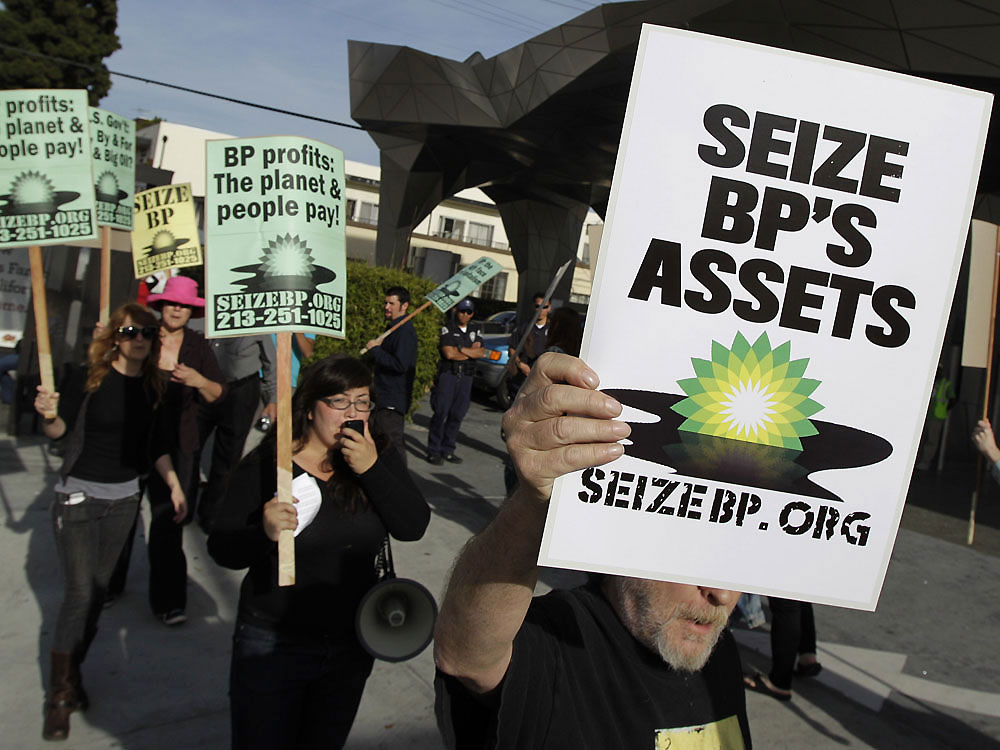 People critical of oil giant BP demonstrated outside an ARCO station during a rally earlier this month in Los Angeles.

As BP struggles to plug pipeline leaks that have spewed untold barrels of oil into the Gulf of Mexico, a torrent of public anger has spurred a small but growing campaign to boycott its products.

Chief Executive Tony Hayward and other BP brass have blitzed U.S. broadcast networks with the message that the company is doing all it can to stanch the crude now washing ashore in Louisiana, Mississippi and Alabama. But that's done little to reassure people along the Gulf Coast who fear their home states and livelihoods may be forever changed by a company that has spent millions creating a "green" image.

Such emotion has given rise to nascent boycott efforts on Facebook and Twitter, as well as traditional advocacy groups. A "Boycott BP" Facebook campaign urging consumers to shun BP stations and brands -- including ARCO, Castrol, Amoco, Safeway Gas and ampm -- has nearly 95,000 followers. A similar site has more than 3,000 followers.

We want to punish BP. We want to send a message that a company cannot just purchase an image that it is socially conscious.

The consumer watchdog Public Citizen also has stepped into the fray, with an online petition that asks people to "send a clear message to BP by boycotting its gas and retail store products" for what it calls the company's history of negligence. The group doesn't normally engage in boycotts but the call to do something in this case was overwhelming, says Tyson Slocum, director of the group's Energy Program.

"We want to punish BP. We want to send a message that a company cannot just purchase an image that it is socially conscious," Slocum says. He notes that Public Citizen's boycott effort isn't intended to punish individual gas stations and convenience stores, but rather target corporate headquarters.

But how effective would any boycott be against a company that was the world's fourth-largest last year?

The Problems With Boycotts

Twenty-one years ago, the Exxon Valdez spill in Alaska's Prince William Sound led to a one-day nationwide boycott of Exxon stations. But the campaign failed to dent corporate profits, because most of the stations were independently owned.

Greenpeace, which spearheaded boycotts against ExxonMobil in 1989 and 2002, has not called for similar action against BP after the April 20 Deepwater Horizon rig disaster that killed 11 people. One big reason is that it's hard to hit BP by boycotting individual filling stations, says Kert Davies, Greenpeace's point person on the oil industry.

"It's not as linear as we might like to think," Davies says, because most people assume there's a metaphorical pipeline that runs from BP wells to BP stations. "They don't make a lot of money selling their own gasoline to their own stations."

In fact, BP spokesman David Nicholas says all of the company's 11,700 filling stations in the U.S. have been sold off in recent years and are now independently owned and operated. "We supply the fuels and branding. That's it," he says.

Nicholas says he isn't aware of a boycott-related impact so far on any BP-branded gas stations.

Even if public ire could be surgically directed at BP, most consumers are concerned only about price when it comes to gas, says Lisa Merriam, a branding consultant who has worked with such companies as ExxonMobil and Johnson & Johnson.

"People don't pick gas based on brand," she says.

Recent research backs that up. Market research group NPD's Motor Fuels Index survey released last September found that only 28 percent of shoppers "always buy one brand of gasoline," and the number has been falling steadily.

As for getting people to focus on non-gas products at BP's convenience store chain, ampm, "that's tough," says Greenpeace's Davies. "Suddenly, you have to say that BP is ampm … [and] you're talking about a shrinking audience the further you get away from the brand they know."

You've got to give [the company] a very clear understanding of the consequences: what are you asking for, what is the exit ramp.

In any case, boycotts are "a very loaded tactic -- it's a hammer," Davies says. If the demands aren't clear, concise and achievable, he says, it's hard to make them effective.

"You've got to give [the company] a very clear understanding of the consequences: what are you asking for, what is the exit ramp, let them know you will boycott until they do X," he says.

Boycotts can also be too effective. Davies points to the 1960's grape boycott led by activist Cesar Chavez to highlight migrant workers' low pay and poor working conditions as an example. "It accomplished everything it set out to do," he says. "But even today you find people who still won't buy grapes."

Greenpeace and other advocacy groups think it's more effective to try to roll back offshore drilling than to target individual oil companies.

"We're saying that offshore drilling is dirty and dangerous and that the BP spill is just another example of that," said Anna Aurilio, who works on oil industry issues for Environment America, one of a dozen or so environmental groups that have called for an official ban on drilling.

Offshore platforms represent one-quarter of all U.S. oil and natural gas production. Since the Deepwater disaster, the Obama administration has called a halt to new drilling. A group of lawmakers has crafted a bill to put the entire Northwest coast off limits to oil exploration, and Florida's governor has pushed for a permanent ban on drilling in the state's coastal waters.

While consumer boycotts might not hurt BP's share of the U.S. gasoline market -- second only to Shell -- the company's "big problem will be in dealings with regulators and attracting good talent to the company," says Merriam, the branding consultant.

BP also will have a tough time repairing its public image, especially because of its efforts to brand itself green. Since 2000, the company has spent $200 million on a TV and print ad campaign called "Beyond Petroleum" intended to promote BP as environmentally protective.

"It was a really risky position to take -- it was always a matter of when this was going to happen," Merriam says of the Gulf spill. "If their marketing consultants didn't warn them, it was marketing malpractice."

"They really stepped out on that, and the rest of the oil industry wondered what they were doing," says Hofmeister, who is also the author of Why We Hate Oil Companies.