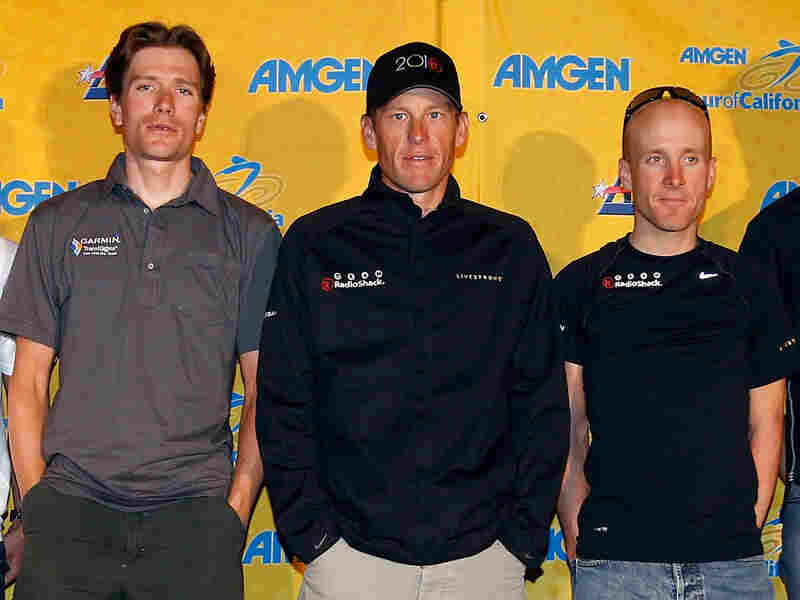 Accused: Floyd Landis has said that top U.S. riders David Zabriskie (from left), Lance Armstrong and Levi Leipheimer cheated during the Tour de France and other races. Here, they attend a press conference prior to the 2010 Tour of California. Chris Graythen/Getty Images hide caption 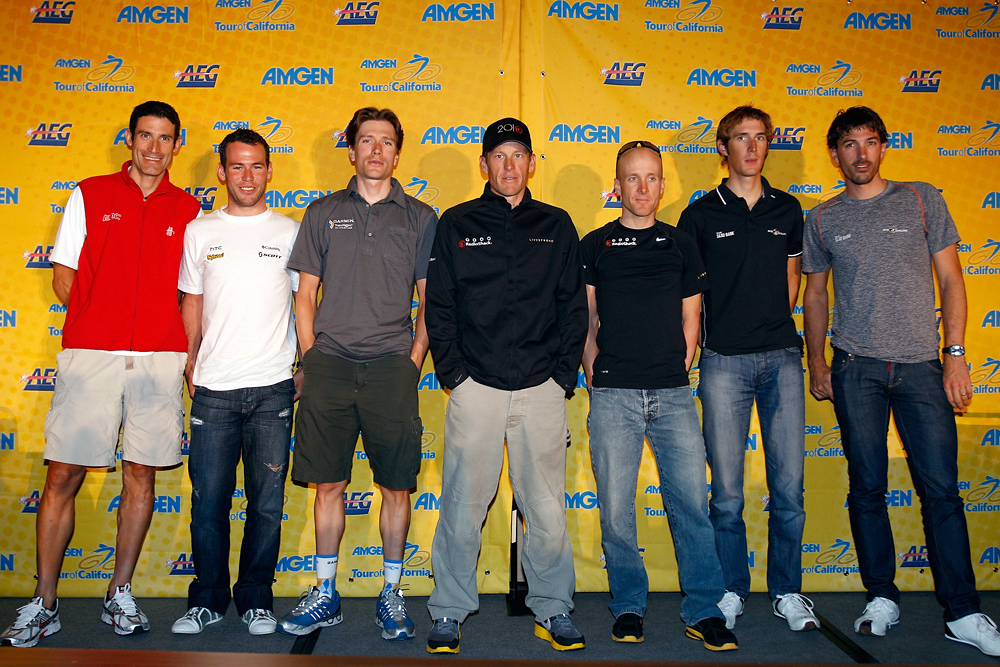 Been quite a time for doping revelations in sport -- although as well we know, athletes accused of taking illegal drugs are invariably just downright flabbergasted to find out what has gotten into their bodies by immaculate infusion.

The NFL defensive rookie of the year, one Brian Cushing, tested positive at the start of the season for a banned fertility drug that users employ to make steroids work more efficiently, but the NFL didn't bother to reveal this 'til after the season, and when it did, the reporters voted to let Cushing keep his ill-gotten award.

Some cynics might say that NFL writers, like the NFL and its players union, care naught for the integrity of the game -- so long as it's more popular and more violent. The league features a great many monster players who appear larger than the average John Deere tractor. But it still doesn't perform blood tests for human growth hormone, because this would mean sticking these poor behemoths with a widdle needle.

Then we have Floyd Landis, who was stripped of his victory in the 2006 Tour de France for doping, now declaring that the whole sport is rife with enhanced cheating, and that he was even personally deputized to keep an eye on Lance Armstrong's refrigerated blood used for doping.

Yes, of course Lance Armstrong, the cancer survivor, is innocent 'til proven guilty — although an insensitive misanthrope might dare suggest that he is also a guilt survivor.

This is just one more of several similar accusations leveled at Armstrong over the course of many years, and taken together they would tax the gullibility of every sucker P.T. Barnum even dreamed of fleecing. The cycling establishment, which knows that the value of the whole sport turns to ashes if its great champion is ever convicted of fraud, cries that Landis is just bitter and vindictive.

Ahh, yes. And remember Jose Canseco? He, like Landis, also finally admitted taking drugs and then fingered many of his baseball brothers, which caused the sport's establishment to say the same self-serving things about him -- right up until the moment Canseco was proven right.

Yes, of course Lance Armstrong, the cancer survivor, is innocent 'til proven guilty -- although an insensitive misanthrope might dare suggest that he is also a guilt survivor.

Now too, Alex Rodriguez and Tiger Woods have admitted having dealings with a Canadian doctor, Tony Galea -- who was just charged with smuggling HGH into the U.S. and giving it to NFL players. Naturally, Woods says Galea didn't give him any HGH.

No -- he's just a wonderful doctor who, although unlicensed to practice in this country, conveniently makes house calls from 1,200 miles away. Excuse me, there are no good licensed doctors in Florida?

I'm sorry, it's just too difficult any longer to believe any athlete about drugs. Too many of them have lied and lied and lied, until they were proved to be ... lying. Oh, I know they're all innocent until proven guilty. It's just that by now, I'm afraid that I think sport -- all sport -- is guilty until proven innocent.