Accessibility links
Jamaican Cleric Uses Web To Spread Jihad Message Young Muslims in the U.S. are becoming radicalized in a new way: on the Internet. Clerics such as Abdullah Faisal are directing the young men to take up violent jihad. Faisal, who recently set up shop in Jamaica, has alleged ties to terrorist plots around the world. 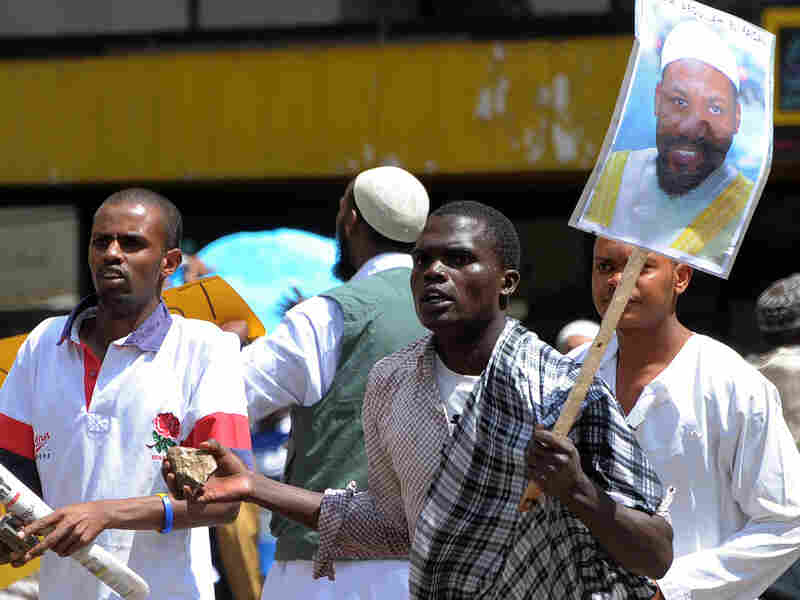 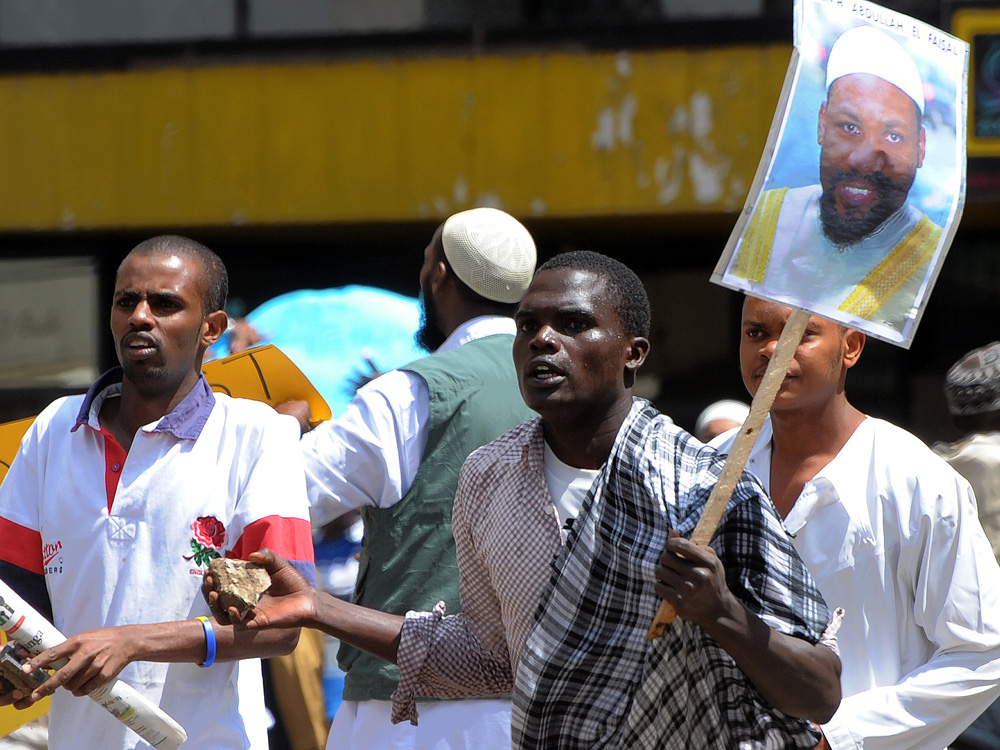 Kenyan Muslims in Nairobi carry posters of Jamaican cleric Abdullah Faisal and throw stones at police during a Jan. 15 demonstration demanding Faisal's release from Kenyan custody. U.S. intelligence officials say Faisal was recruiting for al-Shabab, a Somali Islamic militia with links to al-Qaida. Faisal denies the allegations. He was eventually returned to Jamaica from Kenya.

A pattern is emerging about the way young Muslims in the U.S. are becoming radicalized. It is happening on the Internet. Young men are finding radical clerics on the Web and, at their direction, taking up violent jihad.

Faisal Shahzad, the Pakistani-American who is accused of trying to detonate a car bomb in Times Square earlier this month, says he was radicalized via the Internet. Intelligence officials tell NPR that one of his inspirations is Sheik Abdullah Faisal, who recently set up shop in the Caribbean.

Radicalizing young men like Shahzad used to be a process that took months and generally required one-on-one recruiting, officials say. Now the radicalization process appears to happen at breakneck speed, just with the click of a mouse.

Linked To Plots Around The World

Abdullah Faisal is one of the best known radical clerics on the Internet today. NPR set up an interview with Faisal weeks ago. But when he arrived to speak to us in Montego Bay last week, he demanded money for the interview. NPR refused. So he declined to speak on tape.

But what he revealed in a conversation provided a peek into the mindset of an Internet cleric who is dancing along the line between free speech and incitement.

He is a compact man who, on that day, wore a pale blue button down shirt, jeans and a blue skullcap. Faisal, 46, is a Jamaican convert to Islam and is the island's most infamous Muslim -- largely because of his alleged connections to terrorist plots around the world.

While no one has accused him of playing a direct role in attacks, he has ties to shoe bomber Richard Reid, the so-called 20th Sept. 11 hijacker Zacarias Moussaoui, and one of the suicide bombers in the 2005 London attacks.

More recently his name was raised in connection with Shahzad, the Times Square bombing suspect, a Pakistani-American man who allegedly tried to ignite a car bomb in Times Square on May 1.

Abdullah Faisal said he had a way of influencing people, "so the authorities are worried that I will send people to do things," explaining why he is being tracked by police since his return to the island earlier this year.

"There are people who are inspired, and they take things into their own hands," he said.

And even if a good Muslim didn't want to fight, he has no choice but to do so because "jihad is brought to your doorstep."

It is the same kind of message Faisal delivers in his lectures on the Internet. And his words worry intelligence officials.

Faisal left Jamaica for Saudi Arabia when he was just 17. He studied Islam and Arabic and showed up in the U.K., preaching at radical mosques all over England. He was a mentor to Germaine Lindsay, another Jamaican convert who blew himself up in the London train bombings in 2005. Faisal was an imam at the Brixton Mosque where Richard Reid, the shoe bomber, among others, also prayed.

In the U.K., his lectures were considered so incendiary that a British court eventually sent him to prison back in 2003. He was sentenced to nine years for soliciting murder and stirring up racial hatred when he tried to justify the killing of nonbelievers -- specifically Jews, Hindus and Americans. He served a little more than four years of the sentence.

"A lot of us were very surprised when we heard these allegations against him," said Mustafa Mohammed, a Muslim leader in Jamaica who knew Faisal when he was a young man in Jamaica. The two were contemporaries, and Mohammed didn't want to believe that his friend had embraced radical Islam.

"It was not until we listened to some of the tapes that we realized that were is some credit to what he's been accused of," Mohammed said.

Faisal first returned to Jamaica in 2007 after British authorities deported him. He left a short time later, traveling around Africa to lecture in mosques there.

Late last year, the Kenyan government detained him. Officials said he was doing things "incompatible with his visa status."

U.S. intelligence officials say he was recruiting for a Somali Islamic militia with links to al-Qaida called al-Shabab. Faisal denied it.

"The Kenyans were freaked out by what I might say, not what I did say," Faisal told NPR. "A lot of Kenyans have joined al-Shabab. If I preached for them to go, thousands would leave, but that topic was not on my itinerary."

The Kenyans spent weeks trying to deport Faisal. Country after country denied him a transit visa. The Kenyans ended up chartering a Gulfstream jet for $500,000 and flying Faisal back to Jamaica directly. "It was a nice plane; it had eight seats," he said. Then he asked: Is that a Gulfsteam IV or a Gulfstream V?

Faisal's return to the island earlier this year put his old friend Mustafa Mohammed in an awkward position. As head of the Islamic Council in Jamaica, Mohammed ended up having to bar Faisal from speaking at local mosques.

"He has been banned from giving the Friday sermons, teaching in classes," he said. "This is the first time I had to make this decision and it was not something that came easily, and especially because you are speaking about a person who has a lot to offer the Muslim community."

Mohammed said the elders in the Muslim community didn't want to risk having Faisal radicalize their young men. When Mohammed talks about Faisal, it is clear he wishes his friend had decided to use his gifts to educate Muslims on the island rather than the path he has chosen.

"He gravitates people toward him," Mohammed said. "He's very eloquent."

Sheik Musa Tijani is the educational director at the nursery school at the Central Mosque in Kingston. When he enters the classrooms and says hello to the children in Arabic, they respond in kind. Ten years ago, when the school was established, it struggled to survive. It had only 10 children enrolled. Now there are 65 -- little girls are wearing hijabs and high-top sneakers; boys wear a uniform of little green T-shirts and shorts.

Tijani says Faisal inflates his own importance in Jamaica, and that he has no traction with the young on the island.

"All the Muslims in Jamaica are hearing about him but don't see him as a big man," he said, adding that Muslims in Jamaica don't have much interest in political Islam or violent jihad. He thinks the community is too small -- there are only about 5,000 Muslims -- and Faisal isn't a leader among them.

Focus On Battlefields, Not U.S.

While Tijani may not see Faisal as a big man, U.S. intelligence officials are worried that Faisal could become one by recruiting followers in Jamaica -- where there are many poor, disaffected youths without many prospects. The intelligence officials' concern is that he could manage to open up a new front for violent jihad aimed at the U.S.

In this case, rather than being half a world away, potential terrorists would be a little over an hour's flight from Miami.

But for now, officials say that is a future concern.

Their current focus is on Faisal's global reach on the Web. Intelligence officials tell NPR that he launched a jihadi chat room about a month ago. Some 40 to 50 people regularly sign in to the sessions -- and officials believe most of those people are in the U.S.

The suspect in the Times Square case allegedly listened to Faisal's Internet lectures and tried to contact him.

Faisal said he doesn't think he got any e-mails from him. He offered to check by screen name. More importantly, Faisal said he thinks Muslims focused on violent jihad should confine themselves to the battlefield -- to Iraq or Afghanistan -- and that they shouldn't attack Times Square.

Awlaki, The Other Imam

That puts Faisal on a different footing than another famous radical cleric -- Anwar al-Awlaki -- who also apparently inspired the Times Square suspect. Awlaki is the American-born imam who is on the CIA's kill or capture list. U.S. officials say he is an operative for al-Qaida's arm in Yemen.

He released a new video this week that said both the Fort Hood shooter, Maj. Nidal Hasan, and Umar Farouk Abdulmutallab, the young man who tried to blow up a U.S. airliner on Christmas Day, were his students -- and he is proud of their efforts to try to attack the U.S.

In the past, Awlaki had danced around the issue of whether U.S. civilians were legitimate targets in a terrorist attack. He had said the Fort Hood shootings, in which 13 people were killed when a gunman opened fire on soldiers on post, were justified because the soldiers killed were going to Iraq and Afghanistan.

In this most recent video, he added that Abdulmutallab's alleged attempt to blow up an airplane with civilians on it was fine, too. He said that because civilians are being killed in Iraq and Afghanistan, it is permissible to kill civilians in the U.S.

What's more, he said, because U.S. civilians have voted this administration into office, they are fair game. This is an argument that Osama bin Laden has made for some time, but it is new for Awlaki.

Abdullah Faisal, poolside in Jamaica, seemed to stop short of that. "The U.S. isn't the battlefield," he told NPR.

Even so, a lot of people seemed to be worried about Faisal's return to the Caribbean.

We met him at an American hotel in Montego Bay. It became clear later that the Jamaican staff all knew exactly who he was and were rattled when he strolled through the lobby. After he left, the assistant manager of the hotel called me into her office. "This is an American hotel," she said. "And having Abdullah Faisal pass through here worries us."

The assistant manager talked for about 15 minutes before it became clear her concern wasn’t just that he was a terrorist, but that I might be one, too -- and that the two of us might be planning to attack her hotel, a prime American target in Jamaica.