Accessibility links
A Newcomer's Guide To The 2010 World Cup Soccer is increasingly popular in the states, but for many Americans, the World Cup can be summed up in two words: learning curve. The 2010 FIFA World Cup kicks off in South Africa on June 11. Don't know whom to root for or which teams are playing? Sportswriter Stefan Fatsis provides the lowdown on the players and teams to watch.

Soccer is increasingly popular in the states, but for many Americans, the World Cup can be summed up in two words: learning curve.

So what to know before the games begin on June 11? Sportswriter Stefan Fatsis, who will be heading to the tournament in South Africa, gives a primer on which teams and players to watch. 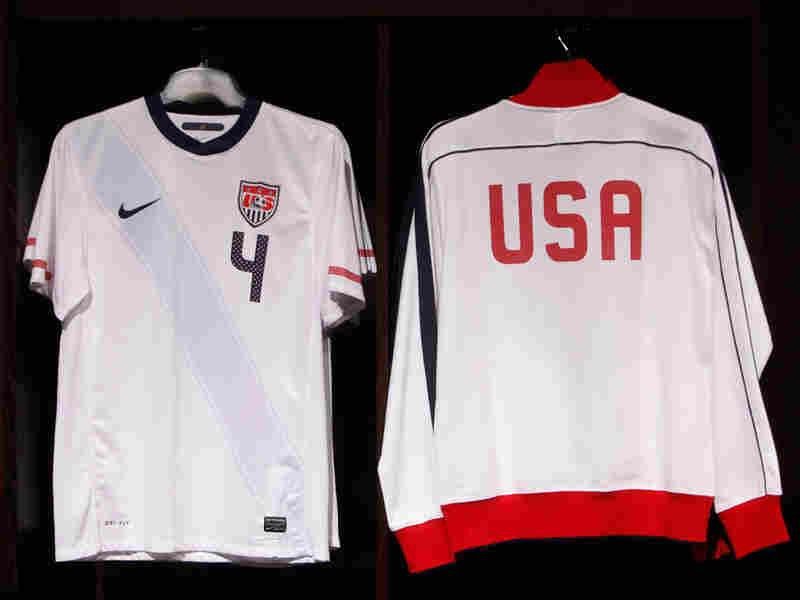 The uniforms for the U.S. men's national soccer team were designed by Nike. The shirt, with its diagonal stripe, is a throwback to the 1950s U.S. World Cup team that beat England. Seth Wenig/AP hide caption 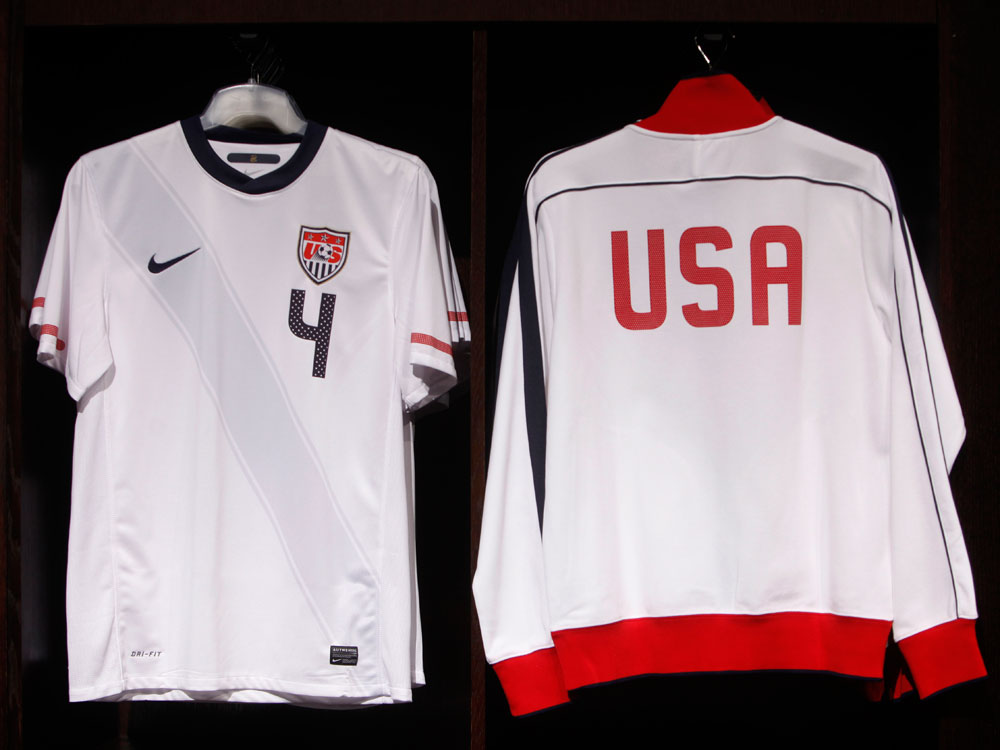 The uniforms for the U.S. men's national soccer team were designed by Nike. The shirt, with its diagonal stripe, is a throwback to the 1950s U.S. World Cup team that beat England.

His impressions of the American team, which was announced on May 26?

"We've got a world-class goalkeeper in Tim Howard; a strong midfield with Landon Donovan, the coach's son, Michael Bradley, and Clint Dempsey from Texas, who just finished a terrific season with Fulham of the English Premier League," Fatsis says.

The big question mark for the United States is defense, he says.

"Three of the likely starting defenders -- Oguchi Onyewu, Jay DeMerit and Carlos Bocanegra -- are all recovering from injuries and there's not a lot of depth behind them," Fatsis says. "So I'm optimistic about three-quarters of the field and a little bit worried about the very important final quarter."

If you're not cheering for the U.S. team, and you're looking for a front-runner team to root for, Fatsis suggests Spain and Brazil. Or, "if you want to show some style chops -- or you like the color orange -- I would say go with the Netherlands," he says.

The trendy team to root for will be the Ivory Coast. "No African team has ever made a World Cup final, and they are the best of the African teams in the tournament," Fatsis says.

The host country has never failed to get out of the first round. But South Africa is ranked 83rd.

Cristiano Ronaldo, the great Portuguese midfielder, has been romantically linked to actress and socialite Kim Kardashian.

The jerseys worn by the U.S. team pay tribute to those worn by the Americans in 1950. Joe Gatejens, who scored the winning goal against England, wasn't even a U.S. citizen.

As for individual players, Fatsis suggests keeping an eye out for Lionel Messi of Argentina, a player he calls "arguably the best player in the world right now." He also suggests watching Didier Drogba of Ivory Coast. Drogba is a U.N. ambassador who's been credited with helping end his nation's civil war.

Finally, Fatsis notes that Jong Tae Se of North Korea was born and raised in Japan and could have played for Japan or South Korea but chose to play for North Korea because he attended a school that was aligned with Northern interests. Last week Jong vowed to score a goal in each of the opening rounds -- against Brazil, Portugal and Ivory Coast.

"That is a tall order," Fatsis says.

The games will be hard to miss. ESPN has rolled out unprecedented coverage, Fatsis says. The network will show all 64 games live on ESPN, ESPN2 or ABC, and 52 of those games will be shown simultaneously online.

"They have genuinely embraced the sport," Fatsis says. "The big change is that ESPN has ditched what I thought was a parochial approach in 2006 when they made an American baseball announcer the lead play-by-play guy, and they spent a lot of time explaining the sport. This time the top four announcers will have British accents and more important, vast, vast experience calling soccer."

Fatsis is married to All Things Considered host Melissa Block, who conducted the interview.