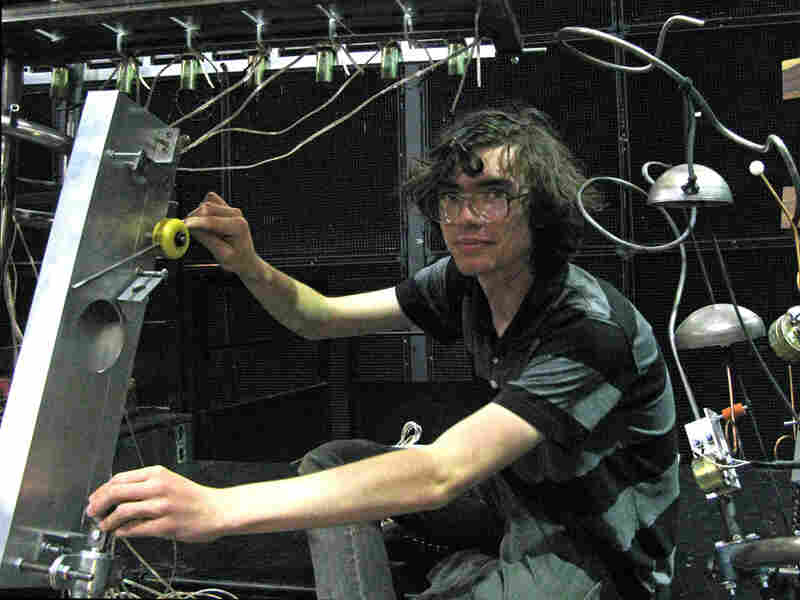 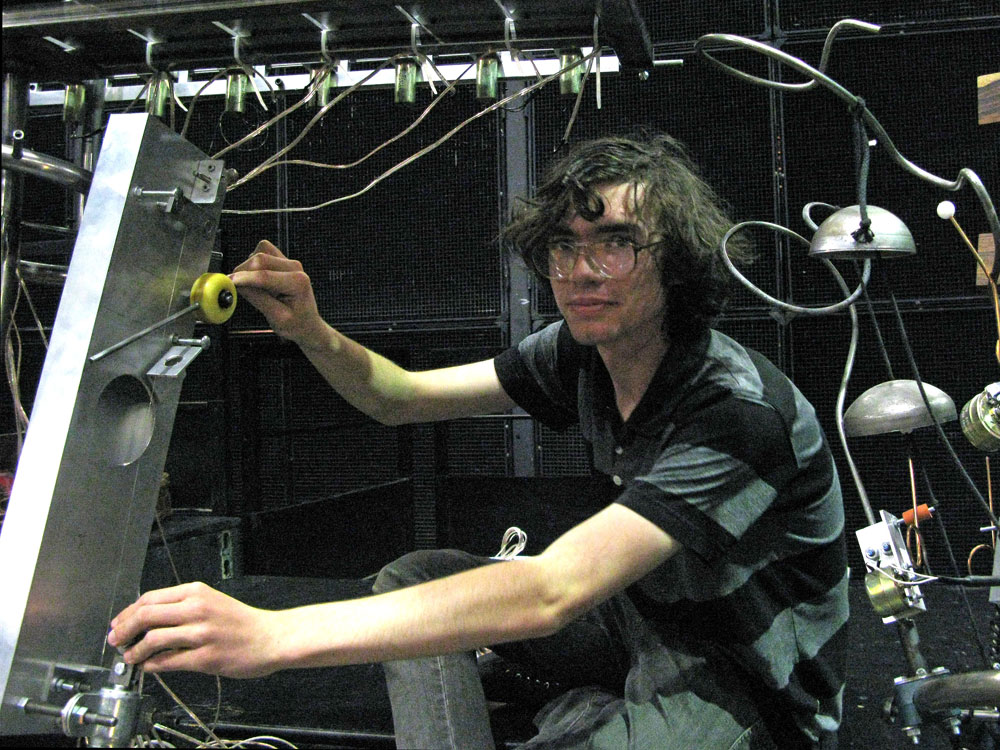 A CalArts student shows off his robot.

Kapur offers a class in which students become part of the Karmetic Machine Orchestra, an ongoing project of his. But when this orchestra warms up, it isn't the typical scene. Instead of telling the musicians to tune to A, Kapur tells them to "tune into the client." A series of boings, pings and reverberating notes follows, and then the orchestra begins.

Watching the Karmetic Machine Orchestra is like getting a peek at the inner workings of a factory through a sheet of glass. It churns. Gears turn. Wired mallets beat drum heads. Some of the musicians sit at laptops looking like workers as they rhythmically press buttons.

The robots aren't built to resemble humans. They're made of screws, wires and found objects. For example, there's a "string bot" made of aluminum boxes, skateboard wheels and guitar picks. Student Jim Murphy's robot has a motor that spins quickly and plucks a string with guitar pick. He can adjust the speed of the motor with his laptop and change the pitch, or even make it sound like a slide guitar.

Programming machines to make music isn't new; it's been around as long as player pianos have existed. But these robots are different: They've been programmed to improvise. That means that Murphy and the other musicians are never certain how a robot will respond.

"You feel like you're playing with another human," Murphy says. "Instead of simply manipulating a tool, it feels like you are sitting there playing with something that has its own quirks. It has almost its own personality. Each robot has a different feel to it."

When Murphy talks about playing his robot, he almost sounds like a conductor. He says it's amazing to control an machine that sounds like an entire orchestra of percussive sounds. There are conventional instruments in the orchestra -- a sitar, a bass, a piano -- but even they are interconnected to the matrix of robots.

The programs that bring spontaneity to these robots were all written by the students. At a time when so much music is created with computers, Kapur says musicians should all know how to program. He says it gives them more control.

"Only knowing how to use, like, a software package that comes out from a certain company completely limits you," he says. "And this is the only way that you can really think about this media and this art. Learning to program and build all these things yourself, you can make up whatever you want."

But humans, not robots, should be making music, says Jaron Lanier, the musician, composer and computer scientist who popularized the term "virtual reality." Lanier says that, while it's interesting to have robots play music, it's a silly idea in the long run.

"I think it's kind of making a mistake in the sense that making robots play music is kind of missing the point," Lanier says. "It's sort of like having a robot have sex for you so you don't have to."

Musician John Woods-Wahl says robots aren't replacing humans, but that he thinks of them as instruments that can make sounds humans can't. Tyler Yamin has been working on a robot to play in a Gamelan, an Indonesian musical ensemble that includes gongs, flutes and metal drums.

"Normally, one person would play two or three pots at a time with two sticks," he says. "But instead of having a robot with two arms, I'm going to have a robot with seven arms."

Robots that pluck strings and bang drums are also a lot more interesting to watch than most electronic music. Kapur says he's never really compelled by the usual electronic show, in which someone stands behind a laptop hooked up to some speakers. An audience at a Karmetic Machine Orchestra performance, however, gets a close-up of the moving parts live on giant screens; the experience is more like watching a science-fiction movie.

Ultimately, Kapur says he's not trying to teach his students to be programmers -- he's trying to help them become artists.

"We're not MIT and we're not like a technical university," he says. "We are a music school. Our job is to make good music that people want to listen to."