Accessibility links
Jump Start: NUMMI Is Reborn For Electric Cars A storied auto factory in Northern California called NUMMI will be reopened in 2012 by Toyota and Tesla to manufacture electric cars. Toyota says it will invest $50 million in Tesla to collaborate on the construction of a new electric vehicle. 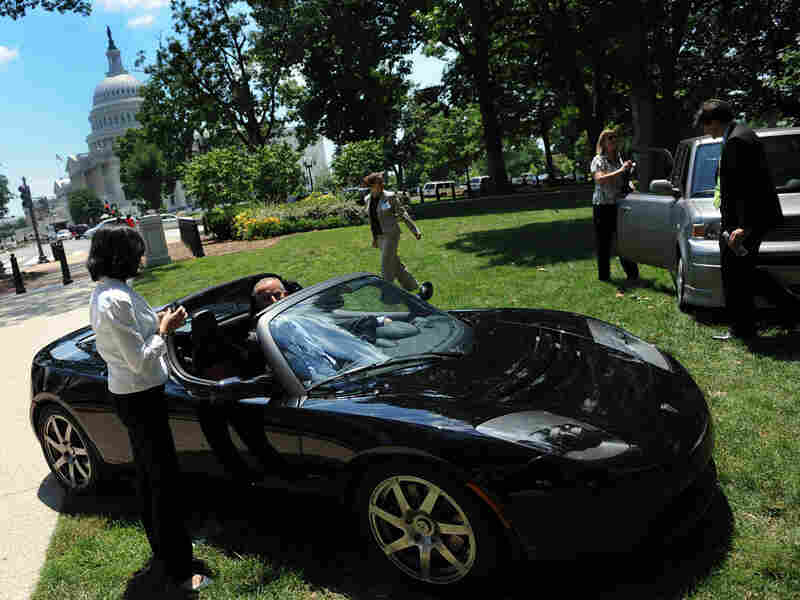 The Tesla Roadster, an electric sports car, sits on display in Washington, D.C., during a showcase of new automotive technologies in 2008. Tesla now plans to build a Model S family sedan and other electric vehicles with Toyota in the NUMMI plant in Fremont, Calif. Tim Sloan/AFP/Getty Images hide caption 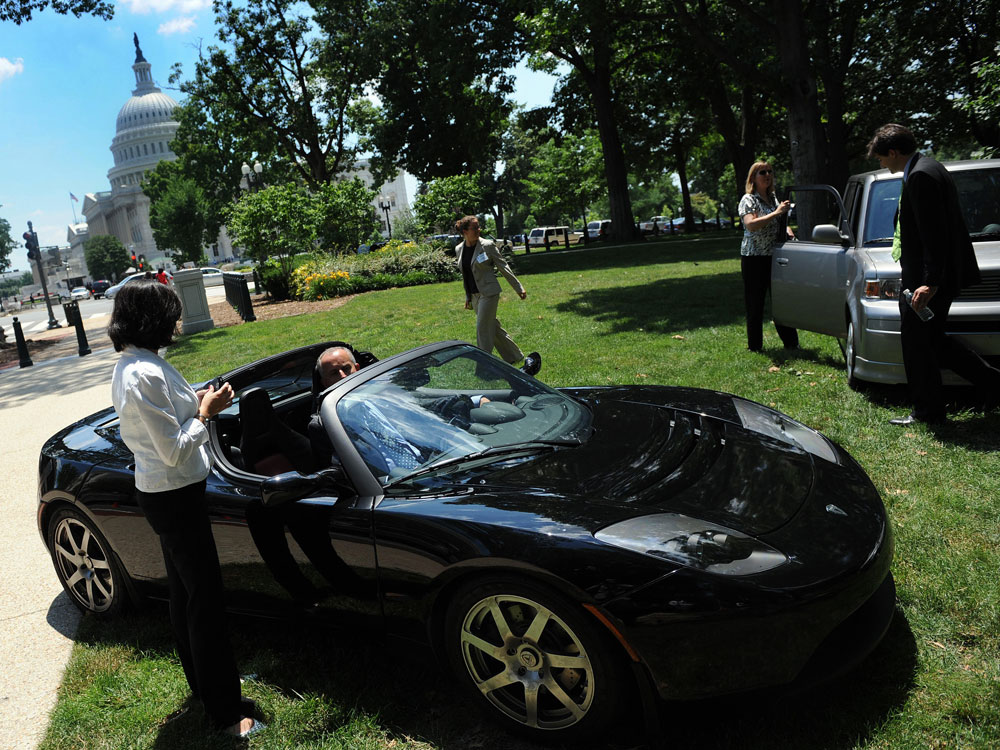 The Tesla Roadster, an electric sports car, sits on display in Washington, D.C., during a showcase of new automotive technologies in 2008. Tesla now plans to build a Model S family sedan and other electric vehicles with Toyota in the NUMMI plant in Fremont, Calif.

Thousands of unemployed autoworkers in Northern California are hoping for a future building electric cars. Their hopes center around a new deal between the giant carmaker Toyota and Tesla Motors, an electric car company that's giving new life to a Toyota plant that closed last month.

The agreement between Toyota and Tesla was announced by Toyota's CEO Akio Toyoda, who promised to invest $50 million in Tesla. The fledgling electric carmaker will, in turn, buy the old NUMMI plant, a facility where Toyoda himself had once worked.

"I'm extremely happy that the DNA of car making that the NUMMI team developed over 25 years of production there will live on in an industry for the future," he said.

Going For A Drive

The impetus for the partnership came about six weeks ago when Toyoda visited Tesla CEO Elon Musk at his home in Southern California. The two men hit it off, especially after they went for a test-drive in a two-seat Tesla Roadster with Toyoda at the wheel.

"Not only was I impressed by Tesla technology, but I also felt their energy. Simply put, I felt the wind -- the wind of the future," Toyoda said.

Toyota and Tesla will collaborate on an electric car. And at the same time, Tesla will use the NUMMI plant to build its new electric family-size sedan called the Model S.

"The Model S is initially only about a 20,000-vehicle production. So we're going to be occupying a little corner, but there's a lot of room for growth; and longer term, we intend to use the full capacity of NUMMI," Musk said.

A Boost For Electric Car Production

Car industry experts say the deal gives Tesla a major boost in mass-producing an electric car. And for $50 million, Toyota gets access to Tesla's powertrain technology. But Toyota may get something more, such as some goodwill from the public when it really needs it, according to Jeremy Anwyl, the CEO of Edmunds.com.

"I think they score a lot of political points by keeping that plant going. They may not say that, but my suspicion is that's their driving motivation, and I think that's a very smart move," Anwyl said.

University of California, Berkeley labor expert Harley Shaiken said there's tremendous potential for Toyota at a time when the company has fallen behind Nissan and Chevrolet in the electric car market.

"In the Fremont plant, the old Corolla line, which worked so well, is still there. That would mean a rapid transition is possible to building an electric Corolla or even a hybrid Corolla in Fremont," Shaiken said. "That could be a game-changer for the industry, and certainly for jobs."

Tesla's Musk said he plans to start production of the Model S within two years and hire up to 1,000 workers in Fremont. And he said he wouldn't encourage or oppose the workers organizing a union.