Accessibility links
Gulf Disaster Is Now Worst U.S. Offshore Oil Spill Scientists from the U.S. Geological Survey say the flow rate from the blown-out well is at least twice as much and possibly five times as much as estimates cited by BP. The oil giant says engineers won't know until at least Thursday afternoon whether the latest attempt to plug the leak is succeeding.

BP's live stream of the oil leak from a remotely operated vehicle on the seabed:

BP resumed its attempt to choke off the gusher at the bottom of the Gulf of Mexico on Thursday after suspending it earlier in the day so crews could monitor their work and bring in more drilling mud.

Scientists from the U.S. Geological Survey said Thursday that the flow rate from the blown-out well is at least twice as much and possibly five times as much as estimates cited by BP.

USGS Director Marcia McNutt said results are preliminary but that two teams using different methods concluded the well is leaking at least 12,000 barrels of oil a day -- and possibly as much as 19,000 barrels. NPR first reported two weeks ago that BP's figure of 5,000 barrels was a considerable underestimate.

"These are best-case figures," NPR's Richard Harris said on All Things Considered. "In fact, they're working on a precise answer."

The Deepwater Horizon spill is now far larger than the 11 million gallons that spilled in the 1989 Exxon Valdez disaster.

The latest attempt to plug the well comes as sources confirmed for NPR that the director of the Minerals Management Service, the Department of the Interior agency that oversees offshore drilling, has resigned under pressure. Elizabeth Birnbaum had run the service since July 2009.

The MMS has been under intense scrutiny for lax enforcement of regulations and inappropriate behavior between its staff and oil industry representatives. Two separate reports -- one in 2008 and a second this week -- found that MMS staff members accepted gifts and trips from oil industry officials. All the alleged infractions occurred during the Bush administration.

The most recent report, from Acting Inspector General Mary Kendall, details the ethical abuses at the Minerals Management Service. Kendall recommended a series of steps to improve ethical standards, including a two-year waiting period for agency employees to join the oil or gas industry.

Interior Secretary Ken Salazar said this week that several employees cited in the report have resigned, were fired or were referred for prosecution, and that actions may be taken against others as warranted.

BP has been pumping tens of thousands of barrels of heavy drilling fluid down into the oil well, but essentially all of it has been forced out the well by the onrushing oil and gas and onto the seabed. The company says it's been starting and stopping the pumping procedure and studying the pressures in the well. 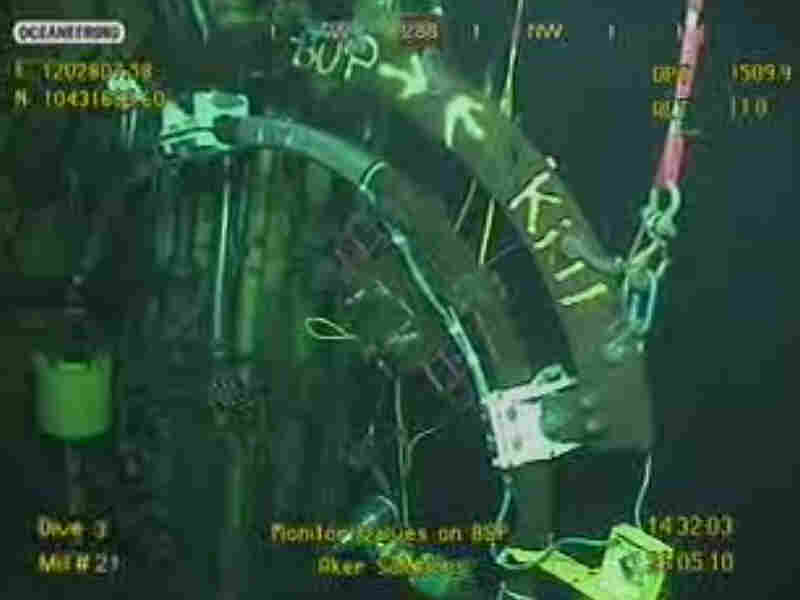 The "top kill" has worked aboveground but has never before been tried 5,000 feet beneath the sea. BP pegged its chance of success at 60 to 70 percent. AP hide caption 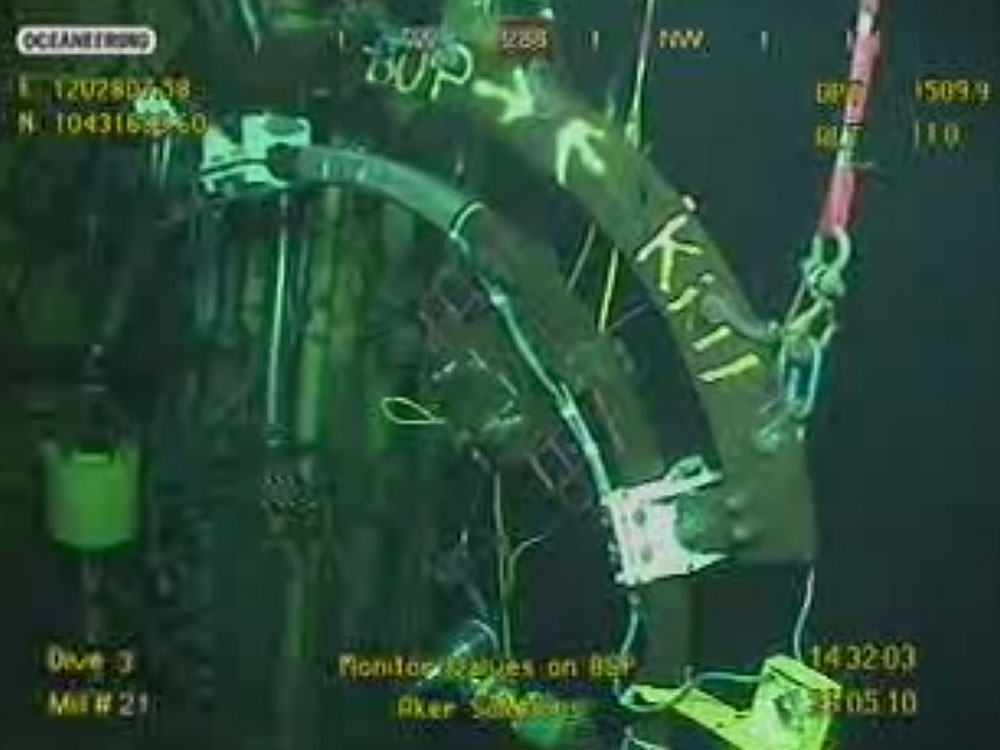 The "top kill" has worked aboveground but has never before been tried 5,000 feet beneath the sea. BP pegged its chance of success at 60 to 70 percent.

BP says it's considering a "junk shot" Thursday, a move that would involve forcing bits of tires and golf balls down into the well in an attempt to plug up some of the holes. The company would then pump more heavy fluid and hope that the junk will work like a dam to help hold the fluid in the well.

Earlier Thursday, Lt. Cmdr. Tony Russell, an aide to Coast Guard Adm. Thad Allen, said the heavy mud used in the top kill was stopping some oil and gas but had a ways to go before it proved successful. The critical maneuver to shut off the blown-out well 5,000 feet down started Wednesday night, and it could be several days before officials know definitively whether it is working.

"As you inject your mud into it, it is going to stop some hydrocarbons," Russell said. "That doesn't mean it's successful."

Questions about whether BP can stop the oil were on the lips of residents in Grand Isle at the bottom tip of Louisiana.

"Certainly there's hope. But the reality for us is that whether they cap it or not, we're still going to have an ecological and economic disaster down here, one that we don't know whether or not we'll be in a position to recover," Jefferson Parish Sheriff Newell Normand said.

Restaurant owner Sarah Rigaud said she is tired and nervous and that the oil has to be stopped.

"The tourists won't come," Rigaud said as she served lunch to a half-full restaurant of mostly oil workers and local politicians who are worrying themselves. "I have anxiety attacks. Every day I pray that something happens, that it will be stopped and everybody can get back to normal."

President Obama extended a moratorium on new deep-water oil-drilling permits for six months while a presidential commission investigates the rig accident, according to a White House aide.

Obama also hit back at critics who accuse his administration of taking a hands-off approach to the disaster, saying the White House had been "singularly focused" since the disaster began.

"The day the rig collapsed and sank into the ocean, I had my team in the Oval Office," the president said at a news conference Thursday. "I'm briefed every day."

Obama is expected to travel to the Gulf Coast on Friday to review spill operations, his second visit to the region since the April 20 Deepwater Horizon disaster. He made clear that BP is taking orders from the Coast Guard's Allen: "Make no mistake; BP is acting at our direction."

The extended freeze on drilling stems from a 30-day safety review of offshore drilling conducted by Salazar at the president's direction.

Meanwhile, Salazar said the government will require certification of emergency cutoff valves on offshore oil wells like the blowout preventers that failed in this spill.

Also Thursday, victims and family members told their stories to the House Judiciary Committee in an emotionally charged meeting on liabilities from the spill.

Keith Jones, the father of one those who died in the April 20 explosion, said those responsible must be held accountable.

"You must make certain they are exposed to pain in the only place they can feel it: their bank accounts," he said. "As a friend said, 'Make them hurt where their heart would be -- if they had a heart."

Transocean, which owned the Deepwater Horizon rig, told the panel it will pay what it is legally required to pay. BP, which operated the rig, repeated its promise to pay legitimate claims.

Meanwhile, Jimmy Harrell, a Transocean manager on the rig, denied there was an argument onboard shortly before the explosion that killed 11 people. That contradicted earlier testimony at a joint inquiry by the Coast Guard and the Interior Department.

The exact causes of the accident have not been determined but congressional investigators have released details suggesting BP ignored warning signs of instability in the exploratory well they were attempting to cap when the explosion occurred.

Also Thursday, the Coast Guard's Allen said that Louisiana could move forward on building one section of its proposed barrier island project to help keep the oil from washing ashore. The Army Corps of Engineers has partially approved six sections of the project, covering about half of the state's original request.

The crude is having a devastating impact on Louisiana's fishing industry — which has virtually shut down — and delicate wildlife areas.

"Right now as you approach the marsh, it almost looks normal, but as you get closer you see that the bottom of the all the canes [are] coated with brown sticky oil," Maura Wood, who works on coastal Louisiana restoration for the National Wildlife Federation, told NPR.

"And then you see that on the surface of the water, there are still globs or red and brown and black oil almost as far as the eye can see," she said.