Accessibility links
Still Littered With Rubble, Haiti Stirs Slowly To Life Haiti's recovery from the devastating Jan. 12 earthquake is proceeding — but not fast enough for most. Aid workers say some of the almost 2 million people displaced by the quake will be living in shelters for another year or more. The task ahead remains huge and, in particular, a shortage of equipment is hindering demolition efforts.

Haiti's recovery from the devastating January earthquake is proceeding slowly. Aid workers and government officials say it's clear that some of the almost 2 million people displaced by the quake will be living in "temporary" shelters for another year or more.

Outside the capital, the recovery is progressing faster, but the task ahead remains huge.

The southern city of Jacmel shook violently on Jan. 12. The quake completely destroyed parts of the city, while other areas suffered damage to 20 to 30 percent of the buildings.

The quake's impact is still visible. At one gas station, the torn-apart cement awning leans ominously over the pumps. Cracked, abandoned buildings are all over Jacmel.

But crews have cleared most of the rubble out of the city's streets. Scooter taxis buzz busily around town. Shops have reopened. Old ladies sweep the pavement in front of their modest homes.

"I've been badly affected. I lost my mother, my wife and a niece. I'm very traumatized, and at night if I don't drink, I can't sleep," he says.

Oriental's shop also partially collapsed, and he lost much of his merchandise. He now lives in a tent in the parking lot of what used to be the Agriculture Ministry. 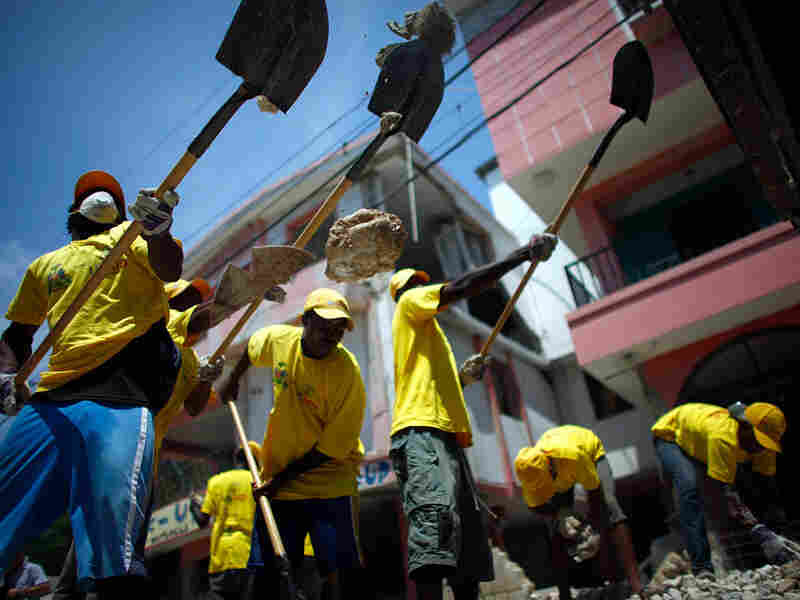 The U.S. Agency for International Development has contracted with relief groups to hire Haitians to clear rubble in the coastal city of Leogane. They also hope to get locals involved in the rebuilding process. David Gilkey/NPR hide caption 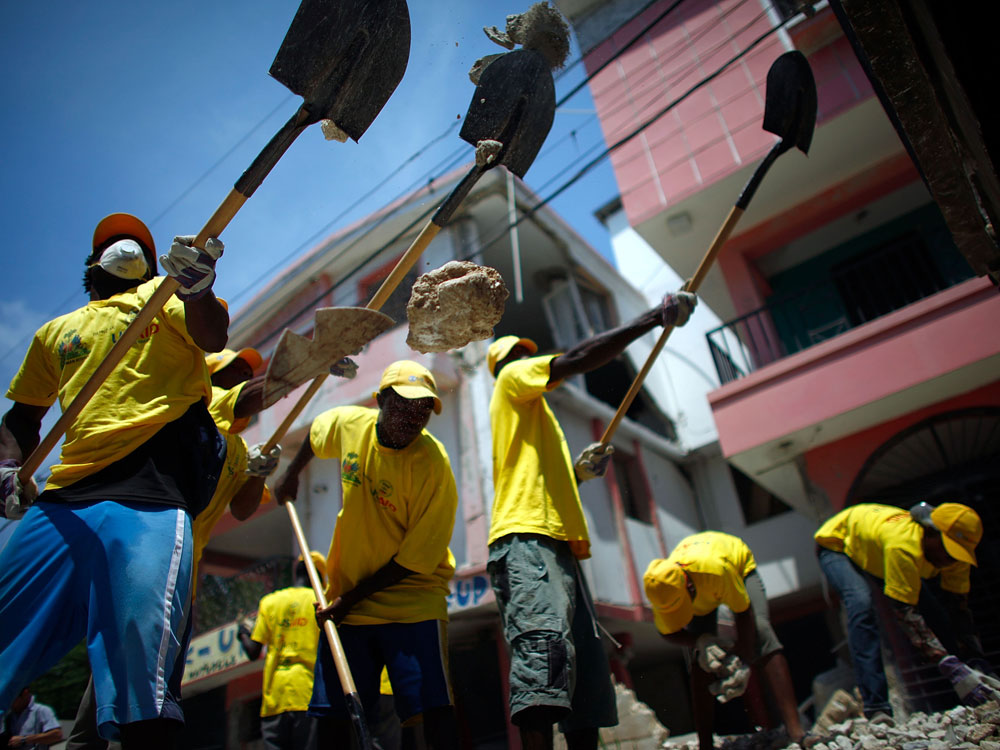 The U.S. Agency for International Development has contracted with relief groups to hire Haitians to clear rubble in the coastal city of Leogane. They also hope to get locals involved in the rebuilding process.

Oriental is frustrated with the slow pace of recovery, but he says that things are improving in Jacmel.

The road has reopened between Port-au-Prince and Jacmel. Some tourists -- mainly foreign aid workers and missionaries -- have started to return. At least there is some business, he says.

Jacmel's mayor, Edo Zenny, says things have improved so much that he's asking all the refugees from Port-au-Prince to go home.

Zenny says the main problem now in his city is the garbage from the people who fled from Port-au-Prince after the quake. Most are still living in the streets. He says the people from the capital dump trash at the curbs, and it's become impossible to keep the city clean.

In a public speech a few days earlier, Zenny declared that all these outsiders should go home.

"The majority of them are still here. We can't push them out. But we are going to find a way to be a nuisance to them so they leave," the mayor said.

Two months ago, he wouldn't have made such a demand. In a way, his statement shows how this crisis is evolving, and how Haiti is moving toward something like normal.

Across the quake-ravaged parts of Haiti, one of the main challenges is still the demolition of buildings. Demolition crews are in high demand.

Dale Lawson is the heavy equipment manager for CHF in Haiti. Despite being ex-Canadian army, he is wearing a U.S. Marines T-shirt.

Lawson oversees several crews that are under contract from the U.S. Agency for International Development to clear rubble in the coastal city of Leogane.

Walking through the valleys of debris of what used to be the main street, Lawson says the whole area needs to be demolished.

"You can't move forward when your place looks like this. ... There's no way," he says.

Leogane, which lies 18 miles southwest of Port-au-Prince, was at the epicenter of the quake. Most of the city was destroyed.

Watching a yellow Caterpillar scramble over a pile of shattered concrete that used to be a school, Lawson says his teams can remove a five-story building in about a day and a half. Caterpillar excavators on steel treads are their main demolition tool.

In April, CHF demolished 30 schools in Leogane in less than three weeks. Lawson has trained Haitians to run the excavators, bulldozers and dump trucks. And he says he'd clear even more buildings if he could just get more heavy equipment.

"We are not getting equipment the way we should. There should be a lot more equipment in here," Lawson says.

In the capital, demolition crews are also constantly clearing the rubble. Bulldozers knock down a school here, a bank there. The French military has heavy equipment rumbling throughout downtown Port-au-Prince.

But the task of rubble removal in the capital is so large that the backhoes are like bugs tearing at a giant crumpled sand castle. They clear a plot, but they're still dwarfed by the wreckage around them.