Accessibility links
New Ebola Drug 100 Percent Effective In Monkeys The devastating Ebola virus causes uncontrollable bleeding and kills up to 90 percent of the people it infects. Since it's emergence in 1976 scientists have been struggling to find treatments and presentations. Now there's a breakthrough: an experimental drug has that gives "complete protection." It still must be tested in humans. 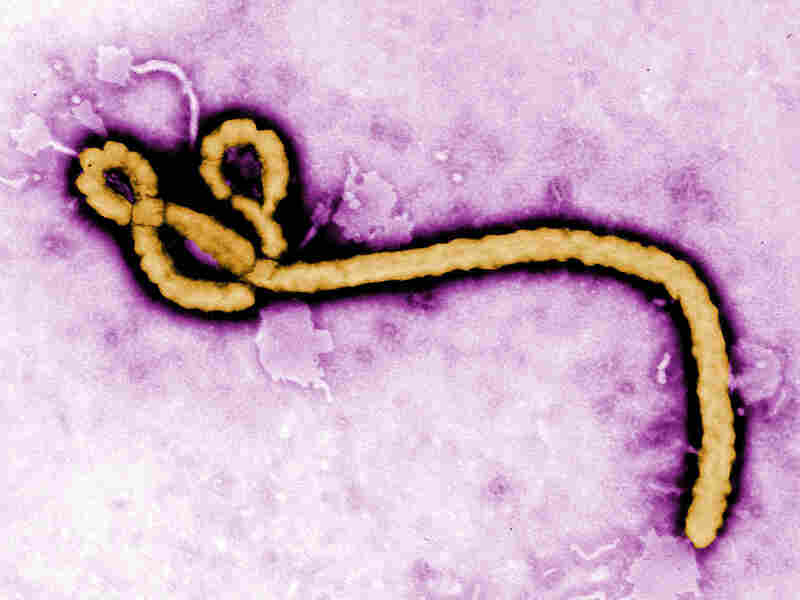 This colorized image shows part of the Ebola virus. The often-fatal Ebola hemorrhagic fever has appeared sporadically since its initial recognition in 1976. Frederick Murphy/CDC hide caption 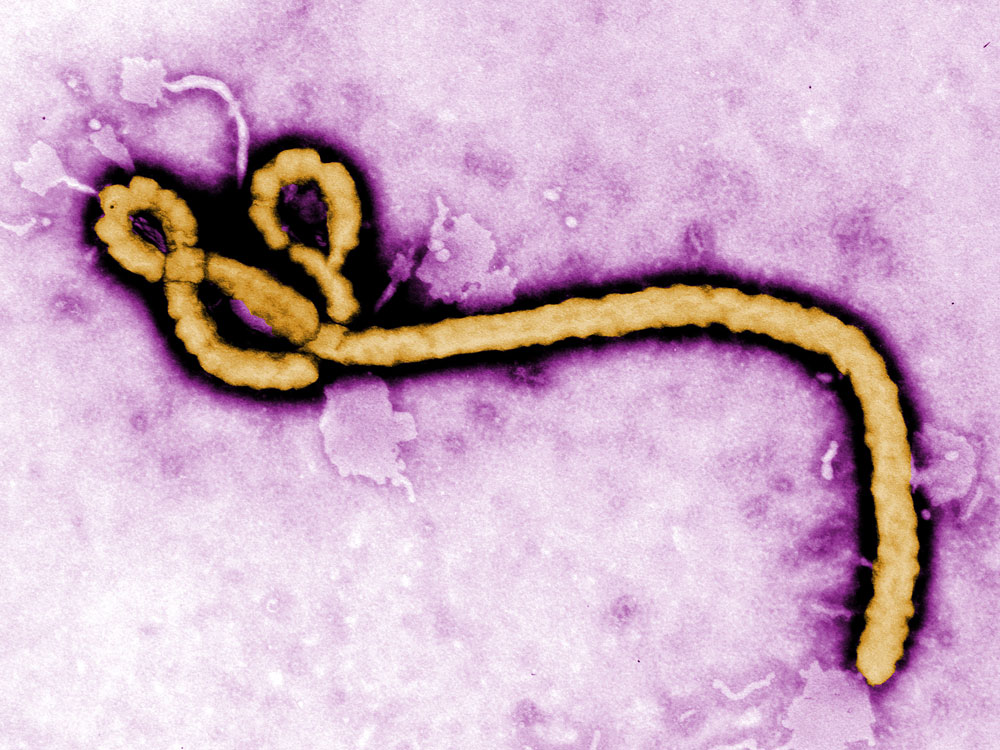 This colorized image shows part of the Ebola virus. The often-fatal Ebola hemorrhagic fever has appeared sporadically since its initial recognition in 1976.

The Ebola virus first emerged in 1976, striking fear with the uncontrollable bleeding it causes and mortality rates up to 90 percent. Ever since then, scientists have been struggling to find a way to treat the infection or protect against it.

There has been progress, but nothing quite like the report in the May 28 issue of the scientific journal The Lancet. A team led by Thomas Geisbert of Boston University has used an experimental drug to protect monkeys from death after injecting them with massive doses of the most lethal strain of Ebola.

"We were stunned," Geisbert says. "I've been working with this virus for my whole career -- 23 or 24 years -- and we've had some mild successes where maybe we could go up to 50 percent protection," he said. "But I was really shocked that we got complete protection."

Virologist Heinz Feldmann of the National Institute on Allergies and Infectious Diseases, who often collaborates with Geisbert but was not involved in this work, called the results "a milestone" -- and not just for treatment of Ebola.

"I think this will most likely also work for other related viral hemorrhagic fevers," Feldmann said, such as Marburg, Lassa and Crimean-Congo fever. All are deadly to one degree or another and cause outbreaks in Africa and elsewhere.

The drug that Geisbert's team devised, in collaboration with a British Columbia biotech company called Tekmira Pharmaceuticals, is a departure from other anti-Ebola measures. It contains snippets of RNA derived from three of the virus' seven genes. That "payload" is packaged in protective packets of nucleic acid and fat molecules.

These little stealth missiles attach to the Ebola virus' replication machinery, "silencing" the genes from which they were derived. That prevents the virus from making more viruses.

The drug worked in rodents, but rodents aren't a good indicator of how Ebola infections work in primates, such as humans. For that, researchers need nonhuman primates.

The Geisbert team did two sets of monkey experiments to test the novel drug. First, they injected four macaques with super-lethal doses of the Zaire strain of Ebola -- the deadliest. They gave something like 30,000 times more virus than was needed to kill the animals, to set the severest test for the experimental drug.

Can we go 24 hours or 48 hours or 72 hours before we start treatment? Can we increase the window and still achieve 100 percent protection?

Then, 30 minutes later, they injected three of the monkeys with the drug. They repeated the dose the next day and again on days three and five after the Ebola infection.

Two out of the three monkeys survived with only mild Ebola symptoms. The third one died, as did a control animal that didn't get the drug.

"Then we went back and said, maybe this is such a lethal infection, we could improve the outcome by increasing the number of treatments," Geisbert said. So they gave daily injections of the experimental drug over seven days. This time, all four monkeys given the experimental drug sailed through with mild or no Ebola symptoms. The untreated control animal died.

Of course, in the real world, people infected with Ebola might not get the drug within 30 minutes of infection like these monkeys did. So Geisbert is planning another set of experiments.

"Can we go 24 hours or 48 hours or 72 hours before we start treatment?" he wondered. "Can we increase the window and still achieve 100 percent protection?"

If these experiments pan out, it will be necessary to do safety studies in humans. That is, healthy volunteers would be given the drug to see if it causes any problems. But there's no ethical way to do the usual clinical trials in human Ebola patients -- and it would be logistically impossible, too, because natural Ebola outbreaks are unpredictable, usually in remote areas of Central Africa, and the virus moves quickly.

Recognizing these difficulties, the Food and Drug Administration eight years ago devised an "animal rule" for such viruses. Under the rule, if there's an animal "model" of infection that closely mimics the human disease, and the experimental treatment protects these animals, the FDA will consider those data as evidence of efficacy, along with studies demonstrating the drug is safe in healthy human volunteers.

But Feldmann worries that the money and commercial interest won't be there to invest in studies to bring the new Ebola drug to market.

"I personally feel that there is not the will to do this," Feldmann said. "And one reason for that, of course, is money."

The implications of having a successful treatment for Ebola -- and perhaps those other hemorrhagic fevers -- loom large. It could be life-saving for three groups of people:

-- People infected in the periodic outbreaks in Africa and other areas where hemorrhagic fevers occur, along with caregivers and public health workers who try to cope with such epidemics;

-- People who could get infected if terrorists got hold of Ebola or a similar virus and used it as a weapon, along with first responders and caregivers caught up in such an attack; and

-- Laboratory workers who periodically get infected accidentally with Ebola and other hemorrhagic fever viruses through needlesticks and bites from infected animals.

Researchers in this exotic field, of course, are eager to have a treatment that works when laboratory accidents happen. It has already occurred at least a half-dozen times, and sometimes lab workers have died. It's likely to occur more often, because new maximum-containment laboratories are opening in the U.S. and elsewhere to work with these dangerous microbes.

"You don't have to be extremely smart to predict that as more people work with this, the bigger chance there is that incidents like this [will happen] to laboratory workers," Feldmann said.

He vividly recalls an episode about a year ago. A laboratory worker in Germany accidentally stuck herself with a syringe loaded with concentrated Ebola virus, and Feldmann was among international experts conferenced in to help decide what to do for her.

The woman ended up getting an experimental vaccine that Feldmann had developed when he worked for Health Canada, and Canadian authorities managed to fly the vaccine to Hamburg within 40 hours of the needlestick.

She didn't die, or even get seriously ill, but nobody can say whether it's because of the experimental vaccine. It's possible she escaped infection in the first place.

"In a few months or years, we're going to sit around and try to do something for a colleague who was unlucky and got bitten by an infected animal in the lab or had a needlestick," he said. "We have all the proper protocols in place, but we're still humans and we make mistakes. It's just a matter of time when the next incident will happen."