Accessibility links
Falcon 9: A Future Space Taxi? A rocket set to launch this week could be the bellwether for President Obama's new vision for NASA. The Falcon 9 rocket was designed by a private company called SpaceX to deliver cargo to the International Space Station. The company is hopeful that one day it will also carry astronauts into space. 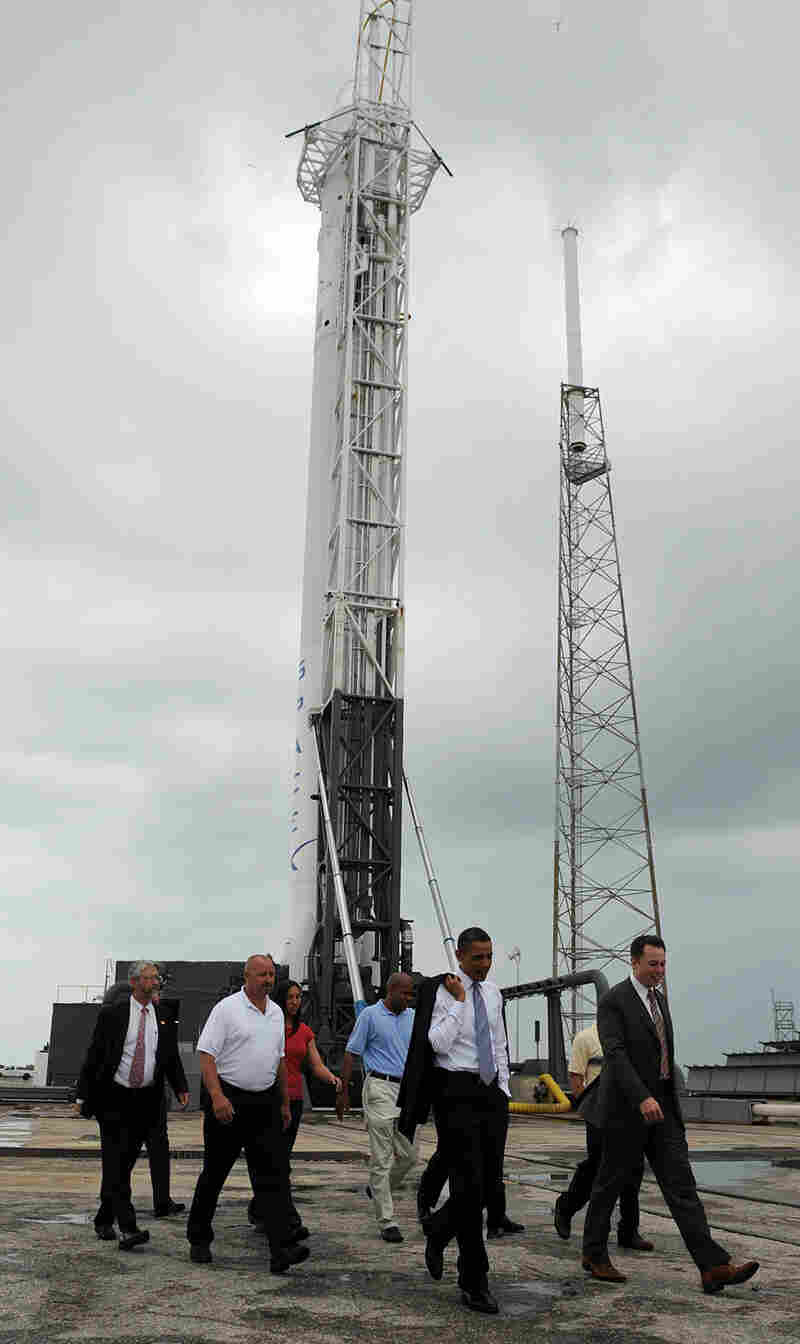 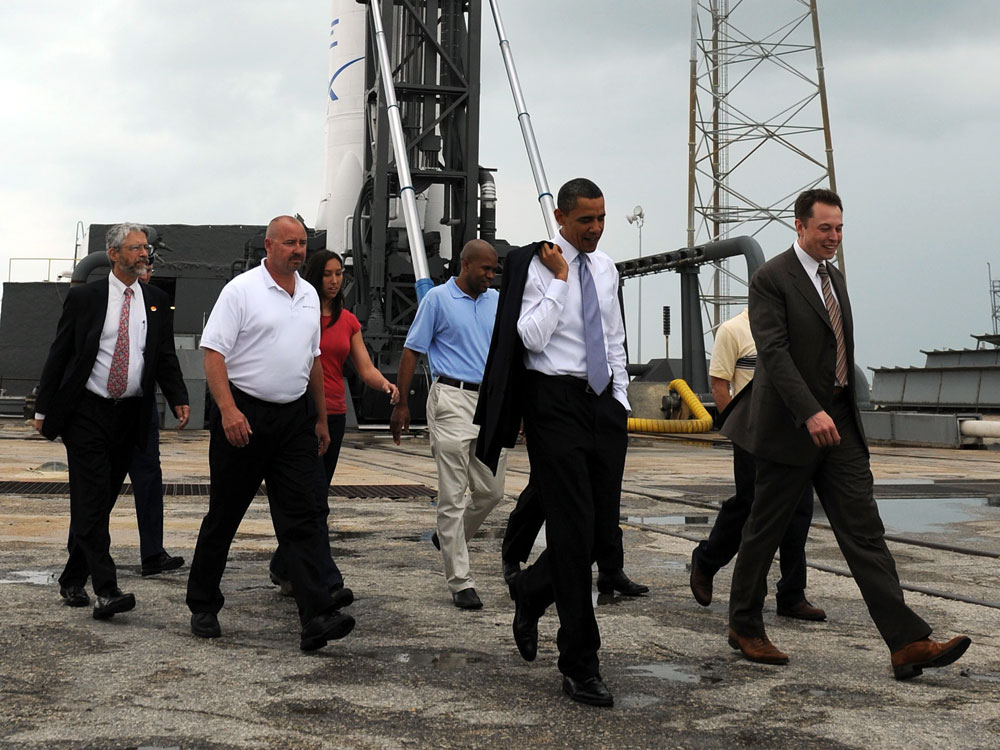 A white rocket that's as tall as an 18-story building is about to blast off from Cape Canaveral in Florida. And there's a lot riding on it -- at least symbolically.

This rocket wasn't built by NASA. Instead, it was built by SpaceX, a private company that hopes this new rocket will someday carry astronauts into space. And the first attempt to launch the Falcon 9 rocket is coming just as the Obama administration is trying to convince Congress that NASA should switch to using commercial space taxis.

"There's nothing more fear and anxiety-inducing than a rocket launch," says SpaceX founder Elon Musk, who's expecting to start the first Falcon 9 countdown any day now.

If all goes well, he says, the Falcon 9's unmanned test capsule should reach orbit about 10 minutes after launch. "Those 10 minutes seem like 10 days when you're actually there," Musk says. "Each second ticks over very slowly."

Musk has felt anxious seconds tick by before -- he's no stranger to the rocket launching business. He founded SpaceX in 2002, after making a fortune building up and selling the Internet company PayPal. His goal with SpaceX is to dramatically lower the cost of space transportation.

With the space shuttle program ending this year, the Obama administration wants the private sector to take over transportation to the International Space Station. This controversial decision has drawn criticism from several space icons, including Neil Armstrong. The private company SpaceX has a contract with NASA to use its Falcon 9 rocket to carry cargo to the station. If the Falcon 9 test launch is a success, it could ease doubts about a private takeover of the flights. Here, a look at some of the structural differences between NASA's space shuttle and SpaceX's new Falcon 9.

His company's first rocket, the Falcon 1, blasted off in 2006. Everything initially looked good. But then, seconds later, says Musk, "the engine shut off and it sort of came back and landed in the sea."

Photos Of Earth From Space: High Resolution From The High Frontier

The next attempt was also a failure. And the third. Not until the fourth try did the Falcon 1 deliver its payload to the right orbit.

The stakes are even higher for SpaceX's much bigger Falcon 9 -- with everyone wondering how a big success or failure might influence the future of NASA.

SpaceX has a contract with NASA to use the Falcon 9 and its "Dragon" capsule to carry cargo to and from the International Space Station, starting next year. And SpaceX has designed the Dragon spacecraft so that it could potentially take up NASA astronauts.

President Obama has been pushing the idea of this kind of space taxi for hire. In April, he visited the Falcon 9 rocket before giving a speech on space policy. In that speech, he said NASA would "work with a growing array of private companies competing to make getting to space easier and more affordable."

Under his new plan for the space agency, private companies would take over the job of getting astronauts to the space station so that after NASA retires the space shuttles, it can focus on developing technologies to get people farther out into space to visit new destinations like asteroids.

As part of this shift in strategy, the Obama administration wants Congress to kill a rocket program called Constellation that NASA has been working on to replace its aging shuttles.

But some lawmakers say canceling Constellation would leave NASA with no fall-back plan if private companies aren't up to the job of carrying astronauts.

Falcon 9's Impact On The Debate

At a recent congressional hearing, Sen. Richard Shelby (R-AL) pointed to the Falcon 1's three launch failures. And he noted that Falcon 9 is behind schedule.

"Today the commercial providers that NASA has contracted with cannot even carry the trash back from the space station, much less carry humans to or from space safely," Shelby said.

But Musk doesn't think it's fair that his company seems to get singled out by critics of the president's plan.

"They sort of focus everything on us and try to create a situation where our first launch of Falcon 9 is somehow a verdict on the president's policy, which is not right," he says.

And he says that another company, Orbital Sciences Corp., also has a contract with NASA to take cargo to the station in the near future. Like SpaceX's Dragon capsule, its cargo ship could potentially be modified to carry people.

Scott Pace, director of the Space Policy Institute at George Washington University, agrees that the debate over commercial services shouldn't be affected by Falcon 9's first try at blasting off. He says decisions about national policy shouldn't depend on just one company and one flight test.