Accessibility links
Louisiana Eateries Fear Oil Will Scare Seafood Lovers Many Louisiana restaurants are worried that oil gushing into the Gulf of Mexico will drive customers away -- even though the seafood is safe. Restaurant owners have sued oil giant BP, and they're spreading the word that they won't put unsafe food on their tables. Ewell Smith of the Louisiana seafood board says they're facing a "perception challenge." 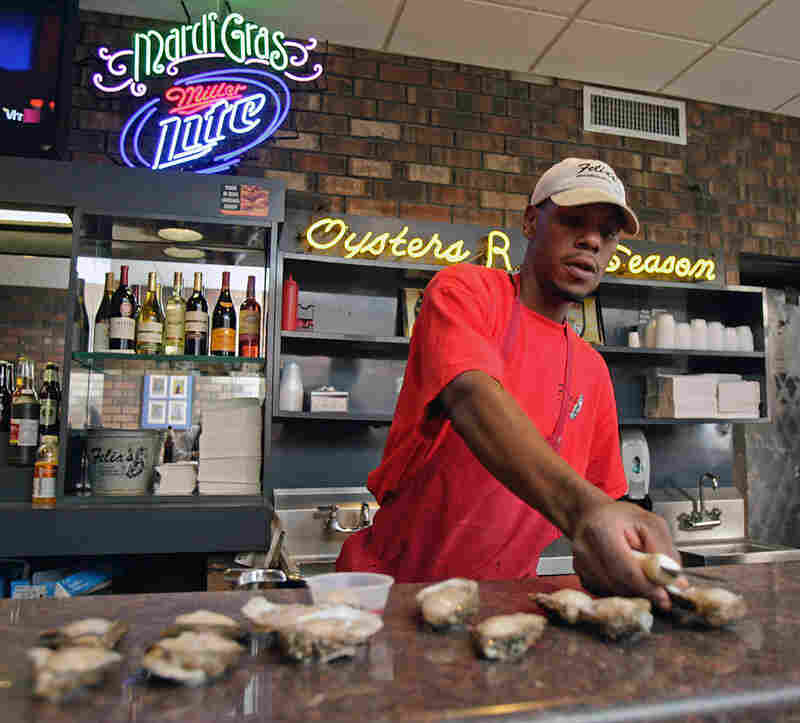 Kenneth Williams shucked oysters at Felix's Restaurant & Oyster Bar in New Orleans at the end of April. Restaurateurs say their seafood is safe and they won't put food on the table that isn't. But that hasn't stopped rumors from spreading. Bill Haber/AP hide caption 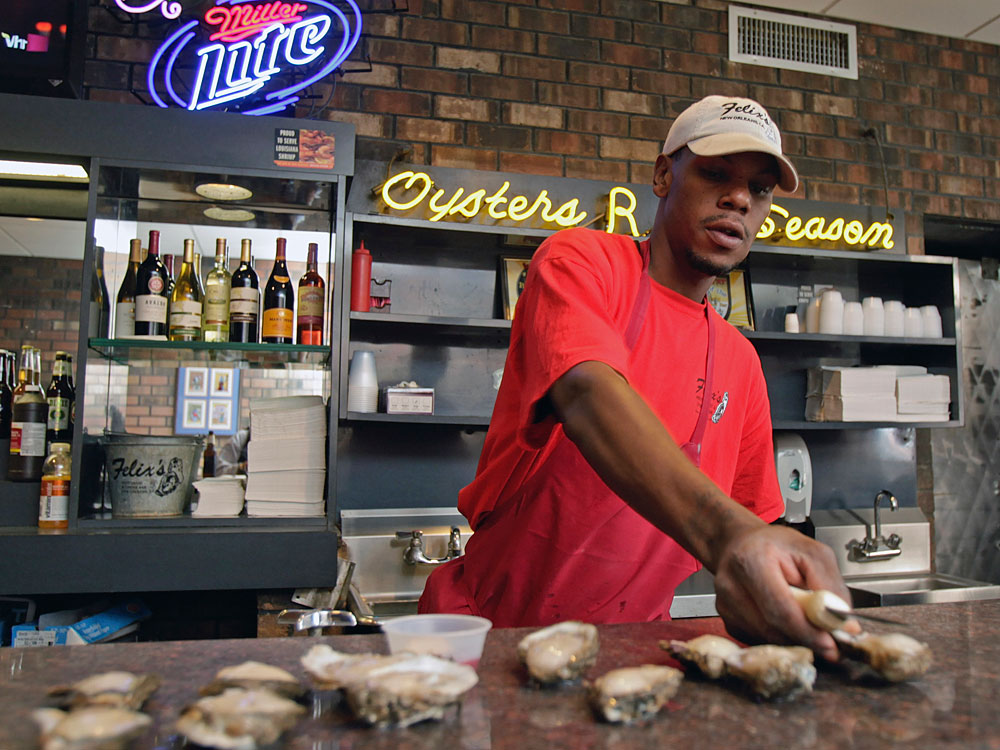 Kenneth Williams shucked oysters at Felix's Restaurant & Oyster Bar in New Orleans at the end of April. Restaurateurs say their seafood is safe and they won't put food on the table that isn't. But that hasn't stopped rumors from spreading.

New Orleans chefs pride themselves on their seafood delicacies. But many Louisiana eateries in the Crescent City, and elsewhere in the state, fear that oil spilling into the Gulf will drive customers away.

Restaurant owners have sued oil giant BP, and they're spreading the word that their seafood is safe. It's still on the menus.

At Dickie Brennan's Bourbon House, on the same-named street, 45 sacks of oysters were recently delivered and shucked and served. Leo Price taps his knife onto the shell and listens for a particular sound.

"When I tap on it, a hollow sound means no water. A silent sound means the oyster's good," he says.

Those good oysters, piled on a half shell and stacked on the shiny oyster bar, are the first things customers see when they walk into the place.

Lou Sandrell and Jane Lyons are visiting from Sarasota, Fla. They've had four days of gluttony in the city. And they say they have absolutely no problem eating their fill of Louisiana seafood -- eating oysters, shrimp, etouffee.

But restaurants are bracing for a backlash. One owner heard about a restaurant in Illinois that is telling customers it doesn't serve Louisiana seafood anymore.

And that, says Ewell Smith of the Louisiana Seafood Promotion and Marketing Board, is the heart of the issue they're dealing with.

The seafood at this point is completely safe and it's been inspected and it wouldn't be out in the restaurant chains or anywhere for sale if it wasn't safe.

"The biggest challenge we're facing right now is a perception challenge at this point in time," he says.

Smith has been in meetings ever since oil began gushing from a blown-out well in the Gulf of Mexico more than a month ago. He stresses that supply may suffer eventually, but anything that might be unsafe is kept off Louisiana tables.

"Continue to ask for Louisiana seafood -- no restaurant is going to put bad food on a plate," he says.

Safety inspectors agree. Bill Mahan from the Florida Sea Grant program says authorities have added more inspections and precautions so it can assure the eating public the food is safe.

"The seafood at this point is completely safe and it's been inspected and it wouldn't be out in the restaurant chains or anywhere for sale if it wasn't safe," Mahan says.

But Smith from Louisiana's Seafood Board says he still has selling to do. Some money from BP to the state -- around $40 million right now -- will go toward a tourism campaign to help Louisiana's $2.4 billion seafood industry stay afloat.

The state, he says, is the No. 1 producer of shrimp, oysters and crawfish, and it ships supplies to 30 percent of the country. But the biggest problem is that the oil continues to flow.

"If they don't cap this thing soon -- the longer this drags on -- the harder that perception is going to be to overcome that we have safe seafood," he says.

"As the day goes by, I must ask a hundred people all day long, 'Have we plugged the hole yet?' And it's just a huge disappointment," the New Orleans restaurant owner says.

He says some customers ask whether the food is safe to eat. But once they've received assurances, they feel comfortable enough to order seafood. That doesn't stop wild rumors from potential visitors with a shaky grasp of geography.

"We had a call the other day and the lady was asking if the oil was on the beach in New Orleans," Brennan says.

Other restaurants are enlisting lawyers to sue BP. George Cortello, from the famous Franky & Johnny's seafood restaurant, calls its suit a protective measure.

" 'Cause no one knows what's going to happen. We're just putting our ducks in a row and if it gets worse and if we suffer considerable losses, then we have to go to BP to try get them to make everybody whole," he says.

BP is already compensating fishermen who can no longer use waters tainted by the oil. But right now, most restaurants say business is as brisk as ever. They just hope it stays that way.